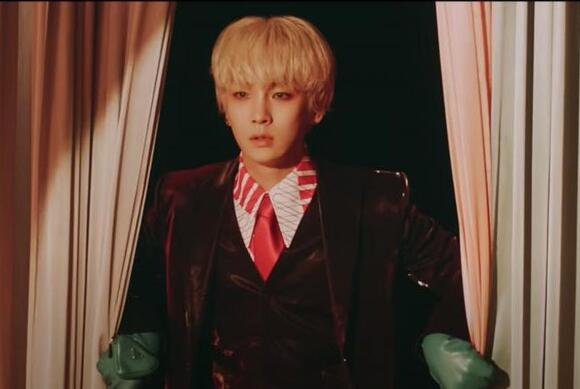 The 30-year-old K-pop star, a member of the boy band SHINee, released a preview Friday of his video for the song "Bad Love."

The teaser shows Key play an actor who acts out during a TV interview. He is also seen navigating a spaceship and taking the stage in front of a group of backup dancers.

"Bad Love" is the title track from Key's debut Korean solo EP of the same name. Key will release the mini album and the full "Bad Love" music video Monday.

Key released his debut solo album, Face, in November 2018 and the Japanese EP Hologram the next month.

Key came to fame with SHINee, which also consists of Onew, Minho and Taemin. The group released its seventh studio album, Don't Call Me, in February.

Oct. 21 (UPI) -- Olivia Rodrigo is back with a new music video. The 18-year-old singer and actress released a video Thursday for the song "Traitor." The "Traitor" video shows Rodrigo and a group of friends trespass on school grounds, where they take a swim in the school pool. Rodrigo sings an ex who moved on with somone else right after a breakup.
MUSIC・4 DAYS AGO
allkpop.com

Singer and producer Chancellor continues to prepare for the release of his upcoming album 'Chancellor,' which includes the title track "Midnight." On October 12 at midnight KST, the singer dropped another music video teaser for "Midnight" featuring a few familiar celebrities. In the music video, Chancellor also shows off his dance moves with these celebrity guests.
MUSIC・14 DAYS AGO
NME

SHINee member and K-pop soloist Key has unveiled his cover of Lizzo’s breakout 2019 single ‘Juice’. During the October 8 episode of South Korean talk show Yoo Heeyeol’s Sketchbook, Key appeared as a guest to promote his recent mini-album ‘Bad Love’. The six-track record, alongside its lead single of the same name had dropped late last month.
CELEBRITIES・14 DAYS AGO
respect-mag.com

Oct. 19 (UPI) -- South Korean boy band Seventeen is giving a glimpse of its new music video. The K-pop group released a preview Tuesday of its video for the song "Rock with You." The teaser shows the members of Seventeen look to the stars through a large telescope and...
WORLD・6 DAYS AGO
HollywoodLife

In a ‘fearless, empowered, and independent’ visual extravaganza, global pop singer Noa Kriel weaves a captivating tale about ‘how other people see you in their minds,’ and how perception can be deceiving. Noa Kriel’s newest video has a little bit of everything: euphoria-inducing chemicals; a giant crane game, where she’s...
MUSIC・9 DAYS AGO
allkpop.com

KINGDOM will be returning soon as the boys release a music video teaser for "Black Crown." KINGDOM will be coming back with a new mini-album this month and has been releasing various concept photos for their comeback. They released individual photos of the members in which they radiate their charisma.
MUSIC・12 DAYS AGO
kpopstarz.com

Deep Purple recently released a cover of Love‘s classic 1966 garage-rock song “7 and 7 Is” as the first single from their upcoming studio album, Turning to Crime. Now the veteran U.K. hard-rockers have debuted a music video for the tune. The clip, which you can watch at the earMUSIC...
MUSIC・7 DAYS AGO
International Business Times

Blackpink's Jisoo is appearing in her first acting role in the drama "Snowdrop" and fans went crazy on Twitter after its teaser clip was released by South Korean television network JTBC. Jisoo trended on Twitter Thursday as soon as eager fans saw the trailer. Most fans expressed excitement over the...
CELEBRITIES・10 DAYS AGO
KGO

HOLLYWOOD -- The "Queens" are ready to take their throne in primetime. The new ABC music-filled series introduces us to a top selling female hip-hop group, 22 years after they were at the top of their game. Brandy, Eve, Naturi Naughton and Nadine Velazquez star in "Queens," a look at...
CELEBRITIES・6 DAYS AGO
Soompi

A new teaser has been revealed for “The Red Sleeve Cuff”!. Based on a novel, “The Red Sleeve Cuff” is a traditional historical drama that tells the record of an imperial court romance between court lady Seong Deok Im (Lee Se Young), who wanted to protect the life she had chosen, and emperor Yi San (2PM’s Junho), who put the nation first before love.
CELEBRITIES・4 DAYS AGO

Oct. 25 (UPI) -- South Korean boy band NCT 127 is back with new music. The K-pop group released the album Favorite and a video for the song "Favorite (Vampire)" on Monday. The "Favorite (Vampire)" video shows the members of NCT 127 play vampires as they sing about a dangerous love they can't stay away from.
MUSIC・2 HOURS AGO
allkpop.com

As previously announced, Super Junior's Donghae and Eunhyuk will be dropping two solo pre-release singles, ahead of D&E's upcoming 1st full album 'Countdown'. Ahead of the release of 'Countdown' later this month, Donghae will be releasing his pre-release single 'California Love' featuring NCT's Jeno. Jeno has been known for being a good friend of Donghae, and they plan to show off their chemistry in this upcoming digital single. Check out 6 teaser images Donghae revealed on October 11 at 10 AM KST.
MUSIC・14 DAYS AGO
The Guardian

Even if you’re not into his lumpen folk-rock polemics, this documentary and concert film goes a long way to explaining Dublin singer-songwriter Damien Dempsey’s unshakeable home-crowd following, and why – as we see at the beginning of Ross Killeen’s reflective film – he is able to pack out a series of gigs every Christmas. Dempsey’s story makes a fine case for music as personal balm, but juxtaposing it with three of his fans’ personal histories deepens the scope of his art into a true act of public communion and shared healing. At least, if the deluge of tears streaming down concertgoers’ cheeks here is anything to go by.
MUSIC・7 HOURS AGO
uatrav.com

This weekend’s new music releases feature a show-stopping, honest single from Adele, a heartbreaker from Coldplay and Selena Gomez, an album celebrating self-love by Remi Wolf and another featuring themes of trauma and anxiety from Young Thug. British singer-songwriter Adele released “Easy On Me” this weekend in preparation for the...
MUSIC・8 DAYS AGO
radiokmzn.com

STING SHARES NEW MUSIC VIDEO FOR 'IF IT'S LOVE'

Sting recently released a new music video for “If It’s Love,” a song off his forthcoming album, The Bridge, due out on November 19 via A&M/Interscope/Cherrytree Records. The breezy tune, which is now available on all digital platforms, exhibits Sting’s undeniable gift for melody. Lukas McFarlane directed the video, which...
MUSIC・6 DAYS AGO
Soompi

The first teaser has been released for “Snowdrop”!. Set in 1987 Seoul, the upcoming JTBC drama tells the emotional love story of university students Su Ho and Young Ro. Jung Hae In plays elite university student Su Ho, who suddenly appears at a women’s university dorm in a bloody state one day, while BLACKPINK’s Jisoo is Young Ro, a student at the women’s university who hides him and takes care of his wounds while facing danger under close surveillance.
WORLD・11 DAYS AGO
Page Six

Just call her Megan Thee Hellraiser. The “Savage” rapper, 26, revealed an over-the-top Halloween costume on Sunday, sporting a totally bald and painted-white head as Pinhead from “Hellraiser.”. “Pain has a face. Allow me to show you. Gentlemen I am pain,” she captioned images of her transformation alongside shots of...
CELEBRITIES・5 HOURS AGO