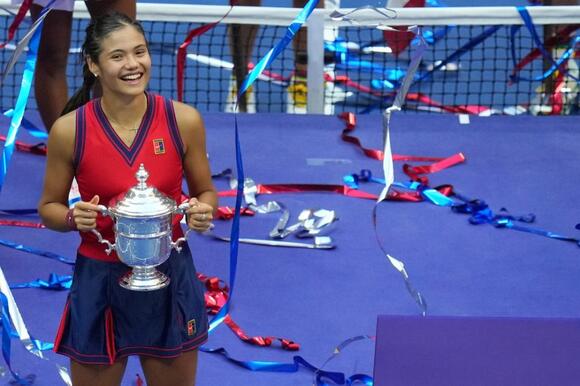 U.S. Open champion Emma Raducanu and her coach have parted ways, with the 18-year-old saying Friday she wants to work with someone more experienced as her profile grows on the WTA Tour.

Raducanu, from Great Britain, won the U.S. Open on Sept. 11 as a qualifier, defeating Canadian Leylah Fernandez in the final.

To prepare for the tournament, she worked with Andrew Richardson, who coached her for two years on the youth circuit and rejoined her team in July on a short-term basis. She previously split with coach Nigel Sears, who is the father-in-law of Andy Murray.

“I’m looking for someone who has been at that level and knows what it takes,” Raducanu said.

“And especially right now because I’m so new to it, I really need someone to guide me who’s already been through that.” 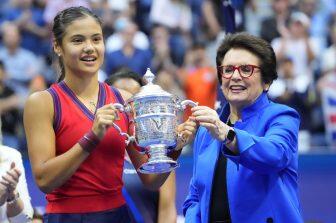 She told reporters that parting with Richardson was hard. Richardson played on Britain’s Davis Cup team but isn’t part of the inner circle of the WTA Tour.

“It’s tough to have that conversation with anyone, but I think for me like that’s just really what I need,” she told reporters.

Raducanu rose to No. 22 in the world after her career-first win in New York. She said she won’t rush a decision about her coach.

Friday was a big day for Raducanu. She also played doubles with Kate Middleton, the duchess of Cambridge, at the National Tennis Centre in London.

“Her forehand is incredible,” Raducanu said of her partner. 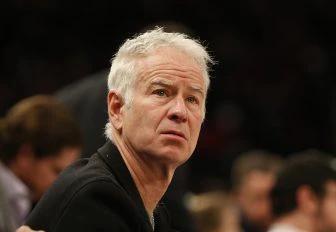 Carlos Rodriguez has emerged as the favourite to become Emma Raducanu’s next coach, Telegraph Sport understands, as recruitment for the US Open champion’s team begins to take shape. Raducanu insisted last week that she would wait for the right candidate to emerge. But it is thought that Rodriguez, who coached...
TENNIS・9 DAYS AGO
Tennis World Usa

Tennis coach Michael Joyce was shocked to see Emma Raducanu splitting with her coach Andrew Richardson following her win at the US Open. After winning 10 matches to become the first qualifier in tennis history to win a Grand Slam, Raducanu split with her coach Richardson because she wanted a more experienced coach.
TENNIS・2 DAYS AGO
Tennis World Usa

Emma Raducanu, 18, absolutely enjoyed returning to the hotel following her US Open victory and just sitting with her team, enjoying a nice meal and reflecting on the three weeks they had at Flushing Meadows. Raducanu, who was ranked at No. 150 at the time, won three qualifying matches and...
TENNIS・10 DAYS AGO
Daily Mail

Coaching Emma Raducanu will be one of the TOUGHEST jobs in tennis, claims Maria Sharapova's old mentor... after fairytale US Open win creating sky-high expectations around the British star

Coaching Emma Raducanu could prove to be one of the most difficult jobs in tennis despite her fairytale US Open triumph, according to the man who masterminded Maria Sharapova's sensational rise. British star Raducanu, 18, won the first Grand Slam of her career in New York last month but then...
TENNIS・3 DAYS AGO

Emma Raducanu set to feature at the upcoming Linz Open 2021

World No. 22 Emma Raducanu confirms her participation in the final tournament of the 2021 season, the Linz Open in Austria. The Linz Open 2021 will be the final WTA-250 tournament while also being the last week of action on the WTA Tour before the 2021 WTA Finals which are scheduled in Guadalajara, Mexico.
TENNIS・12 DAYS AGO
Telegraph

Emma Raducanu is not going to be rushed into appointing a new coach, she said on Tuesday, despite being seen alongside the experienced former British No1 Jeremy Bates in Indian Wells this week. Raducanu is in California to play her first tournament since she won the US Open just over...
TENNIS・12 DAYS AGO
740thefan.com

(Reuters) – Red carpet galas, top-tier endorsement deals and hitting with British Royalty — the past three weeks have been a whirlwind for 18-year-old U.S. Open champion Emma Raducanu. But now the British sensation says she is eager to get back to business. “I’d say it has been a very...
TENNIS・12 DAYS AGO
newschain

US Open champion Emma Raducanu to play in Austria next month

Emma Raducanu has added another tournament to her busy autumn schedule. The US Open champion, who will play her first tournament since her stunning New York triumph at the BNP Paribas Open in Indian Wells this week, has entered the Upper Austria Ladies Linz next month. Having taken three weeks...
TENNIS・13 DAYS AGO

Stay humble, remain grateful and learn how to say no is the advice from two people who have a very good idea what it feels like to be Emma Raducanu right now. One month shy of her 19th birthday, Raducanu is about to play her first match as the US Open champion.
TENNIS・9 DAYS AGO
BBC

Friday at the BNP Paribas Open was all about second-round action, as a lot of top players took the court for the first time after byes. Iga Swiatek and Simona Halep victoriously started their campaigns at Indian Wells. US Open champion Emma Raducanu was eliminated in straight sets, while US Open runner-up Leylah Fernandez dropped just four games to advance.
SPORTS・8 DAYS AGO
firstsportz.com

Emma Raducanu took the world by storm when she thrashed all her opponents to win the US Open 2021 title. Who came in at World No. 150 in the final grand slam of the season, was ranked World No. 22 after the title win. Evidently, the world was expecting her to deliver similar performance at the Indian Wells Open.
TENNIS・6 DAYS AGO

Emma Raducanu: US Open champion 'hungry' for more as she prepares for Indian Wells opener against Aliaksandra Sasnovich

Raducanu has spent the last three weeks reflecting on her stunning achievement at the US Open which saw her go from a young hopeful to one of the biggest names in women's tennis. The 18-year-old became the first qualifier ever to win a Grand Slam title - winning 10 matches...
TENNIS・10 DAYS AGO
The Independent

Emma Raducanu may be the name on everyone’s lips at Indian Wells but the US Open champion vowed not to put pressure on herself as she prepares to return to action.The 18-year-old’s incredible triumph in New York catapulted her from young hopeful to one of the biggest names in women’s tennis and there will be a huge amount of attention when she plays her first match since the Flushing Meadows final at the BNP Paribas Open later this week.As the 17th seed, Raducanu has a bye in the first round, so her opening match will be against either fellow teenager...
TENNIS・11 DAYS AGO
USA Today

U.S. Open champion Emma Raducanu found out the hard way Friday night in Indian Wells the difference between being the hunted and being the hunter. The 18-year-old Brit, who took the world by storm with her historic march to the title in New York, was defeated in her first match since then, a stunning 6-2, 6-4 loss to Aliaksandra Sasnovich of Belarus in the opening round of the BNP Paribas Open.
TENNIS・8 DAYS AGO
USA TODAY

Emma Raducanu, appearing in the PNB Paribas Open, checks a lot of the same boxes as Naomi Osaka, who made $55 million last year in off-court earnings.
TENNIS・9 DAYS AGO
Telegraph

Emma Raducanu’s straight-sets defeat on Friday night will have come as no surprise to anyone who studies tennis history. There are isolated examples of players winning their next tournament after a maiden grand-slam title – Victoria Azarenka and Ashleigh Barty included – but most newly minted champions take longer to adjust.
TENNIS・8 DAYS AGO
SkySports

Emma Raducanu: The Briton's return to the court after her US Open triumph ends in defeat at Indian Wells

It has been 27 days since the 18-year-old stunned the world to become the queen of New York in a fairytale story, but she could not reproduce that level in the Californian desert, going down to the Belarussian world No 100. Raducanu was given the headline slot in the Friday...
TENNIS・8 DAYS AGO
BBC

US Open champion Emma Raducanu has withdrawn from the upcoming Kremlin Cup in Moscow. The British 18-year-old has played just once since becoming a Grand Slam champion, losing to Belarus' Aliaksandra Sasnovich at Indian Wells earlier in October. She is still scheduled to play in Romania and Austria later this...
NFL・3 DAYS AGO
Tennis World Usa

Michael Joyce, former coach of Russia's tennis star Maria Sharapova (who left tennis at the beginning of the last season), is very skeptical of Emma Raducanu's decision to split from her coach Andrew Richardson, the week after her historical triumph at the US Open, the last Grand Slam tournament of 2021.
TENNIS・12 HOURS AGO