By Stephen Nellis
Reuters
22 days ago 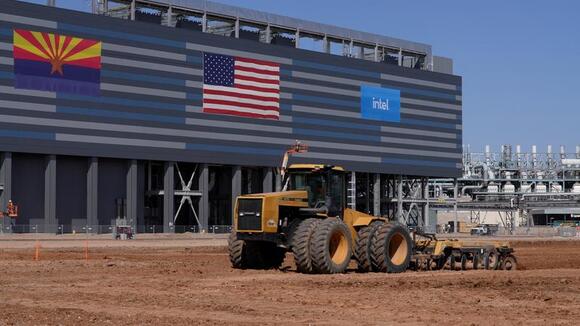 (Reuters) - Intel Corp on Friday broke ground on two new factories in Arizona as part of its turnaround plan to become a major manufacturer of chips for outside customers.

The $20 billion plants - dubbed Fab 52 and Fab 62 - will bring the total number of Intel factories at its campus in Chandler, Arizona, to six. They will house Intel’s most advanced chipmaking technology and play a central role in the Santa Clara, California-based company’s effort to regain its lead in making the smallest, fastest chips by 2025, after having fallen behind rival Taiwan Semiconductor Manufacturing Co Ltd.

The new Arizona plants will also be the first Intel has built from the ground up with space reserved for outside customers. Intel has long made its own chips, but its turnaround plan calls for taking on work for outsiders such as Qualcomm Inc Amazon.com’s cloud unit, as well as deepening its manufacturing relationship with the U.S. military.

“We want to have more resilience to the supply chain,” Intel Chief Executive Pat Gelsinger, who earlier in the week attended a White House meeting on the global chip shortage, told Reuters in an interview. “As the only company on U.S. soil that can do the most advanced lithography processes in the world, we are going to step up in a big way.”

Gelsinger said it was too early to say how much of the new plants’ capacity would be reserved for outside customers. He said the plants would produce “thousands” of wafers per week.

Wafers are the silicon discs on which chips are made, and each can hold hundreds or even thousands of chips.

Gelsinger said Intel plans to announce another U.S. campus site before the end of the year that will eventually hold eight chip factories.

AZ will become the hub for the best silicon manufacturing in the entire world. if you need a future job or want to be rich then get a degree in this field. You don't want to be a fab employee, you want to be a fab leader

I left Intel in the past to work for AstraZeneca back in the day... working for the government now is 🙁. Will put in for Intel and hopefully - 雅虎!!!

Taiwan Semiconductor Manufacturing Corp. confirmed Friday it is planning to build a computer chip factory in Japan TSMC’s CEO C.C. Wei said the company, the world’s biggest contract producer of semiconductors, was expanding to better serve its customers and enhance its competitive advantage. “After conducting due diligence, we announce our intention to build a specialty technology fab plant in Japan, subject to our board of directors' approval," We said. He said the project has a “strong commitment” from both TSMC’s customers and the Japanese government, he said. Earlier this year, TSMC announced plans to invest $100 billion in the...
BUSINESS・2 DAYS AGO
notebookcheck.net

Sony and TSMC are said to be in discussion to open a new semiconductor factory in Japan. The new plant would produce chips for cameras, cars and other purposes and could help stabilize chip supplies. The global chip shortage and other global stability issues could be behind a proposed joint...
BUSINESS・5 DAYS AGO
Reuters

JAKARTA, Oct 12 (Reuters) - American mining giant Freeport McMoRan broke ground on Tuesday in construction of one of the world’s biggest copper smelters near its existing refining operations in Indonesia. The $3 billion facility in Gresik, East Java, will have capacity of 1.7 million tonnes of copper concentrate and...
ENERGY INDUSTRY・5 DAYS AGO
Reuters

(Reuters) - The center of gravity for U.S. auto manufacturing is moving south, with electric vehicle and battery makers planning to spend nearly $24 billion in new factories from Arizona to Georgia. Already announced are the following plants and investments:. ARIZONA. Startup Lucid Motors has just opened a $300 million...
BUSINESS・8 DAYS AGO

Brexit May Have Cost the UK an Intel Factory

Intel has ruled out the possibility of building a factory in the UK, thanks to Brexit. Chipmakers and governments are looking to expand semiconductor production outside of Asia. The COVID-19 pandemic demonstrated the danger of having the bulk of the world’s chip supplies coming from a single region. As early lockdowns impacted production, companies around the world struggled to meet demand for laptops, tablets and phones. Multiple industries are still dealing with a semiconductor shortage that had its start in those initial weeks.
ECONOMY・8 DAYS AGO
Business Insider

Intel's CEO said the firm isn't considering building factories in the UK because of Brexit. Pat Gelsinger told the BBC that Intel was instead focusing on EU locations. Boris Johnson is overseeing a 'levelling down of foreign direct investment', critics say. Intel would no longer consider building semiconductor factories in...
BUSINESS・9 DAYS AGO
mobileworldlive.com

Intel CEO Pat Gelsinger will no longer consider the UK as a potential site for establishing a chip factory following the nation’s withdrawal from the European Union (EU), with the chipmaker shifting focus to investment options covering bloc members instead. Gelsinger told the BBC the company has now set its...
BUSINESS・9 DAYS AGO
theregister.com

Intel is cutting the UK out of its European expansion plans based on the nation's decision to leave the EU, the world's biggest political and trading bloc. While the government voices ambitions for a high-value tech-based economy, Chipzilla has other plans. Intel CEO Pat Gelsinger told the BBC this morning...
BUSINESS・9 DAYS AGO

Intel boss Pat Gelsinger has announced in an interview with the BBC that a potential new chip fab will no longer be built in Britain citing Brexit as the reason for the decision. Instead it looks as though a European country will host Intel's fab. Before the United Kingdom made...
ECONOMY・9 DAYS AGO
wccftech.com

Pat Gelsinger, Intel CEO, repeated statements about Intel's plans to create a $93 billion semiconductor manufacturing section, located in Europe. The plan will be in development for upwards of ten years. This information was reiterated during his talks at the IAA Mobility Auto Show, located in Munich, Germany. Gelsinger states...
BUSINESS・10 DAYS AGO
theiet.org

Intel CEO Pat Gelsinger has told the BBC that the company is no longer considering building a chipmaking factory in the UK, following its exit from the EU. The company, one of the world’s largest semiconductor manufacturers, is currently pushing to boost its own chipmaking output amid a global shortage.
BUSINESS・10 DAYS AGO
roi-nj.com

Ferrero North America, the Parsippany-based confectionery company, has broken ground on its first chocolate processing facility outside of Europe, it announced this week. The new facility, in Bloomington, Illinois, represents the global company Ferrero Group’s third chocolate processing site overall, it said in a news release. The $75 million project is a 70,000-square-foot expansion of the existing Bloomington manufacturing center.
INDUSTRY・1 DAY AGO

Such a capability could potentially allow China to execute a nuclear strike on any target on earth with near-impunity and very little warning. A report from Financial Times' Demetri Sevastopulo and Kathrin Hille states that China has tested a nuclear-capable hypersonic glide vehicle that goes into space and traverses the globe in an orbital-like fashion before making its run through the atmosphere toward its target. There would be huge implications if such a system were to be operationalized, and according to this story, which says it talked to five officials confirming the test, the U.S. government was caught totally off-guard by it.
MILITARY・8 HOURS AGO
Business Insider

3 astronauts arrived at China's new space station, which it's building as it's banned from the International Space Station

Chinese astronauts were banned from the International Space Station (ISS) in 2011 by US lawmakers.
AEROSPACE & DEFENSE・20 HOURS AGO
WashingtonExaminer

China surprised U.S. officials by testing a new hypersonic missile in August that went around the globe before it made its way toward the intended target, according to a report.
MILITARY・9 HOURS AGO
Business Insider

China has at least 65 million empty homes - enough to house the population of France. It offers a glimpse into the country's massive housing-market problem.

In the US and Japan, abandoned homes have earned cities the titles of "ghost towns." But China's are different - they're not abandoned, just empty.
ECONOMY・2 DAYS AGO
USA TODAY

Experts say the president doesn’t have the authority to make such an order regardless.
PUBLIC HEALTH・1 DAY AGO
Business Insider

NASA advisor quits after the agency keeps a $10 billion telescope named after James Webb, who was a senior State Department official during the persecution of gay and lesbian government employees

More than 1,200 people, including NASA advisor Lucianne Walkowicz, signed an open petition calling for the James Webb space telescope to be renamed.
AEROSPACE & DEFENSE・1 DAY AGO