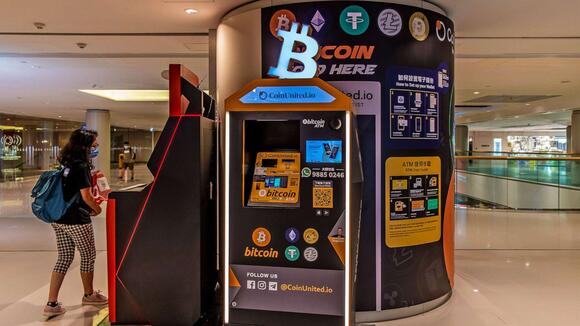 Bitcoin, Ethereum and other cryptocurrencies dipped in value on Friday after China declared all transactions involving these digital currencies "illegal."

China's central bank, the People's Bank of China, issued a statement on Friday saying that use of these virtual currencies is disrupting economic order and linked to money laundering, fraud and other illicit activities. While Chinese financial institutions already were banned from doing business with cryptocurrencies, the new statement made clear that cryptocurrencies do not have the same status as legal tender and cannot be used as currency in the marketplace.

MORE: What to know about Evergande, the Chinese property developer dragging down global markets

Bitcoin dropped some 8% on the news, but recouped some initial losses and was down by some 5% late Friday morning. Ethereum initially shed more than 10%, but was down by some 7% as of 11:30 am ET, according to Coin Desk data.

The notoriously volatile digital currencies are down about 30% from all-time highs in the spring, but Bitcoin still is up some 40% since the start of the year and Ethereum has gained a whopping 290% in 2021.

Friday's notice from Beijing also made clear that it's illegal for overseas virtual currency exchanges to provide services to Chinese residents through the internet.

The announcement comes as China experiments on a small scale with its own digital currency issued by its central bank, the first to be created by a major economy. The digital yuan is expected to be rolled out at larger scale imminently, and while it has many similarities to current cryptos the major difference is that it can be more easily traced and controlled by the government.

U.S. financial markets held steady on the news, with the Dow Jones Industrial Average and the S&P 500 both opening relatively flat on Friday. Analysts and investors around the globe have been keeping a close eye on news out of China, however, amid silence on the Evergrande saga . Debt issues plaguing Evergrande, one of China's largest real estate developers, sent global markets tumbling earlier in the week as many predicted a default with possible spillover effects to the larger economy.

next to be outlawed by Communist China will be privately owned property. Stop investing in China!!

US warns that Chinese government is using 'wide variety' of methods, some illegal, to steal trade secrets

The Chinese government’s aggressive push to dominate emerging technology such as artificial intelligence, quantum computing, and biotechnology make Beijing the “primary strategic competitor” to the U.S., the National Counterintelligence and Security Center said in a notice published Friday. The threat from the Chinese government with respect to these technologies is...
1 DAY AGO
zycrypto.com

The CEO of one of the US biggest exchange and trading platforms, Robinhood, has disclosed that the company now has over 1 million people waiting on the release of its native digital wallet. Vlad Tenev made this disclosure on Thursday to CNBC at its Disruptor 50 summit, where he equally...
MARKETS・14 HOURS AGO
GOBankingRates

There are plenty of alternatives to Bitcoin and other big-name cryptocurrencies. If you’re ready to invest in some crypto, consider these affordable options.
MARKETS・18 HOURS AGO
GOBankingRates

It’s important to know what you’re getting into before you buy into cryptocurrency. Find out how these top picks compare and what to consider before investing.
STOCKS・22 HOURS AGO

A formal move to green-light crypto trading by banks would probably be met with resistance by advocates of tough financial rules.
POTUS・16 HOURS AGO
moneyweek.com

Can anything stop rising inflation? asks Daniel Moss on Bloomberg. How about a Chinese slowdown? The world’s second-biggest economy grew at a record 18.3% year-on-year in the first quarter of the year but has slowed sharply. GDP rose by an annual 4.9% in the third quarter, the slowest pace in a year and down from the 7.9% rate recorded between April and June, says Katie Silver for the BBC. Soaring commodity prices have seen many provinces impose electricity rationing, which is weighing on industries such as cement, steel and aluminium smelting.
BUSINESS・2 DAYS AGO
deseret.com

Chinese authorities have signaled they would start looking into the recent price spikes and subsequent plunge in the domestic coal futures market as part of efforts to contain the price of coal amid a power crunch. China will severely punish market violations in coal futures trading and pricing, the National...
ENERGY INDUSTRY・1 DAY AGO

The COVID-19 recession may have gotten you thinking about how to preserve your wealth. Many investors consider store-of-value assets like Bitcoin and gold as ways to preserve wealth. For example, gold has thousands of years behind it as a universally … Continue reading → The post Bitcoin vs. Gold: Which Should You Buy? appeared first on SmartAsset Blog.
ECONOMY・2 DAYS AGO
The Independent

A troubled Chinese developer whose struggle to avoid a multibillion-dollar debt default has rattled global financial markets wired $83.5 million on Friday to make an overdue payment to foreign bondholders, a government newspaper reported.Evergrande Group's struggle to reduce its 2 trillion yuan ($310 billion) of debt to comply with tighter official curbs on borrowing has prompted fears a default might trigger a financial crisis. Chinese officials have tried to ally investor fears by saying the debt problems can be controlled and there should be no impact on the financial industry.Evergrande wired money on Friday to a Citigroup account for...
ECONOMY・2 DAYS AGO
tucsonpost.com

Seoul [South Korea], October 18 (ANI/Global Economic): Despite the impact of China's crackdown on K-pop fandom, the K-pop physical album market has continued to grow. According to the Gaon Chart on the 15th, cumulative sales of top 400 albums reached 43 million copies from January to September this year. Even though sales in the fourth quarter have not yet been added up, it has already surpassed last year's sales, which surpassed exceeded 40 million copies for the first time in history.
MUSIC・6 DAYS AGO
investing.com

Get your daily, bite-sized digest of cryptoasset and blockchain-related news – investigating the stories flying under the radar of today’s crypto news. The US Commodity Futures Trading Commission (CFTC) said it has issued an order simultaneously filing and settling charges against Tether Holdings Limited, Tether Limited, Tether Operations Limited, and Tether International Limited (d/b/a Tether) for making untrue or misleading statements and omissions of material fact in connection with the most popular stablecoin, tether (USDT). The order requires Tether to pay a civil monetary penalty of USD 41m. Also, the CFTC issued a separate order simultaneously filing and settling charges against iFinex Inc., BFXNA Inc., and BFXWW Inc. (d/b/a Bitfinex) in connection with their operation of the Bitfinex crypto trading platform. The order finds Bitfinex engaged in illegal, off-exchange retail commodity transactions in digital assets with US persons on the trading platform and operated as a futures commission merchant (FCM) without registering as required. The order requires Bitfinex to pay a USD 1.5m civil monetary penalty.
MARKETS・8 DAYS AGO
CNBC

China's tech crackdown continues, Microsoft to shut down its version of LinkedIn in China

Eunice Yoon joins The Exchange from Beijing, where she reports on a new privacy law that's driving certain stocks down. Additionally, she discusses the effect of Microsoft pulling Linkedin out of China.
TECHNOLOGY・9 DAYS AGO
Interesting Engineering

Putin May Accept Cryptocurrencies as Payment In Future Transactions

Russian President Vladimir Putin is making the headlines in the crypto world this week after he tentatively acknowledged that cryptocurrencies have value, but that it's still too early to tell given their "unstable" nature. In the future, they could be accepted as a legitimate form of payment, but it's still...
MARKETS・9 DAYS AGO
Reuters

SHANGHAI, Oct 11 (Reuters) - China's National Medical Products Administration said on Monday that it had launched a crackdown on online and offline sales of illegal cosmetics. The regulator said on its website that it would inspect medical claims made by cosmetic products and clean up sales of unregistered cosmetic products.
CHINA・12 DAYS AGO
gobankingrates.com

Coinbase is an online platform where you can buy, sell, store and transfer your cryptocurrency. Its mission is to facilitate an open financial system and help users convert digital currency to and from their local fiat currency. Being a legitimate broker and cryptocurrency exchange, Coinbase attracts many high-profile investors. While...
MARKETS・12 DAYS AGO
theedgemarkets.com

(Oct 12): Arthur Cheong, who worked in oil trading before reinventing himself as a crypto fund manager, put money into a blockchain-based game called Axie Infinity last year. The so-called play-to-earn game, where users can earn digital currency by taking part, was raising US$864,000 through a private sale of its tokens. They cost 8 cents each at the time. They were worth about US$124 as of Friday in Asia, according to CoinMarketCap.com, which translates into a gain of more than 150,000%.
MARKETS・12 DAYS AGO
investing.com

In 2014, Nio (NYSE:NIO) entered the electric vehicle market with its "New-gen Smart Vehicles." This Shanghai-based automobile manufacturer went public on the NYSE in 2018 under the ticker symbol NIO. Today, it is a leading electric vehicle manufacturer in China. NIO stock soared to fresh all-time highs in late-January, rising...
ECONOMY・12 DAYS AGO