By Sam Cooper
Insider
24 days ago 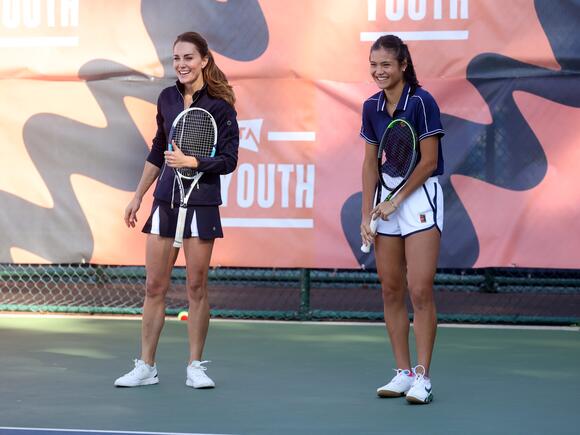 US Open champion Emma Raducanu has been living her best life since her fairytale victory in New York.

The teenage sensation shocked the world to win the prestigious Grand Slam, having started the tournament in the qualifying rounds.

She began her celebrations with a sushi feast and was joined by former men's British number one Tim Henman, who she said was an inspiration.

"After Emma had done all her commitments and photos we all climbed into a minibus. Someone put on Sweet Caroline and I've got this great video on my phone of everyone singing along to it.

"We reminisced and talked about everything that has happened in the past few weeks. I don't think I left until 4.45am, it was such a happy occasion and everyone really enjoyed themselves," Henman told the Daily Mail.

Raducanu was given $2.5 million in prize money but instead of splashing the cash on an expensive car, a new house or a vacation, her first purchase was a replacement of something she'd lost earlier in the tournament: $200 Apple AirPods.

In an interview with ESPN, Raducanu said: "There's a running joke in my team because before my first-round qualifying match I lost my AirPods and I was basically running around the changing room like three minutes before my call to go on trying to find it, but I lost it.

Having regained the ability to listen to music on the move, she went for a stroll on the streets of New York where she took a selfie of a huge billboard with her face on it.

"Sightseeing in ny. Never thought I would see this… coolest thing," she said in an Instagram post.

Raducanu has many admirers, but one that would have been special to the Brit was a letter from Queen Elizabeth II.

"I send my congratulations to you on your success in winning the United States Open Tennis Championships. It is a remarkable achievement at such a young age, and is testament to your hard work and dedication," the Queen said in a letter.

Raducanu said the Queen is "such a great inspiration and role model for the whole country" and she told the BBC that she might have to "frame that letter."

Next for the tennis star was a trip to the Metropolitan Museum of Art for the Met Gala .

Raducanu was among fellow sporting stars Simone Biles, Suni Lee and Lewis Hamilton, where she wore a black and white Chanel dress.

Another stop on her tour of the Big Apple was the New York Stock Exchange. Raducanu's parents both work in finance, and she spoke of her excitement to see where the action happens in world markets.

"I am on cloud nine but so excited to be here on the New York Stock Exchange. It was one of the places on my bucket list before leaving New York and I'm just so excited and grateful to everyone who made this possible," Raducanu told CNBC's Closing Bell programme.

On returning to the UK, Raducanu continued her celebrations, attending an event at London Fashion Week, where she met the youngest-ever Nobel Peace Prize winner Malala Yousafzai, and signing a deal to become a brand ambassador for Tiffany & Co.

Continuing the royal theme of her celebrations, Raducanu on Friday played tennis with Catherine, Duchess of Cambridge at the LTA's National Tennis Centre.

The duchess, a huge tennis fan, appeared as part of "The Homecoming," an event to commemorate Raducanu's return to England.

Coaching Emma Raducanu will be one of the TOUGHEST jobs in tennis, claims Maria Sharapova's old mentor... after fairytale US Open win creating sky-high expectations around the British star

Coaching Emma Raducanu could prove to be one of the most difficult jobs in tennis despite her fairytale US Open triumph, according to the man who masterminded Maria Sharapova's sensational rise. British star Raducanu, 18, won the first Grand Slam of her career in New York last month but then...
TENNIS・4 DAYS AGO
SkySports

Emma Raducanu: US Open champion could face a popcorn clash against her idol Simona Halep at Indian Wells

Raducanu's first match since her stunning US Open victory will be a second-round date against either world No 71 Maria Camila Osorio from Colombia or Aliaksandra Sasnovich, the Belarusian world No 100. Now ranked 22, Raducanu will be among the 32 seeds and therefore receive a bye in the first...
TENNIS・14 DAYS AGO
SkySports

The 18-year-old Raducanu, whose triumph at Flushing Meadows made her the first qualifier to capture a Grand Slam title, has gained thousands of new followers on her social media accounts. But Gauff, who shot to fame as a 15-year-old when she reached the fourth round at Wimbledon in 2019, has...
TENNIS・10 DAYS AGO
Tennis World Usa

British tennis star Emma Raducanu has been confirmed for Linz, the tournament announced on Monday. Raducanu, 18, has now signed up to play four tournaments after her stunning US Open victory. Raducanu, who is enjoying a career-high ranking of No. 22 in the world, is set to return to action...
TENNIS・13 DAYS AGO

Emma Raducanu suffered a major defeat in her first match since her US Open victory. The 18-year-old British tennis ace was beaten 6-2 6-4 by Belarusian champ Aliaksandra Sasnovich in Indian Wells, California on Friday night (09.10.21). Raducanu insisted she is not used to playing at nighttime, as she vowed...
INDIAN WELLS, CA・10 DAYS AGO
newschain

Emma Raducanu is hungry for more success as she looks to move on from her US Open victory in Indian Wells. The 18-year-old will play her first match since that fairy-tale run in New York in the early hours of Saturday morning when she takes on Belarusian Aliaksandra Sasnovich in the Californian desert.
TENNIS・11 DAYS AGO
firstsportz.com

British teenage sensation, Emma Raducanu reveals the highlight of her US Open 2021 triumph

British teenage sensation, Emma Raducanu scripted history at US Open 2021, as she became the first ever qualifier to claim the prestigious title. The 18-year-old won 10 consecutive matches to claim the coveted trophy, and did not drop even a single set in the main draw. In her latest venture...
TENNIS・11 DAYS AGO
SkySports

Emma Raducanu: US Open champion 'hungry' for more as she prepares for Indian Wells opener against Aliaksandra Sasnovich

Raducanu has spent the last three weeks reflecting on her stunning achievement at the US Open which saw her go from a young hopeful to one of the biggest names in women's tennis. The 18-year-old became the first qualifier ever to win a Grand Slam title - winning 10 matches...
TENNIS・11 DAYS AGO

Emma Raducanu may be the name on everyone’s lips at Indian Wells but the US Open champion vowed not to put pressure on herself as she prepares to return to action. The 18-year-old’s incredible triumph in New York catapulted her from young hopeful to one of the biggest names in women’s tennis and there will be a huge amount of attention when she plays her first match since the Flushing Meadows final at the BNP Paribas Open later this week.
TENNIS・13 DAYS AGO
SkySports

The US Open champion, who will play her first tournament since her stunning New York triumph this week, is poised for a busy month having taken three weeks off. After Indian Wells, the 18-year-old has entered the Kremlin Cup in Moscow beginning on October 18 and the Transylvania Open in her father's home country of Romania the following week.
TENNIS・14 DAYS AGO
The Independent

Emma Raducanu: What to expect as US Open winner returns to action at Indian Wells

Emma Raducanu will make her return to the match court at the BNP Paribas Open in Indian Wells this week.The US Open champion took some time off to digest her remarkable triumph and is sure to be one of the star attractions in the California desert.Here, we answer the key questions about the tournament.What is the BNP Paribas Open?Look at what we have here 🇬🇧Welcome to #TennisParadise, @EmmaRaducanu 🌴 pic.twitter.com/qO1UzVds0X— BNP Paribas Open (@BNPPARIBASOPEN) October 2, 2021The joint tournament on the WTA and ATP Tour is one of the biggest and most prestigious stops on the calendar outside the grand...
TENNIS・14 DAYS AGO
The Guardian

Emma Raducanu Faced Her First Loss Since the US Open: "I Need to Cut Myself Some Slack"

Emma Raducanu knows that it's just the beginning of her professional journey. After winning the US Open last month, the 18-year-old British player faced her first loss during the second round of the BNP Paribas Open in Indian Wells, CA. On Friday night, Raducanu lost to Aliaksandra Sasnovich of Belarus in straight sets, but when it was time to sit with reporters, she recognized that every tournament is different — the conditions, the time of play, the fans — and she will continue to learn from each match.
TENNIS・9 DAYS AGO
SkySports

The 18-year-old's incredible triumph in New York catapulted her from young hopeful to one of the biggest names in women's tennis and there will be a huge amount of attention when she plays her first match since the Flushing Meadows final at the BNP Paribas Open later this week. As...
TENNIS・13 DAYS AGO
Tennis World Usa

Halep on Emma Raducanu's defeat: "I would have liked to play against her"

Last 22 September, through a post published on her Instagram profile, Simona Halep announced the end of the sports collaboration with Darren Cahill. The Romanian champion, to restart stronger than before, decided to rely on Adrian Marcu, whom she already had as a coach in 2003. During the brief spell,...
TENNIS・7 DAYS AGO
firstsportz.com

“Pretty normal for Emma Raducanu to lose in her opening match at the Indian Wells,” says former British No. 1 Greg Rusedski

Emma Raducanu has been the centre of attention for the entire tennis world and especially of Great Britain ever since her heroics at the 2021 US Open where she won the title without dropping a set having started as a qualifier ranked World No. 150 and post her title, she became the new World No. 22.
TENNIS・6 DAYS AGO
firstsportz.com

‘I’ll be back,’ Emma Raducanu takes a tour around California post her loss at Indian Wells

British star Emma Raducanu made headlines in New York a month ago after she became the first player in tennis history to win a grand slam as a qualifier. She beat fellow teenager Leylah Fernandez in the final to win her maiden grand slam. Astonishingly, she didn’t drop a single set en route her title triumph and became an overnight sensation.
CALIFORNIA STATE・6 DAYS AGO
SkySports

Emma Raducanu's itinerary: When is the US Open champion back in action?

Raducanu's stunning win at this year's US Open catapulted her to worldwide stardom. She did not drop a set in 10 matches en route to the title at Flushing Meadows but she has played only one match since, suffering a second-round defeat to Aliaksandra Sasnovich at the BNP Paribas Open at Indian Wells to head back to the drawing board.
TENNIS・3 DAYS AGO
Daily Mail

Emma Raducanu's stuttering start to life as the US Open champion continued on Thursday night when she pulled out of next week's WTA Kremlin Cup in Moscow. The event which was meant to be the start of a three-week run of indoor tournaments around Europe, rounding off her season. Her...
TENNIS・4 DAYS AGO
HollywoodLife

Melinda Gates and her daughter Jennifer were spotted dressed to impress while arriving at Manhattan’s iconic Plaza Hotel on Wednesday. Melinda Gates, 57, is by her daughter Jennifer Gates‘ side just days before she gets hitched. The doting mom was photographed walking with the 25-year-old beauty, whom she shares with ex-husband Bill Gates, 65, outside of the Plaza Hotel in New York City on Oct. 13. She wore a stylish pink sleeveless mini dress with a matching wrap and heels while the bride-to-be wore a short-sleeved long white lace dress and heels. Check out the pics HERE!
CELEBRITIES・5 DAYS AGO