Case study: Austin is the 'ONLY' option for Californians seeking paradise in Texas

By Sonia Garcia
Austonia
24 days ago 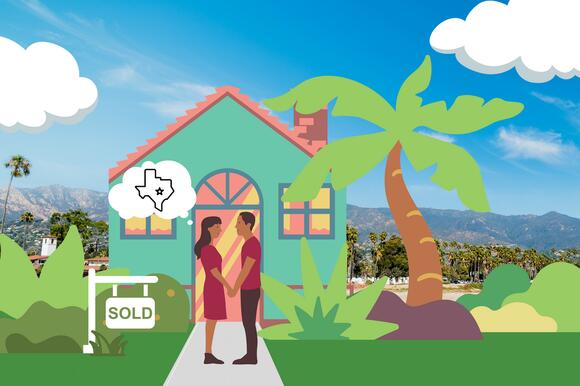 Houston? Dallas? San Antonio? No, it has to be Austin.

We know Californians love Texas, but a recent string of posts on neighborhood platform Nextdoor in Santa Barbara, California, displays what the craze to move to Austin looks like.

When one user posted, " Hi neighbors, I want to buy a house in Houston, Texas any recommendations? " the responses flooded in displaying what the admiration for Austin looks like from the West Coast. Users mostly advised against a move to Houston; one person even wrote, "Austin is the ONLY place to consider!!" 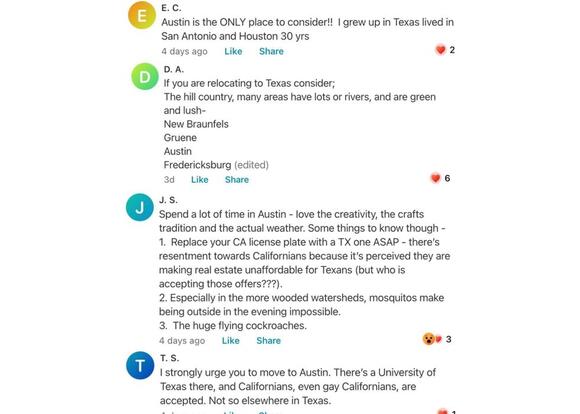 While some defended H-town, saying, "Awesome place to live," one person wrote, "WORST PLACE TO LIVE." Reasons to not move to Houston from Californians' perspective included:

The comments were shifted to Austin's lush greenery, weather and acceptance of gay people.

Over the last five years, Austin has seen more migrants from California than any other state, according to an Austin Chamber of Commerce report . The Austin appeal from residents living in more congested places like California became more prevalent during the pandemic when stay-at-home orders were issued and people sought more space.

It wasn't just Austin though; lots of other Sunbelt cities saw an influx in their housing market as a result of people working from home and looking for a lower cost of living. And that included Texas in general, with people flooding to various Texas cities.

But it hasn't come with resistance. The "Don't California my Texas" pleas are still alive and well, as Californians are blamed for raising the cost of living by outpricing current residents. The housing market has reached record numbers in the median home price year-over-year since the beginning of the pandemic . Austin was even predicted to be the most expensive city outside of California by the end of the year.

Still, Californians and even New Yorkers can't stay away. Companies and celebrities have followed, leading Texas transplant Elon Musk to label Austin's future as "the biggest boomtown that America has seen in half a century."

so leave a liberal state to move to a liberal city... doesn't make much sense... leave your liberal ideology in California before coming to Texas

It makes sense, Austin has become California which is so sad because Austin use to be so clean and beautiful but traded it all for liberal politics!!

In 2002, we moved from Northern California to North Texas. It was a two-year stay to work at a San Francisco newspaper and be part of the dot-com boom. In 2000, we had moved from Arlington to the East Bay area. But Texas’ identity brought us back. On a visit...
TEXAS STATE・20 HOURS AGO
CultureMap Houston

Houston leads Texas in most Californians relocating from this county, says new study

The Hollywood-to-Houston population pipeline is overflowing, a new study suggests. Harris County ranks as the No. 1 destination for people relocating to Texas from California, according to a StorageCafé data analysis. The No. 1 place of origin? Los Angeles County, home to Hollywood. Among California counties, Harris County attracted the...
CALIFORNIA STATE・3 HOURS AGO
KESQ News Channel 3

A national agricultural farmworkers organization is traveling the country checking in on women who work in the fields. The organization, Alianza Nacional de Campesinas, is focusing on women's experience as workers during the pandemic. The group has traveled to Texas, Arizona, now California, and will head to Oregon next. The women are traveling from the The post National Farmworkers’ Organization stops in Coachella Valley, focusing on women’s needs amid pandemic appeared first on KESQ.
AGRICULTURE・19 MINUTES AGO
SFGate

They had good jobs and a home in the Mission. Why leave SF?

A few years ago, you might have thought Beth Hoffman and her partner John Hogeland had many reasons to be contented San Francisco residents. Hoffman had a coveted job as a full-time professor at the University of San Francisco and Hogeland was an employed chef and butcher. Together they owned a home in the city’s Mission District where they had plenty of friends and could enjoy the area’s rich variety of food. Life seemed pretty good.
SAN FRANCISCO, CA・3 DAYS AGO

The cargo crisis in California is affecting everything from the cost of groceries to the threat of a holiday shopping shortage across the nation.
SAN DIEGO, CA・3 DAYS AGO
Newsradio 600 KOGO

Only 1 In 5 Californians Passed This State History Quiz

A new study gives us a clearer rainbow-hued idea of just how large Austin’s LGBTQ community is. The study, released October 11 by the LGBTQ Quality of Life Advisory Commission, estimates the size of the Austin area’s LGBTQ community at 100,000 to 118,000, or roughly 5 percent of the region’s population. The total is just shy of the number of people who live in Round Rock.
AUSTIN, TX・4 DAYS AGO
KHYL V101.1

This Is What Californians Fear The Most, According To New Study

YourLocalSecurity's annual report revealed what California's biggest fear is in 2021.
HEALTH・6 DAYS AGO

AUSTIN, Texas — With two major real estate deals, The University of Texas at Austin is adding housing to accommodate more than 1,700 students as part of its long-term efforts to address affordability and keep students close to campus. The university just closed on the purchase of Dobie Twenty21, formerly...
AUSTIN, TX・6 DAYS AGO
KHFI 96.7 KISS FM

Everything's bigger in Texas, including the number of Californian transplants.
CALIFORNIA STATE・10 DAYS AGO
fox5atlanta.com

AUSTIN, Texas - It's official. Tesla is moving its headquarters to Austin. Elon Musk announced the move during the 2021 Annual Shareholders meeting Thursday afternoon at the new Gigafactory in Del Valle. "I'm excited to announce that we're moving our headquarters to Austin, Texas," Musk said in the meeting, which was livestreamed.
TEXAS STATE・10 DAYS AGO
Only In Northern California

Northern California is full of places with creepy stories that seem to linger. We even compiled a road trip that leads you to the most haunted places in NorCal! However, the town featured here has a seriously spooky presence and is known to contain occasionally-nuts paranormal activity. Placerville is a quaint town with a relatively […] The post The Creepy Small Town In Northern California With Insane Paranormal Activity appeared first on Only In Your State.
CALIFORNIA STATE・12 DAYS AGO

This sign on the California I-5 has puzzled SF and LA drivers for years. Where did it come from?

On I-5 is a drab stretch of highway, mostly lined by farmland and occasionally broken up with signs condemning California's water use policy. But one innocuous sign near Bakersfield has long inspired curiosity, befuddlement and hundreds of online dispatches from travelers passing. The sign, just outside the oil derrick town of Lost Hills, reads “Tom McCleod slept here” in an austere sans-serif font. It raises the question asked again and again by drivers: Who is Tom McCleod?
CALIFORNIA STATE・18 DAYS AGO
ABC7 News Bay Area

If everyone is fully vaccinated, and there aren't more than 100 people, masks won't be required in offices, gyms, indoor college classes, or religious gatherings in the counties.
SAN FRANCISCO, CA・2 DAYS AGO
thekatynews.com

A Comprehensive Guide to Funding Options for Small Businesses in Texas

Several organizations offer financial aid to startups and established businesses in Texas. The financial aid could be in form of training, mentorship, grants, and small business loans. Factors such as the growth of a business, the relevant industry, and the impact on the local economy influence the eligibility criteria for these resources.
TEXAS STATE・3 DAYS AGO
Austin American-Statesman

An analysis by Blind, an anonymous professional social network with more than 5 million users, showed nine job postings at tech companies with an Austin presence that are offering total compensation packages of $142,000 or more.
AUSTIN, TX・6 DAYS AGO
Community Impact Austin

In September, the city of San Marcos began the process of opening up dialogue and renewed attention to the issue of homelessness in the city. San Marcos City Council entered into an interlocal agreement with Texas State University on Sept. 7 to begin studying the issues and needs of people without housing in San Marcos and to provide a needs assessment of the population.
TEXAS STATE・7 DAYS AGO
American Banker

California will study feasibility of public banking option for consumers

California will establish a commission to analyze the feasibility of offering fee-free bank accounts to consumers — the latest salvo in a long-running statewide push for public banking. Democratic Gov. Gavin Newsom signed legislation Monday to establish the commission, which will be required to finish its analysis by July 1,...
CALIFORNIA STATE・11 DAYS AGO