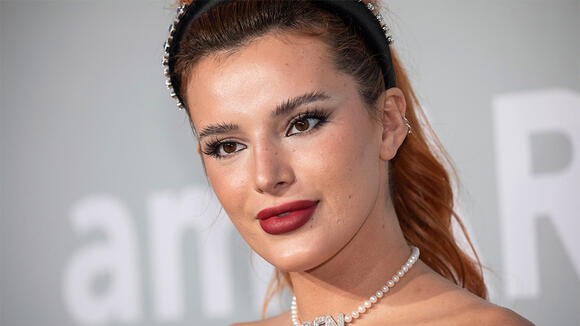 Bella Thorne is set to star opposite Aaron Eckhart in the action thriller, “ Rumble Through the Dark .”

“Rumble Through the Dark” is based on Michael Farris Smith’s novel, “The Fighter.” Smith adapted his novel into a screenplay, which will directed by Graham Phillips and Parker Phillips. Production wrapped this week in the Mississippi and Delta region, after being briefly shut down due to Hurricane Ida.

“Rumble Through the Dark” is set in the dark landscape of the Mississippi Delta where a bare knuckle cage fighter (Eckhart) seeks to repay his debts to a local mob boss in a final desperate attempt to salvage his family home. Thorne plays a carnival hustler who stumbles upon a murder that ultimately leads to a dark family connection.

“Bella is a fearless artist,” the directors said in a statement. “Watching the chemistry between her and Aaron Eckhart develop throughout the story has been one of the film’s greatest triumphs.”

Foresight Unlimited is handling sales. Cassian Elwes of Elevated is representing the film in the U.S., and will serve as a producer, along with Cleta Ellington, Mark Damon, Tamara Birkemore, Tate Taylor, John Norris and Jere Hausfater.

Thorne tells Variety that Elwes approached her with the script after they had worked together on Lionsgate’s “Habit” in 2021. She says she was attracted to the film because of the strong writing for her character.

“Rumble Through the Dark” is the latest project for Thorne, who got her start on Disney Channel’s “Shake It Up,” and has evolved into a multi-hyphenate force with a huge social media presence and committed fanbase. Always working, Thorne recently starred in Amazon’s “Paradise City,” Netflix’s “The Babysitter” and Freeform’s “Famous In Love.”

Her latest film, “Time Is Up,” is out Friday. In the teen romance, directed by Elisa Amoruso, Thorne stars opposite her real-life fiancé, Italian musician, Benjamin Mascolo.

The actor, model, singer and author recently released her book, “The Life of a Wannabe Mogul,” which is a collection of poems that chronicle her personal struggles, relationships and wild-child lifestyle. Thorne said she wrote the book in two weeks, while filming on set.

“I lost my first two handwritten books on a flight, so it took me minute to comes to terms with that,” she laments. “But eventually, I started writing again, this time on a typewriter. I would literally walk around set with a huge typewriter.”

“It was important for me to write it on a typewriter, rather than going back to handwriting,” Thorne adds. “Handwriting is the truest form of your identity. Your DNA. I didn’t want to give all of myself.”

Thorne, whose personal life frequently makes headlines, says the inspiration for her book was showing the world who she really is.

“I was tired of people perceiving me as not myself,” Thorne explains. “I felt misunderstood, so I wanted to write something raw and authentic to show the public who I am on a silver platter.”

Thorne is repped by CAA and Thor Bradwell of Thirty Three Management.

Welcome to this week’s “Just for Variety.” Wonder Woman approves of Robert Pattinson as the new Batman and Zoë Kravitz as Catwoman! “Rob looks amazing,” Gal Gadot told me last night at Elle’s Women in Hollywood event at the Academy Museum when I asked if she had seen the new “The Batman” trailer. “I love his voice and I love the whole tone of everything. “And I love Zoë. She looks incredible. She’s a sweetheart. She’s a talented woman,” she continued. “And I’m so happy to have another female as a comrade.” So when does Gadot think we’ll see an all-female superhero movie with...
MOVIES・6 DAYS AGO
Variety

Would Kristen Stewart Play the Joker in a Batman Film?

Will we see Kristen Stewart as the Joker opposite Robert Pattinson’s Batman? Probably not. “Let’s do something new,” Stewart says. Following a social media campaign to cast the “Spencer” star as the Clown Prince of Crime alongside her “Twilight” co-star and ex-boyfriend Pattinson in an upcoming film from “The Batman” universe, Variety asked Stewart if she would ever consider playing the famous villain. “I love the energy behind that,” Stewart tells Variety, on her way to an Academy event to promote her work as Princess Diana in Neon’s “Spencer,” from director Pablo Larraín. “It’s really been done so well. I feel like, maybe,...
MOVIES・6 DAYS AGO
Variety

With Jane Campion’s “The Power of the Dog” picking up steam after playing nearly the entirety of the fall festival circuit, Netflix has confirmed to Variety exclusively that Kirsten Dunst, one of the standout sensations from the Western, will campaign for supporting actress for the awards season. This decision doesn’t...
MOVIES・5 DAYS AGO
TheWrap

Hannah Gutierrez-Reed, the 24-year-old armorer who handled weapons on the set of Alec Baldwin’s “Rust,” was the subject of numerous complaints on her previous film just two months earlier after she discharged weapons without warning and infuriated star Nicolas Cage, a crew member told TheWrap. Stu Brumbaugh, who served as...
LOS ANGELES, CA・3 HOURS AGO

Alexis Rodney, the British star of Guardians of the Galaxy, Outlander and the upcoming Dungeons and Dragons movie (alongside Rege-Jean Page and Chris Pine), has joined the upcoming dark comedy Young Gun, The Hollywood Reporter can reveal. The film — from London-based Dark Matter Studios — is currently shooting on location in the British capital (Rodney can be seen in the exclusive first production still), with a 2022 international release date targeted. Written and directed by Henk Pretorius, Young Gun tells the wild-sounding story of illegal immigrant Shaka (Rodney), who accepts a lucrative contract to assassinate the alleged founding member of the...
MOVIES・6 DAYS AGO
SFGate

Newcomer Jamila C. Gray to Star in 'On the Come Up,' Directed by Sanaa Lathan (EXCLUSIVE)

Paramount Players has hired newcomer Jamila C. Gray to star in “On the Come Up,” the upcoming film adaptation of Angie Thomas’ New York Times bestselling follow-up book to “The Hate U Give.”. Leading an all-Black cast, Gray stars in the Paramount Players movie as Bri, a 16-year-old who wants...
MOVIES・5 DAYS AGO
Variety

EXCLUSIVE: Insidious star Lin Shaye is set to star in and exec-produce TV series action-thriller Ellen, which heralds from New Regency and QCode. The six-episode series, which is being financed by The Revenant and The Beast Must Die outfit New Regency, will follow a nefarious land developer who gets more than he bargained for when he tries to intimidate an 80-year-old widow into abandoning her Montana ranch. Additional casting is in process on the series, which is based on an original idea from Jalmari Helander (Big Game). The project marks the third small screen tie-up between busy audio and content firm QCode, New...
TV & VIDEOS・12 DAYS AGO

Studiocanal and The Picture Company, which previously teamed up for Netflix action movie Gunpowder Milkshake, have found their next action-thriller project. The two production entities have preemptively picked up Eurostar, a high-concept pitch from Ben Ripley, the scribe behind the Jake Gyllenhaal hit Source Code. Details are being kept in the caboose, but the story is a ticking clock thriller set aboard the famous Eurostar train line that runs underneath the English Channel, also known as the Chunnel, from London to Paris. As befitting the man who wrote Source Code, there is even a sci-fi hook. The project has been described as tonally...
MOVIES・13 DAYS AGO
IGN

Bruce Willis must play the most dangerous game in Apex, an upcoming action movie also starring Neal McDonough (Captain America: The First Avenger, Resident Evil: Welcome to Raccoon City). IGN has the exclusive new trailer for Apex, which you can watch via the player above or the embed below. We...
MOVIES・13 DAYS AGO
Distractify

In October, there's no better way to celebrate Halloween than a horror movie. While anyone who has seen Twilight one too many times might be tired of vampires, the new Netflix film Night Teeth provides a breath of fresh air to the genre. In an exclusive interview with Distractify, actor...
MOVIES・10 DAYS AGO
SFGate

Cress Williams, Kellan Lutz and Anne Heche are starring in “What Remains,” a murder mystery that is shooting in Texas. The film centers on a small town pastor (Williams) forced to contend with an act of forgiveness when the convict (Lutz) he forgave for murdering his wife returns to town five years later. At the same time, the town sheriff (Heche) is investigating another murder that may be related.
MOVIES・14 DAYS AGO

Jonathan Tucker (Parenthood, Westworld, Debris) has signed on to star opposite Michelle Monaghan (Kiss Kiss Bang Bang, Gone Baby Gone) in the Netflix limited series Echoes. The mystery thriller was created and written by Vanessa Gazy (Eden), with 13 Reasons Why showrunner Brian Yorkey on board as well. Here’s the...
TV SERIES・4 DAYS AGO
The Hollywood Reporter

Dolph Lundgren, Scott Adkins and Ryan Kwanten are set to go head-to-head in upcoming action movie Section Eight, The Hollywood Reporter has learned. Based on an original screenplay by Chad Law (The Hit List, Drive Hard) and Josh Ridgway (The Sector, Howlers), and set to be directed by Christian Sesma (Pay Dirt, The Night Crew), the film comes from Firebrand, reunited with Lundgren for a third time following 2017’s Altitude and upcoming Christmas action-comedy Pups Alone. Firebrand founder Brandon Burrows will produce. Section Eight will tell the story of a former soldier who, after avenging the murder of his family, is sprung...
MOVIES・6 DAYS AGO
Collider

After appearing in “Ghostbusters: Afterlife,” “Freaky” and “Selah and the Spades,” Celeste O’Connor has boarded Zach Braff’s latest movie “A Good Person.” O’Connor joins a troupe of major Hollywood players in the film, led by Florence Pugh, Morgan Freeman, Molly Shannon and Zoe Lister-Jones. The film, written and directed by Braff, follows Allison (Pugh), a woman whose life falls apart after her involvement in a fatal accident. In the years that follow, Allison develops an unlikely relationship with her would-be father-in-law (Freeman), that helps her inevitably recalibrate a life worth living. O’Connor plays Ryan, a star high-school soccer player who grapples with...
MOVIES・1 DAY AGO
The Hollywood Reporter

Timothée Chalamet enjoyed a successful doubleheader at the domestic box office over the weekend as two of his high-profile films opened to strong numbers: Dune and The French Dispatch. Dune in particular is another defining moment for the young actor. The sci-fi epic, from Warner Bros. and Legendary, marks the first time Chalamet has played the lead role in a major Hollywood studio tentpole. “I think we’ve only begun to scratch at the surface of his unique talents,” Legendary’s vice chairman worldwide production Mary Parent told The Hollywood Reporter on Sunday. “He’s a legitimate movie star, and has that intangible thing that...
MOVIES・1 DAY AGO
TIME

The 19 Most Underrated Movies on Netflix