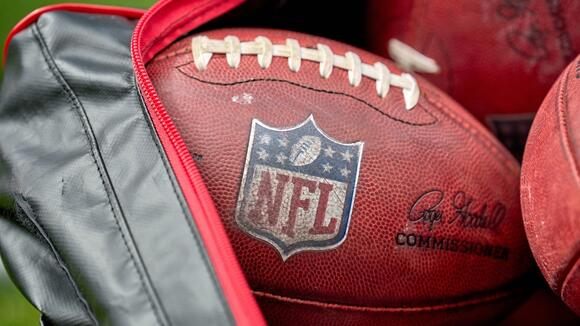 BOSTON (CBS) — A major change is coming to the NFL postseason.

The setup and the broadcasting networks for each game remain yet to be deterined.

The reaction San Francisco Giants first base coach Antoan Richardson had to first base umpire Gabe Morales’ call on a check swing went viral on Thursday night. The Giants lost 2-1 to the Los Angeles Dodgers in Game 5 of the NLDS at Oracle Par in San Francisco. The game ended after Morales said that Wilmer Flores went around on a check swing on a 0-2 pitch from Max Scherzer with two outs (see it here). Most people recognized right away that Morales blew the call.
MLB・18 HOURS AGO
Popculture

Colin Kaepernick has a lot of projects going on including his new Netflix series that will premiere at the end of this month. But the former San Francisco 49ers quarterback is ready to get back into the NFL despite being away from the league for five years. Kaepernick recently spoke to Ebony about his career and said he's still training for an NFL comeback.
NFL・2 DAYS AGO
The Spun

DeAndre Hopkins’ status for the Arizona Cardinals’ Week 3 game has reportedly been decided. According to NFL Network insider Ian Rapoport, the All-Pro wide receiver is officially a go for Sunday afternoon’s game. The Cardinals are set to take on the Jaguars on Sunday afternoon. Hopkins was listed as questionable...
NFL・19 DAYS AGO
People

NFL Star, 24, Killed While Protecting His Family from Burglary Will Have Jersey Number Retired by WFT

Sean Taylor's NFL career was bright before his life was tragically cut short in 2007. The Washington Football Team is paying tribute to Taylor nearly 15 years after his death by retiring the late safety's jersey number ahead of Sunday's matchup against the Kansas City Chiefs, according to a statement. Nearly 100 alumni will also be honored at FedExField.
NFL・1 DAY AGO

We’re one full week (and one Thursday night Week 2 game) into the 2021 NFL regular season. There are several deserving picks, as a couple of teams looked pretty bad during the league’s opening weekend. However, one stands out according to Troy Aikman’s rankings. The former Dallas Cowboys star quarterback...
NFL・27 DAYS AGO
The Spun

The Seahawks Signed A New Quarterback On Wednesday

Last week, the Seattle Seahawks learned that Russell Wilson would have to miss an extended period of time due to a finger injury. With him out for at least the next month, the front office has decided to bring in another quarterback as an insurance policy. On Wednesday, the Seahawks...
NFL・2 DAYS AGO
CBS Sports

With the Packers off to a 4-1 start this season, the Aaron Rodgers drama that dominated the offseason seems like a distant memory. However, as soon as the 2021 season ends, there's a good chance that last year's drama is going to pick up right where it left off and that's because Rodgers still doesn't necessarily seem interested in staying in Green Bay.
NFL・1 DAY AGO
FanSided

NFL insider touts potential trade between Panthers and the Chiefs

ESPN’s NFL insider Jeremy Fowler touted the Carolina Panthers and Kansas City Chiefs as potential trade partners before the 2021 deadline. The Carolina Panthers are clearly willing to do whatever it takes from a personnel standpoint in pursuit of putting together a competitive roster. General manager Scott Fitterer‘s aggressiveness in the trade market has been notable since his arrival from the Seattle Seahawks, with the likes of cornerback duo C.J. Henderson and All-Pro Stephon Gilmore joining the organization over the last month.
NFL・1 DAY AGO

Brady wanted a two-year commitment, and when the Patriots refused, it set the wheels in motion for Brady to leave in free agency.
NFL・3 DAYS AGO
mediaite.com

Los Angeles Dodgers fans haven’t portrayed themselves in the best manner this season, with crowd fights becoming a regular occurrence. Friday night, one person leveled up on the idea of bad or rowdy fan behavior, by flailing his fists in every direction hoping to connect with a police officer or security.
LOS ANGELES, CA・11 DAYS AGO
Audacy

With the game in the balance, momentum strongly on the side of the home team, a massive upset just around the corner, and a big play being made, it's every NFL fan's worst nightmare that such a picturesque scenario could be derailed by the referees. And when it's not a pass interference, or facemask, or unnecessary roughness — or any other flag that has a tangible effect on how the game is played — but a taunting penalty that is the impetus for such a momentum-crushing blow, that nightmare becomes even worse.
NFL・11 HOURS AGO
102.5 WDVE

Brandon Staley is already becoming a rising star in his first year as head coach of the Los Angeles Chargers. Staley was a linebackers coach for the Bears and Broncos before spending last season as a defensive coordinator for the Rams, where he parlayed a successful year into the Chargers top job. Now the 38-year-old is leading a 4-1 football team in first place in the AFC West with a young star quarterback in Justin Herbert.
NFL・1 DAY AGO
The Spun

Antonio Brown’s connection with Tom Brady most likely played a factor in him signing with the Tampa Bay Buccaneers in 2020. Though they haven’t spent a full season together, it sounds like their connection is only getting stronger. During a new episode of his “Let’s Go!” podcast with Jim Gray...
NFL・2 DAYS AGO
The Spun

Late Monday night, Jon Gruden shocked the football world when he resigned as the head coach of the Las Vegas Raiders following a series of controversial emails. Gruden sent a series misogynistic and derogatory emails during his time with ESPN. According to a report from The Times, many of these emails were exchanged with Bruce Allen, the then-president of the Washington Football Team.
NFL・2 DAYS AGO
The Spun

The Kansas City Chiefs have been arguably the best team in the National Football League for two-plus seasons, but they’re struggling in 2021. Kansas City is now 2-3 on the season following Sunday night’s home loss to the Buffalo Bills. Chiefs star quarterback Patrick Mahomes threw two interceptions in the...
NFL・4 DAYS AGO
thespun.com

Dallas Cowboys cornerback Trevon Diggs is making a strong case for just about every honor in the NFL this season. Unfortunately, the team might be without him for Sunday’s game against the New England Patriots. According to Cowboys insider Clarence Hill Jr., Diggs is going to be a gametime decision...
NFL・8 HOURS AGO
FanSided

After the shocking firing of St. Louis Cardinals manager Mike Shildt, names are already floating around for replacements, including a former Cardinals star. Despite a historic winning streak and a promising postseason run, Mike Shildt is out of St. Louis. The decision sent shockwaves through MLB Twitter, with baseball fans...
MLB・23 HOURS AGO
FanSided

Braves screwed over by umps on so-called ‘unreviewable’ play (Video)

The Brewers were given an out that they did not deserve, thus limiting the Braves scoring in the bottom of the fourth inning. Adam Duvall is very, very involved in the Braves miscues so far in Game 4, even if this one wasn’t remotely his fault. Duvall made a terrible...
MLB・3 DAYS AGO
FanSided

This season has become a pleasant surprise for Chicago Bears fans. There probably weren’t many people projecting the Bears to be in playoff positioning after five weeks, but Chicago is currently the no. 6 seed in the NFC. One of the biggest reasons for that success has come due to...
NFL・10 HOURS AGO