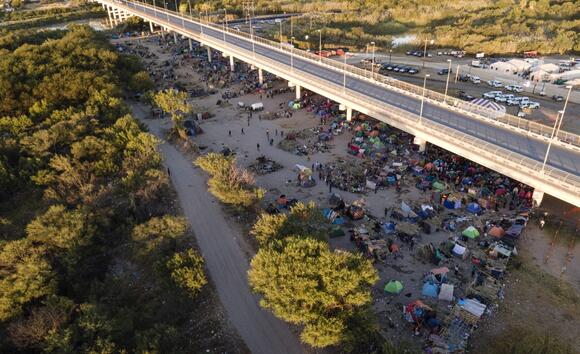 A Democratic judge in Texas ripped the Biden administration on Thursday for its handling of the border crisis and said President Joe Biden is the cause of the problem.

"What has he done?" Webb County Judge Tano Tijerina asked. "I invited President Biden to come down to the border."

Tens of thousands of immigrants swarmed the southern border in the past several days, Tijerina said.

"The Haitians are causing great havoc. You know, they're not, they're not incredibly the best," he said. "So we got ourselves in a situation."

The costs imposed by the border crisis, financially and otherwise, are slamming communities in the area, Tijerina said , adding that the media is focusing on only a select few incidents that misrepresent the situation.

"But there's 1,000 pictures of everything else that's going on, that's basically falling through the cracks," he said. "And yet, nothing's been mentioned."

The president has gone back on his claim that the health of the nation and its people is a high priority, Tijerina said.

It does not matter what Biden did in the Senate or what his prior record shows, the judge said.

"Today, he has an opportunity to show the world what he is and who he is," he said. "And unfortunately, he hasn't done that."

Duhhhhhh. To you people who voted for this Administration. 👍🏻 well done and you are you happy because sooner than later you free meal ticket will be gone and then what.

Biden of Harris niether one will go to the border. Their to concerned about playing big shots to other countries and climate control.

Excellent Legal Opinion from this Judge!! Short & Sweet, summing up How this DEBACLE Happened, and who started it!!

President Joe Biden took part in the 2021 Association of Southeast Asian Nations summit on Tuesday morning and announced an investment worth up to $102 million to expand the United States's partnership with the group.
PRESIDENTIAL ELECTION・15 HOURS AGO
WashingtonExaminer

Kirk Hartle claimed someone cast the ballot of his deceased wife. Prosecutors say it was him.
NEVADA STATE・17 HOURS AGO

WASHINGTON — The Senate confirmed two Republicans nominated by President Joe Biden to top diplomatic posts Tuesday. Former Arizona Sen. Jeff Flake was confirmed as U.S. ambassador to Turkey, and Cindy McCain, the widow of GOP Sen. John McCain of Arizona, will be the country's representative at the United Nations Agencies for Food and Agriculture.
8 HOURS AGO
NBC News

WASHINGTON — A Republican secretary of state who challenged former President Donald Trump's false claims of election fraud in 2020 is the front-runner for a job heading the Biden administration's effort to protect future elections, according to people familiar with the discussions. Kim Wyman, 59, has led elections in Washington...
PRESIDENTIAL ELECTION・18 HOURS AGO
The Guardian

Is Biden’s entire agenda about to shrink into nothingness?

This week, Democrats either reach an agreement on Biden’s social and climate agenda or the agenda may shrink into meaninglessness. The climate measures in particular need to be settled before Biden heads to Scotland for the UN climate summit this weekend, so other nations will see our commitment to reduce carbon emissions.
19 HOURS AGO
Axios

Sen. Ted Cruz (R-Texas) does not plan on stalling the confirmation of President Biden's ambassador to China, Nicholas Burns, as he has done with dozens of other State Department nominees, according to a source familiar with the decision. Why it matters: Burns, a former career diplomat widely viewed as one...
14 HOURS AGO
Newsweek

"This makes my blood boil," Representative Grace Meng said of a report that her Republican colleagues helped plan the protest before the January 6 insurrection.
1 DAY AGO
POLITICO

Internal polling for House Republicans shows them leading Democrats on the generic ballot in battleground districts.

Independents are bailing on Biden in what's a blaring red siren for their prospects in the midterms. What happened: The National Republican Congressional Committee is delivering good news Tuesday to GOP members: internal polling has them surging with independent voters and leading Democrats on a generic ballot for the first time this cycle. Committee operatives are presenting the data to the Republican conference during a political strategy meeting.
PRESIDENTIAL ELECTION・16 HOURS AGO
WashingtonExaminer

Rep. Alexandria Ocasio-Cortez claimed on Sunday that "almost 10" people died from the Jan. 6 Capitol riot, an inflated estimate that apparently includes those not killed directly during the mayhem.
WASHINGTON, DC・14 HOURS AGO
WashingtonExaminer

Push for the ‘AOC Prevention Act’ to stop spending binge

Conservatives fearful of President Joe Biden and liberal Democrats piling on waves of regulations and spending are pushing back with a new effort to rein Uncle Sam in before it’s too late and the dream of limited government goes poof.
U.S. POLITICS・14 HOURS AGO
The Independent

This week, there has been a lot of discussion about whether politicians might have helped to plan the January 6 rally that led to a violent insurrection at the Capitol, following the publication of an explosive article by Rolling Stone. The article claimed that people who organized the protest had participated in “dozens” of planning meetings “with members of Congress and White House staff”. And the way in which lawmakers have responded to such allegations is particularly telling.Alabama Representative Mo Brooks denied involvement, but then went on to say, “I don’t know if my staff did [help plan the rally].....
CONGRESS & COURTS・10 HOURS AGO
WashingtonExaminer

AUSTIN, Texas — Whether the Biden administration will be able to follow through on the Supreme Court’s order to restart a Trump administration program that made asylum-seekers temporarily live in Mexico will come down to whether Mexican President Andres Manuel Lopez Obrador allows it.
18 HOURS AGO
WashingtonExaminer

President Joe Biden’s open borders policy is expected to lure some 2.1 million illegal immigrants across the US.-Mexico line — 500,000 more than the previous record and a sure bet to kill his goal of amnesty for the 11 million already in the country.
POTUS・14 HOURS AGO
Vice

Want the best of VICE News straight to your inbox? Sign up here. An alleged Capitol rioter was released to the custody of his parents Tuesday after a judge in the case said he was surrounded by the “toxic environment” of the D.C. jail holding dozens of January 6 defendants.
12 HOURS AGO
POLITICO

The president once more pushed back the scheduled release. But after 58 years, family members say the secrecy needs to end.
1 DAY AGO
POLITICO

Rather than distance himself from a down-ballot race, the president has tied himself increasingly to it.
17 HOURS AGO
northwestgeorgianews.com

In their first two months in the White House, President Joe Biden and Vice President Kamala Harris were practically inseparable — Harris traveled with Biden to the Pentagon, sat in the Roosevelt Room when he met virtually with a foreign leader and delivered her own remarks on the administration’s priorities.
18 HOURS AGO
WashingtonExaminer

Prosecutors revealed the FBI's former top lawyer will take the stand in next year’s trial of Michael Sussmann, who special counsel John Durham charged with lying to the bureau in 2016 as he pushed claims of secret Trump-Russia communications.
CONGRESS & COURTS・10 HOURS AGO