By Jamie Braidwood
The Independent
23 days ago 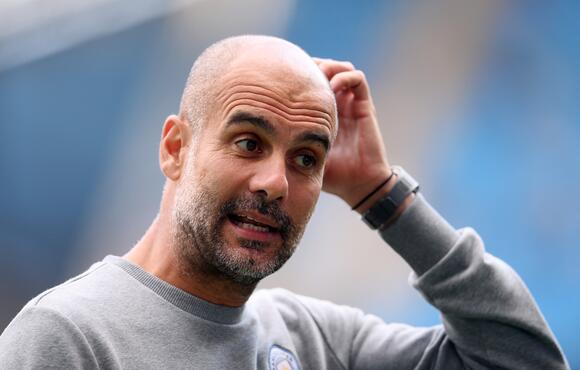 Manchester City manager Pep Guardiola has said his side’s run of tricky away fixtures against Chelsea, Paris Saint-Germain and Liverpool is a “privilege”.

City face Chelsea at Stamford Bridge on Saturday in a repeat of the Champions League final before travelling to PSG in a heavyweight Champions League group-stage match in a quick turnaround on Tuesday.

The Premier League champions then have four days of rest before they play Liverpool at Anfield on Sunday 3 October in the final match before the international break.

Thomas Tuchel has won his first three meetings against City as Chelsea manager , including the 1-0 Champions League final victory over Guardiola’s side in Porto at the end of last season.

The Blues are joint-top of the Premier League after five matches, having already faced trips to Arsenal, Liverpool and Tottenham, and Guardiola said his side are looking forward to the challenge of kicking off their tough week at Stamford Bridge.

“It’s so nice, what a privilege,” Guardiola said. “One game at a time, we travel to London, and after we prepare the next one.

“We prepare the game like Southampton, like before, try to read what they are, what we’ve done in recent games against Chelsea.

“Every game is a new challenge, to improve and do it better. It’s not a final, it’s completely different.

“The final was a tight game, we lost, and [2-1 defeat in the] Premier League was already done - we were almost champions.

“We’ll learn from these three games, it’s one more game in the 38 we have in the Premier League.”

City were held to a 0-0 draw against Southampton last Saturday and were beaten on their previous visit to London in the Premier League, a 1-0 defeat by Tottenham on the opening weekend.

Manchester City midfielder Cole Palmer scored a hat-trick as the U23s earned a 5-0 PL2 victory over Leicester at the Academy Stadium. Palmer, who remarkably had come on as a substitute earlier in the day in City's 2-0 Premier League win over Burnley, struck twice in the first half for Brian Barry-Murphy's league leaders.
PREMIER LEAGUE・21 HOURS AGO
The Independent

Pep Guardiola admits he will feel nerves and pressure ahead of Manchester City’s trip to Liverpool on Sunday – and would quit if he did not. The champions head to Anfield for the eagerly-anticipated Premier League clash just over a week after facing another of their likely title rivals in Chelsea.
PREMIER LEAGUE・14 DAYS AGO
SkySports

Pep Guardiola has insisted James Milner should have been sent off during Liverpool's 2-2 draw with Man City, while Micah Richards has branded the decision of referee Paul Tierney not to dismiss Milner as "ridiculous" and a "shocker". Milner, who had already been booked despite Tierney adjudging that the stand-in...
PREMIER LEAGUE・14 DAYS AGO
SkySports

Pep Guardiola admits he will feel nerves and pressure ahead of Manchester City's trip to Liverpool on Sunday, live on Sky Sports - and would quit if he did not. The champions head to Anfield for the eagerly-anticipated Premier League clash just over a week after facing another of their likely title rivals in Chelsea.
PREMIER LEAGUE・14 DAYS AGO

DANNY MURPHY: Pep Guardiola likes rotation but he is handling Jack Grealish perfectly by picking him every week and showing faith in Manchester City's £100million man

Cristiano Ronaldo’s arrival in Manchester has taken the spotlight off Jack Grealish, who would otherwise have been more scrutinised as the Premier League’s first £100million player. I’m sure it’s helped but the biggest reason for his encouraging start at City is Pep Guardiola picking him every week. We know Pep...
PREMIER LEAGUE・14 DAYS AGO
BBC

Manchester City boss Pep Guardiola speaking to BBC Radio 5 Live: "If you ask me about the points of course I am happy if you ask me about the performance I am more than happy. "The way we have played the last three games has been magnificent. We have played a lot of players and they have all played with personality and personality and unfortunately we could not win.
PREMIER LEAGUE・14 DAYS AGO
SkySports

Manchester City have made a complaint to Liverpool about a supporter allegedly spitting towards members of their backroom staff during the 2-2 draw at Anfield. Liverpool have confirmed they are investigating the allegation, which is said to have occurred after City's first goal. There is also said to be footage of the perpetrator.
PREMIER LEAGUE・14 DAYS AGO
chatsports.com

Harry Kane would have made Manchester City unstoppable this season, according to Gary Neville, who admitted he has one 'doubt' about Pep Guardiola's side. The Premier League champions dominated Liverpool in the first-half of their Anfield clash on Sunday, but could only score twice in the second-half to rescue a draw.
PREMIER LEAGUE・13 DAYS AGO

Manchester City faced last Saturday and for the next week what can only be described as one of the toughest three consecutive fixtures in world football. Chelsea (A), followed by a trip to Paris Saint-Germain (A) and finally Liverpool (A). City deservedly beat Chelsea 1-0 to pick up 3 vital...
PREMIER LEAGUE・14 DAYS AGO
CityXtra

The youngster put in an impressive attacking display in his side's Premier League clash against Jurgen Klopp's men at Anfield. After Sadio Mane has given the hosts the lead, Foden rose to the occasion with his second goal at Anfield in as many appearances with a solid strike past Alisson to level proceedings.
PREMIER LEAGUE・14 DAYS AGO
BBC

It was the two-minute period that threatened to shape this season's Premier League title race. Anfield. Liverpool v Manchester City. The champions of the past four seasons, separated by just 11mm in 2018-19 and one point so far in this campaign. The score is 1-1. James Milner - filling in...
PREMIER LEAGUE・14 DAYS AGO
goal.com

Academy star is Pep Guardiola's danger man after following up his dynamic show in their win over Chelsea with a starring role in 2-2 draw at Liverpool. Phil Foden may have idolised James Milner growing up as a Manchester City fan, but he showed him little mercy when they faced each other at Anfield.
PREMIER LEAGUE・13 DAYS AGO

Manchester City have taken a rare point away from Anfield in a thrilling 2-2 draw on Sunday afternoon. Sadio Mané and Mohammed Salah gave the hosts the lead on two occasions, but the Blues battled back both times, with goals from Phil Foden and Kevin De Bruyne meaning City end a tough week with four points out of six.
PREMIER LEAGUE・14 DAYS AGO
The Independent

At the point of relief after unrestrained combat, as both managers embraced and indulged in the rarity of being happy with the result in such a league-shaping fixture, there was a realisation at Anfield that the next title winners had just walked off the pitch. There can be no surety of whether the identity of the champions will be Manchester City or Liverpool, but to watch Pep Guardiola and Jurgen Klopp was to know even they believe it would be a shock to see another team showered with confetti at the end of the top-flight season.Listening to them and reading...
PREMIER LEAGUE・12 DAYS AGO
chatsports.com

Man City boss Pep Guardiola 'held cash in an offshore account in Andorra to avoid paying tax in Spain... before taking advantage of 2012 amnesty to pocket €500,000 in interest alone'

Manchester City manager Pep Guardiola held cash in an offshore account in Andorra during his time in charge of Barcelona in a bid to avoid paying tax in Spain, it has been claimed. The 50-year-old is one of the most high-profile names revealed in the 'Pandora Papers', an investigation by...
PREMIER LEAGUE・13 DAYS AGO
Yardbarker

Following Fernandinho was always going to be a tough ask for any defensive midfielder at Manchester City, but it looks like Rodrigo is grasping that opportunity with both hands. The Spaniard moved to the Etihad Stadium from Atletico Madrid in 2019, for a fee of around £63.5 million - a...
PREMIER LEAGUE・13 DAYS AGO
FanSided

Manchester City may have missed out on the signature of Harry Kane this summer but still, it seems that the club is not ready to give up on their chase for a superstar striker. Now as per the latest reports, the club has reportedly prioritized the signing of Erling Haaland from Borussia Dortmund.
PREMIER LEAGUE・11 DAYS AGO
Daily Mail

'There's obviously been some bust-up with Pep': Roy Keane believes 'something is going on' between Raheem Sterling and his Manchester City manager Guardiola, with the England star struggling for minutes this year

Roy Keane believes there has been a bust-up between Raheem Sterling and his manager Pep Guardiola at Manchester City. England star Sterling, off the back of an impressive Euro 2020 with his country, has started just two of City's seven Premier League games so far this season. Despite his lack...
PREMIER LEAGUE・5 DAYS AGO
Daily Mail

Phil Foden has agreed a new six-year contract with Manchester City as a reward for his rapid rise under Pep Guardiola. The 21-year-old has become integral to the City team, starring as they reached a first-ever Champions League final last season. That was underlined last week when Foden was named...
PREMIER LEAGUE・4 DAYS AGO
chatsports.com

Pep Guardiola appears to have scored victory in his quest for five substitutions to be permitted in the remainder of the Carabao Cup. As Sportsmail revealed earlier this month, the Manchester City boss was instrumental in a campaign to increase the number of interchanges for the rest of the competition.
PREMIER LEAGUE・3 DAYS AGO