By Associated Press
KTLA
22 days ago 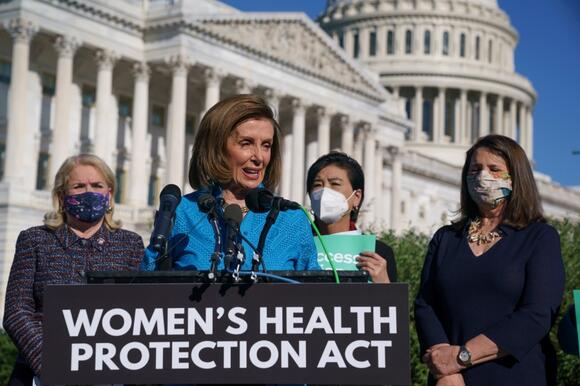 The House passed legislation Friday that would guarantee a woman’s right to an abortion, an effort by Democrats to circumvent a new Texas law that has placed that access under threat.

The bill’s 218-211 approval is mostly symbolic, as Republican opposition will doom it in the Senate.

Still, Democrats say they are doing all they can to codify the Supreme Court’s 1973 Roe v. Wade decision after the Supreme Court recently allowed the Texas law banning most abortions in the state to take effect. The court will hear arguments in December in a separate Mississippi bid to overturn the landmark decision.

Despite the long odds in his chamber, Senate Majority Leader Chuck Schumer, D-N.Y., said in a statement after the vote that “Congress must assert its role to protect the constitutional right to abortion” and that the Senate would hold a vote “in the very near future.”

Codifying the Roe ruling would mean creating a right to abortion in federal law, a monumental change that would make it harder for courts and states to impose restrictions.

House Speaker Nancy Pelosi has said that congressional action would make a “tremendous difference” in Democrats’ efforts to maintain access to abortion rights. She called the Supreme Court’s decision “shameful” and counter to its own precedent.

Pelosi said just ahead of Friday’s vote that it should “send a very positive message to the women of our country — but not just the women, to the women and their families, to everyone who values freedom, honors our Constitution and respects women.”

No Republicans voted for the legislation, which would supersede state laws on the subject, give health care providers the right to perform abortions and patients the right to receive them. Republicans argue it would prevent states from setting requirements like parental involvement and could weaken laws that allow doctors to refuse to perform an abortion.

The legislation “isn’t about freedom for women, it’s about death for babies,” said Republican Rep. Vicky Hartzler of Missouri. She said it would eliminate protections for women and girls who may be coerced into having abortions.

“It ends the life of a living human being with a plan and a purpose from God and who deserves to live,” Hartzler said.

Only one member crossed party lines — Democratic Rep. Henry Cuellar of Texas, who voted against the bill.

The vote came as Democrats have spoken boldly about fighting the Supreme Court — which has a more conservative tilt after Justice Amy Coney Barrett was confirmed last year — but struggled privately to find an effective strategy. They control Congress by the slimmest of margins, including the evenly split 50-50 Senate, making the prospects of a successful legislative response difficult.

The party has split, in some cases, over how far Washington must go to preserve access to abortions. Liberal lawmakers backed by advocates of reproductive rights who helped power President Joe Biden to office want to expand the number of justices on the Supreme Court to rebalance power, changing the rules if needed to lower the 60-vote threshold typically required in the Senate to advance legislation.

“Democrats can either abolish the filibuster and expand the court, or do nothing as millions of peoples’ bodies, rights, and lives are sacrificed for far-right minority rule,” tweeted Rep. Alexandria Ocasio-Cortez, D-N.Y. “This shouldn’t be a difficult decision.”

But other Democrats — Biden among them — have been wary of such a move.

Biden supports the House bill and called the court’s ruling on Texas an “unprecedented assault on a woman’s constitutional rights.” He has directed multiple agencies to conduct a government-wide effort to ensure women have abortion access and to protect health care providers. But he has not endorsed the idea of adding justices to the Supreme Court, instead forming a commission to study the idea.

The court’s decisions on abortion could prompt political tensions among Republicans, as well.

Former President Donald Trump was able to secure three new conservative Supreme Court justices because Republican leadership in Congress led by GOP leader Mitch McConnell paved the way. Now, as the court upheld the strict new Texas aw outlawing most abortions in the state, the political fallout will test the limits of that strategy.

Women and advocates of abortion rights are quickly mobilizing to take on not just those Republicans, but also the big businesses that backed them, aiming squarely at those that contributed to many of the Texas Republicans behind the abortion law.

“They will be met with a fierce response from women and people across the country,” said Sonja Spoo, director of Reproductive Rights Campaigns at UltraViolet, an advocacy organization, in an interview.

Maine Sen. Susan Collins, a Republican who supports abortion rights, says the Texas law is “harmful and extreme” and she supports codifying Roe.

But she says the House bill goes “way beyond” that and could threaten the rights of doctors who refuse to perform abortions on religious or moral grounds, for example.

“I support codifying Roe, and I am working with some of my colleagues in the Senate on legislation that would do so,” Collins said in a statement.

Jessica’s pantry is coming along well. Now, for what color to paint the cabinets?. This segment aired on California Cooking with Jessica Holmes Episode 112.
FOOD & DRINKS・7 HOURS AGO
KTLA.com

Once October hits, it’s all about pumpkins in Jessica’s house. She always thinks of different ways to use the gourd in recipes and realized she had never made whoopie pies!. Jessica’s creation gave her pumpkin pie vibes: They were moist, pumpkiny and not too sweet!. This segment aired on California...
RECIPES・7 HOURS AGO
KTLA.com

Jessica admits that she doesn’t go to Starbucks for their signature pumpkin spice latte, but she does love everything pumpkin. So, you guessed it, she made one at home! Her recipe for a PSL is easy to make and perfect for a cool fall day. This segment aired on California...
FOOD & DRINKS・7 HOURS AGO
Slate

President Biden's bipartisan commission studying potential ways to change the Supreme Court lost two of its conservative members on Friday, even as it remained split on the idea of court packing. Caleb Nelson, a law professor at the University of Virginia who clerked for Justice Clarence Thomas, and Jack Goldsmith,...
CONGRESS & COURTS・1 DAY AGO
MarketWatch

Washington in recent weeks failed to enact a bipartisan infrastructure bill, and it came up with only short-term fixes to avoid a U.S. default and prevent a partial government shutdown. So Congress and the White House will have to tackle all of those topics again in the weeks ahead, along with other issues.
WASHINGTON STATE・1 DAY AGO
Markets Insider

Progressives revolted the last time Nancy Pelosi tried to hold a vote on the roads-and-bridges bill, but Sinema seems determined for it to pass first.
CONGRESS & COURTS・2 DAYS AGO
Newsweek

The commission said the proposal of imposing term limits on Supreme Court justices had "the most widespread and bipartisan support."
CONGRESS & COURTS・1 DAY AGO

President Joe Biden's administration on Friday said it would ask the Supreme Court to block a ban on most abortions in Texas, in the latest stage of a national battle over reproductive rights. Biden's administration has vowed to fight the Texas ban, citing its interest in upholding Americans' constitutional rights.
TEXAS STATE・1 DAY AGO
The Independent

A judge has rejected the Republican-controlled Arizona Senate’s contention that it can withhold a raft of communications between its leaders and private contractors they hired to conduct an unprecedented review of the 2020 election results in the state’s most populous county.The ruling released Thursday evening is the latest in a series of losses for the Senate stemming from its efforts to keep secret records showing how the review was conducted. A watchdog group called American Oversight had sued to compel their release and repeatedly won. The Arizona Republic newspaper has a separate lawsuit seeking records from the election review.The...
PRESIDENTIAL ELECTION・1 DAY AGO
WTAJ

WASHINGTON (AP) — A commission tasked with studying potential changes to the Supreme Court has released a first look at its review, a draft report that is cautious in discussing proposals for expanding the court but also speaks approvingly of term limits for justices. The 36-member bipartisan commission, largely composed of academics, has been studying court […]
CONGRESS & COURTS・1 DAY AGO
ABC13 Houston

The move comes as the Texas clinics are running out of avenues to stop the GOP-engineered law that bans abortions once cardiac activity is detected.
TEXAS STATE・1 DAY AGO

US President Joe Biden's administration has said it will ask the Supreme Court to block a Texas law that imposes a near-total ban on abortion. It comes after a federal appeals court reinstated the law. The Supreme Court cited procedural issues when deciding against intervening to block it last month.
CONGRESS & COURTS・1 DAY AGO
The Independent

The Justice Department said Friday that the federal government will ask the Supreme Court to reverse a lower court decision on a restrictive Texas law that has banned most abortions since September. A federal appeals court on Thursday said the Texas law should stay in force while a Department of Justice lawsuit challenging the law proceeds through the courts. It's just the latest court action on the law, which is now headed for the Supreme Court for a second time. Here are some questions and answers about the law and its path through the courts.HOW EXACTLY DID TEXAS' LAW...
CONGRESS & COURTS・1 DAY AGO
The Independent

Texas can continue banning most abortions after a federal appeals court rejected the Biden administration’s latest attempt to stop a novel law that has become the nation’s biggest curb to abortion in nearly 50 years.The decision Thursday could push the law closer to returning to the U.S. Supreme Court, which has already once allowed the restrictions to take effect without ruling on its constitutionality. The Texas law bans abortions once cardiac activity is detected, usually around six weeks and before some women know they are pregnant. Since the law took effect in early September, Texas women have sought out...
CONGRESS & COURTS・1 DAY AGO
POLITICO

Many of the party's House members want a better plan than a Senate game of chicken. They might not get one.
CONGRESS & COURTS・1 DAY AGO

Progressive leaders in Congress are warning colleagues against a “false choice” over what to keep or cut as Democrats scale back President Joe Biden s now-$2 trillion package of social services and climate change strategies.In a letter Wednesday to House Speaker Nancy Pelosi Biden and Senate Majority Leader Chuck Schumer the leaders of the Congressional Progressive Caucus argue the package should not simply be narrowed as centrist lawmakers prefer, but instead kept as Biden's bigger vision but for fewer than 10 years — “shorter, transformative investments” that could be started quickly and then revisited.“Much has been made...
INCOME TAX・2 DAYS AGO
Reuters

WASHINGTON, Oct 14 (Reuters) - A White House commission studying potential changes to the U.S. Supreme Court said expanding the number of justices would pose "considerable" risks and might further politicize the court, according to preliminary draft documents released on Thursday. Members of the commission formed by President Joe Biden...
CONGRESS & COURTS・2 DAYS AGO
chantillynews.org

Nearly 39% of the country opposes the landmark abortion rights case that stood for 48 years: Roe v. Wade. According to the Pew Research Center Survey from April, the outcome of this Supreme Court case legally allowed a pregnant woman to have an abortion before the fetus’s viability which is around 22-24 weeks into pregnancy.
CONGRESS & COURTS・3 DAYS AGO
wibqam.com

WASHINGTON (Reuters) – The Democratic-controlled U.S. House of Representatives is expected on Tuesday to give final approval to a Senate-passed bill temporarily raising the government’s borrowing limit to $28.9 trillion, putting off the risk of default until early December. Democrats, who control the House by a mere four-vote margin, were...
CONGRESS & COURTS・4 DAYS AGO