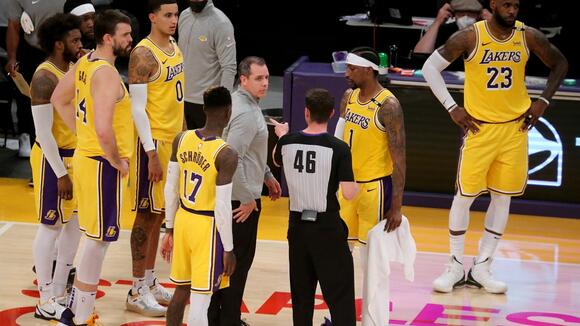 LOS ANGELES (CBSLA) – The general manager of the Los Angeles Lakers said Thursday he expects his entire roster to be fully vaccinated against COVID-19 when the season kicks off next month.

Robert Pelinka told reporters Thursday in a video conference call that all the players will be vaccinated by opening night on Oct. 19. 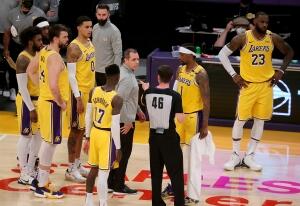 The Lakers are unhappy about a flagrant foul called against guard Kentavious Caldwell Pope during a playoff game against the Phoenix Suns at Staples Center on June 3, 2021. (Luis Sinco/Los Angeles Times/Getty Images)

“We will be on opening night, when we play the Golden State Warriors, all of the players that are currently signed on our roster, that night will be deemed fully vaccinated,” Pelinka said.

The NBA this upcoming season will not require players to be vaccinated, sources told ESPN last week. About 85% of players are vaccinated, an NBA spokesperson told ESPN at the time.

Pelinka said the Lakers have been working with UCLA Health on the vaccination issue.

“We’re really grateful for that, I think just in collaboration again with UCLA, and the doctors, people internally, we’ll be grateful that we won’t have interruptions caused by unvaccinated status of a player or staff member,” Pelinka said.

Back in March, Lakers star LeBron James said that his decision regarding whether or not to get vaccinated was a private one.

“That’s a conversation that, you know, my family and I will have,” James said at the time. “And pretty much probably keep that to a private thing. Obviously I’ve seen Adam (Silver) had his comments about the vaccination and what not. But, you know, things like that, when you decide to do something, that’s a conversation between you and your family and not for everybody.”

Rajon Rondo and Russell Westbrook are now teammates on the Los Angeles Lakers, and any beef between them is apparently dead. Rondo said as much during his introductory press conference with the Lakers and then again at Tuesday’s Media Day:. If you somehow forgot, there was a bit of Rondo-Russ...
NBA・23 DAYS AGO
ClutchPoints

Magic Johnson thinks the 29 other NBA teams not named Los Angeles Lakers are in danger. After all, they will be facing LeBron James who looks hungrier than ever to win the Larry O’Brien trophy. On Tuesday during the Lakers’ Media Day, Johnson praised LeBron for being in “excellent physical...
NBA・22 DAYS AGO
Lakers Nation

The additions of Russell Westbrook and Carmelo Anthony to the superstar duo of LeBron James and Anthony Davis give the Los Angeles Lakers one of the most talented rosters on paper of any team in the NBA. But almost immediately, many had questions about how they would fit together. In...
NBA・2 DAYS AGO
Lakers Daily

Avery Bradley, a key member of the Los Angeles Lakers’ 2020 championship team, has just returned to the Purple and Gold off waivers. A video has surfaced of Bradley, apparently during the preseason, being asked to come to the Lakers and showing no interest in doing so. Bradley played the...
NBA・3 DAYS AGO

Rajon Rondo is once again back in Los Angeles, and part of the Lakers. Rondo was with the Lakers between 2018 to 2020, during which time he helped the Lakers win the 2020 NBA championship. Rondo was absolutely spectacular during the Lakers' 2020 playoff run. He was easily the 3rd...
NBA・22 DAYS AGO
fadeawayworld.net

LeBron James: "I Didn’t Even Drink Wine Yet When I Teamed Up With D-Wade Or Kyrie. Or Tequila. I Was Still Figuring Out Who I Was As A Person."

LeBron James has been in the NBA for a long time. Of course, over 18 years, he has accomplished a lot of different things in many different ways and in multiple different locations. Now, in Los Angeles, he's looking to lead the Lakers to another Championship which is already proving...
NBA・2 DAYS AGO
CBS Seattle

Magic Johnson On Unvaccinated NBA Players: ‘I’d Never Do That To My Teammates’

LOS ANGELES (CBSLA) – Los Angeles Lakers legend Magic Johnson Monday addressed the situation surrounding NBA players who have refused to get vaccinated against COVID-19. FILE — Magic Johnson speaks to the crowd before the NBA All-Star Game at the United Center on Feb. 16, 2020 in Chicago, Ill. (Getty Images) In an interview with CBS News, Johnson said that players who go unvaccinated are “letting down” their teammates. “You have said to your teammates, ‘I’m gonna be there for you,’” Johnson said. “Well you can’t be there if you don’t get vaccinated. You letting them down. And then that hurts our chances...
NBA・2 DAYS AGO
fadeawayworld.net

NBA Fans Slam Russell Westbrook After His Lakers Debut: “He Can Make Me A House With Those Bricks”

Russell Westbrook finally made his debut for the Los Angeles Lakers today against the Golden State Warriors. Led by Stephen Curry, the Warriors managed to register a win on opening night. It was a great outing for the Dubs, but for the Lakers? They want to forget this fixture. Although...
NBA・1 DAY AGO

Just two of the greatest shooters in the history of the NBA dapping it up after the game. Immediately after the buzzer sounded to seal the Warriors' opening night 121-114 win over the Los Angeles Lakers, Steph Curry made a beeline for one of the commentators of Tuesday night's game, who also happens to be a Hall of Famer.
NBA・1 DAY AGO
lakers365.com

Lakers Could Be Without Key Players For Opening Night

The team announced that Monk would miss at least one week — including the remainder of the preseason — but remained hopeful he would be ready for opening night. The Lakers wrap their preseason on Thursday at the Sacramento Kings. Nunn — for whom LeBron has sung praises multiple times in camp — is working through a right ankle sprain, which caused him to miss Tuesday's exhibition vs. Golden State.
NBA・8 DAYS AGO
ABC7 News Bay Area

Stephen Curry had 21 points, 10 rebounds and 10 assists for the Golden State Warriors, who rallied from 10 points down to stun Lebron James, Anthony Davis and the new-look Los Angeles Lakers 121-114 in a season opener.
NBA・1 DAY AGO
theScore

Lakers' Ellington doubtful for season opener due to hamstring strain

Two teams from California are facing off to begin the NBA 75th Anniversary season Tuesday night. The Golden State Warriors and Los Angeles Lakers play each other at Staples Center in Los Angeles with a tipoff scheduled for 7 p.m on TNT. Two teams with championship aspirations have won two of the last four NBA Finals — Golden State in 2018 and Los Angeles in 2020.
NBA・2 DAYS AGO
chatsports.com

The Los Angeles Lakers might still have some figuring out to do. Despite big nights from stars LeBron James and Anthony Davis, the Lakers blew a double-digit lead in a season-opening 121-114 loss to the Golden State Warriors on Tuesday. James (34 points on 13-of-23 shooting, 11 rebounds, five assists)...
NBA・1 DAY AGO
AllLakers

The biggest concern with the construction of the Lakers’ roster this season was can they stay healthy enough to make a run. So far their durability has been tested, even before the start of the regular season. A handful of players have all dealt with injuries already and have had to miss games.
NBA・3 DAYS AGO
ClutchPoints

5 numbers to know from the Lakers’ season opening loss vs. Warriors

After dropping all six of their preseason contests, the Los Angeles Lakers (0-1) lost their first actual game of the 2021-22 NBA season, falling 121-114 to the Golden State Warriors (1-0) at Staples Center on Tuesday. Besides the completely overhauled roster — including Russell Westbrook and Carmelo Anthony in gold...
NBA・1 DAY AGO
USA TODAY Sports Media Group

3 takeaways: Lakers lose to Warriors in debut of LeBron James, Russell Westbrook and Anthony Davis together

The Los Angeles Lakers fell to 0-5 in the preseason after losing to the Golden State Warriors, 111-99. LeBron James, Russell Westbrook and Anthony Davis finally played together for the first time, though it didn’t end the way L.A. would’ve liked. Stephen Curry and Draymond Green didn’t play for the Warriors.
NBA・8 DAYS AGO
lakers365.com

The new-look Los Angeles Lakers fell to the Golden State Warriors to open their season on Tuesday, and didn't look particularly great as a team throughout much of the contest. While LeBron James and Anthony Davis were dominant, the rest of the Lakers were well off the mark with no one else reaching double figures in scoring, including Russell Westbrook.
NBA・1 DAY AGO
Santa Cruz Sentinel

Scroll down to get insights and updates from the Warriors’ season opener in Los Angeles on Tuesday night against the Lakers. To view the live updates on your mobile device click here. Whatever we learned about the Warriors’ unbeaten preseason (5-0) and the Lakers’ 0-6 exhibition schedule should reveal itself...
NBA・2 DAYS AGO
ClutchPoints

Considering the mileage and resumés of the future Hall of Famers on the 2021-22 Los Angeles Lakers roster, there’s going to be some statistical benchmark passed nearly every game by somebody wearing purple-and-gold. “Yeah, the support is there. I try to give people their flowers, you have to,” Carmelo Anthony...
NBA・2 DAYS AGO