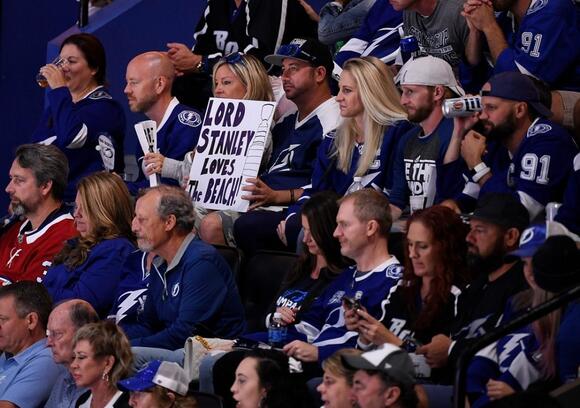 According to an internal document shared with NHL teams earlier this week, the league believes that 30 of its 32 teams will have full-capacity crowds during the 2021-22 season, multiple outlets reported Thursday.

The two teams not expected to allow sellout crowds during the upcoming season are the Vancouver Canucks and the Montreal Canadiens.

The Canucks could see an estimated 50 percent of home seats filled at Rogers Arena, which normally accommodates 18,910 fans. The Canadiens plan to open at 33 percent of the club’s 21,302 capacity at the Bell Centre.

In addition to crowd projections, the league’s memo reportedly described the anticipated vaccine guidelines for all the franchises.

As of this week’s policies, 14 other teams will not require fans to show copies of vaccination or negative COVID tests — although some or all of those teams could alter plans before the start of the season. Those teams are the Arizona Coyotes, Carolina Hurricanes, Colorado Avalanche, Columbus Blue Jackets, Dallas Stars, Detroit Red Wings, Florida Panthers, Minnesota Wild, New Jersey Devils, Philadelphia Flyers, Pittsburgh Penguins, Tampa Bay Lightning, Vegas Golden Knights and Washington Capitals.

In addition, 11 of the NHL’s 32 franchises will not mandate that fans wear masks for entrance — with the Ducks only requiring unvaccinated fans to sport masks. 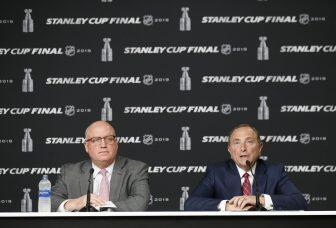 Also Read:
NHL says 98 percent of players will be vaxxed by opening night

The intention to clear full crowds for five of the seven Canadian teams was met with criticism from some in the medical community. In addition to questioning if a proof-of-vaccination card was legitimate enough for fans to gain entry, an infectious disease expert in Edmonton believes the move to big crowds was a recipe for serious trouble.

“On one hand, we have our health-care system in complete crisis and about to crumble,” Dr. Noel Gibney told Global News in Alberta. “But at the same time, life is pretending to go on as normal.”

“When we’re asking for help from the federal government, from the Canadian military, from other provinces in order to help our crumbling health-care system because of how bad COVID has gotten?”

Regarding players, last week NHL deputy commissioner Bill Daly told several media outlets that the league projects 98 percent of its players will be fully vaccinated against COVID-19 by opening night of the 2021-22 season on Oct. 12.

Unlike players, NHL coaches are required to receive a vaccine. 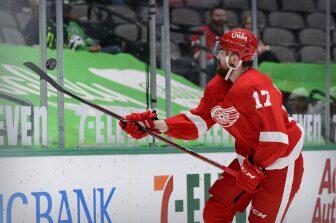 The B.C. government has given the Vancouver Canucks the green light to have full capacity, the final approval needed for the NHL to have all seats available across the league. The lifting of indoor capacity limits for B.C. event venues during the COVID-19 pandemic on Oct. 25 comes one day before the Canucks' home opener against the Minnesota Wild.
NHL・7 DAYS AGO
Pro Hockey Rumors

Canucks announce their home opener will be at full capacity

After a change in provincial legislation Tuesday, the Vancouver Canucks announced via Twitter that their home opener on Oct. 26 against the Minnesota Wild will be held with 100% fan capacity in the stands. After a six-game road trip to start the season (which still has three games remaining, including...
NHL・7 DAYS AGO
Sportsnaut

Twitter has become the news outlet for insiders without a news outlet behind them. Former Hockey Night in Canada host Nick Kypreos, who now does a podcast for Sportsnet in Toronto, dropped a nugget about the NHL’s leanings toward embattled San Jose Sharks forward Evander Kane. Kane has been under...
NHL・14 DAYS AGO
experiencecolumbus.com

The National Hockey League's (NHL) Columbus Blue Jackets (CBJ) are back in action for their 21st season at Nationwide Arena on Thursday, Oct. 14. A team in the Metropolitan Division, CBJ have a tough course ahead of them as they continue their quest for their first Stanley Cup. Here's what you can expect when attending a hockey game in Columbus.
NHL・14 DAYS AGO
NewsChannel 5 WTVF

It's the day many hockey fans have been waiting for. The Preds opened their season tonight to a full house.
NHL・12 DAYS AGO
gamepur.com

Much like in previous installments of the NHL franchise, Synergies will play a pivotal role with regards to how you build your squad in Hockey Ultimate Team (HUT). For those who might be new to HUT, each card has at least one special Synergy in NHL 22. A Synergy is an ability that, when active, positively affects the players and the attributes of the cards that have it. For example, if Evgeni Malkin has the Thief synergy, he will receive all the attribute boosts related to it, should that be active on the squad.
NHL・14 DAYS AGO

RALEIGH, N.C. (WNCN) – PNC Arena and Hurricanes fans got national attention during the 2020-2021 playoffs for the intensity and noise level at home games. Despite having limited capacity throughout the postseason, there was no lack of enthusiasm. This season, fans are back to 100 percent attendance. “I’m so excited....
NHL・12 DAYS AGO
Duluth News Tribune

While Tuesday’s practice at Amsoil Arena may have been the conclusion of a long training camp for the Minnesota Wild, it was the start of a crazy week for the home ice of the Minnesota Duluth men’s and women’s hockey teams. The Bulldogs are scheduled to host six games in...
NHL・14 DAYS AGO
NHL

Canucks Sports and Entertainment to Welcome Fans Back at Full Capacity

With the X back at full capacity, Wild embrace the butterflies

Marcus Foligno talked about the butterflies on Monday afternoon. Now a decade into his NHL career, the 30-year-old winger still gets them before games. Especially the home opener. Same goes for captain Jared Spurgeon. “It’s an exciting day,” Spurgeon said. “Everyone looks forward to the first home game and just...
NHL・7 DAYS AGO

Now that the 2021-22 season is underway, it’s time for some updated NHL power rankings to get a sense of
NHL・19 HOURS AGO
97.1 The Ticket

He nearly took a face full of iron when he got knocked down after his second goal and ate a whole bunch of twine instead – a trade he’ll make every time.
NHL・2 DAYS AGO
fantasyalarm.com

Welcome to another edition of the Fantasy Hockey Injury Report. The injury report is going to keep you up to date on all the important injuries going on around the league, and how that might affect your fantasy hockey team. Make sure to check back regularly for any updates. Let’s take a look at some players that are either ruled out, or that we need to monitor.
NHL・3 DAYS AGO

“Say Cheese!”: Aramark Dishes Up Re-Invented Classics at NBA and NHL Arenas for Cheezin for the Season Campaign

PHILADELPHIA--(BUSINESS WIRE)--Oct 18, 2021-- As hockey and basketball fans fill arenas across North America this season, they will be treated to a menu of new dishes, branded concepts, and service innovations from Aramark (NYSE: ARMK), the food and beverage provider at seven National Hockey League (NHL) and National Basketball Association (NBA) arenas.
NBA・9 DAYS AGO
Chicago Tribune

‘Don’t hit the panic button now’: Chicago Blackhawks players say the season isn’t slipping away despite an 0-5-1 record — the worst start in the NHL

Kirby Dach holds on to the 2018-19 St. Louis Blues for inspiration as the Chicago Blackhawks try to keep pressing on after an 0-5-1 start. The Blues started 7-10-3 that season, losing five of six games during one stretch in November. They went on an 11-game winning streak in February, finished third in the Central Division to qualify for the playoffs and won the franchise’s first Stanley Cup. ...
NHL・1 DAY AGO
Chicago Tribune

Stan Bowman established himself in the hockey world when the Chicago Blackhawks won the Stanley Cup in 2010, his first season as general manager. That same year, Hawks upper management failed to act on a player’s sexual assault claim until after the championship was secured, according to a law firm’s independent review. The damning details in that report, released Tuesday, came at a high cost ...
NHL・21 HOURS AGO
670 The Score

Blackhawks center Jonathan Toews and center Henrik Borgstrom on Tuesday were both placed in COVID-19 protocol and won’t practice. The Blackhawks now have five players in the protocols.
NHL・22 HOURS AGO