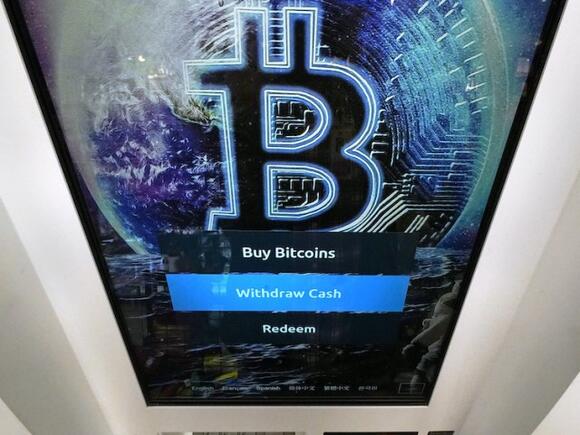 BEIJING — China's central bank has declared all transactions involving Bitcoin and other virtual currencies illegal, stepping up a campaign to block the use of unofficial digital money.

Chinese banks were banned from handling cryptocurrencies in 2013, but the government issued a reminder this year. That reflected official concern cryptocurrency mining and trading might still be going on or the state-run financial system might be indirectly exposed to risks.

The central bank complained Bitcoin, Ethereum and other digital currencies disrupt the financial system and are used in money-laundering and other crimes.

The People's Bank of China is developing an electronic version of the country's yuan for cashless transactions that can be tracked and controlled by Beijing.

Can anything stop rising inflation? asks Daniel Moss on Bloomberg. How about a Chinese slowdown? The world’s second-biggest economy grew at a record 18.3% year-on-year in the first quarter of the year but has slowed sharply. GDP rose by an annual 4.9% in the third quarter, the slowest pace in a year and down from the 7.9% rate recorded between April and June, says Katie Silver for the BBC. Soaring commodity prices have seen many provinces impose electricity rationing, which is weighing on industries such as cement, steel and aluminium smelting.
BUSINESS・1 DAY AGO
POLITICO

A formal move to green-light crypto trading by banks would probably be met with resistance by advocates of tough financial rules.
POTUS・20 HOURS AGO
GOBankingRates

It’s important to know what you’re getting into before you buy into cryptocurrency. Find out how these top picks compare and what to consider before investing.
STOCKS・4 HOURS AGO
SmartAsset

The COVID-19 recession may have gotten you thinking about how to preserve your wealth. Many investors consider store-of-value assets like Bitcoin and gold as ways to preserve wealth. For example, gold has thousands of years behind it as a universally … Continue reading → The post Bitcoin vs. Gold: Which Should You Buy? appeared first on SmartAsset Blog.
MARKETS・1 DAY AGO

WASHINGTON (AP) — U.S. officials are issuing new warnings about China’s ambitions in artificial intelligence and a range of advanced technologies that could eventually give Beijing a decisive military edge and possible dominance over health care and other essential sectors in America. The warnings include a renewed effort to inform business executives, academics and local and state […]
FOREIGN POLICY・1 DAY AGO
Markets Insider

Jones, the founder and chief investment officer of Tudor Investment Corporation, told CNBC he has crypto in single digits in his portfolio.
ECONOMY・3 DAYS AGO
SmartAsset

How to Invest in Blockchain

Blockchain is a peer-to-peer distributed ledger technology (DLT) system that is decentralized. It makes the records of digital transactions transparent and unchangeable. Blockchain is a relatively new and exciting technology that has gained a lot of interest from investors. Some think … Continue reading → The post How to Invest in Blockchain appeared first on SmartAsset Blog.
MARKETS・1 DAY AGO
AFP

Australia delivered a withering denunciation of China's trade policies Thursday, accusing Beijing of undermining the World Trade Organization and foot-dragging on promised economic reforms.  Experts see China's sanctions on Australia as a thinly veiled message to countries across the Pacific: that challenging Beijing politically will come with serious economic cost.
ECONOMY・2 DAYS AGO

A major Chinese real estate developer whose struggle to avoid defaulting on billions of dollars of debt rattled financial markets says it has called off the sale of a $2.6 billion stake in a subsidiary and has made no progress in selling other assets.China Evergrande Group's planned sale of 50.1% of its property management unit to a rival, Hopson Development Holdings, was canceled because the buyer “had not met the prerequisite to make a general offer for shares,” Evergrande said late Wednesday in a statement through the Hong Kong stock exchange. It gave no other details.Evergrande’s struggle to reduce...
REAL ESTATE・2 DAYS AGO
The Independent

China has removed Caixin Media, one of the country’s most independent business news sites, from a list of news outlets whose content can be republished by other internet news providers. The move is in line with the ruling Communist Party’s efforts to tighten control over the flow of information. Caixin is privately funded, unlike most state-run media. The Cyberspace Administration of China dropped it from a list of more than 1,300 news outlets and government agencies whose content can be republished. Internet platforms are barred from publishing content from non-approved sources. Caixin was on the previous list, published in...
ECONOMY・2 DAYS AGO
Tom's Hardware

China allegedly discovered a number of cryptocurrency mining operations stealing power from universities, state-owned companies and government agencies. Bloomberg reported that numerous Chinese media outlets and government organizations described the crackdown on these electricity thieves. Miners in the Jiangsu province were said to have used 260,000-kilowatt hours of electricity each day, for example, even though just one-fifth of the 4,500 IP addresses associated with illicit mining were traced back to public institutions.
ECONOMY・4 DAYS AGO
PC Gamer

Steam bans all games with NFTs or cryptocurrency

Valve has quietly delivered a new edict: No NFTs or cryptocurrency on Steam. The recently updated Steam distribution onboarding guidelines specifically ban any "applications built on blockchain technology that issue or allow exchange of cryptocurrencies or NFTs." In short, NFTs are unique digital receipts (stored on a blockchain, a sort...
VIDEO GAMES・7 DAYS AGO
zycrypto.com

China’s judiciary is reportedly preparing a legal interpretation of the country’s new crypto regulations to be used in prosecuting defaulters. The new regulations which will reach even foreign entities has crypto-market participants worried. Number of crypto-businesses leaving China continues to grow. China’s cryptocurrency regulation is about to enter a new...
ECONOMY・8 DAYS AGO
cryptonews.com

Get your daily, bite-sized digest of cryptoasset and blockchain-related news – investigating the stories flying under the radar of today’s crypto news. The US Commodity Futures Trading Commission (CFTC) said it has issued an order simultaneously filing and settling charges against Tether Holdings Limited, Tether Limited, Tether Operations Limited, and Tether International Limited (d/b/a Tether) for making untrue or misleading statements and omissions of material fact in connection with the most popular stablecoin, tether (USDT). The order requires Tether to pay a civil monetary penalty of USD 41m. Also, the CFTC issued a separate order simultaneously filing and settling charges against iFinex Inc., BFXNA Inc., and BFXWW Inc. (d/b/a Bitfinex) in connection with their operation of the Bitfinex crypto trading platform. The order finds Bitfinex engaged in illegal, off-exchange retail commodity transactions in digital assets with US persons on the trading platform and operated as a futures commission merchant (FCM) without registering as required. The order requires Bitfinex to pay a USD 1.5m civil monetary penalty.
MARKETS・8 DAYS AGO
AFP

It is not available in China but Netflix's global sensation Squid Game has already built up a huge following in the country, with fans dodging strict internet controls to stream the show and snapping up merchandise such as its unique outfits. "Our assessment is that Squid Game, which is gaining global popularity, is being illegally distributed on around 60 sites in China," Jang said, testifying remotely from Beijing.
TV & VIDEOS・10 DAYS AGO
Reuters

SHANGHAI, Oct 11 (Reuters) - China's National Medical Products Administration said on Monday that it had launched a crackdown on online and offline sales of illegal cosmetics. The regulator said on its website that it would inspect medical claims made by cosmetic products and clean up sales of unregistered cosmetic products.
CHINA・11 DAYS AGO
Motley Fool

Should China's Ban on Cryptocurrencies Affect Your Investment Plans?

In late September, China declared that all transactions related to cryptocurrency investments were now illegal. This includes trading cryptocurrencies as well as issuing tokens or derivatives. The ban also applies to offshore cryptocurrency exchanges, which had been serving customers in response to a ban on domestic exchanges. These are now prohibited from serving anyone in mainland China. Mining cryptocurrency was also forbidden throughout the entire nation.
MARKETS・12 DAYS AGO
zycrypto.com

China’s largest crypto exchange Huobi reveals there’s no hope as it called quits long before the ban. It appears that business had become unbearable to continue for China’s leading cryptocurrency exchange as it has been revealed that they had already made a decision to quit the country even before the latest leg of intensified crypto-industry crackdowns were announced late last month.
MARKETS・12 DAYS AGO
FOXBusiness

China has added cryptocurrency mining to a draft list of industries in which investment is restricted or prohibited, although it reduced the number of sectors on the list overall, a document released by the state planner showed on Friday. The "negative list" details sectors and industries that are off-limits to...
MARKETS・14 DAYS AGO
Reuters

Oct 21 (Reuters) - A merger with former U.S. President Donald Trump's new social media venture has delivered a potential windfall of $420 million for a former finance executive who has been trying for a decade to reinvent himself as a serial dealmaker. Benessere Capital CEO Patrick Orlando's stake in...
POTUS・1 DAY AGO