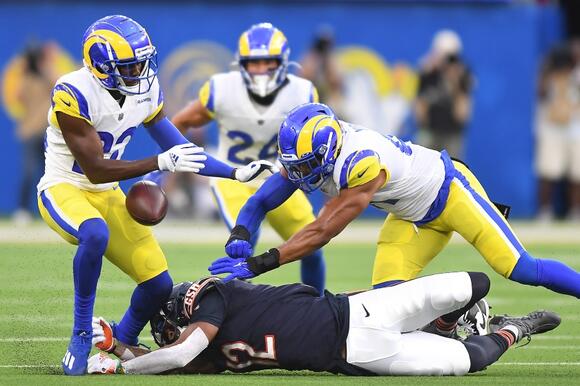 The most-talked about game in the NFL this week is what could be an NFC championship preview. Sean McVay and Bruce Arians sure wouldn’t mind if that were the case. The Rams and the Tampa Bay Buccaneers probably should have drawn the prime-time billing on NBC, but they’ll be the most intriguing game in the 1 p.m. PT window instead.

We’ve seen some rather fascinating line movement here, as sharp bettors have determined a side and everybody involved has determined a play on the total.

So far, so good in the Matthew Stafford era. The Rams are 2-0 , though they did fail to cover against the Indianapolis Colts. The line was -3 or -3.5 and the Rams won 27-24 in a game in which they trailed in for only 2 minutes 9 seconds. The Colts took a 21-17 lead in the first minute of the fourth quarter. The Rams marched right downfield and then won on Matt Gay’s 38-yard field goal with 2:23 left.

It was a win for the Rams, but the loss of running back Darrell Henderson Jr. put a damper on things. Henderson is unlikely to play this week, which means that Stafford will be plenty busy with a limited running game.

That looks to be a concern for the Rams. Last week, they at least gave the illusion of trying to run and had 101 yards in 29 carries. Stafford threw 30 times, with nine receptions on 11 targets from Cooper Kupp. Kupp is the only player Stafford has targeted at least nine times. The Rams are fifth in the NFL in yards per play but have only run 110 plays to this point.

The offense has been very deliberate. Against Tom Brady and the Buccaneers, that strategy might not work. Tampa Bay has increased its rate of pre-snap motion and the number of five-wide sets, so the game plan for the Buccaneers is to throw, throw, and keep throwing. And why not? With a surefire Hall of Famer in Brady and a bevy of weapons, it makes sense.

Though Brady’s seventh Super Bowl ring earned all the attention, it was actually the play of the defense that should have received the accolades. We haven’t seen the same disruption from Tampa’s front four to this point, as the Bucs have only two sacks this season. The Bucs do have two pick-sixes from Mike Edwards.

The keys to this game are whether Stafford can find somebody other than Kupp to be productive and if the Rams' secondary can cover enough players to make life tough on Brady. John Johnson and Troy Hill played such a big role with 16 starts each in 2020. This game will show just how ready Jordan Fuller and Taylor Rapp are for the bright lights.

Sharp money has been on Tampa Bay. Some books opened Rams -1 and most of the market is now -1.5 on the Bucs. Public money doesn’t show up until later in the week, so bettors with influence are on the Buccaneers. I tend to agree.

However, rather than lay the -1.5 in a game that could end up being close, the Buccaneers are at a cheap moneyline price of -120, which is more equitable than -1.5 at -110 juice.

The couple's tweets over the weekend had plenty of users speculating.
NFL・7 DAYS AGO
NESN

FOXBORO, Mass. — After nearly leading the New England Patriots to an unlikely victory Sunday night, Mac Jones met his predecessor, Tom Brady, at midfield. Their interaction was brief, a quick exchange of congratulations and well-wishes. Jones said Brady left him with a simple message. “He just told me to...
NFL・21 DAYS AGO
Larry Brown Sports

A Tampa Bay Buccaneers fan briefly found himself in possession of an incredibly valuable piece of memorabilia on Sunday, and the team has promised to reward him for giving it back. Mike Evans caught a touchdown pass from Tom Brady in the first half of Tampa Bay’s game against the...
NFL・1 DAY AGO
The Big Lead

Golden Tate Is Right About Matthew Stafford and Aaron Rodgers

Matthew Stafford has always been good enough to win a Super Bowl. Multiple Super Bowls, in fact. People couldn't grasp that because he was in football hell with the Detroit Lions, where his best efforts only resulted in frustration and a goose egg in the playoff wins department. It's taken three weeks for the new Los Angeles Rams quarterback to turn skeptics into believers, moving his side above all others to the very real but not legally binding status as potential Super Bowl favorite.
NFL・28 DAYS AGO

The Arizona Cardinals are the last undefeated team in the NFL, and have finally reached the top of our Power Ranking.
NFL・4 DAYS AGO
The Spun

The Chicago Bears (3-3) seek to get over .500 in Week 7 by taking on the Tampa Bay Buccaneers (5-1) in a late afternoon game in Florida. Kickoff is 4:25 p.m. ET at Raymond James Stadium. Below, we look at the Bears vs. Buccaneers odds and lines; check back for our NFL picks and predictions.
NFL・6 DAYS AGO
Sportsnaut

The NFL injury report is always filled with some of the game’s best stars, leaving fans and fantasy football managers
NFL・12 HOURS AGO

Check-in here throughout the year for the NFL games today full weekly schedule. Including links to Sportsnaut’s season forecasts for
NFL・13 HOURS AGO
Sportsnaut

NFL MVP odds 2021: Derrick Henry makes push, but which QB is on top?

The NFL MVP odds have received a big update as we near the trade deadline of the 2021 NFL season,
NFL・3 DAYS AGO
playpennsylvania.com

The Philadelphia Eagles (+3) shook off a sloppy first half to rally for an outright 21-18 win against the Carolina Panthers. The Eagles picked off Carolina quarterback Sam Darnold three times which helped keep the game under the total points line (46.5). The Birds won’t have much time to savor...
NFL・14 DAYS AGO
Sportsnaut

The visiting Detroit Lions battled but ultimately succumbed to a more complete team in the Los Angeles Rams, who won
NFL・23 HOURS AGO

Discover player props odds, plays, and insights for Chris Godwin in his Week 6 contest with the Tampa Bay Buccaneers against the Philadelphia Eagles.
NFL・12 DAYS AGO
fox29.com

The banged-up New York Giants will face the Los Angeles Rams in the 44th meeting between two of the NFL's signature franchises. The Rams hold a 28-17 edge in the all-time series, which dates back to 1938. Los Angeles has won the past two meetings against the Giants, snapping New...
NFL・14 DAYS AGO
Sports Illustrated

Discover player props odds, plays, and insights for Leonard Fournette in his Week 6 contest with the Tampa Bay Buccaneers against the Philadelphia Eagles.
NFL・11 DAYS AGO
FanSided

Now, that’s how you get things done. How about that come-from-behind victory in Charlotte? If the Philadelphia Eagles could take how they play during the fourth quarter of games and extrapolate that over four quarters, we all might be in business here. In the meantime, seeing as how this can...
NFL・14 DAYS AGO
vavel.com

The match will be broadcasted through Fox Sports and NFL Network. If you prefer to follow it live online, remember that USA is your best option. The Tampa Bay team leads the National Conference South with a four-game winning streak and a one-game losing streak, ahead of teams like the Saints, Panthers and Falcons.
NFL・11 DAYS AGO
ClutchPoints

The Tampa Bay Buccaneers and Philadelphia Eagles will kick off Week 6 on Thursday Night Football. It’s time to continue our NFL odds series and make a Buccaneers-Eagles prediction and pick. It seems like the Buccaneers have recovered from their Week 4 loss to the Los Angeles Rams without any...
NFL・12 DAYS AGO
Sporting News

Week 5 of the 2021 NFL season continued the theme of chaos that we saw in the early weeks of the season. The Bills were able to upset thte Chiefs and drop the reigning AFC Champions to 2-3 on the year. The Chargers knocked off the Browns in a game that saw 89 combined points scored. The Steelers and Bears earned impressive upset wins over favored AFC West teams.
NFL・11 DAYS AGO
SportsGrid