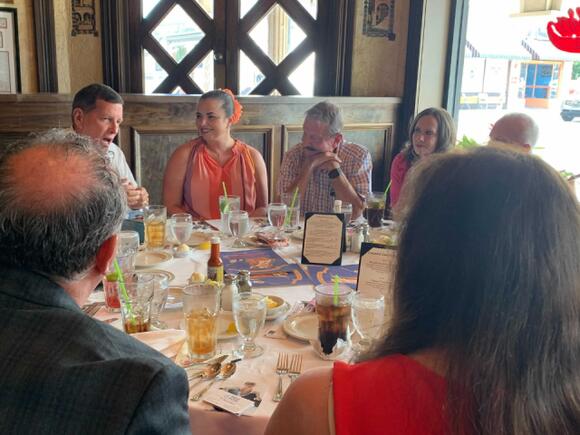 Florida’s oldest steel company is celebrating its 75th anniversary. However, if you ask the man in charge of Tampa Steel Erecting Company, the celebration is really all about the community.

Bob Clark is a hands-on business owner, it’s one of the reasons Tampa Steel Erecting Company has lasted three-quarters of a century.

“From '75 to '90 we were doing the major projects around this state like Spaceship Earth at the main entrance to Epcot,” said Clark.

Currently, they're in the process of building a 480-foot-long bridge, but it’s the bridges he’s built within the community that Clark is most proud of.

“We’re all promoting one another here in Tampa,” said Clark.

Inside his office, Clark flips through photos dating back 20 years. They are all taken around the same table, inside the same restaurant, The Columbia.

“Somebody was talking about how they felt like since they were invited to a Friday lunch they have arrived, they finally arrived in Tampa,” said Clark.

Bob makes sure he is the first to sit down every Friday. By noon the table is filled with different invited guests from various industries and backgrounds. Let the networking begin.

“The city and God and everybody has been good to me and so whenever I see my friends excel I feel like I’m accomplishing something if I can help,” said Clark.

Kari Goetz credits her entire career to the time she has spent around the table with Clark.

While Dana Nafe, of Brown and Brown Insurance, said the lunch may only last an hour but the partnerships that are built can last a lifetime.

“Bob is truly selfless, I mean he truly does try to just connect people and try to help everybody get to where they want to go,” said Nafe. “Almost anything that you think of there is a stack of cards on my desk from these Bob lunches and usually they are somebody that I can connect with.”

Clark picks up every check. The only thing he asks for in return is for the city to keep moving in the right direction.

“The people that you meet at this lunch were all dedicated to making the Tampa Bay area a better place and that’s what you get out of a Bob Clark lunch,” said Goetz.

Jennifer Koszewnik, a breast cancer patient, was honored by the Tampa Bay Buccaneers as the AdventHealth Goal Getter of the Game.
1 HOUR AGO
ABC Action News WFTS

St. Pete business finds themselves in turf war with the city

A St. Petersburg artificial turf company is finding themselves in a turf war themselves with the city.
18 HOURS AGO
ABC Action News WFTS

Midwest Food Bank Florida opened a warehouse in Polk County in 2020 and saw its distribution numbers go up more than 130%.
3 HOURS AGO

Halloween animatronics burn to the ground at St. Pete home

A St. Pete woman is hoping someone will come forward with information about who showed up at her house on Friday morning and set fire to three of her Halloween animatronics.
ENTERTAINMENT・21 HOURS AGO
ABC Action News WFTS

A Pasco County community is honoring the life of a teacher they lost to COVID-19 complications last year, with a pumpkin patch, and all the proceeds are going back to the profession she loved so much.
PASCO COUNTY, FL・1 DAY AGO
ABC Action News WFTS

Brides across Tampa Bay are accusing a local florist of charging thousands of dollars for flowers that never made it to the wedding.
RELATIONSHIPS・14 HOURS AGO
ABC Action News WFTS

The Florida Department of Transportation will start work on a major project Monday as it begins the multi-year process of widening a busy section of I-275.
TAMPA, FL・13 HOURS AGO

In Highlands County, there's a non-profit that's providing fresh foods and meals for residents. The Heartland Food Bank serves more "behind the scenes" to distribute food to about 40 other non-profits in Highlands County.
HIGHLANDS COUNTY, FL・3 DAYS AGO
ABC Action News WFTS

Lost Mines of Atlantis is a fun roadside attraction

The Lost Mines of Atlantis in Sebring is a roadside attraction fun for the whole family.
ATLANTIS, FL・3 DAYS AGO

The city on the circle, downtown Sebring is truly the heart of the area. Nearly 11,000 people live in the city and it's continuing to grow. ABC Action News spoke to the Downtown Sebring Community Redevelopment Agency who said they're working to bring in more businesses, too.
SEBRING, FL・3 DAYS AGO
ABC Action News WFTS

Tampa Bay restaurants plead: 'Please be kind when you dine'

Restaurants are feeling the growing demand as an industry that has struggled to restaff since the start of the pandemic.
RESTAURANTS・6 DAYS AGO
ABC Action News WFTS

Downtown Sebring on the circle you'll find the Sebring Soda and Ice Cream works. Liz Barber and her husband bought the business about three years ago. They find unique, craft sodas from all over the world. In fact, they have about 150-200 craft sodas at any given time.
SEBRING, FL・3 DAYS AGO
ABC Action News WFTS

The Children's Museum of the Highlands has been entertaining and enlightening the children of Sebring for the past 20 years with hands on activities.
SEBRING, FL・3 DAYS AGO

For the last five years, a local man has been volunteering at CASA Pinellas and taking on the role of being everyone's grandpa.
PINELLAS COUNTY, FL・4 DAYS AGO
ABC Action News WFTS

It’s a simple screening that could save your life: a mammogram. Doctors and breast cancer awareness advocates in the Tampa Bay area are reminding people even during the pandemic, you still need to get your regular screening.
TAMPA, FL・3 DAYS AGO
ABC Action News WFTS

John C Marsh Jr. started making gnomes as a hobby during the pandemic and soon realized that there would be a demand for them.
TAMPA, FL・7 DAYS AGO