By Julia Manchester
The Hill
30 days ago 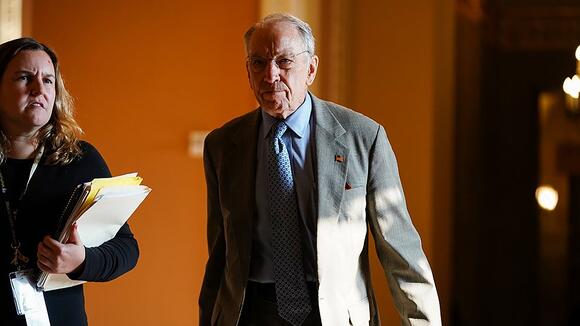 Sen. Chuck Grassley (R-Iowa) on Friday announced that he's running for reelection in 2022, seeking an eighth term in the upper chamber.

Grassley made the announcement on Twitter at 4 a.m., with a GIF of him going out for a morning run.

"It’s 4 a.m. in Iowa so I’m running. I do that 6 days a week. Before I start the day I want you to know what Barbara and I have decided," Grassley tweeted. "I’m running for re-election—a lot more to do, for Iowa. We ask and will work for your support. Will you join us?"

The Des Moines Register reported that the senator is set to take part in a number of campaign events on Friday and will appear with Gov. Kim Reynolds (R), who is also seeking reelection, on Saturday.

The news comes after Grassley remained mum for months on his reelection plans despite national Republicans urging the 88-year-old to jump into the race. Grassley won his last reelection bid in 2016 by a whopping 25 points.

The GOP is looking to take back the Senate next year and will lean on the longtime senator in that fight.

A separate Des Moines Register-Mediacom survey released in June showed that 64 percent of Iowans think it’s time for someone else to hold Grassley’s seat, but that poll did not name any specific candidates.

Finkenauer responded to Grassley's reelection campaign launch in a statement on Friday, taking aim at his decades in Congress.

“After 47 years in Washington, D.C., Chuck Grassley has changed from an Iowa farmer to just another coastal elite. Over his nearly five decades in Congress, Iowa has lost over 30,000 family farms, our jobs have been shipped overseas, and decade after decade our rural communities have been hollowed out with our young people leaving in droves as he stood on the sideline," Finkenauer said.

"Meanwhile, Senator Grassley and his friends in the DC elite got richer while working families were left behind. Now, he’s running yet again on an agenda that puts big pharma over our seniors, Wall Street over workers, and monopoly corporations over the mom and pop small businesses that make Iowa strong."

Iowa Republican Congressman Randy Feenstra has formally announced he is running for reelection in the state’s 4th District, as was widely expected. A former college professor and state senator, Feenstra has been endorsed by the state’s leading Republicans. Officially launching his reelection bid Wednesday, Feenstra says he wants to continue...
IOWA STATE・4 DAYS AGO
KELOLAND TV

SIOUX CITY, Iowa (KCAU) — A retired admiral for the U.S. Navy and Sioux City resident has announced his intention to unseat Sen. Chuck Grassley of Iowa. Mike Franken, originally from Sioux Center, made the announcement Thursday morning, saying leadership is doing what is right. Franken notes that an instance of doing what is right was his 2002 ‘no’ vote against the invasion of Iraq. He said he was one of the “junior officers at the table and under pressure to ‘go along.'”
9 DAYS AGO
5newsonline.com

LITTLE ROCK, Ark. — Republican Sen. John Boozman's campaign says it's raised more than $1.1 million over the past three months for his reelection bid. The campaign for the two-term senator from Arkansas said Wednesday that it had more than $2.7 million cash on hand. Friday is the deadline for...
LITTLE ROCK, AR・11 DAYS AGO
fox40jackson.com

DES MOINES, IOWA – Republican Sen. Chuck Grassley cut straight to the chase when asked if he’d gladly accept the support of former President Trump as the longtime lawmaker from Iowa runs next year for an eighth six-year term in the Senate. “Anybody who’s got the approval rating of 91%...
IOWA STATE・13 DAYS AGO

WILKES-BARRE — Republican Hazle Twp. resident Jim Bognet is seeking a rematch against Democratic U.S. Rep. Matt Cartwright in next year’s election, vowing to topple the fifth-term congressman by linking him to unpopular liberal policies. Bognet, who lost to Cartwright in a 2020 challenge, announced his entry into the race...
WILKES-BARRE, PA・5 DAYS AGO
KEYT

Two long-time House Democrats, North Carolina’s David Price and Pennsylvania’s Mike Doyle, announced Monday that they will not seek reelection in 2022. Price, first elected in 1986, and Doyle, first elected in 1994, both represent districts that President Joe Biden carried comfortably in 2020. But the retirement of long-serving lawmakers may reflect worries about Democrats holding onto the House next year. The party out of the White House traditionally suffers midterm loses after the election of a new president.
PRESIDENTIAL ELECTION・6 DAYS AGO
IBTimes

A website administrator that many consider to be behind the QAnon conspiracy movement that fired up supporters of Donald Trump has announced he will run for a Republican seat in Congress. Ron Watkins announced in a video posted on Telegram Thursday that he would contest a House of Representatives seat...
U.S. POLITICS・9 DAYS AGO
dakotanewsnow.com

SIOUX FALLS, S.D. (Dakota News Now) - State Representative Taffy Howard announced Tuesday her bid for U.S. Congress. Rep. Howard, a Republican, has served in the South Dakota State House since 2017 and is a US Air Force veteran and a businesswoman. “We need more of South Dakota in Washington...
CONGRESS & COURTS・12 DAYS AGO

The bulk of Harrell's September haul came from Sen. Ben Albritton's Political Committee. Sen. Gayle Harrell raised $18,500 last month toward her reelection, which has not yet drawn an opponent. Between her personal campaign account and her committee, Friends of Gayle Harrell, the Stuart Republican has a total of $137,532...
CONGRESS & COURTS・13 DAYS AGO
Fox News

Former President Barack Obama traveled to New Jersey on Saturday to campaign for Gov. Phil Murphy and claimed that he understands why Americans are questioning when COVID-19 mandates will end. BIDEN LEANS MORE ON OBAMA WITH WHITE HOUSE UNDER PRESSURE FROM MULTIPLE CRISES. "The science says it's the right thing...
POTUS・21 HOURS AGO

In his Opening Monologue on Friday, Sean Hannity ripped President Joe Biden for what he characterized as hypocrisy after reports surfaced that the Delaware Democrat will have a fence built around his summer home in Rehoboth Beach at the expense of the U.S. taxpayer. Hannity went on to criticize the...
DELAWARE STATE・1 DAY AGO
Newsweek

The St. Louis Post-Dispatch editorial board said the "shameful roster" is "once again running interference for a lawless ex-president."
PRESIDENTIAL ELECTION・1 DAY AGO
Business Insider

Wife of Rep. Mike Kelly may have used 'confidential information' she got via her husband to reap thousands in a stock, report says

Victoria Kelly purchased thousands of stock in a company for which her husband was securing federal support, an ethics watchdog report says.
ERIE, PA・23 HOURS AGO
POLITICO

Axing either of the two provisions would infuriate progressives and alienate valuable voting blocs. Yet the party might just have to.
CONGRESS & COURTS・12 HOURS AGO

Eric Trump mocked America's top general for running "sensitivity training" for the military while China tested nuclear-capable hypersonic missiles, at a conference attended by throngs of QAnon supporters and vaccine conspiracy theorists. The son of the former president gave one of the strongest hints yet that Donald Trump was plotting...
POTUS・8 HOURS AGO
TheDailyBeast

Every Day, Biden Smells Like More of a Loser

With a hint of confusion in his eyes and a whiff of failure in the air around him, Joe Biden is watching his approval ratings continue to plummet to the point where just 42 percent of Americans approve of his job performance. Which makes sense, since at least so far...
PRESIDENTIAL ELECTION・1 DAY AGO
Business Insider

Since the start of her political career, pharmaceutical companies have lobbied Sinema and financed her campaign committee and leadership PAC.
CONGRESS & COURTS・4 HOURS AGO