By Sarah Rendell
The Independent
22 days ago 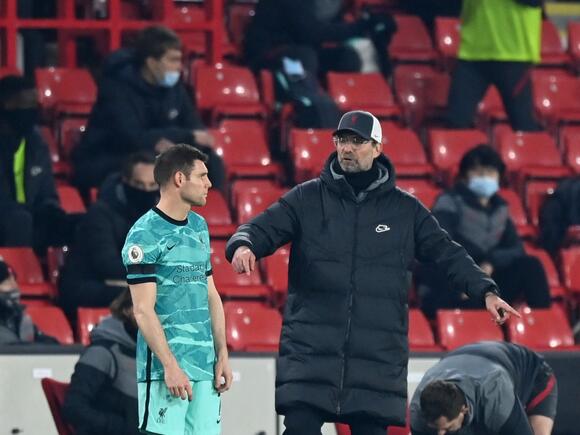 Liverpool manager Jurgen Klopp “almost had a physical fight” with James Milner after a game, according to ex-Reds defender Ragnar Klavan .

The supposed incident is said to have taken place in 2017 in the dressing room after a 2-2 Premier League draw with Sunderland. Klavan says the pair squared up to each other before Milner backed down.

He told the Betsafe Eesti Podcast: “The biggest pressure was around Christmas and at the beginning of January. One time, I don’t remember who we played against – maybe it was against Sunderland away.

“Klopp and James Milner almost started a physical fight. It was the period when there was Boxing Day in England and they almost started fighting, but eventually Milner stepped back.

“We saw from his eyes that Klopp would have gone all the way just to prove his point. It was the most stressful time for him as well. He was under a lot of pressure. It was my first and Klopp’s second year.

“What are you going to do? You’re supposed to be a good coach. You are Jurgen Klopp, who will make superstars of all players. The pressure started getting to him.

“It’s not supposed to be easy, but if you don’t deliver against a team like Sunderland, then you can forget about the places you had hoped for.”

Liverpool finished fourth that season and while the manager’s passion may spill over, he did channel that into a Champions League trophy and a Premier League title in the next two campaigns, respectively.

Jurgen Klopp: Liverpool manager says vaccine is 'not a limit on freedom'

Liverpool manager Jurgen Klopp says he does not understand why some people refuse the coronavirus vaccine. There have been concerns about the rate of vaccination in the Premier League with fewer than half of players jabbed at most clubs. Klopp says "99%" of his players have been vaccinated and he...
PREMIER LEAGUE・14 DAYS AGO
LFCTransferRoom

Comparing Liverpool's transfer budget to the likes of Manchester City, Chelsea and Manchester United is a scary thing for fans. The previously mentioned clubs all have owners that invest their own money into the club. Liverpool don't really have that with FSG. There's positives and negatives to how Liverpool's owners...
PREMIER LEAGUE・14 DAYS AGO
ESPN

Liverpool manager Jurgen Klopp likened refusal to take the COVID-19 vaccine to drink-driving, saying such people endanger others. Klopp said he took the vaccine to protect not just himself but "all the people around me." The 54-year-old also said that "99%" of his Liverpool players are vaccinated and that he did not have to convince anyone to do so.
PREMIER LEAGUE・13 DAYS AGO
The Independent

Liverpool midfielder James Milner is a reluctant full-back but manager Jurgen Klopp hopes he will look back on the experience with pride.Any time there is an injury to a key position the veteran, who turns 36 in January, is wheeled out as a dependable deputy.For the last two matches he has been filling a Trent Alexander-Arnold-sized hole at right-back while the England international is sidelined with a groin injury.Milner has also had to do a similar job on the other side when Andy Robertson has been unavailable but he is, understandably as a right-footer, more comfortable on the right –...
PREMIER LEAGUE・14 DAYS AGO

Playing under Jurgen Klopp, there is no easy positions but one of the hardest positions to master for the German tactician is midfield. Klopp doesn't just ask his midfielders to either create or defend, he asks them to do about 10 different roles at once. From pressing forward to covering...
PREMIER LEAGUE・14 DAYS AGO
thedigitalfix.com

Now that Daniel Craig’s drank his last martini and sailed off into the sunset, people are already starting to speculate – who will be the next James Bond? Could it be Idris Elba, might it be Tom Hardy, would they consider a woman in the role?. Well, he may have...
WORLD・11 DAYS AGO
The Independent

Pep Guardiola has admitted that his rivalry with Jurgen Klopp has made him a “better manager”. Liverpool host Manchester City in another top-of-the-table Premier League clash on Sunday and ahead of the match, Guardiola has praised his German counterpart. “He helped me, his teams helped me to be a better...
PREMIER LEAGUE・14 DAYS AGO
LFCTransferRoom

James Milner will most likely go down as Liverpool's best ever free transfer. He's also a good shout for the all-time best free transfer in the Premier League. Since joining Liverpool in 2015 from Manchester City, Millie has been the ultimate professional and the Anfield faithful have fell in love with him.
PREMIER LEAGUE・14 DAYS AGO

Liverpool manager Jurgen Klopp insists he didn't see James Milner's incident against Manchester City. Pep Guardiola was fuming on the sidelines as Milner escaped punishment for a second yellow card after a poor challenge on Bernardo Silva. Milner was withdrawn shortly after and Klopp says he was always planning on...
PREMIER LEAGUE・13 DAYS AGO
chatsports.com

Mo Salah scored an absolute stunner as Liverpool drew with Man City at Anfield. Mo Salah took much of the acclaim as his individual brilliance saw him score and assist once in a Premier League classic between Liverpool and Man City at Anfield. Salah jinked his way around a bemused...
PREMIER LEAGUE・13 DAYS AGO
CityXtra

The Sky Blues will be hoping to return to winning ways following their 2-0 defeat against PSG in the Champions League on Tuesday. With the likes of Mohamed Salah and Sadio Mane in fine goalscoring form, Liverpool will prove to be a tough opposition for City, who will be aiming to make it two in two against the Merseyside outfit on their own patch.
PREMIER LEAGUE・13 DAYS AGO

When Jurgen Klopp came in for Brendan Rodgers in 2015, you could tell straight away the difference in class between the two managers. Rodgers was still a relatively young manager and Klopp was entering his prime, which he's still in now. After the 2013/14 heartbreak season, Rodgers team got dismantled...
PREMIER LEAGUE・12 DAYS AGO
chatsports.com

Liverpool boss Jurgen Klopp laughs off rivals Man City's lack of a No 9 as a 'luxury problem'... and says Premier League champions would be EASIER to play if they had a recognised striker

Not only are Jurgen Klopp and Pep Guardiola outstanding managers, they express themselves more colourfully in a second language than many do in their native tongue. For Klopp, the fuss about Manchester City not having a recognised striker is a ‘luxury problem’ given the champions have already posted 14 goalscorers this season.
PREMIER LEAGUE・13 DAYS AGO
Tribal Football

Liverpool boss Jurgen Klopp says he's fully committed to his contract. Klopp has been linked with Barcelona in the past week. He is keen to emphasise he still has plenty of time remaining on Merseyside. "I still have three years left at Liverpool and that's a long, long time in...
PREMIER LEAGUE・9 DAYS AGO
LFCTransferRoom

‘It’s a second yellow, simple as that’ - Jose Enrique On Liverpool’s James Milner

One of the major talking points after the dramatic 2-2 draw between Liverpool and Manchester City on Sunday related to referee Paul Tierney’s decision not to send off James Milner. The 35 year old who was deputising at right back for the injured Trent Alexander-Arnold was walking a tightrope after...
PREMIER LEAGUE・11 DAYS AGO
fourfourtwo.com

Barcelona have added Jurgen Klopp to their managerial shortlist, according to reports. Ronald Koeman is said to be on the verge of the sack after a disappointing start to the season. Barcelona lost 3-0 to Benfica on matchday two of the Champions League, having previously been defeated by the same...
PREMIER LEAGUE・14 DAYS AGO
CBS Sports

Liverpool's recruitment team intend to keep a close eye on Olympiacos midfielder Aguibou Camara, sources close to the Greek side have confirmed to CBS Sports. Camara first caught the eye of Liverpool scouts in a Europa League match against Fenerbahce, a 3-0 win in which the youngster excelled, and they subsequently observed him in the Super League clash with Panathanaikos, the so-called derby of the eternal enemies. Representatives for Jurgen Klopp's side are expected to make more frequent trips to Athens over the coming weeks as they evaluate the suitability of the 20-year-old and assess whether he could make the transition from Greece to the Premier League.
PREMIER LEAGUE・9 DAYS AGO
ClutchPoints

Liverpool manager Jurgen Klopp singled out his former striker Andriy Voronin as the one player he’d love to have in his squad once again. Throughout his stellar coaching career, Liverpool boss Jurgen Klopp was known for his ability to see talent amongst his players. Over the years, a wide array...
PREMIER LEAGUE・9 DAYS AGO
chatsports.com

Jurgen Klopp claims he 'didn't see' the foul which could have got James Milner sent off and left Pep Guardiola outraged... as the Liverpool boss hails 'world class' Mohamed Salah

Jurgen Klopp has claimed he did not see the incident which could have led to James Milner being sent off against Manchester City. Milner, who was deputising at right back for the injured Trent Alexander-Arnold, was already on a yellow card when the Liverpool defender made a clumsy challenge on Bernardo Silva in the second half.
PREMIER LEAGUE・13 DAYS AGO