The US deported dozens of children without Haitian passports to Haiti, report says 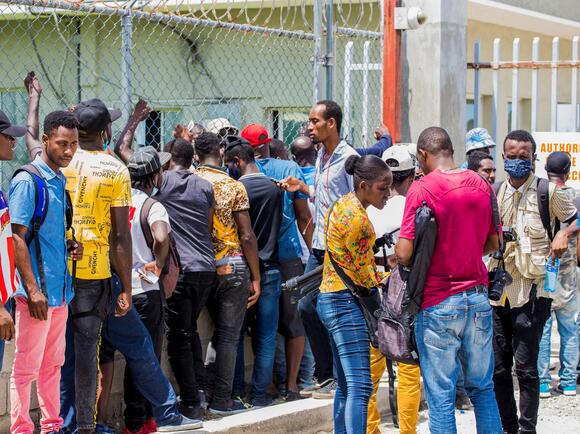 The US deported dozens of children to Haiti even though they don't have Haitian passports, CNN reported , citing the UN's International Organization for Migration.

In the past week the IOM identified a total of 170 children deported as part of US efforts to remove thousands of Haitians gathered at the US-Mexico border, CNN reported.

Forty one of them did not hold Haitian passports, the report said, citing Giuseppe Loprete, chief of mission for the IOM. Thirty had Chilean passports, nine had Brazilian passports, and two had Venezuelan passports, Loprete said.

The Biden administration has been working to break up some 14,000 Haitians who have in recent months gathered under a bridge connecting Del Rio, Texas, with Ciudad Acuña, Mexico.

The administration had justified the deportations using Title 42, a Trump-era policy which permitted US officials to expel asylum seekers and migrants because they could spread COVID-19. On September 16, a US federal judge said the US had two weeks to stop expelling families with children.

Many of those gathered at the border have already been turned back into Mexico by US Border Patrol agents. As of Thursday, around 4,000 remained at the border, the Associated Press reported , citing the Department of Homeland Security.

As of Wednesday, the US has sent at least 1,424 people back to Haiti on 12 flights, Loprete said, per CNN.

In recent years, thousands of Haitians have fled to escape political and environmental turmoil, but more have come following the recent assassination of President Jovenel Moïse and a devastating 7.2-magnitude earthquake.

The Biden administration and US Border Patrol agents are facing bipartisan criticism for their efforts.

"These are human rights abuses, plain and simple. Cruel, inhumane, and a violation of domestic and international law," Rep. Ilhan Omar tweeted .

Daniel Foote, the US special envoy for Haiti, resigned on Thursday in protest over the "inhumane" way the US was treating Haitian asylum seekers.

The Biden administration, which is struggling to control the situation at the border , now wants to open a 400-person migrant detention facility in Guantanamo Bay with the help of a private contractor, NBC News reported.

They are not migrants they are illegal invaders of our country! Impeach Biden and Harris before they completely destroy America🇺🇸

Good get them home where they belong. They're not our responsibility and we aren't going to support criminals and we shouldn't have to.

Great! Send them all back! They’re ILLEGAL IMMIGRANTS….they have no right to be in our country!

WASHINGTON — High-profile former Trump administration officials are urging border states such as Texas to declare that they’re under “invasion” by illegal immigration and use state law enforcement to return to Mexico people suspected of illegally entering the US. The provocative policy idea is outlined by Ken Cuccinelli, a former...
POTUS・23 HOURS AGO
Texoma's Homepage

EL PASO, Texas (Border Report) – With children sleeping on the side of roads and families washing up in a river, a Haitian and Central American migrant caravan continues to make its way north from Southern Mexico.
EL PASO, TX・20 HOURS AGO
Daily Mail

Texas braces for the 'mother of all caravans': 1,000 state troopers and Texas Rangers deploy to the border as 3,000 migrants prepare to arrive in days

A unit of 1,000 state police officers and Texas Rangers assigned to monitor areas along the Lone Star State's 1,241 miles of border with Mexico is readying to guard against the next surge of migrants looking to defy President Joe Biden's administration. A month has passed since Texas state law...
IMMIGRATION・1 DAY AGO
KUTV

Migrant caravan has 'no regard for the rule of law,' says ex-border official

WASHINGTON (SBG) - Thousands of migrants organized by QR code have reportedly forced their way through the Mexican National Guard on their way to the U.S. border. "The United States border control is overwhelmed, that's why we have large areas of the border wide open," said former acting commissioner of Customs and Border Protection Mark Morgan to The National Desk’s Jan Jeffcoat.
IMMIGRATION・1 DAY AGO

"...we are asked why our workers were in Haiti. We want others to enjoy the joy, peace, and redemption we have experienced," Christian Aid Ministries said.
SOCIETY・21 HOURS AGO
The Independent

A religious organization whose 17 missionaries were kidnapped in Haiti almost a week ago defended its work in dangerous places on Tuesday.The statement from Christian Aid Ministries comes as U.S. and Haitian authorities keep working to secure the release of the 12 adults and five children, including an 8-month-old, who were kidnapped Oct. 16 near the capital of Port-au-Prince “Occasionally we are asked why our workers were in Haiti,” the organization said, adding that they want to share the impact religion has had on their own lives. “We want others to enjoy the joy, peace, and redemption we have...
PUBLIC SAFETY・1 DAY AGO
AFP

Around 1,000 migrants seeking refugee status marched on Monday towards the Mexican capital, as the government faced a call by the United Nations to process the requests quickly. Asked about the caravan, UN spokesman Stephane Dujarric said Monday it was "important that migrants be treated with respect and dignity," and that requests for refugee status "be treated quickly."
IMMIGRATION・1 DAY AGO
New York Post

US secretly sending Afghans flagged as security threat to base in Kosovo: report

As thousands of Afghans are being processed to be resettled in the United States, over two dozen were flagged in the security vetting process and have been secretly transported to an American base in Kosovo, according to a new report. Around 30 Afghan evacuees, along with about 170 family members,...
IMMIGRATION・2 DAYS AGO

Caravan of Hundreds of Migrants Press North Across Mexico

HUIXTLA, Mexico (Reuters) - Hundreds of migrants from Central America and the Caribbean trekked across Mexico on Wednesday, the latest in a series of caravans that have sought to reach the U.S. border in recent months. The United States has registered record levels of migration this year, with Customs and...
IMMIGRATION・8 HOURS AGO
Matt Lillywhite

A Giant Migrant Caravan Is Headed Towards The Southern Border

According to Fox News, "a massive and organized migrant caravan is on its way from southern Mexico toward the U.S., and has already surged past a blockade by Mexican forces attempting to stop it from getting to the U.S.-Mexico border."
1 DAY AGO
Fox News

United Nations human rights experts this week criticized the U.S. for the expulsion of Haitian migrants last month in response to a surge of tens of thousands of Haitians to the southern border — with the officials accusing the U.S. of "racialized exclusion." "In expediting the collective expulsion of Haitian...
IMMIGRATION・21 HOURS AGO
Fox News

Migrant caravan containing thousands travels through Mexico toward US border: 'Tell Biden we are coming'

A massive migrant caravan organized via QR code left the town of Huehuetán in the south of Mexico Monday morning on the third day of their long trek toward the U.S. southern border. The caravan, made up of mostly Central Americans, South Americans and Haitians, is the largest and most...
IMMIGRATION・2 DAYS AGO

Migrants chanted "Libertad! Libertad! [Freedom! Freedom!]" as they made their way through the blockade. As this happened, Mexican National Guard stood by.
IMMIGRATION・2 DAYS AGO
New York Post

Migrant caravan of 2,000 in Mexico continues march to the US

A migrant caravan of about 2,000 people continues its trek clashing with police in the southern Mexico city of Tapachula over the weekend — making their way to the southern border, carrying signs with President Biden’s name. ​The migrants, mainly from Honduras and El Salvador with small children in tow,​...
IMMIGRATION・2 DAYS AGO
caribbeannationalweekly.com

A group of United Nations human rights experts Monday condemned the United State recent and ongoing systematic mass deportation of Haitian migrants and refugees, declaring them a violation of international law. According to their analysis, US policies have also deterred Haitians from pursuing protection including asylum claims and forced them...
IMMIGRATION・1 DAY AGO
Washington Post

Tired of waiting for asylum in southern Mexico, thousands of migrants march north

Yaneli Castillo fled Honduras with her two young children after gang members killed her husband in front of their house and threatened that she would be next. The 29-year-old arrived in southern Mexico four months ago and filed an asylum claim. She was still waiting for her application to be processed when new threats arrived — text messages from gang members who said they knew where to find her, she said.
IMMIGRATION・2 DAYS AGO

The program marks a major shift in U.S. refugee policy and will serve as an addition to typical resettlement processes overseen by national agencies.
IMMIGRATION・2 DAYS AGO
News 8 WROC

More than 50 Haitian and Black immigrants gathered on the steps of a federal immigration office in downtown Newark Friday, singing Creole songs and chanting calls for the Biden administration to stop deporting Black migrants. Sparked by the widely shared images of border agents on horseback dispersing migrants, demonstrators outside the U.S. Immigration and Customs […] The post Haitian immigrants rally against deportations appeared first on New Jersey Monitor.
IMMIGRATION・2 DAYS AGO
The Independent

More than 2,000 mostly Central American migrants walked along a highway in southern Mexico toward the town of Huixtla Monday where security forces had deployed, possibly signaling that authorities would soon try to break up the group.About 100 National Guard soldiers and immigration agents waited just outside Huixtla. Authorities have dissolved other migrant groups in the area during other recent attempts.The migrants set out early Saturday from Tapachula, near the Guatemala border, where thousands of migrants have spent months waiting for asylum applications or other visas that would allow them to transit Mexico. The government has used a...
IMMIGRATION・2 DAYS AGO