By Via AP news wire
The Independent
26 days ago 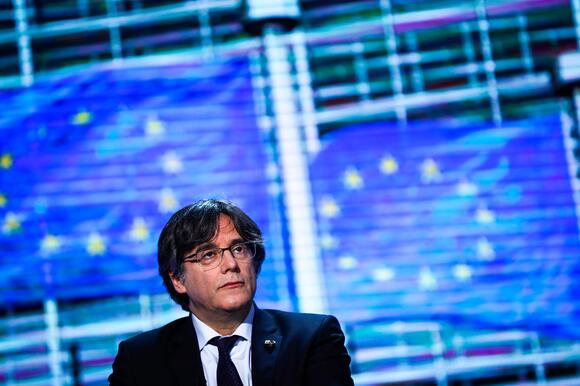 A former Catalan leader sought by Spain for a failed 2017 secession bid is expected to appear at an extradition hearing Friday after being detained in Sardinia an Italian island with strong Catalan cultural roots and its own independence movement.

Italian police on Thursday night transferred Carles Puigdemont to a jail in Sassari, a Sardinian city near Alghero, where he had been detained upon arrival at the airport there. Alghero is hosting a traditional Catalan folklore festival that he was expected to attend.

His Spanish lawyer, Gonzalo Boye, said Thursday night that his client was being detained in Italy under a 2019 European arrest warrant, even though it has been suspended.

Earlier in the week, Sardinian media reported that Puigdemont had been invited to a closed-door gathering elsewhere on the island of sympathizers of a Sardinian independence movement. Sardinian separatist supporters holding flags and banners gathered outside the courthouse Friday to show solidarity as they waited for Puigdemont's arrival at the tribunal.

Puigdemont’s Italian lawyer told reporters outside the courthouse that the start time of the hearing would be established after he and the judge have more time to review paperwork, indicating it might even be held over until Saturday.

Any decision by the judge in Sassari in favor of extradition would ultimately have to be approved by the Italian justice minister in Rome.

Puigdemont and a number of his separatist colleagues fled to Belgium in October 2017, fearing arrest after holding an independence referendum for Catalonia that the Spanish courts and government said was illegal.

Nine Catalan separatists later received prison sentences for their role in the 2017 referendum ranging from nine to 13 years. They were pardoned in July, but Puigdemont, who fled, was not.

He holds a seat in the European Parliament, although that legislature stripped him of parliamentary immunity.

The Spanish government in a statement said Puigdemont's detention in Sardinia “obeys a legal process which is underway and which applies to any citizen of the European Union who must respond to his acts in court.” Spain said it would respect decisions taken by Italian authorities and its courts.

Spain ended European champions Italy's world record 37-match unbeaten run as Ferran Torres scored twice in a 2-1 win at the San Siro stadium in their Nations League semifinal on Wednesday. Spain will face the winners of Thursday's other semifinal between France and Belgium, in Sunday's decider. - Stream a...
SOCCER・14 DAYS AGO
The Ringer

The Women’s Champions League group stage kicked off this week, so Musa and Ryan discuss the two showpiece fixtures, which saw Barcelona put four past Arsenal and Chelsea share points with Wolfsburg in a six-goal thriller (08:46), and round up the other games. Then it’s on to Spain, who ended Italy’s run with a 2-1 Nations League semifinal win at San Siro (30:30). Quick note: There’s no Stadio on Monday next week, but Musa and Ryan will join Ian on Wrighty’s House, which will go up Tuesday.
SOCCER・13 DAYS AGO
Telegraph

Our expert backs the Azzurri to win as part of his betting tips for the Nations League semi-final between Italy and Spain on Wednesday. Italy face Spain at the San Siro in Milan on Wednesday when they will hope to repeat their Euro 2020 semi-final victory over the same rivals, this time in the last four of the Uefa Nations League.
PREMIER LEAGUE・14 DAYS AGO
chatsports.com

Barcelona prodigy Gavi will become the youngest player ever to appear in a senior Spain international after being picked to start Wednesday's UEFA Nations League clash with Italy. More to Follow...
SOCCER・14 DAYS AGO

Spain coach Luis Enrique was delighted with their 2-1 Nations League semifinal win in Italy. Ferran Torres hit a brace aided by Leonardo Bonucci's red card just before half-time, Lorenzo Pellegrini grabbed a late goal for Italy. “The key was perhaps that we are capable of playing the way we...
SOCCER・14 DAYS AGO
goal.com

Roberto Mancini's side can add another honour to their successful year, but must defeat Luis Enrique's visitors in a Euro 2020 last-four rematch. Italy will be out to book their place at a shot at a second piece of silverware this year when they meet Spain in the first semi-final clash of the 2021 UEFA Nations League Finals in Milan.
SOCCER・14 DAYS AGO
goal.com

Luis Enrique decided to give the Barcelona wonderkid the chance to shine in the Nations League semi-final fixture. Barcelona prodigy Gavi has become the youngest player ever to appear in a senior Spain international after being picked to start Wednesday's UEFA Nations League clash with Italy. The 17-year-old has been...
UEFA・14 DAYS AGO

Gavi has opened up on his Spain debut after earning rave reviews and making history in Wednesday’s 2-1 Nations League win over Italy. The 17-year-old is now Spain’s youngest ever player and admitted it was a surprise to see his name in Luis Enrique’s starting XI for the match. “I...
SOCCER・12 DAYS AGO
Sporting News

Spain got its revenge. Three months after losing a Euros 2021 semifinal to Italy in a penalty-kick shootout, La Roja got the better of defending European champion Italy in a UEFA Nations League semifinal, winning 2-1 in Milan’s Stadio San Siro. In the process Spain's victory also snapped Italy’s record...
SOCCER・14 DAYS AGO
The Independent

Germany s top security official plans to announce new measures Wednesday to clamp down on migrants illegally crossing into the country from Poland.Authorities in Germany say about 4,500 such crossings have been registered since August. Many of them are people from Syria and Iraq who flew to Belarus in the hope of reaching the European Union via Poland. German Interior Minister Horst Seehofer was due to lay out his plans at a regular Cabinet meeting Wednesday before announcing them at a news conference in Berlin An Interior Minister spokesman, Steve Alter, said Tuesday that Germany has offered assistance to Poland by seconding additional border guards and providing logistical support for housing migrants in the country.While Germany and other EU countries have backed Poland's efforts to protect its border with Belarus, Berlin has also raised concerns about the humanitarian situation of migrants picked up at the border.___Follow AP’s global migration coverage at https://apnews.com/hub/migration
IMMIGRATION・15 HOURS AGO
Newsweek

President Alexander Lukashenko claimed victory for a sixth presidential term, but the election was marred by claims of widespread voter fraud.
POLITICS・2 DAYS AGO

Romans have elected a centre-left former economy minister as their next mayor, rejecting by a large margin a right-wing contender dogged by accusations of anti-Semitism, near final results showed Monday. Michetti's campaign was derailed last week when he was forced to deny accusations of anti-Semitism over an article he wrote last year that was unearthed by a left-wing newspaper.
ELECTIONS・2 DAYS AGO
Variety

‘Mediterraneo: The Law of the Sea’: A Dramatic Picture of Southern Europe’s Refugee Crisis

“Why don’t you come around for dinner?,” Barcelona lifeguard Gerard Casals (Dani Rovira) asks his boss, Oscar Camps (Eduard Fernández), at the beginning of “Mediterráneo: The Law of the Sea.” “I’ve got other plans,” says Camps. Cut to his sitting on his sofa, eating a warmed-up microwave dinner watching TV on his laptop. Then Camps catches a news report featuring the horrific images of 3-year-old Syrian toddler Alan Kurdi, his lifeless body lying on a Turkish beach, washed by waves, after the dingy he was in capsized. Two days later, Oscar and Gerard are sitting on a beach in Lesbos, Greece, looking across...
SOCIETY・19 HOURS AGO
AFP

A decade after Basque separatist group ETA renounced the use of arms, the northern Spanish region is still trying to turn the page on decades of bloodshed. Its decision to lay down its arms was a "major turning point" for the Basque separatist movement, said political scientist Rafael Leonisio Calvo, the author of a book about ETA. "It was a surprise, particularly since it was a unilateral announcement without any trade-offs...but in reality it was the result of a long process," he told AFP. - Weakened by arrests - Several weeks before the announcement, secret negotiations were held between ETA leaders and the Spanish government via intermediaries.
EUROPE・1 DAY AGO
The Independent

The Polish prime minister has accused the European Union of “blackmail” in the face of an ongoing legal dispute, further escalating tensions between Poland and the rest of the bloc. Speaking in the EU assembly on Tuesday, Mateusz Morawiecki, of the ruling Law and Justice Party (PiS), claimed his country...
POLITICS・1 DAY AGO
AFP

Polish Prime Minister Mateusz Morawiecki on Monday warned fellow EU leaders that the European Union risked unravelling if there was no "democratic control" over its institutions. Writing to EU leaders ahead of a summit this week, Morawiecki wrote that the EU risked becoming a "centrally managed organism run by institutions deprived of democratic control".
POLITICS・2 DAYS AGO
Taylor Daily Press

La Squadra Azzurra vs La Roja, talk about a nice warm-up for Belgium and France. Day in and day out, three months after penalty shootouts at Wembley, European champions Italy faced the toughest customer they faced on their way to winning the European Championship in Milan tonight. And whether Roberto...
SOCCER・13 DAYS AGO
wtvbam.com

TUNIS (Reuters) – Thousands of Tunisians opposing President Kais Saied’s seizure of almost total power protested in the capital on Sunday as a very heavy police presence tried to stop them advancing along the central Habib Bourguiba Avenue. A week after thousands demonstrated in support of Saied, the growing number...
PROTESTS・10 DAYS AGO