By Josh Siegel
WashingtonExaminer
30 days ago 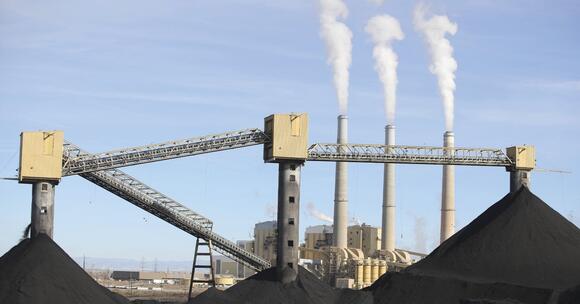 Some Republican-led states such as Indiana, Missouri, and Kansas have passed state-level laws this year to make it easier for owners of coal plants to restructure their debt.

The process, known as coal debt securitization, is like refinancing a mortgage, and it's being embraced by utilities to help them avoid rate increases on customers as they look to transition off coal for economic and environmental reasons. With approval from state regulators, utilities can arrange for the outstanding debt on coal plants to be sold as bonds that are then repaid by customers' monthly electricity payments.

The bonds, issued at low-interest rates, would cost customers much less than they would pay if the utility were still paying off the outstanding coal plant debt.

Now, House Democrats seek to expand these efforts as part of their $3.5 trillion reconciliation social and climate spending package by including provisions that essentially act as a federal version of coal debt securitization. "We have had a lot of focus on reducing the cost of deploying clean energy," said Ben Serrurier, the manager of carbon-free electricity at RMI, an environmental group. "We need to keep doing that. But we are recognizing the need to support communities through this transition and deal with the fact we have long-lived undepreciated fossil fuel assets that are uneconomic, and we're not actually removing those. We need to get creative with financing mechanisms."

Coal-fired power plants are closing rapidly, primarily for economic reasons due to competition from cheaper natural gas and renewables. But many remaining coal plants, despite being unprofitable, are scheduled to be operational for decades as utilities prolong their life by installing environmental control technology to comply with pollution regulations.

That means the cost of retiring a gigawatt of coal today is more than twice what it was in 2005, according to research by RMI. Today, 80% of coal generation in the United States has no retirement date or is scheduled to retire after 2030. The book value of these assets, which are concentrated in just a handful of states, totals $129 billion.

These investments, approved by utility regulators, will need to be repaid by their customers, on top of the cost of the additional investment needed for the transition to lower-carbon energy sources. "Independent of any policy, clean energy transitions are happening, and you have to deal with the issue of costs," said Ashok Gupta, a senior energy economist at the Natural Resources Defense Council. "If the new stuff wasn't less expensive than the old stuff, this financing tool wouldn't be a thing to go to. The main reason to do this is to help lower costs to consumers."

To meet their climate goals, Democrats would have to find a way to make it cheaper for utilities to shut down uneconomic coal plants faster without imposing pain on consumers, who would bear higher costs if utilities can't recover their investments.

Achieving such a goal would mean there is hardly, if any, coal left in the electricity system. "In the big picture, the CEPP is trying to create a structure for utilities to transition and to move it along — to get utilities from walk to run," Serrurier said. "But it may be hard for you to run because you have a heavyweight [long-term debt] on your ankles. If we can lower the cost of shedding uneconomic plants, it gives ratepayers and the utility more room to move faster and maneuver toward the transition."

House Democrats seek to achieve this through two primary avenues.

That office is currently used to help commercialize new clean energy technologies. Democrats would also authorize it to take on another role of providing financial support to help utilities retire fossil fuel infrastructure.

The Agriculture Committee's section of the reconciliation bill provides $9.7 billion to help electric co-ops pay off debt on coal plants, many of which were funded through loans from the Department of Agriculture's Rural Utilities Service.

The shift to clean energy is happening more slowly at co-ops that service much of rural America since many are often locked into long-term contracts with coal plants. Gupta said co-ops are ineligible for using state-level coal debt securitization because state utility commissions do not regulate them. Serrurier and Gupta said programs like these should not be viewed as a "bailout" to make utilities whole from bad investments in coal plants. "Utilities will say they got approvals to make these investments so they feel they should have an opportunity to recover those costs," Gupta said. "How do we make the transition happen a little faster and smoother at a lower cost to consumers?"

A business group representing wholesalers told President Joe Biden that jobs will be lost if he follows through with requiring companies with federal contracts to have their employees vaccinated.
U.S. POLITICS・1 DAY AGO
WashingtonExaminer

Climate summit will be powered by cooking oil

Some of the fleet of electric vehicles that will be used by foreign dignitaries during the United Nations COP26 climate conference this month may be charged using cooking oil-powered generators due to a lack of sufficient EV charging station capacity.
ENVIRONMENT・1 DAY AGO
WashingtonExaminer

Subscribe today to the Washington Examiner magazine and get Washington Briefing: politics and policy stories that will keep you up to date with what's going on in Washington. SUBSCRIBE NOW: Just $1.00 an issue!
ENERGY INDUSTRY・1 DAY AGO
The Independent

Saudi Arabia’s energy minister has laid out the Kingdom’s sustainable power targets at the Saudi Green Initiative conference. Prince Abdulaziz bin Salman took to the stage in the capital city of Riyadh to announce a target of net-zero carbon emissions by 2060. He also emphasised a focus on harnessing the...
ENERGY INDUSTRY・7 HOURS AGO

The transition away from fossil fuels is being mismanaged, creating chaos and energy poverty.
SAN RAFAEL, CA・1 DAY AGO
WXYZ Detroit - 7 Action News

A Michigan State University study has concluded that community solar expansion in Michigan would contribute nearly $1.5 billion to the state’s economy over 30 years. Researchers say the installation and ongoing maintenance of community solar projects would create 18,500 well-paying jobs, according to the East Lansing school.
MICHIGAN STATE・8 MINUTES AGO
KTVZ News Channel 21

A Measured Approach to Clean Energy

Today at the New Jersey Business & Industry Association’s (NJBIA) daylong Energy and Decarbonation conference, experts in the energy field as well as key policy and business leaders had an open and honest discussion about ways to help shape the business community’s policy response to the clean energy debate. The...
ENERGY INDUSTRY・1 DAY AGO

Some big investors are backing nuclear energy, a potential savior to the energy crisis that’s gripping the world

Much-maligned nuclear energy is getting a second look as a reliable, carbon-free source of energy that's cheap and scalable.
ENERGY INDUSTRY・1 DAY AGO
WLNS

The U.S Energy Information Administration reports that with higher energy prices, and a colder seasonal forecast, households could see heating bills jump as much as 54% from last winter.
CONGRESS & COURTS・1 DAY AGO
Georgia Recorder

The coal sector has been in decline in West Virginia for decades, but it's a powerful force in the state's identity and politics.
ENERGY INDUSTRY・2 DAYS AGO

The rule is based on recommendations that were made, but never acted upon, a decade ago by experts and federal regulators after a 2011 storm caused widespread rolling outages.
TEXAS STATE・2 DAYS AGO
WashingtonExaminer

The remaining provisions in Democrats’ reconciliation bill won’t enable President Joe Biden to meet his goal of cutting U.S. emissions in half by 2030, as evidenced by new research highlighted below.
ENERGY INDUSTRY・2 DAYS AGO
martechseries.com

New Study from The Brattle Group and Oracle Shows Utility Customer Action Can Be Twice as Impactful as Current Clean Energy Supply Policies in Reducing Greenhouse Gas Emissions. In the race to meet aggressive decarbonization and net-zero carbon goals and regulations, a new study shows that utilities cannot afford to...
ENERGY INDUSTRY・2 DAYS AGO
Inside Indiana Business

MERRILLVILLE - Northern Indiana Public Service Company LLC says it has “refined” its plan to retire two coal fired plants and invest in solar and wind farms. The subsidiary of Merrillville-based of NiSource Inc. (NYSE: NI) says it is now expecting to shut down the Michigan City Generating Station between 2026 and 2028. An earlier version of the 2021 Integrated Resource Plan said the retirement would occur in 2028.
MERRILLVILLE, IN・2 DAYS AGO
The Independent

Plastic will create more pollution in US than coal by 2030, study says

By the end of the decade, the contribution of the United States’ plastics industry to climate change will exceed that of coal-fired power, says a study.A report from Bennington College’s Beyond Plastics think tank says that the US plastics industry is currently responsible for at least 232 million tons of CO2e gas emissions per year – the equivalent to those of 116 average-sized coal-fired power plants.The Huffington Post reports that while roughly 65% of the country’s coal-fired plants closed over the past decade, the US plastics industry has grown at such a rate, it threatens to offset any benefits...
ENVIRONMENT・2 DAYS AGO
The Independent

Japan adopted a new energy policy on Friday that promotes nuclear and renewables as sources of clean energy to achieve the country’s pledge of reaching carbon neutrality in 2050.The new basic energy plan, adopted by the Cabinet just in time for the climate summit in early November, calls for drastically increasing use of renewable energy to cut fossil fuel consumption over the next decade as Japan pushes to meet its ambitious emissions reduction target.Japan has been undecided over what to do about its nuclear power industry since the 2011 Fukushima plant disaster. It now says reactor restarts are key...
ENERGY INDUSTRY・2 DAYS AGO
Bay News 9

Nuclear power, like that at Georgia's Plant Vogtle, is necessary for Biden’s energy goals

Charlotte Whelan is a policy analyst at the Independent Women’s Forum and a member of the Steamboat Institute’s Emerging Leaders Council. She wrote this for InsideSources.com. President Joe Biden has made climate activism a central component of his presidential platform since day one on the campaign trail. But his approach...
GEORGIA STATE・3 DAYS AGO