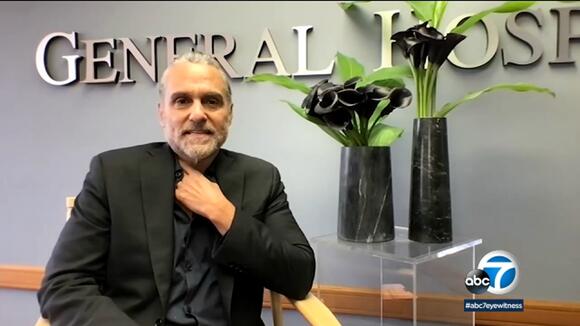 Maurice Benard is one of the most popular actors in daytime television. He's played mob boss Sonny Corinthos on "General Hospital" for almost 30 years. Until recently, Sonny had been missing. But now that he's back, look out! Sonny reunited with his love, Carly, after he had an accident, nearly drowned, got amnesia, disappeared for nine months and was presumed dead. There is also the issue at hand that she had to marry Sonny's right hand, Jason, you know, for mob reasons. But other than that, things are getting back to normal in Port Charles. Or are they? Benard says to expect some stressful viewing. "I was stressed so you're going to be stressed," he said. Benard is excited about what's ahead. "In this particular storyline, I do have an excitement level that I haven't had in a long time," he added. "Sonny's dark. And for me, being mentally ill, it can wear on you after 28 years. But it's what the audience digs and I have to go there." Over the years, Benard has been very open about being bipolar, once calling himself the "poster child for mental illness." There was a moment in the beginning where he almost walked away from his "General Hospital" role. "You know, my first three weeks here, I had a nervous breakdown and I quit and I wasn't going to come back," he said. "I wasn't going to act anymore and I did. And thank God I did because... this has been the greatest acting role... I've done." Benard is hoping to shoot a movie sometime this fall with Harvey Keitel called "The Legitimate Wiseguy." He'll once again be playing a mobster. "General Hospital" airs weekdays at 2 p.m. on ABC7.

Love Sonny. He has been awesome for years!!!!! Beat wishes in anything he’s a part of. Just saying I love my Sonny and Carly ❤️❤️❤️

Please don’t leave General Hospital. I’ll leave if you do. Sonny is totally awesome and I love him. Hopefully you can do both jobs.

Sonny is the back bone of the show. I understand that playing the same thing with the same person could get old. But we the people just adore you an Carly. We are all getting older with you, are retirement age an put a lot of attention on you an your show. Helps us in our boring life’s. Please just try to stay for us fans we need you that hour of our day. So appreciate what you do every day for our entertainment. Sending love an hugs from Massachusetts!!!!

Is Lulu coming back to General Hospital as Emme Rylan lands in LA?

Fans of General Hospital are wondering whether Emme Rylan, who plays Lulu Spencer, is returning to the show after she was spotted in Los Angeles. After being on General Hospital from 2013 to 2020, the character of Lulu Spencer was put into a coma, which gave Emme the actress a chance to travel the world with her family.
TV & VIDEOS・18 DAYS AGO
soapsindepth.com

Rejection is the name of the game in these GENERAL HOSPITAL spoilers! Jason wants nothing to do with Austin, Britt sees right through Brook Lynn’s story, Carly wants to ruin the woman who stole her husband, and Sonny makes a few demands of Nina regarding how they can co-exist in Port Charles!
TV & VIDEOS・13 DAYS AGO
thefocus.news

Is Jeff Webber really coming back to General Hospital?

General Hospital is dropping hints that Jeff Webber may really be coming back, fans are keeping their fingers crossed that the rumours are true. It looks like Hayden could make her way back home to Port Charles and General Hospital spoilers suggest that her father may follow in her footsteps.
TV & VIDEOS・5 DAYS AGO
TVShowsAce

‘General Hospital’ Weekly Spoilers: Will Carly and Sonny Ever Be the Same Again?

General Hospital spoilers for October 11-15, 2021, reveal Carly and Sonny Corinthos having a harder time getting their old lives back than they expected. Way too much seemed to happen to both of them during the nine months Sonny was away. General Hospital Spoilers: No Fresh Start For Carson?. Sonny...
TV SERIES・16 DAYS AGO

Daytime drama’s real-life power couple have officially tied the knot. The Young and the Restless’s (Y&R) Courtney Hope and General Hospital (GH) star Chad Duell got married on Saturday, October 23rd in Malibu. In an eye-popping and gothic affair, Hope, 32, and Duell, 34, painted the town red with matching...
RELATIONSHIPS・1 DAY AGO
thefocus.news

Who is Marshall on General Hospital and is he Curtis’ father?

In the latest episodes of General Hospital, someone has been stalking Curtis Ashford aka Donnell Turner. That man appears to be Marshall who is played by Robert Gossett. He has been cast as the mystery man that showed up on the October 18th episode. Let’s discover who the stalker is...
NFL・5 DAYS AGO
TVShowsAce

General Hospital spoilers for the next few episodes tease some intense moments involving Ava Jerome and Nikolas Cassadine. Not only will Nik continue to fight for Ava, but viewers will also see a different side of him, quite literally. General Hospital Viewers Will See A Temporary Recast. According to the...
TV SERIES・28 DAYS AGO
soapsindepth.com

What Happened to Kevin on GENERAL HOSPITAL

Kevin Collins has been on GENERAL HOSPITAL for decades as well as its spinoff, so he has quite a lot of history newer viewers might not be aware of. The character was introduced back in 1993, played by actor Jon Lindstrom. From 1997-2003, Kevin was a main character on PORT CHARLES, and in 2004 he made a cameo appearance at Lila Quartermaine’s funeral. Lindstrom returned to GH in 2013 on a recurring basis, although when he was unavailable to film in 2015, the role was briefly recast with Anthony Starke. But despite his life being threatened more than once, Kevin takes a licking and keeps on ticking!
TV SERIES・8 DAYS AGO

General Hospital spoilers for October 18-22, 2021, reveal the gang in Crete searching for Drew Cain. They know he’s alive, they know who has him, and they also know they need to find Valentin Cassadine and Liesl Obrecht fast. General Hospital Spoilers: Will Soldier Boy Be Found?. At least Drew...
TV SERIES・9 DAYS AGO
Hello Magazine

NCIS star Michael Weatherly has sparked a huge reaction from fans with his latest post. Taking to Twitter this week, the 53-year-old actor shared a throwback photo of himself and co-star Cote de Pablo from the set of the naval drama - and fans were all saying the same thing in the replies!
CELEBRITIES・21 DAYS AGO
People

The Young and the Restless Star Courtney Hope and General Hospital's Chad Duell Are Married: 'Till Death'

Courtney Hope and Chad Duell have tied the knot. The soap stars got married on Saturday in a gorgeous 'Till Death'-themed outdoor wedding in Malibu. The Young and the Restless actress and the General Hospital actor stunned in matching red wedding ensembles, while their guests complimented the gothic mood wearing all-black.
RELATIONSHIPS・2 DAYS AGO
thesfnews.com

HOLLYWOOD—I honestly don’t know where to begin because to be honest “General Hospital” has been striking on all cylinders right now as one of the best soap operas on TV right now. I mean we’re seeing storylines develop, surprises revealed and drama that makes you want to tune in each week. So let’s start with one that surprised me with the revelation, but NOW that I look back on it, it makes perfect sense now. I mean Valentin Cassadine, is actually a Cassadine! We knew Helena was his mother, but we were left wondering who was dear ole dad? It was revealed that Victor slept with Helena, and it explains why Helena hated Valentin so much, and coined him the spawn of the Devil.
TV SERIES・10 DAYS AGO

'Bold and the Beautiful' Alum Marks Return to Daytime Soap

After a multi-year absence, actor Sean Kanan made his grand return to The Bold and the Beautiful this week. Kanan reprised his role as troublemaker Deacon Sharpe, the son of Daryl Sharpe and the father of Eric Sharpe and Hope Logan, during the Thursday, Oct. 7 all-new episode of the hit CBS soap opera. The episode marked Kanan's first appearance on the show since 2017.
TV SERIES・19 DAYS AGO
soapsindepth.com

She’s back! Scarlett Fernandez has returned to GENERAL HOSPITAL and Charlotte should be appearing very soon! “You have no idea how happy this made me!” the young actress shared on Instagram with a photo of herself standing outside the GH studio. “I love this place, I love the people, and I love being Charlotte. It’s been five years of playing her and I have loved every day!”
CELEBRITIES・18 DAYS AGO
digitalspy.com

The Conners spoilers follow. The Conners aired a lovely episode last night (October 13) in the US, as Louise Goldufski became part of the family by marrying Dan Conner. But it wasn't all plain sailing, as a tornado threatened to completely derail the day. Thankfully, Jackie Harris stepped in and pronounced them husband and wife.
CELEBRITIES・12 DAYS AGO
fame10.com

From Gas Station To Glamour, GH’s Laura Wright Reflects On Her Big Break

Few people would guess that Laura Wright, the soap opera veteran and mob queen of Port Charles, came into acting with zero experience or expectations. But as the General Hospital (GH) star recently explained to Soap Opera Digest, she nearly passed up on her whole career — because she had a date!
CELEBRITIES・5 DAYS AGO
soapsindepth.com

When actress Amber Tamblyn appeared on WATCH WHAT HAPPENS LIVE WITH ANDY COHEN to promote her role as Kimberly in the new FX on Hulu series Y: THE LAST MAN, naturally, the subject of GENERAL HOSPITAL came up! Longtime soap fans fondly remember Tamblyn’s run as young Emily Quartermaine and it turns out her memories of her time in Port Charles are just as fond!
CELEBRITIES・12 DAYS AGO
Newsweek

Why Is Osvaldo Benavides Leaving 'The Good Doctor'?

It was reported on Tuesday that Osvaldo Benavides will depart the ABC series despite only being made a regular in the latest season.
TV SERIES・15 HOURS AGO
Hello Magazine

Derry Girls' Jamie-Lee O'Donnell is set to star in Screw, Channel 4's big new ensemble drama set in a busy men's prison - and we can't wait to watch it!. The six-episode drama from Killing Eve writer Rob Williams will focus on Jamie's character Rose, a 21-year-old trainee officer who starts a job at Long Marsh Prison. Despite her street smarts, the prison might prove to be a challenge for her.
TV SERIES・12 DAYS AGO
TVShowsAce

The Y&R spoilers for the week of October 4, 2021, show that Victoria Newman (Amelia Heinle) switches her attitude. The couple travels to Tuscany, Italy, but she doesn’t look too certain about wanting to marry Ashland Locke (Richard Burgi). Then she’ll flip the script and want to get it done as soon as possible. Maybe it’s the romantic city that has her catching feelings all over again.
TV SERIES・21 DAYS AGO