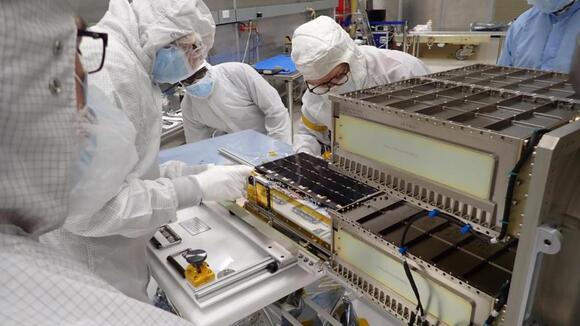 BOULDER, Colo. (CBS4) – CU Boulder is about to put a CUTE spin on space exploration. The CUTE Satellite, short for Colorado Ultraviolet Transit Experiment, is no bigger than a box of cereal but will spend 7 months exploring planets outside our solar system.

CUTE will launch on September 27th on the back of a United Launch Alliance Atlas V rocket from Vandenberg Space Force Base in Southern California. The satellite, according to principal mission investigator Kevin France, cost around $4 million and is only about as big as a “family-sized box of Cheerios.” 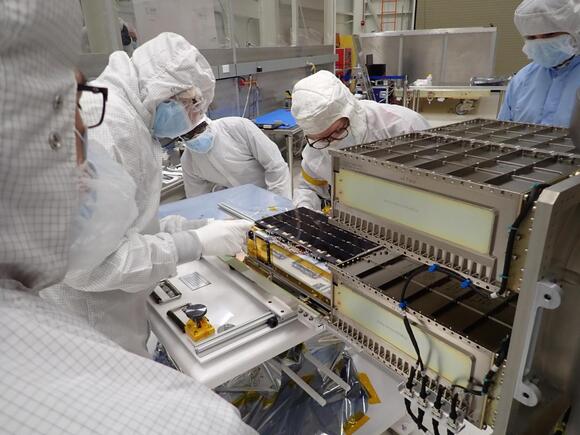 “It’s an experiment that NASA is conducting to see how much science can be done with a small satellite,” said France, a professor in the CU Department of Astrophysical and Planetary Sciences. “That’s exciting but also a little daunting.”

CUTE will then enter orbit around Earth, aiming sensors at a series of exoplanets called “hot Jupiters.” These planets are large hot gas giants. CUTE’s goal is to give scientists better understanding of how these planets form. 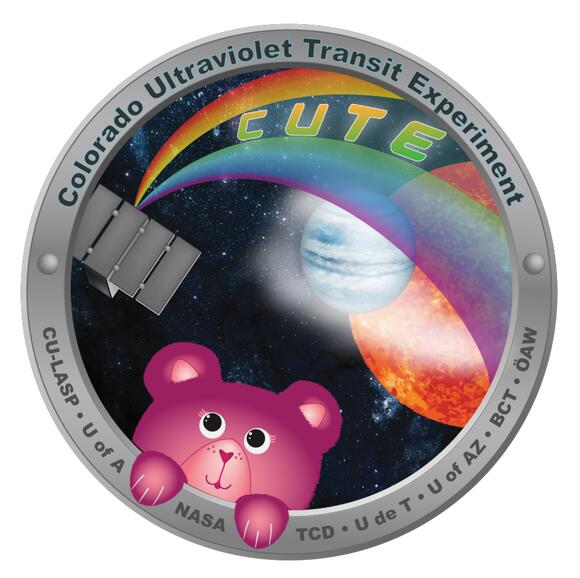 This is one in a series of missions spearheaded by the CU Laboratory for Atmospheric and Space Physics. LASP has developed many other CubeSat missions to explore a a gamut of things like solar activity to supernovae in far-off galaxies.

“Ultimately CUTE has one major purpose, and that is to study the inflated atmospheres of these really hot, pretty gassy exoplanets,” Arika Egan, a LASP graduate student who helped to develop the mission, said. “The inflation and escape these exoplanetary atmospheres undergo are on scales just not seen in our own solar system.” 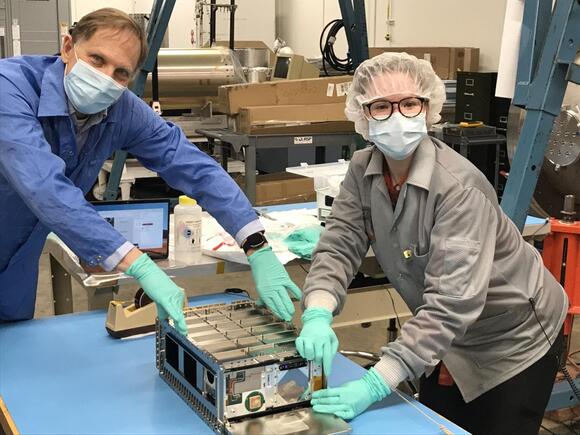 “When you look up at the sky and see thousands of stars, that is existential on its own,” she said. “But then you think about the planets we’ve discovered around those stars, thousands of planets. We’ve just barely scratched the surface of characterizing them, of understanding their diversity. How little we know is astounding, and joining the effort to learn more is fulfilling.”

We may be one step closer to understanding the unknown parts of our universe. Astronomers using NASA's Chandra X-ray Observatory telescope have detected what appears to be a planet in a galaxy beyond the Milky Way for the first time in history, NASA announced on Monday. The unnamed exoplanet —...
ASTRONOMY・14 HOURS AGO
The Independent

A Nasa telescope might have found the first ever planet outside of our own Milky Way galaxy.If confirmed, the world would be thousands of times further away than the many exoplanets we have found in our own galaxy so far.Scientists were able to do so using Nasa’s Chandra X-ray Observatory, using techniques that could allow for the search for other worlds to dramatically increase the amount of space it is able to scan.Until now, every exoplanet or possible exoplanet that has been found has been in our own Milky Way. That means almost all of them are less than...
ASTRONOMY・18 HOURS AGO
Outsider.com

A record-breaking temblor is in the process of being confirmed by scientists. If it is indeed confirmed, it would change the way geologists look at earthquakes. Most temblors take place within just a few dozen miles of the Earth’s surface. But six years ago, scientists were baffled when our planet was struck by quakes deep at its core. We aren’t talking about the normal few-dozen-mile range. We’re talking hundreds of miles inside Earth — depths where it was previously thought that due to the intense temperature and pressure, a normal earthquake wouldn’t be possible.
ENVIRONMENT・1 DAY AGO
USA TODAY

Astronomers for the first time have discovered signs of a planet outside our Milky Way galaxy, about 28 million light-years away.
ASTRONOMY・17 HOURS AGO

Astronomers may have discovered the first planet outside of our galaxy

Signs of a planet transiting a star outside of the Milky Way galaxy may have been detected for the first time. This intriguing result, using NASA's Chandra X-ray Observatory, opens up a new window to search for exoplanets at greater distances than ever before. The possible exoplanet candidate is located...
ASTRONOMY・1 DAY AGO
USA TODAY

With the help of a ruby, scientists prove ancient life existed over 2.5 billion years ago

A team of researchers studying rubies in Greenland discovered one of the oldest gems carried remnants of a living organism.
SCIENCE・8 HOURS AGO
Daily Camera

You can't see them from the surface, but they're definitely there. Scientists have revealed the discovery of hundreds of ancient ceremonial sites, many of which belonged to the Maya civilization, hiding in plain sight just underneath the landscape of modern-day southern Mexico. The largest of these structures – called Aguada Fénix – was announced by archaeologists last year, representing the oldest and biggest monument of the ancient Maya ever found. But Aguada Fénix clearly was not alone. In a new study, an international team of researchers led by anthropologist Takeshi Inomata from the University of Arizona reports the identification of almost 500...
SCIENCE・1 DAY AGO

In an Astonishing Feat, Astronomers Present Evidence of an Extra-Galactic Planet

In a galaxy 31 million light-years away, astronomers believe they have just found evidence of a planet. After a painstaking research effort combing through thousands of signals, a team led by Rosanne Di Stefano of the Harvard & Smithsonian Center for Astrophysics has determined that a huge dip in X-ray light from the Whirlpool Galaxy is best explained by an extragalactic planet. The researchers have dubbed this extroplanet M51-ULS-1b, and its discovery could change the way we look for planets outside the Solar System – in the Milky Way, and beyond. "We feel privileged to have been able to contribute this piece of...
ASTRONOMY・1 DAY AGO
Complex

Scientists Discover Possible Signs of First Planet Beyond Our Galaxy

Scientists have found signs of what could be the first-ever planet located outside of our galaxy, BBC News reports. The potential discovery was made by NASA’s Chandra X-Ray Telescope, which is used to observe transits, an instance in which a planet passes in front of a star, causing a considerable dimming in brightness. This technique was primarily used to detect exoplanets inside the Milky Way, but the team’s latest finding clearly represents a break from the norm.
ASTRONOMY・13 HOURS AGO
ScienceAlert

We've seen plenty of awe-inspiring images of space captured by telescopes and spacecraft in the past: whether it's a supernova blast wave, the textures of a planet, or pillars of interstellar gas and dust, there's a virtually endless stream of fascinating pictures available for us to pore over. Sometimes though there's something more hidden in the patterns of stars and light. Take a look at the image below, for example, and see if it suggests anything to you. It's an image captured by the NASA Spitzer Space Telescope, which was operational from 2003 to 2020. Getting anything yet? We'll give you a...
ASTRONOMY・1 HOUR AGO
WKRC

China may be launching satellite-destroying technology into space, experts say

WASHINGTON (TND) — The capability of China’s most recent “practice” satellite remains unknown, but experts say it could be dangerous for the U.S. and other Chinese adversaries. The China Aerospace Science and Technology Corp, a state-run space company, indicated the successful launch of Shijian-21 from Xichang Satellite Launch Center in...
AEROSPACE & DEFENSE・8 HOURS AGO

An international team of astronomers discovered one of the youngest planets to have ever been observed, a press statement from The University of Hawaii at Manoa reveals. The planet is so young that its surface is still searingly hot from the energy released during its formation. Discoveries such as this...
ASTRONOMY・1 DAY AGO
Vice

Jeff Bezos has turned his wealth from Amazon into a play for space. He's already gone to the edge of space in one of his own Blue Origin rockets and broken the record for sending the oldest person ever into space, twice. Now, Blue Origin has announced plans to build a commercial space station called Orbital Reef.
AEROSPACE & DEFENSE・1 DAY AGO
SlashGear

Our solar system may be surrounded by a magnetic tunnel

An astronomer from the Dunlap Institute named Doctor Jennifer West has a new theory that proposes our solar system could be surrounded by what she describes as a magnetic tunnel. The tunnel-like structure can be seen in radio waves. According to Doctor West, two bright structures seen on opposite sides of the sky that were previously believed to be separate are connected and made of rope-like filaments.
ASTRONOMY・1 DAY AGO
Newsweek

The red-hot distant world could be studied further by the James Webb Space Telescope to reveal more about its atmosphere.
ASTRONOMY・1 DAY AGO
CU Boulder News & Events

CU Boulder researchers attracted a record $634.4 million in fiscal year 2021 for studies that, among other things, examine how artificial intelligence can transform education, led to the United Arab Emirate’s Hope spacecraft orbiting Mars, and address threats posed by climate change in the Arctic. The university obtained grants from...
BOULDER, CO・1 DAY AGO
AFP

Jeff Bezos' Blue Origin on Monday announced it wants to launch a space station that will house up to 10 people in the second half of the decade, as the race to commercialize the cosmos heats up. "Orbital Reef," described in a press statement as a mixed-use business park in space that will support microgravity research and manufacturing, is a joint venture with commercial space company Sierra Space and has the support of Boeing and Arizona State University. "For over sixty years, NASA and other space agencies have developed orbital space flight and space habitation, setting us up for commercial business to take off in this decade," said Blue Origin executive Brent Sherwood. "We will expand access, lower the cost, and provide all the services and amenities needed to normalize space flight."
AEROSPACE & DEFENSE・1 DAY AGO
Space.com

A group of researchers wants to save Earth from a potential asteroid apocalypse using a new planetary defense method they call PI — short for "Pulverize It." The plan — detailed in a lengthy technical paper on the University of California, Santa Barbara (UCSB) Experimental Cosmology Group website and submitted to the journal Advances in Space Research — aims to smash large, potentially life-threatening asteroids into hundreds of tiny pieces by launching an array of "penetrator rods" into the asteroid's path.
ASTRONOMY・3 DAYS AGO
ScienceAlert

Just over 400 light-years away, a baby exoplanet is making its way into the Universe. This, in itself, is not so unusual. We've detected thousands of exoplanets – planets outside the Solar System. Presumably they all had to be newborn at some point too. What makes this exoplanet special is that astronomers obtained a direct image of it – an almost vanishingly rare feat. It's named 2M0437b, and it's one of the youngest exoplanets for which we have ever obtained a direct image. This could give us a new window into the planet formation process, which in turn could help us understand how the...
ASTRONOMY・2 DAYS AGO