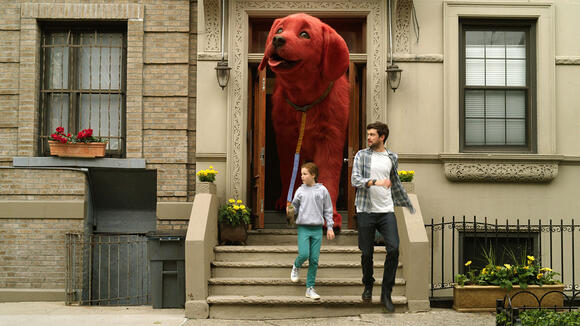 Clifford the Big Red Dog is back on track for release. Paramount has put the children’s film back on the calendar for Nov. 10 for a day-and-date release in theaters and on Paramount+. It currently has that weekend to itself in terms of movies opening nationwide.

Clifford the Big Red Dog adapts Norman Bridwell’s beloved children’s book series about a 25-foot-tall red dog and his young owner, Emily Elizabeth. The film stars Darby Camp as Emily Elizabeth, as well as Jack Whitehall, John Cleese and Tony Hale. Jay Scherick directs and has a screenplay credit along with David Ronn and Blaise Hemingway from a story by Justin Malen and Ellen Rapoport. A popular animated Clifford series has aired on PBS since 2000.

In July, Paramount pulled Clifford from a September release date amid concerns over the delta variant. A month ago, the studio screened the film in full for audiences at CinemaCon.

Earlier this month, there was a huge shift in power at Paramount when film chief Jim Gianopulos was shown the door and succeeded by Robbins.

Family movies that have braved opening in theaters during the pandemic have done solid business, including Paramount’s PAW Patrol: The Movie , which likewise debuted simultaneously on the big screen and on Paramount+.

Disaster movies used to be fun. Back in the ’70s, they were filled with aging movie stars, many very much in need of a commercial hit, doing things like flying crippled planes, desperately attempting to rescue earthquake victims, swimming underwater in an upside-down ocean liner, and jumping off burning buildings. Writer-director Lindsay Gossling’s 13 Minutes takes a different approach to the venerable genre. The film uses the familiar disaster movie template to concentrate on hot-button social issues, and boy, there are plenty of them. Before and after a monster tornado wreaks havoc on a small Oklahoma town, the characters grapple with...
MOVIES・1 DAY AGO
The Hollywood Reporter

It’s going to take a little longer for Elphaba and Glinda to be seen by the Wizard, and a little longer for audiences to see Wicked. Universal’s adaptation of one of the biggest musicals of all time was set to begin shooting in March in Atlanta. But the production’s start has now been pushed to June, and it will relocate to the U.K., multiple sources tell The Hollywood Reporter. The delay, insiders say, will allow the filmmakers to get production efficiencies in-line, as Wicked will be the first production to shoot on stages at Universal’s recently built Sky Studios in Elstree. The...
MOVIES・8 HOURS AGO
The Hollywood Reporter

Dr. Crane and Mrs. Hughes are joining forces. Frasier star Kelsey Grammer and Downton Abbey‘s Phyllis Logan are uniting for high concept thriller No Way Up, being introduced to buyers at next week’s American Film Market by Altitude Film Entertainment. Described by the filmmakers as a “rollercoaster combination of disaster movie and survival thriller,” No Way Up follows two characters from very different backgrounds that are thrown together when the plane they are traveling on crashes into the Pacific Ocean. The stricken airliner comes to rest perilously close to the edge of a bottomless ravine with the surviving passengers and crew trapped...
MOVIES・13 HOURS AGO
/Film

If it feels like we've been hearing about the live-action "Clifford the Big Red Dog" movie for close to an eternity, well, that's because we have to go all the way back to the downright quaint year of 2016 to track down when the project was first announced. During this ongoing pandemic, the film's release date has been delayed a number of times. First scheduled to release in November of 2020, "Clifford" was further pushed back from its tentative September 17 date before finally appearing on track for its upcoming wide release next month. With all systems go, Paramount has released the final trailer that shows off all sorts of giant dog mayhem that — even after so much marketing — somehow doesn't feel any less existentially unnerving in live-action. Check it out below ... at your own risk!
PETS・13 DAYS AGO

Clifford the Big Red Dog, created by Norman Bridwell, has been a staple of children’s literature for nearly 60 years, and he’s also been well-represented in animated TV shows and even a theatrical movie. Next month, though, will mark the character’s live-action debut, and following the trailer released in June, a new preview for Paramount's’ Clifford the Big Red Dog movie is now here. It shows off the heartwarming mayhem of the title character, along with a sprinkling of the trouble he’ll run into.
PETS・13 DAYS AGO
theplaylist.net

The story of “Clifford The Big Red Dog,” the live-action CGI adaptation of the children’s books, goes a little bit like this. A meme was created with a still from the movie of the gigantic red Clifford dog walking with and towering above a big boy on the street, saying, “This looks like a commercial for anxiety medication.” And I have not been able to get that out of my head ever since. I assume the movie is kind of about that now and about a fictional dog, a boy’s imagination, and a soothing and or terrifying dog that makes everything either much worse or much better; take your pick.
MOVIES・13 DAYS AGO
Variety

Ryan Gosling and director Derek Cianfrance will reunite on “Wolfman,” the latest monster movie from Universal Pictures. Gosling and Cianfrance previously teamed on the Oscar-nominated romantic drama “Blue Valentine” and acclaimed thriller “The Place Beyond the Pines.” Cianfrance is taking over directing duties from Leigh Whannell (“The Invisible Man”), who had to drop out of the project due to a scheduling conflict. Cianfrance will also write the script. It is not clear what the new version of “Wolfman” will look like, but the movie is expected to be a modern take on the story about a man who is bitten and transforms...
MOVIES・1 DAY AGO
WRIC TV

‘Dune’ to get sequel, with theater-only release set for 2023

Legendary Entertainment announced Tuesday that Denis Villeneuve’s “Dune,” which adapts the first half of Frank Herbert’s 1965 science-fiction epic, will get a sequel. Whether that would be the case had been an unanswered question throughout the film’s release, which was delayed a year by the pandemic and ultimately debuted both in theaters and on HBO Max.
MOVIES・1 DAY AGO

If you didn’t love Clifford The Big Red Dog enough already, you’re about to be charmed even more by the massive pup. Ahead of the live-action movie’s premiere on Nov. 10, Romper has an exclusive peek at the new Clifford The Big Red Dog flick and its awesome talent talking about what it’s like to work with the lovable, giant pooch.
MOVIES・13 DAYS AGO
lrmonline.com

I don’t know too many people that have not heard of Clifford the Big Red Dog. The reason being is that a lot of us remember growing up with the books from Scholastic (he is also their mascot). It was such a flex to sometimes get lucky enough to have your parents order you books from the classic order form, which sometimes included Clifford.
ANIMALS・6 DAYS AGO
ComicBook

While giant monster fans are waiting to see what the future holds for the current king of the monsters, Godzilla, but this fall will see the arrival of another large beast in Clifford The Big Red Dog from Paramount Pictures, with the crimson canine recently sharing his Halloween costume that pays homage to the lizard king. While there has never been an official crossover between Clifford and Godzilla, it's clear that the two giant creatures have entered one another's worlds in a few different ways, both officially and with a number of fan creations.
COMICS・1 DAY AGO
KREX

Despite hybrid release, ‘Dune’ draws well on the big screen

NEW YORK (AP) — Denis Villeneuve’s “Dune” debuted with $40.1 million in ticket sales in its opening weekend in North America, drawing a large number of moviegoers to see the thundering sci-fi epic on the big screen despite it also being available to stream in homes. Warner Bros. launched the Legendary Entertainment production simultaneously in theaters and […]
MOVIES・2 DAYS AGO

Everything Coming to Paramount+ in November 2021

November is almost here and Paramount+ has announced all the titles coming to their service next month. Highlights include the season 4 premiere of Star Trek: Discovery, Clifford the Big Red Dog, and Mayor of Kingstown which stars Jeremy Renner. What are you excited to watch?. Available November 1. Abandon.
TV SERIES・1 DAY AGO
sevendaysvt

Anya Taylor-Joy on the Greatest Part About Being Cast in Super Mario Bros. Film (Exclusive)

Anya Taylor-Joy has found an unexpected perk of her upcoming role. ET's Matt Cohen spoke to the 25-year-old actress at the Los Angeles premiere of Last Night in Soho on Monday, and she revealed the best part of getting to voice Princess Peach in the upcoming Super Mario Bros. animated film.
LOS ANGELES, CA・1 DAY AGO
Variety

Paramount Players has optioned eight novels from author Gregg Hurwitz’s “Marked Man” series of books, with plans to adapt them for a series of feature films. The division of the ViacomCBS-owned studio, run by Jeremy Kramer, is eyeing lower budgets for the contemporary noir thrillers and specifically looking for diverse and perhaps first-time writers and directors to create the world. Hurwitz is the bestselling author of “Orphan X” and will produce the films alongside Emmy winner Scott Frank, producer of Netflix’s “The Queen’s Gambit.” The latter brought the books to the studio.  While not connected by a central character, Hurwitz’s novels are...
MOVIES・1 DAY AGO

Chris Evans is going to infinity and beyond as Buzz Lightyear in the first teaser trailer for the new stand-alone Toy Story movie. Lightyear serves as the origin story for the beloved lead character in one of Pixar’s most popular franchises. Announced late last year, the animated sci-fi action-adventure will give longtime fans of the aeronautical toy hero, originally voiced by Tim Allen, a look at how a young test pilot became the space ranger he’s known as today. The minute-and-a-half first look at the new movie begins with Buzz in a countdown before he’s launched into space, where he lands at...
MOVIES・6 HOURS AGO
Variety

Peacock announced that the new docuseries “Paris in Love” will begin streaming Nov. 11, with new episodes dropping every following Thursday. The 13-part wedding series will follow Hilton as she discovers the road to the altar has a few unexpected turns along the way as she prepares to marry successful venture capitalist Carter Reum. In the midst of planning for the wedding, fans will watch as Hilton navigates adulthood, a demanding work schedule and plans for her future. Hilton’s mother Kathy Hilton and sister Rothschild Hilton will support her through it all, from her engagement part to bridal dress shopping to...
TV SERIES・1 DAY AGO
Variety

Josh Lucas will battle a giant shark in “The Black Demon,” a survival thriller from “Rambo: Last Blood” director Adrian Grunberg. The film was written by Boise Esquerra (“Blackwater”) and is set to start principal photography in December on location in the Dominican Republic. Here’s the logline for this sea creature chiller: “The film follows oilman Paul Sturges (Lucas) as he takes his family on vacation to Bahia Azul. There, the coastal town he and his wife once knew has mysteriously crumbled and the locals are nowhere to be found. Paul starts off his day with a routine visit to inspect...
MOVIES・1 HOUR AGO
The Hollywood Reporter

It has been two years since a new season of South Park arrived due to the pandemic, but fans can rest easy as the Comedy Central staple is returning in early 2022. And before 2021 is up, two new South Park made-for-TV films will drop separately on Paramount+. On the heels of signing a $900 million mega-deal with ViacomCBS, creators Trey Parker and Matt Stone caught up with The Hollywood Reporter to talk about the future of their iconic cartoon, the trials and tribulations of remote producing among the ongoing pandemic, and their exuberance over a classic character’s return to form...
TV & VIDEOS・2 HOURS AGO