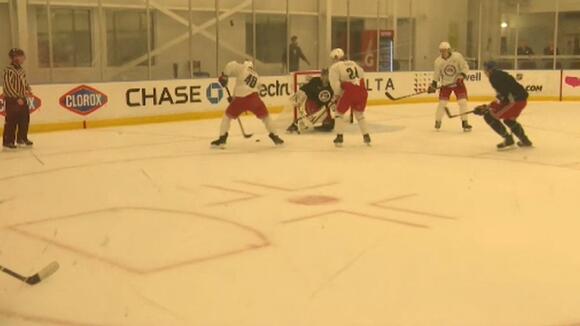 The Blueshirts are thinking playoffs with hopes younger talent will show growth and gain experience - bolstered by offseason moves to bring in physical players.

“We have to make the playoffs,” said forward Mika Zibanejad. “I feel like we have the team to do it, and I think that's something we're all aiming at and that's our goal.

Gallant added to Zibanejad’s statement. The Rangers’ new bench boss brings a championship pedigree, having coached the expansion Vegas Golden Knights to a Stanley Cup Final appearance back in 2018.

“We're like any other team,” Gallant said. “We expect to make the playoffs. That's what our goal is. But you just don't say it. Talk is cheap. You’ve got to get ready to work hard, play hard and get ready for every day.”

Alexis LaFreniere, who’s entering his sophomore season, is excited for this new chapter. The Rangers are looking for him to have a big impact.

“Get to meet a couple of new guys and get to see the guys from last year,” he said. “So, it's a lot of fun and a lot of new faces, so I'm trying to learn as much as I can and get ready for a big year.”

No one might be under more spotlight to perform than Chris Kreider. The veteran forward had a huge season last year, and he feels things will fall into place for the rest of the team as camp progresses.

“The best way to get in game shape is to play games,” Kreider said. “So, it was very up-tempo. Guys were working hard and obviously the execution will come and everyone will settle down as the camp gets going and become more comfortable with each other. But I think it's the best way to find your legs and get into game shape.”

The Rangers announced Thursday they'll honor the late Rod Gilbert at their home opener on Oct. 14. It will mark the 42nd anniversary of Gilbert's No. 7 being retired.

A GoFundMe page has been set up for the family of a 20-year-old Haverstraw woman who was killed in a car crash. Julissa Puente died in a multi-car crash on Route 9W last Friday. Puente was on her way to work when the incident occurred. She was attending Dominican College...
HAVERSTRAW, NY・23 HOURS AGO
News 12

A Bronx woman faces up to 15 years in prison for a string of burglaries targeting grieving Westchester residents. Dubbed the "Funeral Burglar," 30-year-old Latonia Stewart was found guilty of six Westchester burglaries. Prosecutors say she used obituaries to pick out homes to target and stole over $40,000 in jewelry...
BRONX, NY・1 DAY AGO
News 12

A Bedford park woman says she and her kids are living in constant fear after a family member was shot during a break-in at their home. Tashawnya Richardson says on June 27, her brother was visiting her when someone broke into the home. She says her brother came face-to-face with the intruder and moments later, she found him lying on the floor in his own blood.
PUBLIC SAFETY・23 HOURS AGO
Blueshirt Banter

After back to back games this weekend, the New York Rangers announced their latest round of preseason cuts this afternoon. Will Cuylle went back to the Windsor Spitfires of the OHL after turning some heads during both the developmental and training camps. Meanwhile; Lauri Pajuniemi, Matthew Robertson, Braden Schneider, Tyler Wall, and Adam Huska were all assigned to the Hartford Wolf Pack and will open the season in the AHL. There are now 27 players on the Rangers’ preseason roster with just a few decisions left to be made by Gerard Gallant and the rest of the coaching staff. Chief among those decisions is the intriguing competition for the 3rd right defense spot between Nils Lundkvist and Zac Jones. Presumably whoever misses out on that spot will be starting the season as the top defenseman for the Wolf Pack once they begin their regular season.
NHL・13 DAYS AGO

Alexis Lafrenière, with a flash of the stick and a flick of the wrist evened the New York Rangers preseason record at 2-2. The happy go lucky young star also sent his team into a long bonding trip to Rhode Island smiling from ear-to-ear. “We played the right way tonight,”...
NHL・13 DAYS AGO
Pocono Record

NY Rangers training camp: Alexis Lafrenière braces for life on the road and a bigger role

SOUTH KINGSTOWN, R.I. - The New York Rangers' team bonding trip through New England promises to be the first of many for Alexis Lafrenière this season. His rookie season featured 28 road games, but COVID-19 protocols limited them to the same seven Northeast cities. A couple of those cities didn't require overnight stays — and even in the ones that did, the team was restricted with what they could do and where they could go.
NHL・11 DAYS AGO
chatsports.com

We’ve made it to the final game of the preseason, and tonight will serve as a final tune up before the New York Rangers head to Washington, DC to square off with the Capitals. The Rangers and Islanders will faceoff in Bridgeport, CT, and the Rangers will look to put out a better performance than their prior contest vs. the Isles which ended in a 4-0 shutout loss.
NHL・7 DAYS AGO
chatsports.com

Sign up here to get Inside the Rangers delivered to your inbox each Tuesday morning. What happens in preseason often stays in preseason. But sometimes not. Before moving onto and into the 2021-22 season that commences Wednesday night in Washington, let us take a quick look back at this first Rangers training camp under head coach Gerard Gallant and his staff.
NHL・4 DAYS AGO
chatsports.com

Dallas Stars- 0-0-0 Venue: Madison Square Garden. The New York Rangers play their second game of the season on Thursday night when the team celebrates their home opening game against the Dallas Stars on Thursday night. The Blueshirt are coming off a 5-1 loss to the Washington Capitals in a...
NHL・2 DAYS AGO
Blueshirt Banter

When the New York Rangers and Washington Capitals last met for New York’s home finale last season, tensions were through the roof. Tom Wilson had run amok the previous game, injuring Artemiy Panarin and knocking him out for the remainder of the season. A line brawl kicked off the festivities immediately after the opening faceoff, and three more happened within the first five minutes of game action.
NHL・3 DAYS AGO
Yardbarker

Welcome to New York Rangers Weekly! Among the trending topics we will look at are the new additions to the roster that will debut and the alternate captains that were named earlier this week. It is opening week in the NHL, and the Rangers have four games on tap during the first week of their 2021-22 schedule. The Rangers finished 4-2 during the exhibition portion of their season and will look to begin the regular season on a positive note. The first week of the schedule includes a road game versus the Washington Capitals, followed by the home opener against the Dallas Stars, and two more away games against the Montreal Canadiens and Toronto Maple Leafs. Let’s look at some of the trends with the first week of the season upon us.
NHL・2 DAYS AGO

Henrik Lundqvist will have a front-row seat to view his former NHL team. The recently retired goaltender will join MSG
NHL・2 DAYS AGO
Sportsnaut

The NHL officially kicked off the 2021-2022 season this week and damn it’s good to have hockey back. The sounds of the stick slapping the ice and the puck hitting the glass, the insane saves from the goalies, the fights…and not just the ones on the ice. Obviously we’ve seen...
NHL・1 DAY AGO
Romesentinel.com

UTICA — The Utica Comets will open training camp Monday, Oct. 4. The projected practice schedule is for the team to hit the ice for two hours each day at 10 a.m., Monday through Thursday. The team will then have an exhibition game at 7 p.m. Friday, Oct. 8 at the Adirondack Bank Center against the Rochester Americans. The Comets will then play an exhibition game at 5 p.m. Saturday on the road against the Syracuse Crunch.
UTICA, NY・14 DAYS AGO
lakers365.com

The Lakers have six preseason games this season, and Frank Vogel said they're going to try and be smart with some of their veterans in terms of game action. As such, LeBron James, Russell Westbrook and Carmelo Anthony will watch the Nets game in street clothes, alongside Ariza. Vogel will address their availability for the next game in the coming days, but all have looked good physically in camp thus far.
NBA・14 DAYS AGO
LA Kings Insider

Update On 10 Questions For Training Camp

7 – Where will Vladimir Tkachyov begin the 2021-22 season?. 6 – What does the left side of the defense look like to start the season?. 5 – Will Iafallo and Brown start the season on the top line?. 4 – How many centers will be on the Kings roster...
NHL・12 DAYS AGO
WOLF

For the first time in two years the Wilkes Barre Scranton Penguins have opened a full training camp in October. With the opening of the regular season just over a week away the team is happy to be back in town skating. JD Forrest, WBS Penguins Coach says, “ It...
NHL・10 DAYS AGO