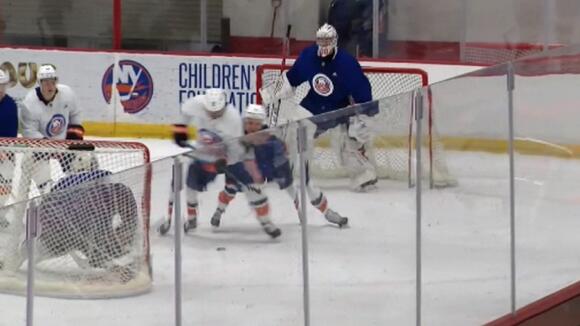 The Islanders opened training camp today with plenty to look forward to in 2021-22.

They’ve added a couple of all-stars, have a new arena and renewed Stanley Cup dreams.

The Isles knocked on the Stanley Cup door two seasons ago and knocked even louder last season, falling within one game of the Finals.

Now, the time has arrived to start that climb all over again.

“Two long runs, being where we were and having the chance we had, you almost look ahead a little bit you have to kind of reel it back in,” Brock Nelson said.

The Isles return mostly the same core that went on those runs. They added 37-year-old Zach Parise, and a slightly bigger addition -- 6-foot-9 to be exact -- in former Islander, 44-year-old Zdeno Chara.

“We were pretty excited when we saw that signing couple of guys,” Nelson added. “If he didn't sign here, they were hoping he retired. He's obviously had a great career. Guys have played and battle with him.”

The Islanders also had a welcome sight at practice with the return of captain Anders Lee. Lee is fully recovered from torn ACL, but not over missing out on last year's playoff run.

“It was really hard to not be able to be on the ice with your team and the boys the way they played on the ice was inspiring for me and what i was going through,” said Lee.

This season marks Barry Trotz's fourth year at the helm, and there's no mistaking what the Islanders are thinking.

“We're looking at ways to continue to climb up that mountain so hopefully one day can lift the Cup over our heads,” he said.

The Islanders play the Rangers in their first preseason game Sunday at the Garden. The first game that counts is Oct. 13.

Bronx mother frustrated with infestation of rodents in apartment building

A Bronx mother says she is fed up with what she claims are poor living conditions inside her West Farms apartment. She’s demanding the building management take care of the rodent issue in her apartment. The woman who wanted to remain anonymous, says she believes the mice are coming from...
BRONX, NY・1 DAY AGO
News 12

Some families are calling for a specific Halloween accessory to be taken off the shelves. Pens resembling hypodermic needles and syringes are not uncommon to see when searching at Halloween sections in stores, but those who lost people to drug overdoses say it’s offensive. “I’m absolutely appalled by it because...
LIDO BEACH, NY・1 DAY AGO
News 12

Dozens of firefighters throughout the Hudson Valley gave a drive-by salute on Saturday to Darius Lloyd, son of fallen firefighter Jared Lloyd, before his 5th birthday. Jared Lloyd, 35, a Spring Valley volunteer firefighter, died in the line of duty while battling a nursing home blaze in March. On Saturday,...
SPRING VALLEY, NY・1 DAY AGO
NHL

Lee's return to lineup, Parise's to Minnesota part of New York's first 13 games away from home. The New York Islanders are getting a permanent home with the opening of UBS Arena in Elmont, New York, but they'll have to wait until Nov. 20 before playing a game there. That...
NHL・10 DAYS AGO

The New York Islanders are coming off of their two most successful, post-cup era, seasons. Of course, they have been part of the final four teams, losing in Game 6 and Game 7 to the eventual champion Tampa Bay Lightning. Last season’s Game 7 loss stung especially due to the...
NHL・10 DAYS AGO
The Game Haus

Islanders Get Off To a Rough Start

There was a lot of excitement regarding this year’s Islanders team ahead of Thursday’s opening contest. But that excitement has quickly turned to mild concern after the Islanders lost their first two games of the season. First it was a 6-3 loss in a back and forth affair with the Carolina Hurricanes. Then it was a sloppy, 5-1 loss to the Florida Panthers on Saturday that dropped the Islanders to 0-2. While it is way too early to hit the panic button, these games did present some potential issues with this Islanders team.
NHL・6 DAYS AGO
WGR550

Ever since this started, we’ve known that the Sabres have wanted Peyton Krebs in any trade for Eichel with the Vegas Golden Knights. Krebs was the Golden Knights first pick in 2019
NHL・18 DAYS AGO
Sportsnaut

In today’s NHL rumors rundown, the Los Angeles Kings might be getting good news after what looked like a serious injury to defenseman Drew Doughty. Meanwhile, the status on a Vladimir Tarasenko trade seems to change weekly. How long will he be staying with the St. Louis Blues? The Ottawa Senators seemed to have dismissed rumors that they’re looking to add a top-nine center to their group and there were plenty of scouts at the Blackhawks game on Thursday, many of them likely checking in on Dylan Strome.
NHL・1 DAY AGO
102.5 WDVE

Major Update On When Sidney Crosby Will Return To Penguins

The Buffalo Sabres lost their first game of the season thanks to the Boston Bruins. The blue and gold were defeated 4-1 on Friday night at KeyBank Center.
NHL・1 DAY AGO
kingstonthisweek.com

The Kingston Frontenacs held off a late push from the Sudbury Wolves and escaped the Leon’s Centre with a 5-4 win in Ontario Hockey League action on Friday night in front of a crowd of 2,621. Story continues below. This advertisement has not loaded yet, but your article continues below.
NHL・8 DAYS AGO

Yows penalty kicks give Wildcats pair of one goal victories

LOUISBURG — The Wildcat soccer team won a defensive gem against state-ranked Eudora on a night both communities joined forces for Together We Fight to support the fight against cancer in Breast Cancer Awareness Month. Braden Yows blasted a penalty kick into the back of the net for what proved...
EUDORA, KS・10 DAYS AGO
WNCT

MONTREAL (AP) — Jesperi Kotkaniemi scored his first goal for Carolina in his return to Montreal, helping the Hurricanes beat the winless Canadiens 4-1 on Thursday night. The 21-year-old Kotkaniemi left the Canadiens for the Hurricanes over the summer after signing a $6.1 million offer sheet. The Finn was booed every time he touched the […]
NHL・2 DAYS AGO
Sportsnaut

First Jeff Carter, then a false positive for Tristan Jarry, now there’s a new Penguins player in COVID protocol. That is defenseman Kris Letang.
NHL・1 DAY AGO
93.7 The Fan

Earlier this week, it was announced that Jeff Carter tested positive for COVID-19, forcing Evan Rodrigues to be pushed to first line center. With the news about Carter came goalie Tristan Jarry being placed in COVID protocol, as well.
NHL・1 DAY AGO
San Diego Union-Tribune