MINNEAPOLIS (WCCO) – A Minnesota man stuck in Afghanistan is looking for help to get home.

Qais was granted U.S. citizenship in 2020 after working with troops for seven years in his home country of Afghanistan.

He went back to visit family and didn’t anticipate the country falling into the hands of the Taliban. 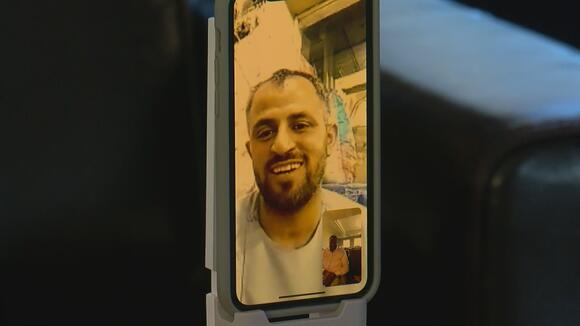 The evacuation of American citizens began on Aug. 15, and the next day, he and his wife welcomed a baby into the family.

Qais says he tried desperately to get to the airport in Kabul to get his family to safety.

“I was trying to make them understand that I got an email from the U.S. Embassy that all U.S. citizens needs to be in the airport with their family members because if your wife don’t have a visa or green card stuff you can take her with your U.S. passport,” Qais said.

Qais says his credentials meant nothing to Taliban fighters.

Qais kept trying. He even got close enough to American troops to show them his passport.

Qais says after that tragedy he became paralyzed with fear.

For more than a month, Sarah Lippert has been working to get her coworker out of Afghanistan.

“I am scared for his safety I am afraid for his family,” Lippert said.

Sarah Lippert says she’s gotten no response from her request for help.

Qais says he reached out to Sen. Klobuchar and Sen. Smith and did exactly what they told him to.

“I did all the requirements whatever they asked me – documents and other stuff – I already sent it to them and I haven’t heard anything yet,” Qais said.

He said as each day passes it gets more difficult to live under Taliban rule.

“Working with the U.S. Army against these people for seven years and then sitting in their environment and their government is really tough,” Qais said. “It’s very scary to be honest.”

“I hope our administration hears his story. I hope people who are in power to bring him home hear this and know he is important and it’s important to continue to bring our U.S. citizens home,” Lippert said.

Congresswoman Ilhan Omar’s office reached out to Qais’ friends late Thursday afternoon to tell them they’re hopeful he will be evacuated soon because he is a U.S. citizen.

A Marine officer whose viral videos criticizing senior officials for how they withdrew from Afghanistan created a political uproar will plead guilty to several charges and seek a discharge that allows him to keep some military benefits, one of his lawyers said Tuesday. Lt. Col. Stuart Scheller is scheduled for...
MILITARY・7 DAYS AGO
Newsweek

The Taliban Blames the U.S. for Afghanistan's Growing ISIS Problem

"There is no doubt that the malicious hand is behind the ISIS attack," Ahmad Yssir, protocol officer of the Taliban's political office in Qatar, told Newsweek.
POLITICS・6 DAYS AGO
Reuters

MOSCOW, Oct 13 (Reuters) - The United States' involvement in Afghanistan has led to tragedy, Russian President Vladimir Putin said on Wednesday, one week before Russia is due to host the Taliban in Moscow. After the United States and its allies withdrew their troops earlier this year after 20 years...
U.S. POLITICS・6 DAYS AGO
hngn.com

ISIS-K Claims Another Bombing Inside a Mosque; Iran Warns Against Plots To Tear Afghanistan Apart

As the Islamic State terrorist organization (ISIS) claimed yet another attack, the Iranian Foreign Ministry issued a warning about plans to destabilize Afghanistan. In a recently published article in Newsweek, on Friday, ISIS-K claimed responsibility for a suicide attack at a Shiite Muslim mosque in Kandahar that killed more than 50 people. Anas al-Khorasani and Abu Ali al-Balochi were the attackers' names, likely monikers for the two ancient areas of Khorasan and Balochistan, including portions of Afghanistan, Iran, and Pakistan.
MIDDLE EAST・3 DAYS AGO

Saleha, an Afghan woman who makes 70 cents a day as a house cleaner, gave her kid up because neither she nor her husband could pay the lender.
POLITICS・15 HOURS AGO
VTDigger

An Afghan refugee’s long journey from U.S. interpreter to a life in Vermont

When the Taliban gained control of Afghanistan in August, an Afghan citizen who had aided U.S. forces was able to escape with the help of a loose network of military members and veterans. Now he is headed to Vermont. Read the story on VTDigger here: An Afghan refugee’s long journey from U.S. interpreter to a life in Vermont.
VERMONT STATE・2 DAYS AGO
WashingtonExaminer

Private flights land in Doha after weeks stuck in Afghanistan

Two private flights carrying nearly 800 people left Kabul, Afghanistan , and landed in Doha, Qatar , after weeks of being stuck. Sayara International, a global development organization that has had a presence in Afghanistan for more than almost two decades, secured the departure and landing rights for the two flights.
LIFESTYLE・11 DAYS AGO
CBS Tampa

American Man Stuck In Afghanistan Still Struggling To Get Home

MINNEAPOLIS (WCCO) – Friends of a Minnesota man stuck in Afghanistan keep running into roadblocks to bring him home. Qais, a U.S. citizen went to visit family in Afghanistan, and got stuck after Kabul fell to the Taliban. Read more
LIFESTYLE・14 DAYS AGO

Biden's botched Afghanistan withdrawal keeps getting worse all the time

President Joe Biden and his administration assured us that they “planned for every contingency” in withdrawing from Afghanistan. Revisiting the latest news on that front, that claim remains laughable. The Wall Street Journal reports that Afghan families are now literally selling their children in order to repay debts. Afghanistan’s economy...
POTUS・5 HOURS AGO
Newsday

On July 8, President Joe Biden remarked that the United States had "provided our Afghan partners with . . . all the tools, training and equipment of any modern military" and promised that the United States would "ensure they have the capacity to maintain their air force." What Biden failed to mention, however, was that this "capacity" would be useless without the invisible army of civilian contractors who for two decades had provided logistical support to the U.S. and Afghan militaries.
MILITARY・12 DAYS AGO
counton2.com

Report: Marine who spoke out against U.S. leaving Afghanistan to be freed from Camp Lejeune brig on Tuesday

CAMP LEJEUNE, N.C. (WNCT) — The Marine who spoke out against how the U.S. exited from Afghanistan and was later placed in the brig at Camp Lejeune was scheduled for release on Tuesday. FoxNews.com reports former Marine Lt. Col. Stuart Scheller was initially jailed last Monday after he refused an...
MILITARY・14 DAYS AGO
newsy.com

Interpreter Who Helped The U.S. In Afghanistan Is Now Helping Refugees

Interpreter Who Helped The U.S. In Afghanistan Is Now Helping Refugees. Elyas Ibrahimi risked his life to interpret for the U.S. military in Afghanistan. Now, 7,000 miles away, he's interpreting for the military again – volunteering as a refugee at Fort Dix Army base in New Jersey. "The first day...
IMMIGRATION・12 DAYS AGO

SALT LAKE CITY, Utah (KUTV) — A Utah man is worried about his wife and children who are stuck in Afghanistan. They've been there for three months, he said, trying to get out with no success. The man, whom 2News is not identifying due to concerns about his family’s safety,...
UTAH STATE・8 DAYS AGO
Reuters

WASHINGTON, Oct 18 (Reuters) - The United States will not join international talks on Afghanistan organized by Russia this week due to logistical reasons, but is open to participating in the future, the State Department said on Monday. Moscow is hosting talks on Wednesday with officials from the Taliban, China...
FOREIGN POLICY・1 DAY AGO
kfgo.com

WASHINGTON (Reuters) -The United States will resume evacuation flights from Afghanistan before the end of the year, the Wall Street Journal reported on Thursday, citing an unidentified U.S. State Department official. The U.S.-sponsored flights would help U.S. citizens, legal residents and some visa applicants. No date has been set for...
POLITICS・5 DAYS AGO
Shore News Network

Damian Williams, the United States Attorney for the Southern District of New York, announced that a jury returned a guilty verdict last Friday against DELOWAR MOHAMMED HOSSAIN on both counts of the Superseding Indictment, for attempting to provide material support for terrorism and attempting to make a contribution of funds, goods, and services to the Taliban. United States District Judge Sidney H. Stein presided over the one-week trial.
BRONX, NY・7 DAYS AGO

U.S. 'working closely' with partners to resume regular evacuation flights out of Afghanistan

The U.S. State Department plans to resume regular evacuation flights out of Afghanistan before the end of the year, or "as soon as we have the right combination of documentation and logistics," said a senior department official to The Wall Street Journal. Since the U.S. occupation ended on Aug. 31,...
U.S. POLITICS・5 DAYS AGO
The Independent

In Pakistan’s rugged tribal regions along the border with Afghanistan a quiet and persistent warning is circulating: The Taliban are returning. Pakistan’s own Taliban movement, which had in years past waged a violent campaign against the Islamabad government, has been emboldened by the return to power of the Taliban in Afghanistan.They seem to be preparing to retake control of the tribal regions that they lost nearly seven years ago in a major operation by Pakistan’s military. Pakistani Taliban are already increasing their influence. Local contractors report Taliban-imposed surcharges on every contract and the killing of those who defy...
MIDDLE EAST・2 DAYS AGO
PBS NewsHour

Ambassador Zalmay Khalilzad, the man who made a deal with the Taliban, out as as U.S. special representative to Afghanistan

Ambassador Zalmay Khalilzad is stepping down as the U.S.’ top diplomat for Afghanistan, the State Department announced Monday, after a tumultuous three years in which he negotiated a peace agreement with the Taliban that promised a U.S. troop withdrawal, and helped execute the Biden administration’s chaotic departure from Afghanistan as the Taliban took over the country in August.
U.S. POLITICS・1 DAY AGO
BBC

A former interpreter for the British Army who feared his father was at "imminent risk" in Afghanistan has been reunited with him. Jamal Barak, who now lives in Coventry, said in August he had heard reports the Taliban was searching for his father, who had also worked for British forces.
FAMILY RELATIONSHIPS・1 DAY AGO