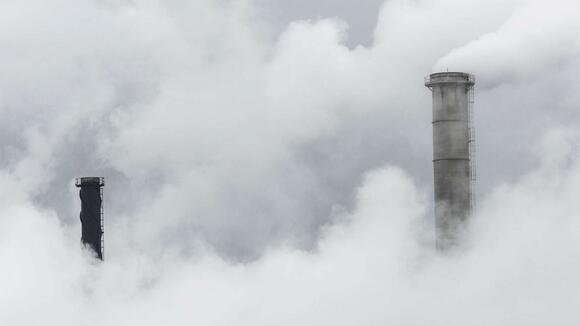 This is a major leap forward in the Biden administration's plan to combat climate change despite the president's $3.5 trillion reconciliation package, which includes an overhaul on climate policy, facing broad opposition from Republicans in Congress.

These greenhouse gases, known as hydrofluorocarbons or HFCs, have an impact on warming the climate that is hundreds to thousands of times greater than the same amount of carbon dioxide, senior Biden administration officials said in a call with reporters Wednesday.

The rule creates a legal requirement for companies and manufacturers to reduce HFCs and was first proposed in May under the 2020 American Innovation and Manufacturing Act, or AIM. The AIM Act requires the EPA to phase down the production and consumption of HFCs, manage the gases and their substitutes as well as facilitate the transition to new greener technologies.

Included in the new rule is the creation of a climate protection program that will phase down the production and consumption of HFCs by 85% within the next 15 years.

It's expected the phase down will reduce emissions by the equivalent of 4.5 billion metric tons of carbon dioxide by 2050. According to the EPA officials, that's equal to nearly three years of emissions from the U.S. power sector.

Reducing HFCs is part of the Biden administration's efforts to reduce the effects of climate change while also generating jobs, a key sticking point of his climate policy initiatives.

"This actually reaffirms what President Biden always says when he thinks about climate, he thinks about jobs," EPA Administrator Michael Regan told reporters Wednesday. "Because this administration knows what's good for the environment is also good for the economy. Transitioning to safer alternatives and more energy-efficient cooling technologies is expected to generate more than $270 billion in cost savings and public health benefits by the year 2050."

The EPA estimated that by the end of next year, the annual net savings of reducing HFC emissions will be $1.7 billion.

The rule also establishes an allowance and trading program to reduce HFCs. In accordance with the AIM Act, companies need an allowance to produce or import any HFCs or HFC-related products. The agency will have the allocation amounts distributed to each company by Oct. 1, according to Joseph Goffman, EPA acting assistant administrator.

According to the EPA, along with five other agencies, it will work to prevent the illegal importation and production of HFCs in the U.S. by creating an interagency task force.

In the 1990s, the value of seizures of refrigerants at the U.S.-Mexico border were second only to marijuana, according to the advocacy group Environmental Investigation Agency.

MORE: What Biden has done on climate change has activists applauding -- and waiting

Stephen Yurek, the president and CEO of the Air-Conditioning, Heating, and Refrigeration Institute, a policy group that represents the interests of manufacturers, said the institute has supported the rule since the beginning.

Climate advocates welcome the rule as well and that the Biden administration is moving forward to fulfill the requirements of the AIM Act, but some said this is just a starting point.

"It's now imperative to adopt additional rules that ensure a swift transition to new technologies and full lifecycle management of these gases," Christina Starr, senior policy analyst at the Environmental Investigation Agency, said in a statement.

Danielle Wright, the executive director of the North American Sustainable Refrigeration Council, which works to promote the transition to natural refrigeration agents such as ammonia, said there is no doubt that this rule is an important first step.

But the key about the rule is that it is a phase down, not a phase out, she said. It does not create a cost-effective pathway for companies to transition to the gases that have the lowest impact on the climate: natural refrigerants. Switching to these alternative gases for refrigeration and cooling would be the equivalent of switching to electric cars, according to Wright.

"In order to make that an economically viable decision, you need really strong policy," Wright said. "And so this policy is not strong enough to create those economically viable market conditions. It's still an environmental win, but we're not going as far as we could," she said.

By finalizing this rule, the U.S. will be in line with key components of the Montreal Protocol's Kigali Amendment -- an international agreement aimed at reducing the production of HFCs.

However, the U.S. has not ratified the Kigali Amendment to officially join the treaty, and the White House has yet to send the amendment to the Senate for ratification.

When asked by reporters when the president would send the amendment to the Senate, national climate adviser Gina McCarthy said she did not have a date for when that will happen.

Nonetheless, the EPA is calling this rule a historic step towards reducing the effects of climate change by implementing pollution regulations across multiple industries.

"This is a very proud moment for the EPA, and more importantly for the American people," Regan said.

As climate change makes its early impact in New Mexico with depleted rivers, increased wildfires and a drier landscape, everyone must pull together to avoid the most dire forecasts while ensuring minority communities and poorer residents aren’t left behind. That was the central theme echoed by political leaders, scientists, conservationists...
POLITICS・13 HOURS AGO
NPR

Greenhouse emissions reached record levels in 2020, even with pandemic lockdowns

Despite a world economy that slowed significantly due to COVID-19, the accumulation of greenhouse gases in the atmosphere reached a new record last year, putting the goal of slowing the rise of global temperatures "way off track," according to the World Meteorological Organization. The United Nations body said Monday that...
ENVIRONMENT・1 DAY AGO
news4sanantonio.com

UN: Greenhouse gases are the highest in 3 million years

A new United Nations report says greenhouse gases in the atmosphere have reached a record high. According to the World Meteorological Organization's annual Greenhouse Gas Bulletin, the concentration of carbon dioxide was 149% higher in 2020 than before widespread industrialization. The last time CO2 levels were this high was three-to-five...
ENVIRONMENT・1 DAY AGO
rccatalyst.com

The Lake Raleigh fishing pier lies 80 miles north of Ground Zero for the toxic compound GenX, the Chemours chemical plant near the Bladen-Cumberland county line. Presumably, you could safely eat the fish caught from this lake, which is on the NC State University campus, but given the widespread PFAS contamination of North Carolina’s waterways, only testing could tell you for sure.
ENVIRONMENT・4 DAYS AGO

The Environmental Protection Agency can be quite a useful thing if the administration in power remembers what it’s there for. For a while now, we here in the shebeen have been interested in the problem of polyfluoroalkyl and perfluoroalkyl substances (PFAS), the so-called “forever chemicals.” Because the current administration understands that it has an EPA, and that it can put the EPA to good use, it has decided to make some effort with regard to dealing with these poisons in the ground, and in the water, that an astonishing percentage of Americans are carrying around inside them. From the Washington Post:
ENVIRONMENT・5 DAYS AGO
neworleanssun.com

EPA to move against 'forever chemicals'

The Environmental Protection Agency this week said it will tackle the issue of "forever chemicals" — PFAS — and other substances that are carcinogenic and which can build up to toxic levels in animals, fish and people, including in Lake Superior smelt. The EPA for the first time will set...
ENVIRONMENT・6 DAYS AGO

Wis. (WBAY) - The federal government is joining the fight against ‘forever chemicals’ as the EPA announces a new plan to combat the pollution of PFAS. For years, Action 2 News has been following the issues caused by the man-made chemicals that are often found in firefighting foam and non-stick cookware.
WISCONSIN STATE・7 DAYS AGO
kalw.org

One Planet: How The Actions Of Indigenous Land Defenders Have Stopped Or Delayed Greenhouse Gas Pollution

On this edition of Your Call’s One Planet Series, we discuss a new report detailing how the actions of Indigenous land defenders have stopped or delayed greenhouse gas pollution equivalent to at least one-quarter of annual emissions in the US and Canada. We’ll also discuss the ongoing protests to Stop Line 3, which began carrying oil from Alberta, Canada to Superior, Wisconsin on October 1. Nearly 900 people have been arrested. The Canadian company Enbridge has reimbursed Minnesota police $2.4M for arresting and surveilling demonstrators, according to documents the Guardian obtained through a public records request.
ENVIRONMENT・8 DAYS AGO
bpr.org

Burning wood for electricity may be renewable, but it doesn't help the climate

Here's another example of a climate-change solution that may actually be the opposite. Wood pellets made from trees cut in the forests of North Carolina and the Southeast are a growing alternative fuel for power companies in Europe that want to be more climate friendly. Growth in wood pellet exports...
ENVIRONMENT・11 DAYS AGO
bloomberglaw.com

The EPA expects to release in a few months a national strategy to reduce plastic waste, improve recycling, and boost the market for recycled goods, a senior agency official said Thursday. The Environmental Protection Agency is working to transform its approach to solid waste management and recycling, said Nena Shaw,...
ENVIRONMENT・11 DAYS AGO
capecod.com

BARNSTABLE – The Barnstable Clean Water Coalition and Buzzards Bay Coalition are among four projects benefiting from federal funding to protect local watersheds. Other benefiting organizations include the University of New Hampshire Stormwater Center and Town of Charlestown, Rhode Island. The U.S. Environmental Protection Agency provided $599,993 in funding through...
BARNSTABLE, MA・11 DAYS AGO
pasadenanow.com

The League of Women’s Voters of Pasadena is urging the city to declare a climate emergency and to take actions to reduce locally generated greenhouse gas (GHG) emissions in response to the current climate crisis being faced by the country. During the meeting of the Environmental Advisory Commission last Tuesday,...
PASADENA, CA・11 DAYS AGO
The Intercept

At several recent information sessions on the risks posed by the carcinogenic air pollutant ethylene oxide, the Environmental Protection Agency invited local polluters to participate and failed to correct the companies’ false assertions that the chemical poses no danger. The EPA held eight meetings about ethylene oxide in Texas and...
ENVIRONMENT・13 DAYS AGO
24/7 Wall St.

This City Emits The Most Carbon Dioxide In The World

Carbon dioxide is an acidic colorless gas. Because it is soluble in water, it can be found in a number of liquids which include oil and natural gas. It is also a greenhouse gas found in the Earth’s atmosphere. Its concentration has increased over time because of, primarily, the burning of fossil fuels. The research […]
ENVIRONMENT・16 DAYS AGO
WashingtonExaminer

Daily on Energy: Biden under pressure not to show up to Glasgow climate talks empty-handed

Subscribe today to the Washington Examiner magazine and get Washington Briefing: politics and policy stories that will keep you up to date with what's going on in Washington. SUBSCRIBE NOW: Just $1.00 an issue!
PRESIDENTIAL ELECTION・23 HOURS AGO
dallassun.com

No time to lose in curbing greenhouse gases WMO report

Last year, heat-trapping greenhouse gases reached a new record, surging above the planet's 2011-2020 average, and has continued in 2021, according to a new report published on Monday by the UN weather agency. The World Meteorological Organization (WMO) Greenhouse Gas Bulletin contains a "stark, scientific message" for climate change negotiations...
ENVIRONMENT・1 DAY AGO
FOX40

Poll: Majority in US concerned about climate

President Joe Biden heads to a vital U.N. climate summit at a time when a majority of Americans regard the deteriorating climate as a problem of high importance to them, an increase from just a few years ago.
PRESIDENTIAL ELECTION・3 HOURS AGO
CBS News

Methane is a potent greenhouse gas, and reducing its emissions is one of the most important keys to curbing global warming. Cows are one of the main offenders, but experiments are proving that their level of gassiness is determined by genetics. CBS News’ Mark Phillips spoke to researchers hoping that breeding cows with the right genes could prove a cost-effective way to reduce cattle methane emissions by as much as 50%.
ENVIRONMENT・6 DAYS AGO