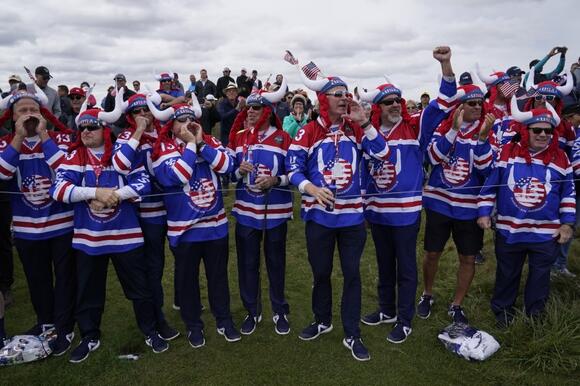 That’s a widely accepted truism at the Ryder Cup , which feels more like a football game than a traditional golf tournament. Energy pulsed through the gallery Thursday for the final practice rounds at Whistling Straits, as thousands of fans — urged on by the competitors — cheered and chanted U-S-A from the packed grandstands ringing the No. 1 tee box.

The competition starts in earnest Friday, at 7 a.m. local time, with foursomes. During the morning sessions Friday and Saturday, players on each two-man team play one ball and alternate hitting shots. In the afternoon sessions on that day the format is four-ball, meaning each member of a two-man team plays his own ball. (Sunday, the 12 players on each team square off in singles matches.)

“You step on the first tee and you know you're going to play two of the best players in the world,” said Jordan Spieth, playing in his fourth Ryder Cup.

Even for seasoned pros, that can be daunting. Three years ago, at Le Golf National in France, Spieth tried to settle the nerves of teammate Justin Thomas, who felt a surge of butterflies as he crossed the player bridge from the chipping green to the first tee. The towering stands surrounding the tee box seemed to climb into the clouds. Those had a seating capacity of 6,928, roughly one-third more than the first-tee stands this year.

“Jordan was great with me because it being my first match and him playing a couple, he'd been in my shoes before and he probably knew the things I was feeling,” Thomas said.

“I remember it like it was yesterday. We were walking across the bridge and it was four-ball the first match, and we talked about — four-ball is pretty kind of lenient on who goes first — and he said, 'Do you want to go first or me?’ I was like, 'I'm going,’ and he's like, 'You got it.’

“He knew it was going to take a couple holes for me to settle in and I rode my horse until I finally got comfortable. It's a bizarre feeling that's hard to explain, but I'm pretty excited to experience it again.”

The pressure is on the U.S. team, which has lost four of the last five times to the Europeans, despite having players who dominate in world rankings.

In a typical year there’s more balance among fans, with spectators rooting for the Americans or Europeans. Because of travel restrictions, however, the crowd this year will be lopsided in favor of the U.S. team.

“As the Ryder Cup has evolved I think it's become bigger every year as it becomes more — I thought last time in France, the size of that grandstand on the first tee and the grandness of it all, it definitely felt like that was the biggest yet,” said European mainstay Rory McIlroy, playing in his sixth.

“The Ryder Cup epitomizes everything that's great in the game of golf. It's competitive but there's also a lot of sportsmanship shown. And obviously there's partisan crowds and all of that, but that's part of being in a team environment. You're going to have a majority of the crowd rooting for one team or the other. I guess that's not something we get to experience every day.”

For some competitors, it starts even earlier.

“When the alarm goes in the morning,” said Ian Poulter, playing in his seventh. “You know it's coming. It's been building all week. It's exciting. … From the moment you kind of walk out your tunnel to getting that tee peg and attempting to put the ball on the tee, it's a pretty fun ride.”

SANTA FE, N.M. (AP) — An assistant director unwittingly handed Alec Baldwin a loaded weapon and told him it was safe to use in the moments before the actor fatally shot a cinematographer, court records released Friday show. “Cold gun,” the assistant director announced, according to a search warrant filed...
SANTA FE, NM・1 HOUR AGO
CBS News

The Supreme Court has agreed to fast-track challenges to the new abortion law in Texas. The justices will hear arguments November 1. But for now, the Texas law remains in effect. Ed O’Keefe has the details.
TEXAS STATE・4 HOURS AGO
CNN

(CNN) — The criminal contempt referral from the House of Representatives against right-wing agitator Steve Bannon landed at the DC US Attorney's Office on Thursday with unusual fanfare, setting off potentially weeks of legal decision-making at the Justice Department. The House's vote 229-202 vote Thursday to hold Bannon in contempt...
CONGRESS & COURTS・5 HOURS AGO
CNN

(CNN) — Now that the remains of Brian Laundrie have been positively identified by authorities, there are still lingering questions as to why, how and even when he disappeared in the days after his fiancée, Gabby Petito, was reported missing. His parents, Chris and Roberta Laundrie, may be vital to...
NORTH PORT, FL・9 HOURS AGO

The Centers for Disease Control and Prevention formally recommended booster shots for many recipients of Moderna and Johnson & Johnson's COVID-19 vaccines on Thursday. As a result, up to 99 million Americans are now eligible for additional doses. Providers expect to administer the first booster shots for the newly eligible...
PHARMACEUTICALS・15 HOURS AGO
Reuters

Queen Elizabeth resting after first night in hospital in years

LONDON, Oct 22 (Reuters) - Britain's Queen Elizabeth, 95, will spend Friday resting and undertaking light duties after she spent a night in hospital for the first time in years for what Buckingham Palace termed "preliminary investigations". The world's oldest and longest-reigning monarch stayed in hospital overnight on Wednesday but...
U.K.・12 HOURS AGO
ABC News

Group clings to faith as US works on Haiti kidnapping case

PORT-AU-PRINCE, Haiti (AP) — A U.S. religious organization whose 17 members were kidnapped in Haiti asked supporters on Friday to pray and share stories with the victims’ families of how their faith helped them through difficult times as efforts to recover them entered a sixth day. Ohio-based Christian Aid Ministries...
PUBLIC SAFETY・22 HOURS AGO

After wrapping his film “Archenemy,” director Adam Egypt Mortimer praised the people behind the scenes who made the project come to life. Halyna Hutchins, the director of photography, was the “wartime sister” of the group. She was “fighting the battles to make this thing look amazing despite the unrelenting limitations...
MOVIES・7 HOURS AGO
CBS News

Walmart is recalling room spray sold nationwide due to the possible presence of what federal regulators called a "rare and dangerous" bacteria that is linked to two deaths, including a child. The retailer sold about 3,900 bottles of Better Homes and Gardens-branded-Essential Oil Infused Aromatherapy Room Spray with Gemstones in...
FOOD SAFETY・1 HOUR AGO