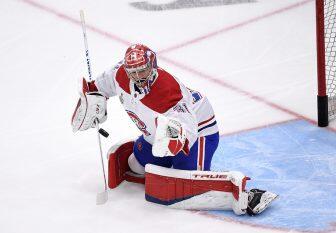 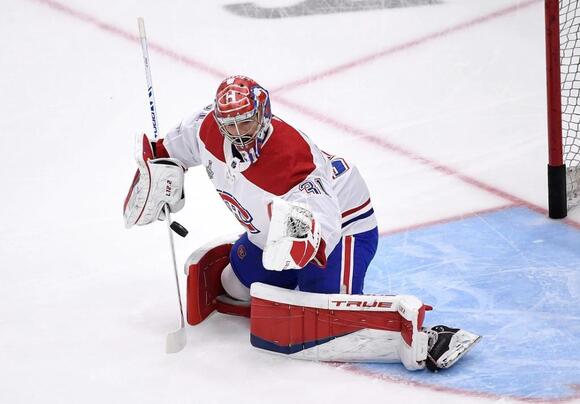 Price is expected to be ready for Montreal’s season opener against Toronto on Oct. 13.

Canadiens coach Dominique Ducharme said Hoffmann could miss the start of the season.

Price, 34, had knee surgery on July 23 in New York, following the Canadiens’ run to the Stanley Cup Final. In the postseason, he was 13-9 with a 2.28 goals-against average, a .924 save percentage and a shutout. He played in just 25 regular season games in 2020-21, missing time with a concussion and a lower body injury.

Hoffman had 36 points (17 goals, 19 assists) in 52 games last season with St. Louis. The left winger signed a three-year, $13.5 million deal with the Habs in the offseason. He was injured skating before arriving in Montreal but won’t require surgery.

Byron underwent hip surgery in July and is expected to be out until December.

Blueliner Joel Edmundson is day-to-day, and Brendan Gallagher has missed the outset of camp for family reasons and is expected to report later.

It goes without saying that when an organization infuses the type of star power that the Chicago Blackhawks have this past offseason, progress should follow. They’ve revised their roster from top to bottom, forcing the narrative away from being referred to as a mere rebuild. While those who have jumped aboard have to accept that a collective effort in Chicago’s favour is the priority, that doesn’t mean individual success should be neglected along the way. Good thing, too, as Marc-André Fleury is poised to reach new heights of superstardom in 2021-22.
NHL・10 DAYS AGO
Whiskey Riff

The NHL officially kicked off the 2021-2022 season this week and damn it’s good to have hockey back. The sounds of the stick slapping the ice and the puck hitting the glass, the insane saves from the goalies, the fights…and not just the ones on the ice. Obviously we’ve seen...
NHL・1 DAY AGO
Detroit Sports Nation

On Thursday night, Dylan Larkin made his debut as Captain of the Detroit Red Wings but he was unable to complete the game as he was ejected for throwing a haymaker after he was hit into the boards headfirst. The play came with the Red Wings leading the Tampa Bay...
NHL・2 DAYS AGO

The Sabres entertained their fans and won their first game

Jeff Skinner buried a slap shot right into the shin pads of Joel Armia. That sent Jake Evans in on shorthanded breakaway forcing Craig Anderson into a huge save, his first as a Sabre. THAT’S what’s been missing from this team for 10 years.
NHL・1 DAY AGO
Bleacher Report

The NHL and NHL Players' Association announced Thursday that Montreal Canadiens goalie Carey Price is taking leave from the team to voluntarily enter the NHL/NHLPA player assistance program. According to the Associated Press, the player assistance program was created in 1996, and it assists players and their families with "mental...
NHL・9 DAYS AGO
Chicago Tribune

What to know about the Chicago Blackhawks as they open the 2021-22 season tonight — including projected lineups, milestones and notable games to watch

The Chicago Blackhawks wrapped up training camp Tuesday at Fifth Third Arena and flew to Denver for Wednesday night’s season opener against the Colorado Avalanche at Ball Arena. With captain Jonathan Toews back this season and Patrick Kane set as the top alternate captain, coach Jeremy Colliton named Connor Murphy an alternate for road games, while Alex DeBrincat will wear the “A” during home ...
NHL・4 DAYS AGO
Sportsnaut

MLB world reacts to Mike Shildt being fired by the St. Louis Cardinals

Mike Shildt led the St. Louis Cardinals to a surprising 90-72 record this past season, only to see the team
MLB・2 DAYS AGO

New York Islanders: From the Hunters to the Hunted

For decades after their dynastic, Stanley-Cup-championship-winning run of the late 1970s and early 1980s, the New York Islanders were NHL roadkill – an organization that missed the playoffs in 16 of 23 seasons, and that had won a playoff round just once in that span. The team became a laughingstock,...
NHL・11 DAYS AGO
Sportsnaut

NHL Live Stream: How to Watch the 2021-22 Hockey Season Online

The 2021-2022 NHL season is here, with 32 teams battling it out on the ice for a chance to play for the 2022 Stanley Cup. The Tampa Bay Lightning are the current Stanley Cup champions and will be looking to repeat. Vegas oddsmakers have the Colorado Avalanche, Toronto Maple Leafs and the Las Vegas Golden Knights as top Cup contenders as well. How to Buy NHL Tickets Online After a year of playing to empty arenas due to Covid precautions, all the teams are offering in-person attendance this year, though some arenas will limit capacity and keep social distancing in place. If you want...
NHL・2 DAYS AGO

BOSTON (CBS) — The Boston Bruins will honor the late Jimmy Hayes with a special decal on their helmets during Saturday night’s season opener against the Dallas Stars. When the Bruins take the ice for their opener at TD Garden, players will be sporting a “Jimmy 11” decal in honor of Hayes, who died unexpectedly at his Milton home in August. The former Bruins forward and Dorchester native was just 31 years old at the time of his passing. The Bruins shared a few pictures of the decal on their social media channels on Saturday: For Jimmy. 💛🖤 pic.twitter.com/7ZAOF31LpP — Boston Bruins (@NHLBruins) October 16, 2021 View this post on Instagram A post shared by Boston Bruins (@nhlbruins) Hayes enjoyed a seven-year NHL career, including two seasons with his hometown Bruins. He played three years of collegiate hockey at Boston College and won an NCAA Championship with the Eagles in 2010.
NHL・16 HOURS AGO
Denver7 News KMGH

BOSTON (CBS) — Charlie McAvoy is now going to be a member of the Boston Bruins for a long, long time. The 23-year-old defenseman was all smiles when chatting with reporters about his new eight-year extension with Boston on Friday. Receiving the biggest deal that the Bruins have every handed out likely played a part in McAvoy’s endless grin. But he’s really just happy to be in Boston for the foreseeable future, a place that the Long Island native now calls home. “There is no place I’d rather be,” said McAvoy. “It’s such an emotional day and a bit of a whirlwind,...
NHL・1 DAY AGO
ABC Action News WFTS

Just shy of the Brandon border you'll find the second home of the Tampa Bay Lightning. The TGH Ice Plex has been serving the community and the Bolts for 24 years. "They've been training here for 24 years, we've served as the official training facility. We're here to support you know, their endeavors. Their continued growth is our continued growth you know, just them being here in the building, you know, gets people excited," said Wes Reid, Director of the TGH Ice Plex.
NHL・2 DAYS AGO

PHILADELPHIA (CBS) — The Flyers started their new season Friday night with a 5-4 shootout loss to  the Vancouver Canucks. It was the first time the Wells Fargo Center was at full capacity for a Flyers game since the pandemic. It had been over 500 days since the Flyers played in front of a packed house, so fans had a lot of bottled-up energy, including Gritty. “Are you kidding me? This is the best time ever, it’s like Christmas morning,” one fan said. Gritty brought the party to the Flyers opening night. The team wants fans to #BringItToBroad too, bring the die-hard spirit,...
NHL・1 DAY AGO
Sportsnaut

Elias Pettersson and J.T. Miller each scored in the shootout and the Vancouver Canucks defeated the host Philadelphia Flyers 5-4
NHL・22 HOURS AGO
WGN Radio

Jack Hughes scored his second goal of the game less than a minute into overtime and the New Jersey Devils beat the Chicago Blackhawks 4-3 after blowing a late two-goal lead on Friday night.
NHL・1 DAY AGO