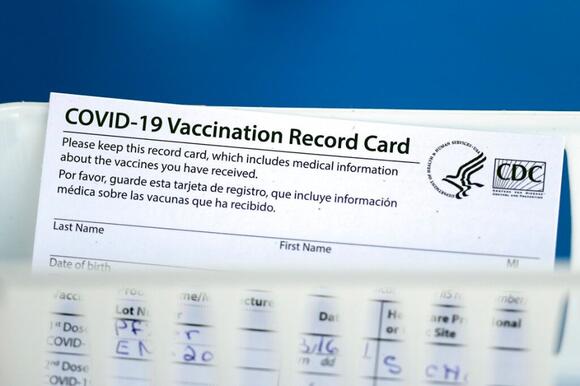 WASHINGTON (AP) – The U.S. vaccination drive against COVID-19 stood on the verge of a major new phase as government advisers Thursday recommended booster doses of Pfizer’s vaccine for millions of older or otherwise vulnerable Americans — despite doubts the extra shots will do much to slow the pandemic.

Advisers to the Centers for Disease Control and Prevention said boosters should be offered to people 65 and older, nursing home residents and those ages 50 to 64 who have risky underlying health problems. The extra dose would be given once they are at least six months past their last Pfizer shot.

But deciding who else might get one was far tougher. While there is little evidence that younger people are at risk of waning immunity, the panel offered the option of a booster for those 18 to 49 who have chronic health problems and want one.

Still, getting the unvaccinated their first shots remains the top priority, and the panel wrestled with whether the booster debate was distracting from that goal.

Here’s what medical officials are saying about COVID-19 boosters

All three of the COVID-19 vaccines used in the U.S. still are highly protective against severe illness, hospitalization and death, even amid the spread of the extra-contagious delta variant. But only about 182 million Americans are fully vaccinated, just 55% of the population.

“We can give boosters to people, but that’s not really the answer to this pandemic,” said Dr. Helen Keipp Talbot of Vanderbilt University. “Hospitals are full because people are not vaccinated. We are declining care to people who deserve care because we are full of unvaccinated COVID-positive patients.”

Thursday’s decision represented a dramatic scaling back of the Biden administration plan, announced last month, to dispense boosters to nearly everyone to shore up their protection. Late Wednesday, the Food and Drug Administration, like the CDC, signed off on Pfizer boosters for a much more targeted slice of the American population than the White House envisioned.

It falls to the CDC to set final U.S. policy on who qualifies for the extra shot.

Still, even a limited rollout of boosters marks an important shift in the nation’s vaccination drive. Britain and Israel are already giving a third round of shots over strong objections from the World Health Organization that poor countries don’t have enough for their initial doses.

CDC Director Dr. Rochelle Walensky opened Thursday’s meeting by stressing that vaccinating the unvaccinated remains the top goal “here in America and around the world.”

Walensky acknowledged that the data on who really needs a booster right away “are not perfect.” “Yet collectively they form a picture for us,” she said, “and they are what we have in this moment to make a decision about the next stage in this pandemic.”

The CDC panel stressed its recommendations will be changed if new evidence shows more people need a booster.

The CDC advisers expressed concern over the millions more Americans who received Moderna or Johnson & Johnson shots early in the vaccine rollout. The government still hasn’t considered boosters for those brands and has no data on whether it’s safe or effective to mix-and-match and give those people a Pfizer shot.

“I just don’t understand how later this afternoon we can say to people 65 and older you’re at risk for severe illness and death but only half of you can protect yourselves right now,” said Dr. Sarah Long of Drexel University.

But for most people, if you’re not in a group recommended for a booster, “it’s really because we think you’re well-protected,” said Dr. Matthew Daley of Kaiser Permanente Colorado. “This isn’t about who deserves a booster, but who needs a booster.”

The CDC presented data showing the vaccines still offer strong protection for all ages, but there is a slight drop among the oldest adults. And immunity against milder infection appears to be waning months after people’s initial immunization.

Among people who stand to benefit from a booster, there are few risks, the CDC concluded. Serious side effects from the first two Pfizer doses are exceedingly rare, including heart inflammation that sometimes occurs in younger men. Data from Israel, which has given nearly 3 million people — mostly 60 and older — a third Pfizer dose, has uncovered no red flags.

The panelists also wrestled with how to even tell when a booster is needed. While an extra dose revs up numbers of virus-fighting antibodies, those naturally wane over time and no one knows how long the antibody boost from a third Pfizer dose will last — or how much protection it really adds since the immune system also forms additional defenses after vaccination.

The U.S. has already authorized third doses of the Pfizer and Moderna vaccines for certain people with weakened immune systems, such as cancer patients and transplant recipients. Other Americans, healthy or not, have managed to get boosters, in some cases simply by asking.

The coronavirus pandemic is ebbing in some states, raging in others, and one thing is for certain: You can take measures to protect yourself, no matter where you live. One way to do so is to learn how most people catch COVID—and not do what they do. Here are the ways most people catch COVID, as proven by studies. Read on till the very end to stay healthy—and to ensure your health and the health of others, don't miss these Sure Signs You've Already Had COVID.
PUBLIC HEALTH・8 DAYS AGO
Best Life

If You Got Moderna, Dr. Fauci Warns Against Doing This

Health experts have been weighing the risks and benefits of offering booster doses over the last few months, leading up to a recent decision by the U.S. Food and Drug Administration (FDA) and the Centers for Disease Control and Prevention (CDC) to authorize a third shot of Pfizer to groups of people at high risk for severe COVID. This decision has resulted in hundreds of thousands of adults across the U.S. scheduling booster dose appointments for the coming weeks. But while some recipients of the other vaccines may be considering signing up for an additional dose despite not yet being authorized to do so, there is a reason you should wait—especially if you got the Moderna vaccine, White House Chief COVID adviser Anthony Fauci, MD, recently warned.
PUBLIC HEALTH・27 DAYS AGO

Here are the Side Effects of the Third COVID Booster Shot, According to the CDC

Getting a third COVID booster shot has become one of the most highly debated subjects lately. Plenty of people are interested in it, and now, the CDC (Centers for Disease Control and Prevention) comes to tell us about the side effects. DeseretNews reveals that the CDC says that those who...
PUBLIC HEALTH・29 DAYS AGO
POLITICO

Mark A. Rothstein is Herbert F. Boehl Chair of Law and Medicine and Director of the Institute for Bioethics, Health Policy and Law at the University of Louisville School of Medicine. In Cullman, Ala., Ray DeMonia was having a cardiac emergency and sought treatment at his local hospital, but he...
PUBLIC HEALTH・1 DAY AGO
Business Insider

Individuals who are fully vaccinated now might not be considered so in the future without a COVID-19 booster shot, CDC says

Currently, being fully vaccinated in the US means an individual has both doses of the Pfizer or Moderna vaccine or one dose of the J&J vaccine.
PHARMACEUTICALS・4 DAYS AGO
Best Life

Half of Moderna Booster Recipients Have These 4 Side Effects, CDC Says

At the end of September, the U.S Food and Drug Administration (FDA) and the Centers for Disease Control and Prevention (CDC) officially approved a booster shot of the Pfizer COVID vaccine for select groups of people in the U.S. The FDA is planning to discuss booster shots of the Moderna and Johnson & Johnson vaccines on Oct. 14. That means for people who didn't get Pfizer, there's little to do but wait. But even if you can't get a Moderna booster yet, you still probably want to know what vaccine reactions you should prepare for. Thankfully, the CDC has released recent trial data that reveals the most common side effects of the Moderna booster shot.
PHARMACEUTICALS・23 DAYS AGO

The FDA conducted two drug recalls and urged the people to stop taking them and contact their doctors immediately. Lupin Pharmaceuticals Recall Batches of Its Tablets. Lupin Pharmaceuticals is recalling batches of Irbesartan Tablets and Irbesartan with Hydrochlorothiazide Tablets, according to the FDA. Doctors prescribe the drug to individuals with type 2 diabetes to manage hypertension, low blood pressure, and symptoms, as per MSN News.
GROCERY & SUPERMAKET・9 DAYS AGO
truthorfiction.com

AdvertisementsOn October 26 2021, an undated Twitter screenshot circulated, claiming that the “FDA vaccine advisory board” had bemoaned that unvaccinated Americans are highly educated:. Contextual information about the tweet (originally tweeted by @Leve_raged) was missing; the tweet itself said:. FDA vaccine advisory board said Friday unvaccinated are more educated on...
PHARMACEUTICALS・16 HOURS AGO
FOX 43

More vaccinated people are getting hospitalized with COVID-19, but unvaccinated still make up the majority

PENNSYLVANIA, USA — Pennsylvania is seeing an uptick in vaccinated people being hospitalized with COVID-19. But the same PA Dept of Health report showed unvaccinated people still accounted for 74% of the 4,989 hospitalizations over the last month amidst the highly contagious delta variant. Pennsylvania leaders said the uptick of...
PUBLIC HEALTH・18 DAYS AGO
EverydayHealth.com

We asked a pediatrician about the COVID-19 vaccine for kids. Here's what he said

Children aged 5 to 11 will soon be able to get a COVID-19 vaccine at their pediatrician's office, local pharmacy and potentially even their school, the White House announced on Wednesday as it detailed plans for the expected authorization of the Pfizer shot for younger children in a matter of weeks.
KIDS・2 DAYS AGO
NEWS CENTER Maine

VERIFY: No, mRNA technology in Pfizer and Moderna's COVID-19 vaccines is not new or experimental

National Institutes of “intentionally misrepresented” the conclusions of an August study on people with natural immunity from COVID-19 in violation of his agency’s scientific integrity policy, a watchdog group alleged in a complaint Wednesday. The watchdog group, Protect the Public’s Trust, alleged in its complaint that Collins violated his agency’s...
PUBLIC HEALTH・18 HOURS AGO
FOX 4 WFTX

US biotech firm Moderna said Monday its Covid vaccine was safe and produced a strong immune response in children aged 6-11, adding it would submit trial data to global regulators soon. The news comes as a panel of government advisors was preparing to meet Tuesday on the question of whether to authorize the Pfizer vaccine in kids aged 5-11, with top infectious disease expert Anthony Fauci predicting it would be available by mid-November. "We are encouraged by the immunogenicity and safety profile of mRNA-1273 in children aged 6 to under 12 years and are pleased that the study met its primary immunogenicity endpoints," Moderna chief executive Stephane Bancel said in a statement. An interim analysis from a mid-to-late stage clinical trial of 4,753 children showed that two doses of vaccine produced a high level of neutralizing antibodies -- Y-shaped proteins that bind to the coronavirus and block it from entering human cells.
KIDS・2 DAYS AGO
FOX 5 San Diego

As some people receive a third COVID vaccine dose, or booster shot, the Centers for Disease Control and Prevention is now talking about a fourth dose.
SAN DIEGO, CA・20 HOURS AGO