Rocket launch scheduled at Vandenberg Space Force Base next week 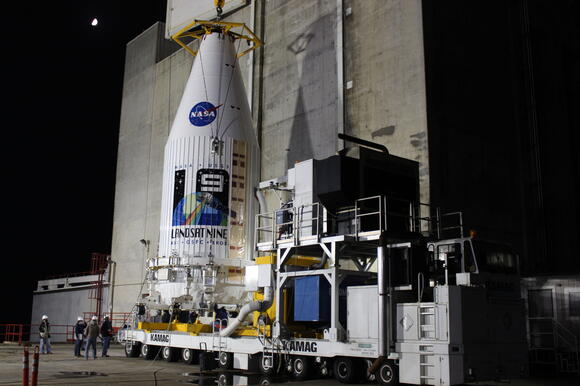 VANDENBERG SPACE FORCE BASE, Calif. -- The ULA Atlas V carrying the Landsat 9 will launch at Vandenberg Space Force Base on Monday.

The Landsat 9 observatory will be in a near-polar, sun-synchronous orbit.

The post Rocket launch scheduled at Vandenberg Space Force Base next week appeared first on NewsChannel 3-12 .

New scientific study confirms Orbex Prime’s carbon footprint up to 96 per cent lower than fossil fuelled alternatives. Orbex commits to offsetting all residual carbon emissions from launch operations. FORRES, UK, October 21, 2021 – The carbon footprint of launching the new Orbex Prime space rocket will be up to...
AEROSPACE & DEFENSE・18 HOURS AGO
The Independent

Nasa’s Perseverance rover has recorded five hours of sounds from Mars and scientists said it made them feel as if they were “right there on the surface.”The rover now has the unique distinction of becoming the first spacecraft to record the sounds of the Red Planet through dedicated microphones, according to a press release issued by the space agency on Monday.“Sound on Mars carries much farther than we thought. It shows you just how important it is to do field science,” said Nina Lanza, a SuperCam scientist working with mic data at the Los Alamos National Laboratory (LANL) in...
AEROSPACE & DEFENSE・2 DAYS AGO
AFP

South Korea launched its first domestically developed space rocket on Thursday but failed to put its dummy payload into orbit, a setback in the country's attempts to join the ranks of advanced space-faring nations. Even now, only six nations -- not including North Korea -- have successfully launched a one-tonne payload on their own rockets.
AEROSPACE & DEFENSE・1 DAY AGO
Digital Trends

NASA has taken a big step toward the launch of the Artemis I moon mission after placing the Orion crew capsule atop the almighty SLS rocket. The delicate operation was carried out on Wednesday, October 20 at NASA’s Kennedy Space Center in Florida. “One step closer,” the space agency said...
AEROSPACE & DEFENSE・1 DAY AGO

Space exploration is also getting a boost amid all the excitement surrounding space tourism. Satellite launch service provider Rocket Lab secured a partnership with NASA this month to develop a solar sail launch for deep space or interplanetary exploration purposes. Founder and CEO Peter Beck joined Cheddar to discuss the details of the technology and the timeline for launch.
AEROSPACE & DEFENSE・10 HOURS AGO
SpaceNews.com

WASHINGTON — NASA is beginning the process to procure more commercial crew flights as it looks to extend the International Space Station through the end of the decade, including the opportunity for new entrants to join the program. NASA issued a request for information (RFI) Oct. 20 seeking information from...
AEROSPACE & DEFENSE・1 DAY AGO
SlashGear

NASA is putting out a call for more astronaut shuttles, expanding the Commercial Crew program with additional missions beyond those already agreed with SpaceX and Boeing. The request for “safe, reliable, and cost-effective human space transportation services to and from the International Space Station” comes as the US space agency looks ahead to the future of the ISS and, beyond … Continue reading
AEROSPACE & DEFENSE・1 DAY AGO
omahanews.net

INTERNATIONAL SPACE STATION: The International Space Station (ISS) unexpectedly tilted after a faulty test firing of thrusters on a Russian Soyuz MS-18 spacecraft, the second such incident aboard the ISS. According to a statement from Russia's Roscosmos space agency, those aboard the ISS were never at risk. NASA and Roscosmos...
AEROSPACE & DEFENSE・1 DAY AGO

GOHEUNG/SEOUL, South Korea (Reuters) -South Korea's push for a domestically made space rocket promises wide-ranging benefits for its military and government, with a fillip to national prestige - but it is also good for business. Despite Thursday's mission being incomplete, the project will press ahead towards its goal of launching...
AEROSPACE & DEFENSE・1 DAY AGO
CNET

This story is part of Welcome to Mars, our series exploring the red planet. The rovers are back, Mars fans! After going quiet for a few weeks due to the Mars solar conjunction, NASA's red planet explorers are warming up to continue their missions. To celebrate, NASA released a Perseverance rover point-of-view video showing the wheeled vehicle going for a spin across Mars.
AEROSPACE & DEFENSE・2 DAYS AGO
SlashGear

NASA’s Lucy spacecraft may have launched successfully earlier this month, but the mission to scope out eight distant asteroids continues to be impacted by the probe’s malfunctioning solar array. Lucy blasted off from Cape Canaveral Air Force Station in Florida on Saturday, October 16, but it was when the spacecraft separated from the rocket that the issue arose.
AEROSPACE & DEFENSE・2 DAYS AGO
Space.com

Rocket Lab to recover booster on launch next month

Rocket Lab will take another step toward booster reusability next month, if all goes according to plan. Rocket Lab intends to recover the first stage of an Electron launcher during its next mission, which is scheduled to lift off from New Zealand during a two-week window that opens on Nov. 11, representatives of the California-based company announced on Tuesday (Oct. 19).
AEROSPACE & DEFENSE・2 DAYS AGO
Cosmos

Mountains of space junk could carry us to Mars

Space is big. Really big. And there’s not much up there – except all the trash. And that’s suddenly become a valuable resource, as recycling space junk could put an end to the days of fire-and-forget satellite launches. Thanks to South Australian space-industry start-up Neumann Space, every piece of scrap...
ASTRONOMY・3 DAYS AGO
Space.com

Senate directs NASA to choose another company to build a lunar lander: report

The United States Senate's largest committee wants NASA to choose a second company to build its new moon lander. In April of this year, NASA announced that SpaceX alone had won the contract to build the agency's next moon lander for its Artemis program, which aims to return humans to the moon's surface by 2024 and create a sustainable human presence on our nearby satellite. This came as a surprise as many expected the agency to choose two of the three companies vying for the contract to keep them competitive and to have a backup built.
CONGRESS & COURTS・3 DAYS AGO
verticalmag.com

Rocket Lab to introduce helicopter operations during next launch

Estimated reading time 4 minutes, 23 seconds. Rocket Lab USA, Inc has revealed it will attempt a controlled ocean splashdown and recovery of the first stage of an Electron rocket during the company’s next launch in November. The mission will be Rocket Lab’s third ocean recovery of an Electron stage; however, it will be the first time a helicopter will be stationed in the recovery zone around 200 nautical miles offshore to track and visually observe a descending stage in preparation for future aerial capture attempts. The helicopter will not attempt a mid-air capture for this mission but will test communications and tracking to refine the concept of operations (CONOPS) for future Electron aerial capture.
AEROSPACE & DEFENSE・3 DAYS AGO
Inverse

Earlier this week, I suggested that William Shatner was the perfect personality for Blue Origin to generate positive publicity. Judging by the interrupted coverage of the rocket launch on CNN Wednesday, perhaps the man who played Captain Kirk (now age 90) is just what Jeff Bezos’ oft-criticized rocket company needed.
AEROSPACE & DEFENSE・8 DAYS AGO
fox10phoenix.com

VAN HORN, Texas - Actor William Shatner, known to many "Star Trek" fans as Captain James T. Kirk, rocketed into space on Wednesday aboard a Blue Origin flight. The suborbital spaceflight, courtesy of Blue Origin founder and "Star Trek" fan Jeff Bezos, lifted off just before 10:50 a.m. ET from West Texas. Shatner, 90, officially became the oldest person in space and was joined by three others — two of them paying customers — for the quick flight.
AEROSPACE & DEFENSE・9 DAYS AGO
spaceexplored.com

When is the next crewed launch to space?

Startup Varda Space says it has contracted with SpaceX to launch its first satellite – based on a Rocket Lab bus called Photon – on a Falcon 9 rideshare mission in early 2023. Founded in late 2020, Varda Space says its mission “is to build the first space factory” –...
AEROSPACE & DEFENSE・10 DAYS AGO
Grand Forks Herald

U.S. Air Force Gen. Mark Kelly, commander of the Air Combat Command, visited Grand Forks Air Force Base on Oct. 7 to discuss the future of the intelligence, surveillance and reconnaissance mission located there. The visit was announced in a release from GFAFB's Public Affairs department. Kelly, who visited GFAFB...
GRAND FORKS AIR FORCE BASE, ND・11 DAYS AGO