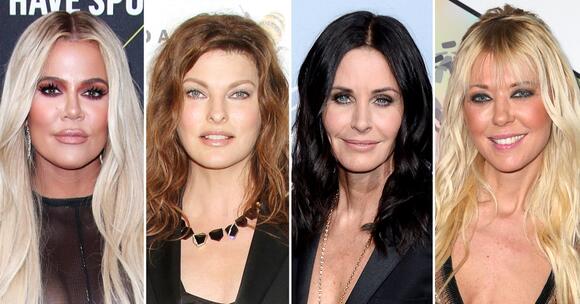 Some of the most beautiful celebrities in Hollywood have been the victims of plastic surgery gone wrong.

From botched procedures to one too many fillers, Khloé Kardashian, Tara Reid and Janice Dickinson are just some of the celebs who have opened up and admitted to going overboard with cosmetic surgery procedures.

In a 2006 interview with The Today Show, Tara admitted to getting botched breast implants. The whole world got to see the results when she attended Diddy’s 35th birthday party and the strap of her gown slipped down, exposing her bare left breast to a wall of paparazzi on the red carpet.

“That was terrible,” Tara said of the incident. “I became known as having the ugliest breast in the world. It was all over these web sites. Millions of them.”

“I was already dealing with what it looked like. The last thing I wanted to happen was to have the whole world see it,” she said. “The actual center part, where the areola is, instead of being a circle, it turned out to be a large square. It was horrifying.” Tara added, “It was very irregular like a goose shape egg. It was terrible.”

Tara admitted Tinseltown pressure caused her to go under the knife. “I originally did it because I had one breast bigger than the other. But I also gained and lost weight so they were getting saggy, and in Hollywood, you have to look great.” Tara also got liposuction on her stomach that left her skin looking rippled and lumpy.

Eventually, she underwent corrective procedures that have left her happy with her body. “I feel like a girl again. I walk out of the shower now and it’s like ‘wow I’m back,'” Tara admitted.

Most recently, OG supermodel Linda Evangelista revealed that her five-year absence from the public eye was due to getting the non-surgical cosmetic procedure called coolsculpting to her face, which is supposed to use cold temperatures to reduce fat deposits. But she allegedly had a rare reaction that caused fat cells to multiply instead.

“To my followers who have wondered why I have not been working while my peers’ careers have been thriving, the reason is that I was brutally disfigured by… [a procedure] which did the opposite of what it promised,” Linda explained in a September 23, 2021, Instagram post.

Linda, who was one of the great beauties in the world of modeling since the late ’80s, added, that the her alleged disfigurement, “has not only destroyed my livelihood, it has sent me into a cycle of deep depression, profound sadness and the lowest depths of self-loathing. In the process I have become a recluse.”

The CoolSculpting website includes a disclaimer about the risk of a similar result to Linda’s alleged condition. “Rare side effects may also occur,” the site’s disclaimer reads. “CoolSculpting and CoolSculpting Elite may cause a visible enlargement in the treated area, which may develop two to five months after treatment and requires surgical intervention for correction.” Life & Style reached out for comment but did not immediately hear back.

For a look celebrity plastic surgery and cosmetic procedures gone wrong, click through the gallery below!

Did Cheryl Burke Get Plastic Surgery? The ‘DWTS’ Pro Has Been Fighting Rumors for Years

Dancing With the Star’s fan-favorite Cheryl Burke has been on the dance competition show since 2006 — she even took home the coveted Mirrorball during her first season on the show. Naturally, 15 years after she first hit the ballroom, the professional dancer’s looks have changed. Followers of the ABC...
CELEBRITIES・28 DAYS AGO
Hello Magazine

Jamie Lee Curtis has been inundated with support after admitting she had plastic surgery she 'hated', and calling out the term 'anti-ageing' on an episode of Lorraine. After Lorraine Kelly explained that Dawn French had recently spoken out about getting a grey bob to "channel" Jamie, Jamie said: "Lovely! I have been an advocate for natural beauty for a long time. Mostly because I had the trial and error of the other part for a long time.
BEAUTY & FASHION・12 DAYS AGO
E! News

Watch: Bhad Bhabie Claps Back at Plastic Surgery Claims. Bhad Bhabie wants to set the record straight. The 18-year-old social media star, who first went viral after her 2016 appearance on Dr. Phil, took to Instagram on Oct. 10 to address the recent criticism over her appearance. In the process, the star also opened up about the cosmetic procedures she's already gotten.
BEAUTY & FASHION・13 DAYS AGO
Life and Style Weekly

Most celebs would never admit to getting plastic surgery. However, these stars not only opened up about going under the knife but also revealed they were the victims of botched surgeries and other work. From supermodel Linda Evangelista to actress Tara Reid, not even the rich and famous are exempt from failed cosmetic procedures.
BEAUTY & FASHION・28 DAYS AGO

Jamie Lee Curtis, 62, has discussed her regrets about having plastic surgery, including Botox and lipo, as she admitted that the cosmetic procedures made her “feel worse.”. Per Daily Mail, the Halloween actress insisted that she’s now an advocate for “not f—ing with your face.”. “I did plastic surgery –...
BEAUTY & FASHION・13 DAYS AGO
Page Six

“Halloween Kills” star Jamie Lee Curtis wants young people to run away from the knife in real life. “The current trend of fillers and procedures, and this obsession with filtering, and the things that we do to adjust our appearance on Zoom are wiping out generations of beauty,” the 62-year-old actress told Fast Company.
BEAUTY & FASHION・19 DAYS AGO
The Guardian

When it comes to cosmetic surgery, appearances can be deceiving | Yael Lefkovits

Kate* had no idea that underpinning the lower cost of her procedure was a lack of training, expertise and anaesthetic support
SKIN CARE・12 DAYS AGO
Vogue

I’m Not A Supermodel, But I Understand The Allure Of The “Non-Invasive” Cosmetic Procedure

Linda Evangelista and I share two things: our age, and our unfortunate experiences with “non-invasive” cosmetic procedures. I was luckier than her; mine was transient. I had a face full – and I do mean full – of fillers a decade ago, in my early forties. Touted as a “liquid facelift”, the aesthetician promised, “Yes, yes, it’ll sort your jowls out”. She injected my face 12 times. I left red and regretful, sore and feeling sick. It made no long-term – nor even significant short-term – difference. For months I could feel nodules of hardened filler beneath my skin. “Use an electric toothbrush to massage them out,” the aesthetician told me sharply, when I complained.
SKIN CARE・14 DAYS AGO

It’s been a while since we’ve seen Tom Cruise on American soil, he’s been busy filming Mission: Impossible 7 overseas for several years. So when we saw him at the baseball game, up close and personal, in San Francisco on Saturday, he was almost unrecognizable to many fans. His face looked different?
SAN FRANCISCO, CA・13 DAYS AGO
HOLAUSA

Joan Collins has something to say about the Kardashian sisters! The legendary star claims the famous family have undergone “an awful lot of surgery.”. The 88-year-old actress who is best known for her iconic role in Dynasty, is giving fans some of her uncensored thoughts in her new memoir My Unapologetic Diaries, including secrets from her former co-stars and what she thinks about some of the most well-known Hollywood stars.
BEAUTY & FASHION・21 DAYS AGO
realitytitbit.com

90 Day Fiancé is a show unlike any other. After launching in 2014, the TLC show has now got multiple spin-offs and its cast members are recognised all over the world. The TLC show is onto its eighth season in 2021 but viewers still want the lowdown on previous cast members. Fans of the show were introduced to 90 Day Fiancé: The Other Way season 2 couple Ariela Weinberg and Biniyam Shibre in 2020.
CELEBRITIES・20 HOURS AGO
shefinds

Khloe Kardashian’s beauty transformation has been well documented across the internet, and the reality star and ‘Good American’ owner only continues to evolve as she posted an ad video to Instagram looking different than usual early this week. The new look comes after it was alleged that Kardashian was not in attendance at the Met Gala for reportedly being “too C-list,” although many of her family members were there.
CELEBRITIES・23 DAYS AGO

Marie Osmond thinks the time is right for cosmetic surgery

The 61-year-old singer has been trying to stave off the ageing process with non-invasive techniques, passed on to her by American sitcom queen Lucille Ball, but now she is in her 60s Marie thinks it could be time to take the plunge and go under the knife to stay looking her best.
BEAUTY & FASHION・13 DAYS AGO
Daily Mail

Khloe Kardashian has diamond rings BACK on her left wedding finger

Khloe Kardashian was flashing a lot of Monday evening as she headed to sister Kylie Jenner's Nightmare On Elm Street makeup launch dinner at her lavish mansion. The 37-year-old Revenge Body host's curves looked sensational in a skintight Chanel jumpsuit in black with white Cs. But the mother-of-one was showing...
CELEBRITIES・13 DAYS AGO
Us Weekly

She’s a survivor. Amy Schumer shared an update a week after her uterus was surgically removed. “I’m feeling stronger and thrilled about life,” the comedian, 40, shared via Instagram on Sunday, September 26. Her doctor walked her through everything they found in surgery. Of the 30 specimens that were taken...
CELEBRITIES・29 DAYS AGO
Us Weekly

Brushing off the backlash. Ice-T was not fazed by criticism of his 5-year-old daughter Chanel’s acrylic nails. “Rule one on the internet: Do not pay attention to anything anyone says on the internet,” the Law & Order: SVU star, 63, said during a Friday, October 1, appearance on The View when asked about the parenting police. “Worry about the people that walk up to you and say things in your real life. Those are the people you should be concerned with. The internet is the world. It’s the world talking, so I don’t pay attention.”
CELEBRITIES・24 DAYS AGO
HollywoodLife

Khloe Kardashian and mom Kris Jenner looked glam AF in West Hollywood as cameras followed close by for their upcoming Hulu show. It maybe curtains for Keeping Up With the Kardashians, but the cameras keep rolling on the Kar-Jenner clan! On Sept. 30, Khloe Kardashian and mom Kris Jenner were spotted out and about in West Hollywood, California, leaving a furniture store and looking stylish as ever.
WEST HOLLYWOOD, CA・25 DAYS AGO
Life and Style Weekly

Kourtney Kardashian shared a glimpse at her family group chat, which includes ex Scott Disick, hours after announcing her engagement to new fiancé Travis Barker. “Colossians 4:5-6,” read a message shared by Kris Jenner in the “Entire OG Family” exchange that Kourtney, 42, posted a screenshot of via Instagram Stories on Tuesday, October 19, following the Blink-182 rocker’s romantic proposal. “Be wise in the way you act toward others. Make the most of every opportunity. Let the words you speak always be full of grace and kindness. Learn how to make your words what people want to hear. Then you will know how to answer everyone and bring out the best in them.”
CELEBRITIES・5 DAYS AGO
Popculture

Travis Barker's rocker style is rubbing off on Kourtney Kardashian's 9-year-old daughter! The Keeping Up With the Kardashians alum took to Instagram Sunday to share photos of Penelope rocking an all-black look with smoky eye makeup and long black wig. Kardashian captioned the attitude-filled shots with a spider, bat and black heart emoji, and her beau made sure to show his approval in the comments.
CELEBRITIES・21 DAYS AGO
NME

BBC Radio 1 DJ Adele Roberts has revealed that she’s been diagnosed with bowel cancer, and will begin treatment today (October 25). The 42-year-old DJ, who hosts the station’s weekend breakfast show, shared the news in an Instagram post, saying she was diagnosed at the start of October and that the outlook is “positive”.
CELEBRITIES・22 HOURS AGO