Is there a fire in LA? Northern California fire smoke moves down to SoCal, prompting questions 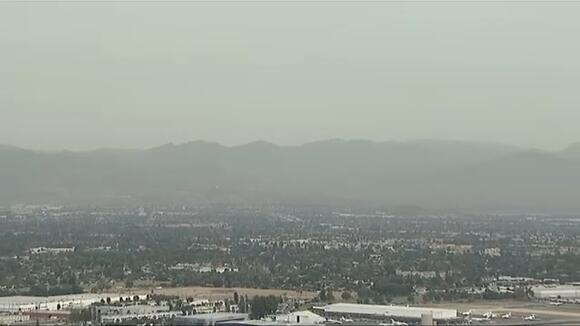 A layer of smoke that descended over the greater Los Angeles region prompted questions from residents Thursday, but officials said it was not due to any local fires. The Los Angeles Fire Department said that the smoke entering the L.A. basin, which could be widely seen across Southern California, "is from distant wildfires in North and Central California." The department added that residents should not call 911 to report the smoke.

A layer of smoke that descended over the greater Los Angeles region prompted questions from residents Thursday, but officials said it was not due to any local fires.

The South Coast Air Quality Management District reminded residents to be aware of the air quality outdoors and issued a special air quality advisory in effect through Friday. "While the heaviest smoke will be present in the upper atmosphere across the region, impacts on surface air quality are expected in the San Bernardino, San Gabriel, and San Jacinto mountains," the agency said, adding that the air quality index may reach unhealthy levels for sensitive groups. Having trouble viewing? click here to view the full map in a new window The AQMD advised residents to close windows and avoid any strenuous physical activity outdoors. A brush fire erupted in San Bernardino Wednesday near the 215 Freeway, prompting evacuation orders, but firefighters quickly stopped its spread. RELATED VIDEO | How wildfire smoke can impact your health

Smoke from wildfires could cause health problems for some people.

DEVELOPING: We will add more details to this report as they become available.

The Sky is Horrible. I can't breathe outside. I am confused if this is all jist Smoke, or Clouds and Smoke. I am in the High Desert. Very weird for sure.

It’s terrible, we need better skills to lock down the fire ASAP . No more light up more fire, that’s terrible skill . Unbelievable! It’s gone too far . Sad and shame to see this happening over and over and year after years ……

Hell's descending on California, 😂Draining the lakes even more to put out these fires is affecting the water shortage in California...👍

In Santa Barbara County, an evacuation order was issued for parts of the Alisal Fire burn scar due to potential debris flow.
VENTURA COUNTY, CA・2 HOURS AGO
ABC7

A massive storm barreled toward Southern California on Monday after flooding highways, toppling trees, cutting power and causing rock slides and mud flows in areas burned bare by wildfires across the northern half of the state.
CALIFORNIA STATE・1 HOUR AGO
ABC7

The full closure of a 2.5-mile stretch of the 101 Freeway east of downtown Los Angeles continued as part of a project to replace the Sixth Street Viaduct.
LOS ANGELES, CA・1 DAY AGO

Southern California will see the first big storm of the season Monday, which may impact the morning commute but the bulk of the rain will arrive by the afternoon.
LOS ANGELES, CA・1 HOUR AGO
ABC7

Wildfires don't just happen in the wild. They can happen in the middle of cities, too. And they are terrifying. Take a look back at the firestorm that tore through the East Bay Hills, streaming now on the ABC7 Los Angeles app.
ACCIDENTS・2 DAYS AGO
ABC7

A magnitude 3.6 earthquake struck the Maywood area on Sunday morning, according to the U.S. Geological Survey.
MAYWOOD, CA・1 DAY AGO

"It's not as rare as you think," an aviation expert said of the fact that no one died.
HOUSTON, TX・21 HOURS AGO
ABC7

The vigil will be held on Sunday at the IATSE Local 80 headquarters on Olive Avenue and will honor Halyna Hutchins and her accomplishments.
BURBANK, CA・16 HOURS AGO
ABC7

A standoff involving sheriff's deputies and an armed person in a recreational vehicle prompted the hourslong closure of Pacific Coast Highway.
MALIBU, CA・1 DAY AGO
ABC7

Anchored off the Southern California coast, many people see a record-setting backlog of container ships. But others an see opportunity for low-income housing.
LOS ANGELES COUNTY, CA・2 DAYS AGO
ABC7

A woman was killed and seven people were injured when a speeding SUV crashed into a pop-up Halloween store near the Van Nuys Airport Sunday night, officials say.
LOS ANGELES, CA・10 HOURS AGO
ABC7

People in government offices, businesses and schools across Southern California stopped everything for a minute Thursday to "drop, cover and hold on" during a statewide earthquake drill.
CALIFORNIA STATE・3 DAYS AGO
ABC7

Three bears were seen leisurely strolling through a residential neighborhood in Arcadia, approaching several homes before wandering out of sight.
ARCADIA, CA・2 DAYS AGO