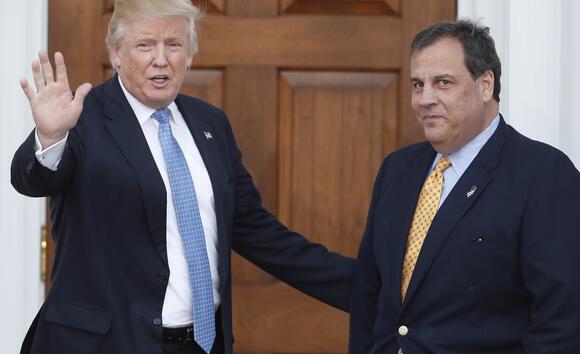 “I think it would be better if he accepted the results of the 2020 election. And I think that would be better for the country. There hasn't been any type of substantive evidence that has come forward,” the former two-term governor and Republican 2024 contender said during a virtual appearance at the annual Texas Tribune Festival.

“I wanted him to win, I voted for him both times,” Christie added. “But in the post-election period, he put himself ahead of the country. And I think anybody who's been honored enough to be president of United States has to understand that when the American people give you that honor, the country has to come first.”

Christie, 59, is more than simply a Trump voter.

The former governor has been friends with Trump for years and endorsed then-candidate Trump at a critical juncture of the 2016 GOP primary campaign after his own White House bid fell flat. For the next four-plus years, Christie functioned as a close, informal adviser to Trump on political and policy matters. But since Trump lost to Biden last November, Christie has been sharply critical of his old friend’s claims that the election was stolen.

'PERFECT STORM': IOWA COULD BE BELLWETHER FOR DEMOCRATIC PROBLEMS IF BIDEN FAILS TO RECOVER

Indeed, Christie is among the few prominent Republicans to give Trump a public tongue-lashing on a topic Trump continues to flog eight months after exiting the White House. The former governor addressed the matter head-on, again, during a conversation at the Texas Tribune Festival that aired Thursday. Trump was at it again the same day, demanding that Texas Gov. Greg Abbott audit the 2020 election results in the Lone Star State despite having won there easily.

“I think first step that he needs to [take] to help the country, is to say he accepts the results of the 2020 election,” Christie said. “He could be angry about it, he could say there were certain things about it that weren't fair, that's all a fair game. But to say it was rigged and it was stolen, there's just no evidence to that. And, what is it, 60 or 65 courts across the country, including courts that have been run by Trump nominees, have all rejected that.”

"I would just say that I think that these conspiracy theories and not just these, but others that have been out there, just are not good for our party,” Christie continued. “They distract us while Joe Biden is in the midst of trying to change this country in a way that could be irreversible politically. We're not paying attention, as much attention to that as we should, and we're paying attention to this other stuff.”

Christie, 59, left the governor’s mansion nearly four years ago. He sought the Republican presidential nomination in 2016, ending his campaign after a disappointing finish in the New Hampshire primary. But Christie, who recently signed on to aid GOP redistricting efforts, is mulling another run for the White House in 2024. Some Republicans in Christie’s position have said they will not run for president if Trump mounts a third bid for commander in chief.

The former governor previously said Trump seeking the party’s 2024 presidential nomination would not automatically preclude him from doing the same. Christie reiterated those comments during the Texas Tribune Festival and suggested he would not shy away from hammering Trump for his handling of the post-election period and his behavior since if both find themselves running against each other.

“If I run, I'll certainly have something to say about it, but we'll wait to see if I run, and if I do, I think you know me well enough to know that I won't hold back,” Christie said, adding, “I don't think you make a decision about whether to run for president or not based upon what someone else does.”

I Alone Can Fix It: Say Donald J. Trump.. Me, myself and.. I... I'm the only guy... you know the old saying if you want something done right don't do it yourself come get me... the Donald... He is perfect in Death of a Salesman Because it.. addresses loss of identity, and a man baby's.. Inability to accept change within himself and Grow up... society... Not going to put up with his nonsense.. The play is a montage of memories, dreams, Tantrums, tears, confrontations, and arguments, all of which make up the last 4 years of an apprentice who should have never become a president!!!

Sounds almost like the guy who shut down a bridge putting himself first. Or the guy who closed miles of beach in New Jersey so he and his family could have a day in the sun.

Christy sure was Trump’s luggage boy for quite some time. It’s clearly becoming obvious that the Repugnant Party is starting to eat one another alive with dull knives. Thank God

Former President Donald Trump has given every indication he is running for president again short of formally announcing it, and the party is lining up dutifully behind him. While this comes as no surprise — Trump turned out new voters and is a fundraising machine — he also lost the last election, both in the electoral college and by roughly seven million popular votes.
PRESIDENTIAL ELECTION・18 HOURS AGO
WashingtonExaminer

The St. Louis Post-Dispatch editorial board said the "shameful roster" is "once again running interference for a lawless ex-president."
PRESIDENTIAL ELECTION・1 DAY AGO

Eric Trump mocked America's top general for running "sensitivity training" for the military while China tested nuclear-capable hypersonic missiles, at a conference attended by throngs of QAnon supporters and vaccine conspiracy theorists. The son of the former president gave one of the strongest hints yet that Donald Trump was plotting...
POTUS・7 HOURS AGO
Newsweek

"If we decide to pull an insurrection, you're gonna know it," David Clarke warned.
PRESIDENTIAL ELECTION・7 HOURS AGO
Business Insider

Senate Democrats confirmed someone who is arguably President Joe Biden’s worst nominee. You can thank former President Donald Trump for it. Catherine Lhamon, Biden’s nominee for the Department of Education’s Office for Civil Rights, was confirmed by a 51-50 vote, with every Democratic senator voting to confirm her and Vice President Kamala Harris breaking the tie.
PRESIDENTIAL ELECTION・2 DAYS AGO

Sen. Susan Collins on Friday listed a handful of Republicans she would support over former President Donald Trump for the party’s 2024 presidential nomination. But she stopped short of saying she wouldn’t support Trump if he were the party’s nominee. “We have many Republicans that I think would be great...
PRESIDENTIAL ELECTION・2 DAYS AGO
News 12

Democratic Senators Kyrsten Sinema and Joe Manchin are dominating Capitol Hill. Given the 50-50 split in the Senate, Democrats can’t afford to lose a single vote on the budget reconciliation bill — and Sinema and Manchin are using that leverage to force huge concessions from the Biden administration. Both Sinema and Manchin are insisting on paring down the overall cost […]
PRESIDENTIAL ELECTION・1 DAY AGO

WASHINGTON – Ken Paxton, the Texas attorney general who as chair of “Lawyers for Trump” tried to overturn Joe Biden’s election in court, said Thursday that he not only still believes Trump won but that Biden’s presidency amounts to an “overthrow.”. He made the comment in El Paso, during a...
TEXAS STATE・2 DAYS AGO
WashingtonExaminer

President Joe Biden made a number of false or misleading claims at a town hall event in Baltimore on Thursday as he attempted to sell his party's spending legislation.
BALTIMORE, MD・2 DAYS AGO
Washington Post

They called it the “command center,” a set of rooms and suites in the posh Willard hotel a block from the White House where some of President Donald Trump’s most loyal lieutenants were working day and night with one goal in mind: overturning the results of the 2020 election. The...
PRESIDENTIAL ELECTION・1 DAY AGO
AFP

Obama hits the stump in US battleground Virginia

Former US president Barack Obama was due to campaign Saturday in a neck-and-neck state election touted as a bellwether of public opinion on Joe Biden's first year in the White House. "Look, there's a reason President Barack Obama is in Virginia right now.
VIRGINIA STATE・1 DAY AGO

Gutfeld says Biden administration operating like 'a decapitated vessel on a tricycle:' 'There's no head'

"The Five" co-host Greg Gutfeld offered up a Halloween analogy on the show Thursday to describe the Biden administration's tepid response to skyrocketing inflation and the ongoing supply chain crisis. "The White House is coming to Halloween as the headless horseman because the administration has no head. There’s no leadership,"...
PRESIDENTIAL ELECTION・2 DAYS AGO
Deseret News

Elections are about the future, so why are so many Republicans making next year’s midterms about the past?. In races across the country, top Republican candidates are looking back to 2020 by either making “election integrity” a key part of their campaigns, supporting partisan audits even though earlier state-mandated audits found no evidence of widespread fraud, or questioning and in some cases denying the results of last year’s election.
PRESIDENTIAL ELECTION・1 DAY AGO
floridapolitics.com

With Trump, The numbers are different. If former President Donald Trump doesn’t run again in 2024, Gov. Ron DeSantis is the favorite. That’s one read of a poll dropped Friday. That 24% puts DeSantis ahead of Donald Trump Jr., who was preferred by 18% of those polled. Former Vice President...
PRESIDENTIAL ELECTION・2 DAYS AGO
WashingtonExaminer

RICHMOND, Virginia — Former President Barack Obama on Saturday implored Virginians to vote for Democratic gubernatorial candidate Terry McAuliffe, whom he praised as having the grit, leadership, and "track record of accomplishment" to lead the state.
RICHMOND, VA・1 DAY AGO