By Sam Moore
The Independent
29 days ago 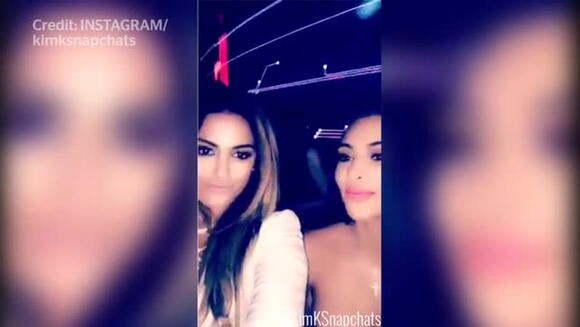 Will & Grace star, Debra Messing is confused why Kim Kardashian is a host on the next season of Saturday Night Live .

Kardashian is scheduled to host the second episode of the sketch show’s 47th season with Halsey as the musical guest, but Messing is stumped as to why the reality star has been chosen.

Posting on Twitter, Messing said: “Why Kim Kardashian? I mean, I know she is a cultural icon, but SNL has hosts, generally, who are performers who are there to promote a film, TV show, or album launch. Am I missing something?”

Hosts of the show are usually actors, musicians or comedians who deliver a stand-up routine at the beginning of the episode and also take part in sketches along with the rest of the regular cast.

SNL was previously criticised for having then-presidential candidate, Donald Trump, as a host in 2015.

Whilst Keeping up with the Kardashians ended earlier this year, Kim and the rest of the family announced a deal with streaming service, Hulu, to deliver programming and content.

In April, Kim’s mother, Kris Jenner told The Wall Street Journal that they hadn’t “really nailed down the exact format yet” regarding a future show.

Kim Kardashian also told Ellen DeGeneres on her afternoon talk show that she hoped her sister Kourtney’s new boyfriend, Blink 182 drummer, Travis Barker, would join them on the new show.

Khloe Kardashian and mom Kris Jenner looked glam AF in West Hollywood as cameras followed close by for their upcoming Hulu show. It maybe curtains for Keeping Up With the Kardashians, but the cameras keep rolling on the Kar-Jenner clan! On Sept. 30, Khloe Kardashian and mom Kris Jenner were spotted out and about in West Hollywood, California, leaving a furniture store and looking stylish as ever.
WEST HOLLYWOOD, CA・22 DAYS AGO
shefinds

Khloe Kardashian’s beauty transformation has been well documented across the internet, and the reality star and ‘Good American’ owner only continues to evolve as she posted an ad video to Instagram looking different than usual early this week. The new look comes after it was alleged that Kardashian was not in attendance at the Met Gala for reportedly being “too C-list,” although many of her family members were there.
CELEBRITIES・20 DAYS AGO
HollywoodLife

Kendall Jenner stunned in a slinky orange and yellow dress as she headed to an event in New York City for her 818 tequila brand. Kendall Jenner has stepped out in a long, sheer dress for a night on the town in New York City. The supermodel was in the Big Apple for an 818 tequila event on October 14, and was spotted leaving her hotel in a slinky orange, yellow and black dress which featured long sleeves. The 25-year-old supermodel paired her colorful, mesh ensemble with clear heels, and a burgundy red purse, as she styled her raven tresses in a sleek blowout.
NEW YORK CITY, NY・7 DAYS AGO
extratv

Rob Kardashian just made a rare appearance on Instagram!. On Monday, his sister Kim Kardashian shared a few photos from a family dinner that included Rob, who looked happy and healthy. The first pic featured Kourtney Kardashian with her beau Travis Barker, and the second showed siblings Khloé Kardashian and...
CELEBRITIES・17 DAYS AGO

After Kourtney Kardashian And Travis Barker Got Engaged, Her Sisters Outed Her Huge Rock

In what is probably the most inevitable news of the last year, Kourtney Kardashian and Travis Barker are engaged. The two lovebirds have been engaging in public PDA for months and have been seemingly smitten with one another. The whirlwind romance has now culminated in an engagement, and it’s one that Kourtney Kardashian shared herself. What she didn’t share was the huge bling Travis Barker gave her. The good news? Kim Kardashian and Kylie Jenner are here to assist with that.
CELEBRITIES・4 DAYS AGO
The Hollywood Gossip

In case you somehow weren't aware, Travis Barker and Kourtney Kardashian are really, really into each other. Like, for their sake, we're kind of hoping this is just a honeymoon phase, because if they sustain this level of mutual obsession they might wind up in the emergency room for severe friction burns on their junk.
CELEBRITIES・23 DAYS AGO
Footwear News

Kim Kardashian hosted “Saturday Night Live” for the first time ever today and her performance did not disappoint. The reality television star took the stage in head-to-toe pink velvet, featuring a high neck and pumps. In her opening monologue, Kardashian poked fun at her family, Kanye West and more. Kim Kardashian West’s Monologue! pic.twitter.com/t60b6ZC6cl — Saturday Night Live – SNL (@nbcsnl) October 10, 2021 Earlier in the day she was spotted in a puffy pink coat and glitter boots on her way to NBC studios. Before hosting this weekend’s episode, the media mogul headed to rehearsals on Wednesday in eye-catching, all-black attire. The ensemble...
CELEBRITIES・12 DAYS AGO
TVShowsAce

Khloe Kardashian Rejected From TV For Being Too ‘Racy’

Khloe Kardashian recently did an ad for Good American, her clothing brand, and she took her top off for it. Apparently, it was too racy for TV. Anyone who follows Khloe Kardashian on Instagram knows that she recently posted a topless video of herself. The former Keeping up with the Kardashian star was rolling around in simply a pair of jeans. She held a top/her arm over her chest so that she didn’t actually show anything “bad.”
CELEBRITIES・22 DAYS AGO

How Much Is Kourtney Kardashian Worth?

Kourtney Kardashian might just be the "most interesting sister to look at" after images surfaced of her engagement to Blink-182 drummer Travis Barker. Explore: Forbes List Claims a New Billionaire...
CELEBRITIES・4 DAYS AGO
ETOnline.com

Travis Barker's Kids React to His Engagement to Kourtney Kardashian: 'So Happy for You Guys'

Travis Barker's kids are thrilled for their dad following his engagement to Kourtney Kardashian. The Blink-182 drummer, 45, shares stepdaughter Atiana, 22, son Landon, 17, and daughter Alabama, 15, with ex-wife Shanna Moakler, whom he was married to from 2004 to 2008. All three of the children posted on Instagram following the Sunday evening engagement.
RELATIONSHIPS・4 DAYS AGO
HollywoodLife

Debra Messing admitted she didn’t ‘intend’ to ‘troll’ Kim Kardashian after sharing a tweet that asked why she was chosen to host ‘SNL,’ in a new talk show interview. Debra Messing, 53, is speaking out after she wrote a controversial tweet about Kim Kardashian, 40, and her hosting debut on...
CELEBRITIES・2 DAYS AGO

Click here to read the full article. Queen of “Saturday Night Live” Kim Kardashian West proved once again she’s full of surprises — and uses fashion smartly. Here, some of her best looks. Over the years Kardashian West has become a very good fashion editor. The SNL week was all about hot pink bodysuits by Balenciaga. In this case, the Big Bird-style cape adds a huge amount of glamour and a touch of fun.More from WWDHalloween 2021 Pop Culture-inspired CostumesWedding Tux Shopping with Jesse McCartneyJurnee Smollett's Photo Diary from the Dior Show For her critically acclaimed opening, Kardashian West opted for a...
BEAUTY & FASHION・7 DAYS AGO
E! News

Watch: Inside Kim Kardashian's "Lit" Birthday Party Thrown by Her Kids. The Kardashian-Jenner girls are known for their unforgettable parties—and that tradition has already been passed down to the next generation. Kim Kardashian turned 41 on Thursday, Oct. 21 and although the SKIMS founder received plenty of sweet tributes and...
CELEBRITIES・14 HOURS AGO
TVShowsAce

Kim Kardashian is in a rocky relationship with her estranged husband Kanye West. Fans wondered whether the two are getting back together. Earlier this year, she filed the divorce papers proving that she means business. However, she also hinted that she still supports the rapper, no matter their relationship status.
CELEBRITIES・3 HOURS AGO
Page Six

Emmy winner Debra Messing is still dealing with the fallout from questioning Kim Kardashian’s “SNL”-worthiness. The notoriously outspoken actress, 53, has apologized for a September tweet asking why Kardashian, 40, was chosen to host “Saturday Night Live.” Messing appeared on “Tamron Hall” Wednesday to publicly apologize and discuss the kerfuffle and her reaction after watching the show.
CELEBRITIES・2 DAYS AGO
Footwear News

The Los Angeles Lakers are beloved and known for bringing out plenty of famous faces, from Jack Nicholson and Larry David to Kim Kardashian, Courteney Cox and Lizzo. Celebrities have been sitting courtside for years and it’s not uncommon to see a Hollywood star pop up on the jumbotron and give a wave to the crowd. Most recently, Adele was spotted in the coveted seats sporting a head-turning chocolate look with her new boyfriend Rich Paul. Rapper Saweetie, clad in a bright green jacket, was seen talking to the singer. Ahead of COVID restrictions in early March 2020, Michale B. Jordan and...
NBA・2 DAYS AGO
CinemaBlend

If you're on Twitter as much as the average CinemaBlend writer, you may remember the online drama that emerged when Will and Grace star Debra Messing called out reality television star Kim Kardashian for taking a Saturday Night Live hosting gig. With Kim Kardashian’s SNL episode only a few days away, the reality star and social media mogul appeared in a series of promos to address whether or not she should actually be hosting the show. So, how does Kim Kardashian actually feel about the job?
BEAUTY & FASHION・14 DAYS AGO
Ok Magazine

A day after Kanye West listed one of his Wyoming ranches, he also said goodbye to the Hidden Hills home he had shared with Kim Kardashian. New documents filed in the Los Angeles County Court Tuesday show that Kim will get the $60 million house they’d built together. Sources told...
TROUBLE RELATIONSHIP・10 DAYS AGO