By Via AP news wire
The Independent
24 days ago 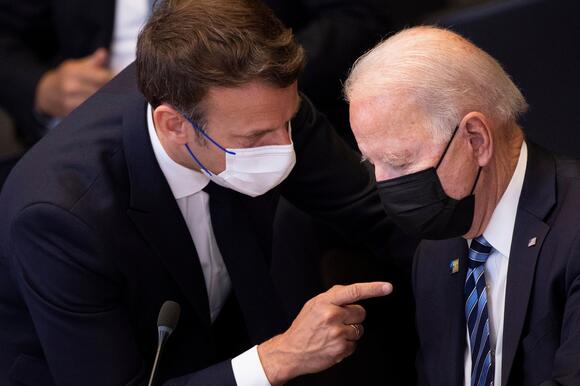 This week’s phone call between President Joe Biden and French President Emmanuel Macron may have soothed some of the incandescent rage with which France erupted over its exclusion from a new Indo-Pacific defense initiative, but the anger and resentment remain clear.

After meeting Thursday with Secretary of State Antony Blinken on the sidelines of the U.N. General Assembly, French Foreign Minister Jean-Yves Le Drian pointedly referred to the situation as a “crisis” that will take time and U.S. action to overcome.

As part of the defense pact, Australia will cancel a multibillion-dollar contract to buy diesel-electric French submarines and acquire U.S. nuclear-powered vessels instead.

According to Le Drian, he and Blinken discussed the “terms and topics to be dealt with in an in-depth consultation process between the two countries aimed at restoring trust.”

Le Drian "affirmed that a first step had been taken with the call between the two presidents but noted that it would take time to end the crisis between our two countries and would require actions,” according to a statement from the French foreign ministry.

That’s even after Macron told Biden he had decided to send his country’s ambassador — recalled to Paris in an unprecedented move at the height of the spat — back to Washington.

Seeking rapprochement with America’s oldest ally appears not to come easily to the Biden administration, which has stopped short of apologizing for excluding France from its Indo-Pacific arrangement with Britain and Australia and seems intent on powering through the trouble.

While Le Drian lingered on the hurt and damage done to the relationship, the State Department's account of the meeting gave it nary a mention. Nor did it mention "trust."

The two men “spoke about plans for in-depth bilateral consultations on issues of strategic importance," department spokesman Ned Price said in a statement. "They discussed the EU Strategy for Cooperation in the Indo-Pacific, which the United States welcomes, and the need for close cooperation with France and other European allies and partners active in the region.”

Putin told the CNBC reporter Hadley Gamble that she didn't seem to understand him when she asked him about a Russia-Europe standoff over gas supply.
GAS PRICE・3 DAYS AGO
International Business Times

As war threat looms over the Taiwan strait, Russian President Vladimir Putin has said that China "does not need to use force" to take over Taiwan. Putin's comments come even as China ramps up a display of power over Taiwan by sending warplanes into the latter's buffer zone. The Russian...
POLITICS・4 DAYS AGO
Washington Post

Robert D. Kaplan holds the Robert Strausz-Hupé Chair in Geopolitics at the Foreign Policy Research Institute. He is the author of “Monsoon: The Indian Ocean and the Future of American Power,” and “Asia’s Cauldron: The South China Sea and the End of a Stable Pacific.”. Culture and tradition matter. The...
FOREIGN POLICY・26 DAYS AGO
Fox News

White House Climate Envoy John Kerry went viral on Tuesday after telling French television that President Biden was unaware of the spat between the U.S. and France as it fueled last month. During a Monday interview with BFMTV, Kerry attempted to smooth over the international dustup after France expressed it...
POTUS・12 DAYS AGO

The Global Times warned Taiwan that the U.S. won't "fight to the death" over Taiwan, but China is prepared to wage the battle.
FOREIGN POLICY・3 DAYS AGO
Defense One

Is This the Next US Military Base in Europe?

CAMP HERKUS, Lithuania — American soldiers have found gracious hosts in Lithuania. At this remote base, which opened in August and is now the temporary home of hundreds of American troops, government officials excitedly showed off the new 7-million-euro facility, which includes a gym stocked with state-of-the art treadmills and weight racks, rubber-turf basketball courts surrounded by container housing stuffed with bunk beds and gear, a PX selling cigarettes and candy, and a game hall where soldiers were playing first-person-shooter video games.
MILITARY・15 DAYS AGO
Business Insider

The 2015 migrant crisis pushed the EU to its limits, and it now appears to be preparing to prevent a repeat after the US withdrawal from Afghanistan.
FOREIGN POLICY・3 DAYS AGO
The Guardian

There is growing pressure on the new Aukus partners to scrap plans to use weapons-grade uranium on submarines. A group of former US officials and experts has written to the US president, Joe Biden, warning the deal could threaten US national security by encouraging hostile nations to obtain highly enriched uranium (HEU).
MILITARY・10 DAYS AGO

PARIS, Sept 28 (Reuters) - Europe needs to stop being naive when it comes to defending its interests and build its own military capacity, French President Emmanuel Macron said on Tuesday after Greece sealed a deal for French frigates worth about 3 billion euros ($3.51 billion). France was plunged into...
POLITICS・20 DAYS AGO
The Independent

Russia accused the US Navy of attempting to enter its territorial waters during joint military drills with China in the Sea of Japan before it was “turned back”.The Russian Defence Ministry released video footage it says showed the USS Chafee up close with anti-submarine vessel Admiral Tributs, which radioed a warning to the US destroyer that it was “in an area closed to navigation due to exercises with artillery fire,” according to the Interfax news agency, reported by Reuters.The Russian defence ministry summoned the US military attache over the “unprofessional actions” of the USS Chafee, the RIA news agency...
MILITARY・2 DAYS AGO
Insider

To work, Italian employees must have a "Green Pass," which shows proof of vaccination, a negative COVID-19 test, or recent recovery from COVID-19.
PROTESTS・1 DAY AGO
Newsweek

"To take a photo with the product of another country is no honor," Iranian Revolutionary Guard deputy commander-in-chief General Ali Fadavi said.
WORLD・10 DAYS AGO

Former Secretary of State Mike Pompeo said President Biden's foreign policy "fails to understand" the "harsh reality" of good versus evil, warning, in an interview with Fox News, that without considering the "ramifications" of his administration's actions around the globe, "America will be diminished." Fox News spoke with the former...
POTUS・3 DAYS AGO
Military News Editor

The U.S. Navy has rejected claims that they tried to enter "Russian territorial waters in the Sea of Japan during Russian-Chinese naval drills on October 15th." "The Russian Defense Ministry's claim about the interaction between our two Navy ships is false," stated U.S. Navy's Pacific Fleet headquarters in a statement. "U.S. destroyer, the USS Chafee, was conducting routine operations in international water in the Sea of Japan on October 15 when a Russian Udaloy-class destroyer came within about 60 meters of it."
16 HOURS AGO
Washington Examiner

Germany appears set to abandon its promise to meet the 2%-of-GDP NATO minimum target for defense spending. Europe's largest economy and most influential voice in the European Union, Germany has long neglected defense spending. After years of saying it was taking significant steps toward the 2% target, German defense spending remains stuck at about 1.3% of GDP. It doesn't look like things are going to get any better in the coming years.
POLITICS・2 DAYS AGO
AFP

A bitter transatlantic rift is over, the European Union's top diplomat declared Friday, a month after France was infuriated with the United States over losing a massive submarine contract in Australia. France last month recalled its ambassadors, accusing the United States of deceit and Australia of backstabbing, after Canberra scrapped a multi-billion-dollar contract for French conventional submarines.
MILITARY・2 DAYS AGO

France says row with Washington over submarines still not resolved

PARIS (Reuters) – A dispute between Paris and Washington over Australia’s decision to ditch a submarine procurement contract remains serious and unresolved, French Foreign Minister Jean-Yves Le Drian said on Wednesday, despite what he said were substantive talks in Paris with the top U.S. diplomat. The transatlantic row was triggered...
WASHINGTON STATE・11 DAYS AGO
The Independent

Poles protest pushbacks of migrants at border with Belarus

Thousands of protesters marched Sunday in two Polish cities in solidarity with migrants and asylum-seekers at the Poland-Belarus border who have been pushed back by Polish authorities.Several thousand people marched in Warsaw and others protested in Krakow under the slogan “Stop torture at the border." Marchers accused Polish authorities of cruel behavior for pushing the migrants back and for imposing a state of emergency at the border that has prevented human rights workers from going there to aid people.“How many bodies lie in the forest?” read one sign in Warsaw, referring to several deaths that have occurred in the...
PROTESTS・22 HOURS AGO
US News and World Report

PARIS (Reuters) - French President Emmanuel Macron will tell his European peers the AUKUS crisis could be an opportunity to make the case to the United States that the European Union can play a strategic role in the Indo-Pacific, French officials said on Monday. Australia's decision to cancel a big...
POLITICS・13 DAYS AGO
nsjonline.com

US tries to make nice with France after Australia sub snub

WASHINGTON, D.C. — Secretary of State Antony Blinken will visit France this week as the Biden administration tries to smooth over hurt feelings and potentially more lasting damage caused by its exclusion of America’s oldest ally from a new Indo-Pacific security initiative, the State Department said. The department said Blinken...
WORLD・13 DAYS AGO