By Jaime Rodriguez
GoldDerby
24 days ago 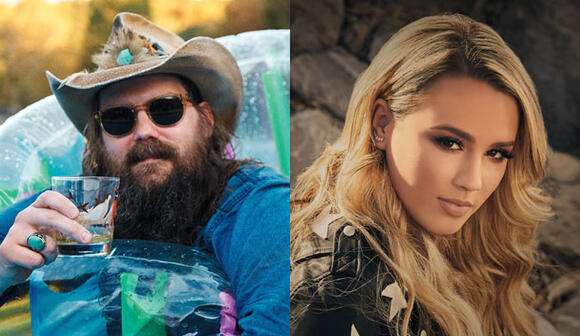 The 2021 CMA Awards are on November 10, honoring the best in country music. So as we anticipate one of the Nashville’s biggest nights, let’s analyze the album, single, song, and music video categories to see which country superstars might get a taste of CMA glory.

Album of the Year

This award will likely go to Chris Stapleton ’s “Starting Over.” He is a previous category winner, winning for both “Traveller” (2015) and “From A Room, Volume 1” (2017). “Starting Over” was also met with great reviews and notched two country hits, including the title track, which reached the top 30 on the Billboard Hot 100. Stapleton’s only competition here will be Morgan Wallen ’s “Dangerous: The Double Album,” which could’ve won if it weren’t for the whole controversy surrounding Wallen . Even though Wallen got a nom, he missed a couple other key categories he was eligible in , while Stapleton got in everywhere he could have.

Besides that, Stapleton already beat Brothers Osborne ‘s “Skeleton” at the ACMs, showing the popularity of “Starting Over” in the industry, and the other two albums here (“29” by Carly Pearce and “Heart” by Eric Church ) haven’t had nearly as much prominence or success. Stapleton will likely continue his sweep into the Grammys, unless Kacey Musgraves ‘s “Star-Crossed” (which wasn’t eligible for this year’s CMAs since the deadline was June 30) upsets.

Single of the Year

This category typically goes to very big hits, so we might cross out Ashely McBryde ’s “One Night Standards” (which was a country success, but not to the extent of the other four). Furthermore, ever since 2000, only three Single of the Year winners weren’t also nominated for Song of the Year: Johnny Cash ’s “Hurt,” which wasn’t eligible since it was a cover, Lady Antebellum ’s “I Run To You,” and Florida Georgia Line ’s “Cruise.” That might rule out Chris Young and Kane Brown ’s “Famous Friends” for the win as well. That leaves us with “The Good Ones” by Gabby Barrett , “Starting Over” by Stapleton, and “Hell of a View” by Church. I will play it safe and go with Barrett, since her song is the biggest hit nominated, and she’s now proven to voters that she won’t be a one-hit wonder after her smash last year, “I Hope.”

Song of the Year

Contrary to the prior category, songs only nominated for Song of the Year do often win (Musgraves’s “Follow Your Arrow,” Miranda Lambert ‘s “Over You,” Luke Combs ‘s “Beautiful Crazy,” Lee Brice ‘s “I Drive Your Truck”). This, on top of the fact that it’s the biggest hit nominated and by a previous category winner, will likely ensure an easy win for Combs’s “Forever After All.” Don’t underestimate Stapleton’s “Starting Over” though.

Musical Event of the Year

There’s no clear trend in this category. Sometimes they go for the biggest hit in the category (like Lil Nas X and Billy Ray Cyrus ‘s “Old Town Road”), and sometimes they simply don’t ( Glen Campbell and Willie Nelson ‘s “Funny How Times Slip Away”). And while this winner rarely matched the same category at the ACMs, it did last year when both groups picked “I Hope You’re Happy Now” by Carly Pearce and Lee Brice , so that stat is likely irrelevant now. I’m going to go with “Famous Friends,” since it’s also nominated for Single of the Year and was a major commercial success, with a possible upset being “Drunk (And I Don’t Wanna Go Home)” by Miranda Lambert and Elle King . King’s previous country hit, “Different For Girls” with Dierks Bentley , won this category in 2016.

Video of the Year

This category typically goes to videos with great cinematography and often memorable concepts or stories. So my bet here is Kelsea Ballerini and Kenny Chesney ’s “Half of My Hometown.” Its story might be relevant to a lot of voters, who likely had to move away from their hometowns to work in the industry. Brothers Osborne’s “Younger Me” also has a strong premise, but it could rankle conservative voters (it’s about coming out of the closet, set in front of the Tennessee State Capitol Building). The other video here that stands out is Dierks Bentley ’s “Gone,” which features Bentley in various TV and movie parodies as he nurses a heartbreak. That could win as well.

PREDICT the CMA winners now; change them until November 10

Make your predictions at Gold Derby now. Download our free and easy app for Apple/iPhone devices or Android (Google Play) to compete against legions of other fans plus our experts and editors for best prediction accuracy scores. See our latest prediction champs . Can you top our esteemed leaderboards next? Make your CMA predictions so that insiders can see this year’s contenders are faring in our CMA odds. You can keep changing your predictions until winners are announced. And join the discussion on this and more taking place right now with Hollywood insiders in our music forums . Read more Gold Derby entertainment news .

The CMA Awards announced part of their lineup earlier this month. That announcement got country music fans excited. Artists like Eric Church, Ashley McBryde, and Carly Pearce never disappoint. However, they just released the rest of the lineup. If the first set of performances had you excited. This one is going to blow your mind. Seriously, November 10th can’t come soon enough.
CELEBRITIES・10 HOURS AGO
ABC7 Los Angeles

Chris Stapleton was honored at the 2021 CMT Artists of the Year awards ceremony on October 13. To honor Stapleton, Boys II Men, who were joined by Pentatonix‘s Kevin Olusola, performed a rendition of the singer’s 2020 hit “Cold.”. “I don’t think that’s Chris Stapleton’s ‘Cold’ anymore,” said Stapleton after...
MUSIC・13 DAYS AGO
HollywoodLife

As one of CMT’s Artists of the Year in 2021, Gabby Barrett shined bright while attending an event to celebrate the honorees on Oct. 13. Gabby Barrett looked absolutely stunning while attending the CMT Artists of the Year event on Oct. 13 in Nashville. The blonde beauty, who was one of seven honorees at the event, walked the red carpet in a strapless black dress with an animal print. She paired the look with matching, shoulder-length gloves, and had her hair pulled back with two tendrils left hanging down to frame her face.
MUSIC・13 DAYS AGO

COUPLE GOALS! Chris and Morgane Stapleton soaked up some spotlight on Wednesday (October 13th) during the CMT’s 2021 Artist of the Year Awards. The duo was seen on the red carpet smiling cheek to cheek and enjoying a few laughs. CMT managed to capture an adorable snapshot of the Stapletons.
MUSIC・13 DAYS AGO
Taste of Country

Pop superstar Katy Perry was a guest host on The Ellen Show this week (Oct. 22), and she took the opportunity to chat with her American Idol co-judge about another upcoming gig they've got in common: Both are booked for Las Vegas residencies in the months ahead. Bryan's residency starts...
CELEBRITIES・2 DAYS AGO
Taste of Country

Chris Stapleton has pushed two scheduled shows at Nashville's Bridgestone Arena back to December, per doctor's orders. This Thursday's (Oct. 21) concert in Cincinnati is also being postponed. The news comes four days after the singer and CMA Entertainer of the Year nominee rescheduled a show for Sioux Falls, S.D....
CINCINNATI, OH・6 DAYS AGO
101.9 KELO-FM

SIOUX FALLS, S.D. (KELO.com) — Chris Stapleton has postponed his concert at the Denny Sanford PREMIER Center for tonight. He posted on social media, “To all my friends in Sioux Falls, I am sorry to let you know that I am unable to perform tonight’s show due to laryngitis. I want you all to know this wasn’t a decision we made lightly. I was hoping that my voice would improve with time today, but it has only gotten worse. We sincerely apologize to every ticket holder & hope to see you all on the rescheduled date, 11.14.2021. We love you and appreciate your understanding.”
SIOUX FALLS, SD・11 DAYS AGO

Gabby Barrett Honored, Performs “The Good Ones” At 2021 “Artists Of The Year”

As introduced by contemporary Christian icon Michael W. Smith, Gabby Barrett — as accompanied by her husband Cade Foehner on guitar, plus a pianist and violinist — performed her current soaring hit ballad, “The Good Ones,” before being honored live at the 2021 CMT Artists of the Year event. The song’s poignant lyrics about finding a mate that one is proud to call their own was highlighted by Foehner seated stage right, in the shadows of the “I Hope” vocalist.
MUSIC・14 DAYS AGO
Wide Open Country

In 2018, country music star Gabby Barrett and Cade Foehner met when they were both contestants on season 16 of American Idol. Barrett says that she liked him from the beginning and made the first move. "I had to get to know him first," the CMT Artist of the Year...
NASHVILLE, TN・14 DAYS AGO
995qyk.com

Chris Stapleton has lost his voice and has had to postpone concerts in Cinncinatti and Nashville this week after already having to postpone a concert last week in South Dakota. Chris took to his socials to share the not-so-good news. After thanking his fans for their love and support, he...
CELEBRITIES・6 DAYS AGO
Kickin Country 100.5

Just announced, Chris Stapleton is bringing his All-American Road Show to Sioux Falls! Finally we will get to see this show Saturday October 16, 2021 at The Denny Sanford Premier Center. The show was previously scheduled for August 2020. Stapleton brings a string of hits to town like Parachute, Broken...
SIOUX FALLS, SD・13 DAYS AGO

"A Film By Nancy Meyers" by Chris Stapleton and Jimmy Fallon

Adele recently did an interview of 73 questions with Vogue magazine and ended up doing like 95 questions instead. One of the last questions was “Who would be your dream duet partner? to which she replied, “Chris Stapleton, Whoa.”. While she didn’t elaborate on the would-be duet, her answer was...
MUSIC・2 DAYS AGO
WLWT 5

CINCINNATI — The Chris Stapleton concert that was scheduled for Thursday at Riverbend Music Center has been postponed. The country music star posted on Facebook Saturday that he has laryngitis and had to cancel his weekend show in Sioux Falls. Then, on Wednesday, Stapleton provided another update saying he will...
CINCINNATI, OH・7 DAYS AGO
CMT

There’s more bad news for Chris Stapleton fans. Last week Stapleton was forced to reschedule his Sioux Falls, SD, concert due to laryngitis. Unfortunately, his condition didn’t improve enough over the last few days to allow him to play this weekend’s shows, either. “I had hoped to have some good...
MUSIC・6 DAYS AGO
iHeartRadio

2021 CMA Awards: Here's Who Will Be Performing On Country's Biggest Night

Watch Gabby Barrett Perform 'Footprints on the Moon' on 'Colbert'

Gabby Barrett appeared on The Late Show to perform her song “Footprints on the Moon,” off the singer’s 2020 album Goldmine. Playing with her live band, Barrett gave the rollicking song a sense of real passion and emotional fire. Barrett released Goldmine, her debut album, last June via via Warner...
CELEBRITIES・14 HOURS AGO
eaglecountryonline.com