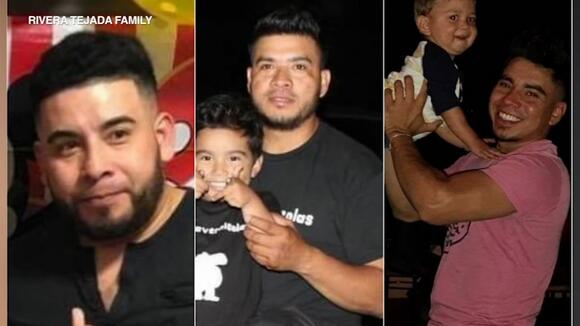 A lawsuit has been filed in the deaths of three Chicago men who were killed at Starved Rock State Park earlier this year. Inmer, Rafael and Guillermo Rivera Tejada were killed in an explosion along the Illinois River in LaSalle County in May. Several agencies responded to reports of an explosion in the area of the Route 178 bridge. When they arrived, they found the men dead due to injuries sustained from the blast, according to police. At the time of the incident, officials said the explosion was not related to the recent demolition of the old Route 178 bridge. WATCH: Drone video captures bridge implosion over Illinois River

A drone captured the planned implosion of a Utica bridge over the Illinois River Thursday.

But after months of investigations, the family now firmly believes the fatal explosion was caused by a device meant for a nearby bridge demolition that never detonated. "These men were our brothers and husbands," said Maluc Cordoba-Arce. "These men were three pillars of our family. Our children will now grow up without their dads." Cordoba-Arce, the wife of Immer Rivera Tejada, said it was supposed to be a fun trip with two brothers and a nephew. Their tight-knit Chicago family is now forever united by an immense and unnecessary loss. "Today I'm here to pursue the justice and accountability our family deserves," Cordoba-Arce said. In May, the three men of the Rivera Tejada family went fishing as they often did. But the family's attorney said what led to the fatal explosion dates back to March, when three construction and blasting companies were in charge of demolishing a nearby bridge. The family's attorney said what was left behind was unknowingly used by the men to prop up a cast iron pan to cook their fish, thinking it was just a copper pipe. "As it turns out, this copper pipe was an undetonated linear-shaped charge - an explosive device most recently used in the demolition of the Route 178 bridge less than two months earlier," said Patrick Salvi, the family's attorney. The wrongful death lawsuit claims the companies failed to control the explosive materials at all times and failed to perform an adequate post-blast inspection. "This lawsuit is filed on behalf of the family because this fatal occurrence should have never happened, very avoidable," Salvi said. Whatever the outcome is in court, there are now 7 children ages 3 to 15 left behind. All three men were fathers. "There are still days I wake up and find for a moment I forget my husband is dead," Cordoba-Arce said. "And everyday our children are reminded that their fathers are never coming back." Eyewitness News contacted each of the construction companies named in the lawsuit and has not heard back.

Some guys go out for a good day of fishing and this happens? I agree, someone should be held responsible

no criminal charges is why this happens. no responsibility or accountability anymore in america.

The guys may have gone fishing but they also were trying to work out how to use explosives. I would say these guys weren’t innocent. That’s Not S.R.S.P’s fault! Everyone knows to go in you are going at your own risk. There are trails there that are steep small and narrow.

HONOLULU (HawaiiNewsNow) - The family of a man killed by police at a Kapolei gas station two years ago has filed a wrongful death lawsuit against the Honolulu Police Department. The HPD said the shooting was justified, but the lawsuit claims police provoked the situation. “Look, our police department has...
KAPOLEI, HI・1 DAY AGO
ABC 7 Chicago

A man has died after he was shot and crashed into a building on Chicago's Northwest Side Monday morning, police said.
CHICAGO, IL・3 DAYS AGO
KXL

PORTLAND, Ore. (AP) – A lawsuit has been filed alleging that poor management at a Portland senior independent living apartment building contributed to a woman’s heat-related death during June’s unprecedented heat wave. The Oregonian/OregonLive reports the son of Charlotte Iverson filed the suit Thursday against The Heights at Columbia Knoll...
PORTLAND, OR・13 DAYS AGO
FOX8 News

The girl, Wongel Estifanos, was killed on Sept. 5 after falling from a ride at Glenwood Caverns Adventure Park in Colorado.
DENVER, NC・7 DAYS AGO

The disappearance and slaying of 19-year-old college student Miya Marcano inspired movements of activism and legal action. Marcano's family lawyer, Daryl K. Washington, said he's representing the family to ensure all possible was done for the security and search of the young woman. "Miya was failed by officials who had...
ORANGE COUNTY, FL・8 DAYS AGO
ABC 7 Chicago

UTICA – Heavy rains which dumped over 4” over parts of LaSalle County will cause some localized flooding. One area that is always one of the first to be hit, the lower parking area and boat ramps at Starved Rock, are expected to be inundated soon by the rising Illinois River. The National Weather Service predicts the river to crest at about 25’ in LaSalle.
LASALLE COUNTY, IL・2 DAYS AGO
ABC 7 Chicago

Chester Weger's attorney says DNA testing on hairs found on the victims could rule out his client as the killer.
CHICAGO, IL・41 MINUTES AGO

A man is accused of using a hammer to kill a woman who was found dead Wednesday morning at a high-end bicycle distributor in Bergen County, authorities said. Christian V. Giron, 24, was charged with murder, weapon possession and hindering his own apprehension in the slaying of 43-year-old Jeanette A. Willem, according to the Bergen County Prosecutor’s Office.
BERGEN COUNTY, NJ・17 HOURS AGO
WGN News

Man, 74, shot to death in Englewood

CHICAGO — A 74-year-old man was found shot to death in his home in Englewood. Chicago police said a family member of the man hadn’t heard from him in a while and conducted a well-being check around 7 p.m. Tuesday on the 6900 block of South Aberdeen Street. Police said the family member discovered the […]
CHICAGO, IL・1 DAY AGO
CBS Chicago

PHILADELPHIA (CBS) — Two Philadelphia Water Department workers have been arrested and charged in connection with a crash and shooting in South Philly on Tuesday. Police say Rafael Thomas and William Stewart III were involved in the incident at 24th Street and Passyunk Avenue. That’s where police say their company truck and another car collided, then the drivers got into a fight. One of the workers opened fire and then drove away. Thankfully, no one was struck.
PHILADELPHIA, PA・7 DAYS AGO

The family of the 6-year-old boy in Michigan who was shot outside their neighbors' home while retrieving his bicycle has lawyered up ... and they're dragging the neighbors to court. According to new legal docs, obtained by TMZ, Coby Daniel's father says his son is struggling to recover from the...
PUBLIC SAFETY・9 HOURS AGO
ABC 7 Chicago

John Wayne Gacy was convicted of killing 33 young men and boys in the Chicago area in the 1970s.
CHICAGO, IL・2 DAYS AGO
CBS Chicago

CHICAGO (CBS)– A 17-year-old boy was stabbed with scissors after an argument on a CTA Red Line platform early Wednesday at the Jackson station in the Loop. Police said during the argument, around 1:30 a.m., a man chased the teen with a broom and hit him, while a woman stabbed the boy in the leg. The teen was taken to Northwestern Memorial Hospital in serious condition. The offenders ran off before police arrived.
CHICAGO, IL・1 DAY AGO
cbslocal.com

NEW YORK (CBSNewYork) — A mother has filed a wrongful death lawsuit after her son died in custody while being held on a city jail barge near Rikers Island. According to Attorney Pamela Roth, Stephan Khadu had no health issues when he entered the Department of Correction system. Recent Rikers...
LAW・14 DAYS AGO
newsitem.com

Police: Woman pulls gun on two males at Weis Markets who were assaulted

SHAMOKIN — Two people were taken into custody Monday morning after a woman pulled a handgun on two males who moments earlier were punched in the face by another male inside Weis Markets. Chief of Police Raymond Siko II reported Zykia I. Irby-Manners, 35, and Alexander Pagan, 30, both of...
SHAMOKIN, PA・2 DAYS AGO
ABC7 Chicago

CHICAGO -- A 91-year-old cab driver was shot Saturday night in a carjacking in the city's Roseland neighborhood on the Far South Side. The driver was sitting in a blue Hyundai in the 10700 block of South Langley Avenue about 4:30 a.m. when he was forced out of his car at gunpoint and shot after complying with the gunman, Chicago police said.
CHICAGO, IL・5 DAYS AGO
East Bay Times

OAKLAND — A 28-year-old man killed Wednesday night in a drive-by shooting outside a West Oakland liquor store was identified by police Friday as Rashad Brinson. Brinson, who authorities said was a transient, was shot about 7:15 p.m. Wednesday in the 2400 block of Adeline Street. He died later at a hospital.
OAKLAND, CA・5 DAYS AGO
FOX31 Denver