By Eric Garcia
The Independent
25 days ago 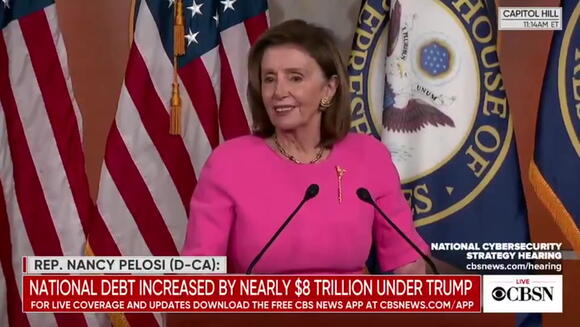 House SpeakerNancy Pelosi chided Republicans for not voting to raise the debt limit on Thursday, asking why Democrats always need to be more responsible.

The House Speaker hosted Senate Majority Leader Chuck Schumer and Treasury Secretary Janet Yellen during her weekly press conference. On Tuesday, the House voted to extend the debt limit until December 2022 and keep the government open until 3 December of this year.

“They voted to shut down government and not honour the full faith and credit of the United States of America,” Ms Pelosi said, noting that the bill included disaster relief for those affected by Hurricane Ida, which affected multiple Republican districts.

The House vote was strictly along party lines, with all 220 Democrats voting for it and 211 Republicans voting against it. Senate Minority Leader Mitch McConnell has indicated he will not support lifting the debt limit.

The White House budget office has reportedly told federal agencies to prepare for the possibility of a government shutdown amid fears a funding resolution may not be reached.

Ms Pelosi criticised her Republican colleagues for making it a contentious topic.

“Why should it be that we as Democrats always come to the rescue when it's a Republican president,” she told reporters, noting that she and other Democrats voted to lift the debt limit, including when Donald Trump was president.

“The former president was famous for not paying his bills, and they want to do that again,” she said. “But we cannot let them do that and jeopardise our economy.”

Ms Yellen has already warned Congress that the department could run out of tools for maintaining the full faith and credit of the United States by October.

Stop spending $ we don't have and stealing from our children's futures, enough is enough no more debt limit increases, learn to live within your means and quit stealing from us all with tax increases and borrowing $ just to spend it on pork barrel projects we don't need Nancy

Debt limits were raised by Trump because of the virus. It was used to shore up the economy when places had to shut down.

This is SOOOO topical of a Leftist brain journalist! WHY WHY WHY Didn't you have the balls to show the ENTIRE clip of that segment? You ONLY showed the first 3 people that Ted Cruz asked that question! There were a total of 5! CHICKEN! 🐔🐔🐔🐔 Because Ted Cruz is that GOOD!

Democrats are terrified of what the future holds for them in the United States Senate. The party currently controls half the seats in the chamber, giving them, with Vice President Harris’s tie-breaking vote, the narrowest possible majority. But some in the party — like pollster David Shor, recently profiled by Ezra Klein in the New York Times — believe demographic trends put Democrats at grave risk of falling into a deep hole over the next two election cycles.
CONGRESS & COURTS・7 HOURS AGO
Fox News

The American people seek to have a better country, not a different one, "Sunday Night in America" host Trey Gowdy said on his show over the weekend. The former South Carolina congressman urged congressional Republicans to "put their differences and ambitions aside long enough to let history and the American people restore balance" in his opening monologue Sunday as the country looks ahead to the 2022 midterm elections.
CONGRESS & COURTS・19 HOURS AGO
Business Insider

Republican Sen. Bill Cassidy says he won't vote for Trump in 2024 because 'elections are about winning'

Trump is the first Republican president "to lose the House, the Senate and the presidency in four years," the Louisiana lawmaker told Axios.
PRESIDENTIAL ELECTION・3 HOURS AGO
POLITICO

Trump is already trying to tangle the probe up in the courts. He doesn’t have to succeed.
PRESIDENTIAL ELECTION・1 HOUR AGO

Sen. Bill Cassidy was one of seven Republican senators who voted to convict Donald Trump during his second impeachment.
PRESIDENTIAL ELECTION・4 HOURS AGO
HuffingtonPost

Democrats in the House of Representatives will consider getting rid of the arbitrary limit on how much money the U.S. government can borrow to fund operations. House Majority Leader Steny Hoyer (D-Md.) said in a letter to fellow lawmakers over the weekend that “the House will explore options to remove the threat that the debt limit poses over the long term, now that Republicans have demonstrated a willingness to weaponize it for partisan purposes.”
CONGRESS & COURTS・4 HOURS AGO
Newsweek

"That's not necessarily something we want to do up front…but if he has pieces of information we need, we certainly will," said the Illinois lawmaker.
CONGRESS & COURTS・1 DAY AGO
Newsweek

On Wednesday Trump said, "If we don't solve the Presidential Election Fraud of 2020…Republicans will not be voting in '22 or '24."
PRESIDENTIAL ELECTION・1 DAY AGO

Biden to speak to Senator Manchin on spending bill

WASHINGTON, Oct 18 (Reuters) - U.S. President Joe Biden said on Monday that he was going to speak with Senator Joe Manchin, the centrist Democrat from coal-rich West Virginia whose vote is crucial to the passage of the budget reconciliation bill pending in Congress. Asked by reporters at the White...
CONGRESS & COURTS・10 MINUTES AGO
Slate

The Renew America Movement is urging moderate Republicans to support Democrats as part of a bid to defeat the pro-Trump GOP.
U.S. POLITICS・3 DAYS AGO
LehighValleyLive.com

White House chiefs of staff should never use emojis. Using two of them, President Joe Biden’s Chief of Staff, Ron Klain, stepped on a landmine when he endorsed a Harvard economist’s tweet which suggested the rising cost of goods across the country is a "high class problem." An incredibly tone-deaf...
PRESIDENTIAL ELECTION・3 DAYS AGO
Reuters

Good morning from Augusta. The Bangor Daily News is hosting a free virtual forum on Question 1, the anti-corridor referendum on the Nov. 2 ballot, tonight at 6 p.m. Sign up here. QUOTE OF THE DAY: “The old saying goes ‘where you sit is where you stand,’” said Sen. Angus...
BANGOR, ME・5 DAYS AGO
FOXBusiness

House Speaker Nancy Pelosi indicated Tuesday that she would support a proposal that would eliminate the need for Congress to hold regular votes to raise the debt ceiling. Under the proposal introduced by House Budget Committee Chairman John Yarmuth, D-Ky., and Rep. Brendan Boyle, D-Pa., the Treasury Secretary would have authority to raise the debt ceiling at their discretion, while Congressional lawmakers would vote only if they wished to overrule a hike.
CONGRESS & COURTS・6 DAYS AGO
Washington Examiner

House Speaker Nancy Pelosi on Tuesday signaled support for giving the Treasury Department unilateral authority to raise the debt limit and ending the requirement for congressional approval. “I do think it has merit,” the California Democrat told reporters. Congress has regularly struggled to find enough votes to raise the debt...
CONGRESS & COURTS・6 DAYS AGO
Washington Times

Pro-life Democrats ask McAuliffe why they should vote for him

The U.S. House of Representatives recently passed an extreme abortion bill that would invalidate health and safety protections for women seeking an abortion, including eliminating parental consent laws which protect young girls from sexual predators and sex trafficking. In a recent debate, Virginia Democratic Gubernatorial candidate Terry McAulliffe eagerly expressed that he would be a “brick wall” against legislation to make abortion safer for women.
PRESIDENTIAL ELECTION・7 DAYS AGO
Yellowhammer News

On Thursday, the U.S. Senate voted along party lines 50-48 to pass an agreement to raise the federal debt limit by $480 billion through December 3. The Democrat-controlled U.S. House of Representatives will now consider the measure. To get that vote, a group of Republican Senators joined Senate Majority Leader...
PRESIDENTIAL ELECTION・10 DAYS AGO
Fox News