Fed ‘Working Proactively’ To Issue Its Own Digital Dollar — Could It Topple Bitcoin and Other Cryptocurrencies? 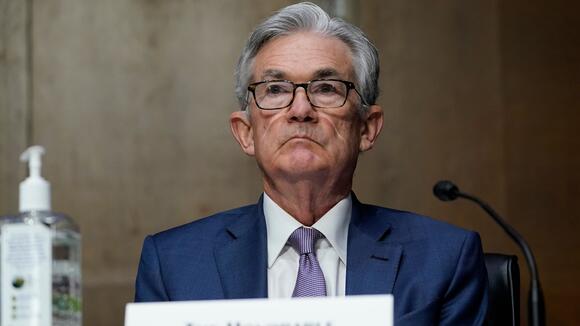 Fed Chairman Jerome Powell reiterated yesterday that the Fed is in the process of evaluating the issue of a central bank digital currency (CBDC) and that it will release a whitepaper on digital currencies “soon.” He had previously announced the whitepaper in July , saying its goal was to begin a major public conversation and lay out the potential benefits and also the potential risks of a CBDC.

Economy: Fed: Inflation Hotter Than Expected, But Still Temporary
Learn: What Is the Next Big Cryptocurrency To Explode in 2021?

Speaking at a post-meeting press conference yesterday, Powell said that while it’s really important that the Central Bank maintain a stable currency and payment system for the public’s benefit, “we also live in a time of transformational innovation around digital payments, and we need to make sure that the Fed is able to continue to deliver to the public a stable and trustworthy currency and payment system,” according to a transcript of his speech. Powell added that the Fed needs to make sure that appropriate regulatory protections are in place, “and today they really are not in some cases.”

“So with that in mind and with the creation of myriad private currencies and currency-like products, we’re working proactively to evaluate whether to issue a CBDC,” he said.

The Chair explained that there are two broad work streams. One of which is technology, both at the Board and in the Federal Reserve Bank of Boston’s work with MIT. As for the other, it aims to identify, scope out, deal with and analyze the various public policy issues, he said.

Examine: How These Major Cryptos Have Fared in 2021

“We think it’s our obligation to do the work, both on technology and public policy to form a basis for making an informed decision. The ultimate test will apply when assessing a central bank digital currency and other digital innovations is, are there clear and tangible benefits that outweigh any costs and risks?”

David Grasso, CEO of Bold TV, told GOBankingRates that the Fed’s digital currency would be what it sounds like — government sanctioned digital dollars that don’t require banks to act as an intermediary.

Grasso added that some people are worried a digital dollar could compete with major cryptocurrencies, such as Bitcoin . In addition, he said that many argue America is falling behind other economic powers who are racing to release their digital currencies. “At the current rate, China will likely roll their own digital currency out first,” he said.

Asked about that point during the press conference yesterday, Powell said he didn’t believe the U.S. was falling behind in the global race for digital currency. “I think it’s more important to do this right than to do it fast,” he clarified. “We are the world’s reserve currency. And I think we’re in a good place to make that analysis and make that decision.”

Find: 8 Best Cryptocurrencies To Invest In for 2021
Explore: New Study Dubs California No. 1 Most ‘Crypto-Ready’ State

Powell stated that the Fed “would have to have a meeting of the minds with the Administration and also probably with Congress.” Noting that this will be a government-wide decision, he elaborated: “We would really like to have broad support for this. It’s a very important innovation . And I think we would need to go ahead, and that’s the process we’re engaged in.”

This article originally appeared on GOBankingRates.com : Fed ‘Working Proactively’ To Issue Its Own Digital Dollar — Could It Topple Bitcoin and Other Cryptocurrencies?

The Federal Reserve announced a sweeping set of rules today, which will prohibit the purchase of individual securities, restrict active trading and increase the timeliness of reporting and public...
U.S. POLITICS・1 DAY AGO
GOBankingRates

Bitcoin mining company Stronghold Digital Mining, which has environmentally beneficial operations as it's powered by coal refuse sites, debuted its Initial Public Offering (IPO) on the NASDAQ under...
INDUSTRY・2 DAYS AGO
bloombergtax.com

U.S., five other countries announce deal on digital tax rollbacks. A deal between the U.S. and five European countries on digital taxes will help avert a trade war—though broader questions remain about rolling back those taxes as countries work to implement a new global tax deal. The deal will see...
ECONOMY・23 HOURS AGO

The cryptocurrency market is the "most honest market we have in the country," the venture capitalist Peter Thiel said, according to The Information.
MARKETS・2 DAYS AGO
POLITICO

A formal move to green-light crypto trading by banks would probably be met with resistance by advocates of tough financial rules.
POTUS・5 HOURS AGO
MarketWatch

Gold climbs, but ends below the session’s high after Powell’s ‘time to taper’ remarks

Gold futures climb Friday, but with bullion ending below the day's best levels after remarks from Federal Reserve Chairman Jerome Powell raised the likelihood that the central bank will start to slow, or taper, its monthly asset purchases.
BUSINESS・6 HOURS AGO
notebookcheck.net

In an interview with Business Insider, a 31-year-old former pediatric nurse from Omaha in the US state of Nebraska has shared the story of his unexpected success which serves as an example that even small crypto traders can, with a little bit of time and luck, profit from the continuing boom revolving around cryptocurrencies like Bitcoin. The crypto journey of Josh Dorgan began in the year of 2017, when one bitcoin was only worth a measly US$2,000.
NEBRASKA STATE・2 DAYS AGO

Bitcoin has dropped 3.8% in the 24-hour chart as the Chairman of the U.S. Federal Reserve Jerome Powell gave a speech on the current economic outlook. As of press time, the crypto market has negatively reacted to Powell’s statements as the intuition finally hints at a possible start of tapering.
BUSINESS・3 HOURS AGO
MarketWatch

The Federal Reserve has unveiled new rules designed to restrict the purchase and trading of individual securities by the central bank’s policymakers and senior officials. What Happened: The new rules restrict Federal Reserve Bank and Board policymakers and their senior staff from purchasing individual stocks, holding investments in individual bonds, holding investments in agency securities (either directly or indirectly) or entering into derivatives.
U.S. POLITICS・1 DAY AGO
SmartAsset

How to Invest in Blockchain

Blockchain is a peer-to-peer distributed ledger technology (DLT) system that is decentralized. It makes the records of digital transactions transparent and unchangeable. Blockchain is a relatively new and exciting technology that has gained a lot of interest from investors. Some think … Continue reading → The post How to Invest in Blockchain appeared first on SmartAsset Blog.
MARKETS・9 HOURS AGO

WASHINGTON (Reuters) – The U.S. Federal Reserve on Thursday banned individual stock purchases by top officials at the central bank and unveiled a broad set of other restrictions on their investing activities roughly six weeks after reports of active trading by some senior policymakers triggered an ethics uproar. Fed Chair...
U.S. POLITICS・1 DAY AGO
MarketWatch

A federal proposal to require banks to file financial reports about U.S. bank accounts to the Internal Revenue Service has attracted sharp criticism from New Hampshire Republicans in recent weeks – with the governor and House speaker arguing it will impinge on privacy and freedom.  But as lawmakers tinker with the idea down in Washington, […] The post Banks rally opposition to IRS reporting proposal appeared first on New Hampshire Bulletin.
ECONOMY・1 DAY AGO
The Independent

Powell says inflation risks rising, but Fed can be 'patient'

Federal Reserve Chair Jerome Powell said Friday that the tangled supply chains and shortages that have bedeviled the U.S. economy since this summer have gotten worse and will likely keep inflation elevated well into next year. The Fed is not yet prepared to lift its benchmark interest rate, he said, though he suggested that the economy may be ready for a rate hike next year. There is now greater risk of "longer and more persistent bottlenecks and thus to higher inflation,” Powell said at a virtual conference hosted by the South African Reserve Bank.Powell, echoing many economists, has previously...
BUSINESS・5 HOURS AGO
MarketWatch

The Federal Reserve on Thursday announced new rules to restrict the trading and investment activity of top officials and senior staff.
U.S. POLITICS・1 DAY AGO
WEKU

The Federal Reserve is imposing new restrictions on investments by its senior officials as it seeks to address a controversy involving trades made by two regional Fed bank presidents last year. The new rules prohibit policymakers and senior staff at the Fed from buying individual stocks. They're also barred from...
U.S. POLITICS・1 DAY AGO
Street.Com

Federal Reserve Gov. Chris Waller again expressed doubt about deploying a digital dollar Thursday, saying it would put the Fed in competition with the banking system. “With a central bank digital currency, you’re asking a very direct question,” he said at a central bank policy conference, according to MarketWatch. “Should...
BUSINESS・1 DAY AGO
MarketWatch

U.S. Securities and Exchange Commission Chairman Gary Gensler encouraged crypto entrepreneurs to seek to comply with U.S. financial and banking regulations, placing special emphasis on the need for oversight of stablecoins, or digital assets that seek to maintain a peg to the U.S. dollar.
MARKETS・1 DAY AGO