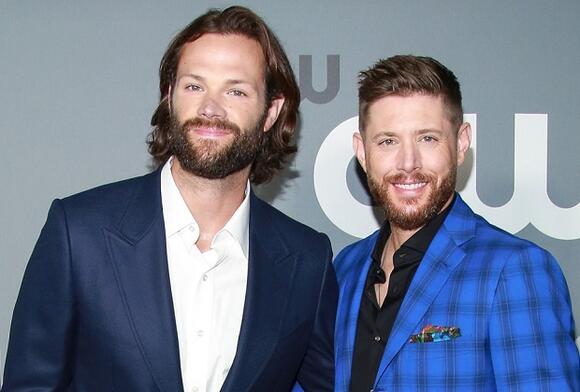 The Winchester brothers are reuniting: Jensen Ackles is set to direct an episode of Walker , starring his former Supernatural castmate Jared Padalecki, TVLine has learned.

Ackles will step behind the camera for the seventh installment of Season 2, which premieres Thursday, Oct. 28 at 8/7c on The CW.

Asked about the possibility of Ackles guest-starring on Walker , Padalecki previously told TVLine , “I cannot wait for Jensen to be on the show!… One of these days, he’ll have to come on and be my bow-legged friend. We’ll put him on horseback and give him a cowboy hat.”

* TBS has renewed Full Frontal With Samantha Bee for Season 7, which will relocate from Wednesday to Thursday nights beginning in January.

* David Oyelowo ( Selma ) and Rashida Jones ( Parks and Recreation ) have joined Apple TV+’s Wool , based on the trilogy of dystopian novels of the same name, playing Silo sheriff Holston and his IT employee wife Allison.

* Apple TV+ has unveiled a trailer for Acapulco , a Spanish and English-language comedy debuting Friday, Oct. 8:

Corbin Bernsen will see you in court. Again. The actor is reprising the role of Arnie Becker in ABC’s L.A. Law revival pilot, our sister site Deadline reports. Bernsen portrayed the attorney for all eight seasons of the original series, which aired from 1986 to 1994 on NBC, and even returned for the 2002 TV movie. Bernsen joins Blair Underwood, previously reported to be returning for the revival as Jonathan Rollins. According to Deadline, Underwood and Bernsen are the only original cast members returning to the pilot as series regulars, but more are expected to guest-star should the pilot be ordered to...
TV & VIDEOS・7 DAYS AGO
TVLine

The Conners‘ latest casting decision is a Righteous one. The ABC sitcom is adding Tony Cavalero in the recurring role of Aldo, Harris’ new boyfriend. Cavalero will appear opposite Righteous Gemstones costar John Goodman, who of course plays Conner family patriarch (and Harris’ grandfather) Dan. He’ll make his debut during the Wednesday, Oct. 13 episode, which is set to feature Dan and Louise’s wedding. Aldo is described as “laid back and affable.” He is a veteran tattoo artist at the shop where Harris has worked since Season 2. He is considerably older than Harris and a single father to two young...
TV & VIDEOS・24 DAYS AGO
TVLine

Starz’s John Wick prequel series The Continental has found its Winston Scott: Colin Woodell (The Flight Attendant, The Originals) will star as the younger version of Ian McShane’s movie character, our sister site Deadline reports. Produced by Lionsgate Television, the three-night event takes John Wick fans back to 1975 New York City, where a young criminal named Winston Scott (Woodell) navigates the city’s nefarious underbelly in an attempt to take control of The Continental, a notorious hangout for all manner of ne’er-do-wells. As previously reported, Mel Gibson will play a character named Cormac. Also joining the ensemble, per Variety, are Mishel Prada...
TV SERIES・5 DAYS AGO
MovieWeb

Jensen Ackles is saddling up for his next big role. The Supernatural star has just joined the ensemble cast of the upcoming Western movie Rust, putting the actor alongside Alec Baldwin, Travis Fimmel, Brady Noon, and Frances Fisher. Baldwin and Joel Souza conceived the story with Souza writing the screenplay and serving as the director.
CELEBRITIES・4 DAYS AGO

For two decades now, Jensen Ackles has had a regular presence on TV thanks to TV shows like Dark Angel, Dawson’s Creek, Smallville and Supernatural. Movies-wise though, excluding voiceover work on direct-to-video animated DC movies, he hasn’t had a starring role in a cinematic project since 2009’s My Bloody Valentine 3D. Well, that will soon change, as it’s been announced that Ackles is starring opposite 30 Rock’s Alec Baldwin in a Western.
MOVIES・13 DAYS AGO
thenerdstash.com

Jensen Ackles has signed onto a new role, one that may not come as a surprise to fans of his. That’s right, Jensen Ackles takes his first western role in the upcoming Rust. He announced the news with a Tweet earlier today. Anyone who watched Supernatural will remember that there were a few iconic episodes where Ackles went full cowboy. Turns out, Ackles himself is quite a fan of Westerns. Fans are interested to see what he brings to the table in a true Western setting. Let’s take a look at the new role Jensen Ackles will be in for the Western genre.
CELEBRITIES・13 DAYS AGO
Variety

Jensen Ackles Pays Tribute to ‘Rust’ Cinematographer Halyna Hutchins: ‘She Was an Inspiration’

Jensen Ackles, an actor working on “Rust,” has made a statement paying tribute to the late cinematographer Halyna Hutchins, who was killed in an on-set accident in which a prop firearm was discharged. Ackles recounted his working relationship with Hutchins in an Instagram post shared on Sunday. “I’m not even sure where to start,” Ackles wrote. “This has been a tragedy of epic proportions that we are all still processing.” “Earlier last week I felt compelled to tell Halyna just how awesome I thought she was. I told her how incredible I thought her camera shots were and just how exciting it was...
CELEBRITIES・1 DAY AGO
TVLine

Tom Clancy’s Jack Ryan doesn’t have a Season 3 premiere date yet, but he’s already planning his next mission: Amazon Prime has renewed the John Krasinski-starring thriller for Season 4, our sister site Variety reports. Additionally, Michael Peña (Narcos: Mexico) has boarded the series in an undisclosed role. In the third season — which recently wrapped production — “Jack is on the run and in a race against time,” per Variety. “He is wrongly implicated in a larger conspiracy and suddenly finds himself a fugitive out in the cold. Now, wanted by both the CIA and an international rogue faction that...
TV & VIDEOS・11 DAYS AGO

Supernatural favourite Jensen Ackles is set to patrol the American frontier in upcoming movie Rust. According to Deadline, he's co-starring in the new western opposite Hollywood veteran Alec Baldwin and Raised by Wolves actor Travis Fimmel for writer-director Joel Souza. It's not demons he'll be disposing of this time, though.
MOVIES・12 DAYS AGO
Empire

A onetime Gotham citizen is returning to Fox, by way of The Resident‘s fifth season: Actress Kaley Ronayne has been tapped for a recurring role on the medical drama, TVLine has exclusively learned. Ronayne will appear as Cade, a badass emergency room doctor described as an “action heroine.” Strong and athletic, Cade takes no prisoners, but also has her own brand of no-nonsense empathy for her patients. She’s a rational problem-solver and, physically, a daredevil. As Resident co-showrunner Peter Elkoff tells TVLine, Cade will have a large presence in the second half of Season 5, where she’ll “help us do one of those thriller-y...
TV SERIES・6 DAYS AGO
TVLine

George Lopez’s next family sitcom is easily his most familial yet. NBC has given a formal pilot order to Lopez vs. Lopez, which stars the comedian opposite his real-life daughter Mayan Lopez. From Universal Television, the project is described as a “working-class family comedy about dysfunction, reconnection and all the pain and joy in between.”
TV & VIDEOS・3 DAYS AGO

Crazy Ex-Girlfriend star Rachel Bloom just found her next TV role… well, two of them. Bloom will play twin sisters in the Hulu comedy Badass (And Her Sister), our sister site Deadline reports. The project, now in development at the streamer, will reunite Bloom with Aline Brosh McKenna, who co-created Crazy Ex with her and served as showrunner. Bloom will play a spy “who tires of her life of sexy espionage and goes to live with her pushover twin sister,” also played by Bloom. “Together, they learn what it means to actually be badass,” per the official description. Bloom and McKenna wrote...
TV & VIDEOS・4 DAYS AGO
Deadline

A video depicting Rust costar Jensen Ackles talking about gun training on the set of the film Rust has surfaced. The clip was made between Oct. 15-17 during Ackles’ appearance at a fan event in Denver for his long-running CW show Supernatural. The clip, in which Ackles describes a brief training session with the Rust armorer (the crew member in charge of prop firearms), drew a lot of attention following the accidental shooting Thursday on the set of the film which resulted in the death of cinematographer Halyna Hutchins and the wounding of director Joel Souza after Baldwin “discharged” a prop gun. The video has...
MOVIES・3 DAYS AGO
E! News

Watch: Alec Baldwin Breaks Silence After Deadly On-Set Shooting. Several days before Alec Baldwin fired a prop gun that killed cinematographer Halyna Hutchins on the set of his new film Rust, his co-star Jensen Ackles talked to fans about how he was coached about safe usage of a firearm for the movie.
MOVIES・3 DAYS AGO
TVLine

TVLine Items: Head of the Class Trailer, Power Rangers to Netflix and More

HBO Max is at the Head of the Class with the first trailer for its upcoming reboot of the 1980s ABC sitcom. The comedy revolves around a group of overachieving high school students who meet their greatest challenge — a teacher (played by One Day at a Time‘s Isabella Gomez) who wants them to focus less on grades and more on experiencing life. As previously announced, original series star Robin Givens will reprise her role as Darlene Merriman, who is now a single mother to one of the students. Head of the Class (premiering Thursday, Nov. 4 with all 10 episodes) comes from...
TV SERIES・4 DAYS AGO
arcamax.com

Jensen Ackles, an actor on the movie “Rust” along with star Alec Baldwin, is sharing his thoughts about last week’s shooting death of cinematographer Halyna Hutchins. “I’m not even sure where to start,” Ackles wrote Sunday on Instagram. “This has been a tragedy of epic proportions that we are all still processing.”
CELEBRITIES・1 DAY AGO
hotnewhiphop.com

The conversation regarding the shooting that left a director of photography dead and a director injured has left Alec Baldwin in the crosshairs of critics. We reported on the tragic shooting that occurred in New Mexico on the set of Rust that resulted in DP Halyna Hutchins's death. There has been an outpouring of support to everyone involved, including director Joel Souza who was injured.
CELEBRITIES・3 DAYS AGO
TVLine

The TVLine-Up: What's Returning, New and Leaving the Week of Oct. 24

This weekly feature is in addition to TVLine’s daily What to Watch listings and monthly guide to What’s on Streaming. With nearly 500 scripted shows now airing across broadcast, cable and streaming, it’s easy to forget that a favorite comedy is returning, or that the new “prestige drama” you anticipated is about to debut. So consider this our reminder to set your DVR, order a Season Pass, pop a fresh Memorex into the VCR… however it is you roll. This week, you’ll find 11 returning series (including All American, Curb Your Enthusiasm, Insecure, Love Life and Walker), five series debuts (including...
MLB・2 DAYS AGO
New York Post

“Rust” co-star Jensen Ackles posted a heartfelt tribute to cinematographer Halyna Hutchins, who was killed on set when actor Alec Baldwin fired a prop gun loaded with a live round on set last week. Ackles called the incident “a tragedy of epic proportions that we are all still processing,” in...
CELEBRITIES・1 DAY AGO