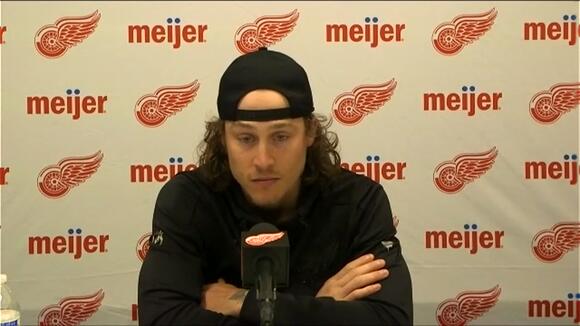 His decision means he cannot play in the nine games the Detroit Red Wings are in Canada because of border restrictions, but Bertuzzi doesn’t sound like he will be inclined to change his mind.

Bertuzzi, 26, said he made his decision with “family and fiancée's family. It’s personal choice. It’s personal.” Bertuzzi announced on social media earlier this month that his fiancee, Ashley Greasley, are expecting their first baby.

PREDS PROSPECT: 'I feel like a new version of me' after coming out

Teams cannot mandate a player be vaccinated, but they suspend him without pay for missing hockey activities. Bertuzzi would miss upwards of $400,000 because he cannot play in Canada.

General manager Steve Yzerman revealed Wednesday that Bertuzzi, a top-line forward, is the only Wings player to not be vaccinated.

Bertuzzi has not played since leaving a game in January with a back injury. He underwent surgery in April, and was enthused to be back at a practice.

“I'm feeling really good,” Bertuzzi said. “I think I’m cleared and throughout camp I will be getting bumped and hit. I was really happy with my progress and my recovery. I stayed in Detroit all summer, worked out and skated. I feel really good.”

During Saturday night’s game between the Detroit Red Wings and Vancouver Canucks, Oliver Ekman-Larsson speared Mortiz Seider in the family jewels during a stoppage of play. Take a look as Seider gets speared where it counts before Tyler Bertuzzi comes to his defense.
NHL・7 DAYS AGO
Detroit Sports Nation

Detroit Red Wings forward Tyler Bertuzzi tallied his first goal of the season just seconds into the 2nd period of tonight’s game, dangling past a Lightning defender and beating Andrei Vasilevskiy with a quick wrister:. Oh, and Moritz Seider picked up the assist, his first NHL point. The Red Wings...
NHL・9 DAYS AGO
detroitsportsnation.com

The Detroit Red Wings earned their first victory of the 2021-22 NHL Season tonight at Little Caesars Arena, triumphing over the visiting Vancouver Canucks by a 3-1 final score. However, one moment during a break in play is making the rounds on Twitter, and fans are getting a kick out...
NHL・7 DAYS AGO
ClickOnDetroit.com

Dylan Larkin will not play in Saturday night’s game against the Vancouver Canucks. Larkin was racing Tampa’s Mathieu Joseph for the puck about midway through the second period Thursday night. He cut in front of Joseph to establish position along the boards, and turned his back to Joseph who gave him a shove from behind.
NHL・7 DAYS AGO

The opening night rosters for all 32 NHL teams were sent into the NHL offices Monday at 5:00 PM ET. Much speculation has been made about the Detroit Red Wings roster because the team had one veteran on a PTO, two players are coming back from major injuries, and several players have been nursing minor injuries.
NHL・12 DAYS AGO
snntv.com

DETROIT, MI (SNN-TV) - Following their 6-2 opening night loss to the Pittsburgh Penguins, the Tampa Bay Lightning are in Detroit tonight to take on the Red Wings. Little Caesars Arena will play host, as the 2-time defending Stanley Cup champions hit the road for the first time this season.
NHL・9 DAYS AGO
chatsports.com

Tyler Bertuzzi scored four goals in the Detroit Red Wings overtime loss against the Tampa Bay Lightning. The Wings blew a three point lead in the third period. The Red Wings had a four minute power play three minutes into the first, but they struggled to gain zone entry, never really finding any solid offensive rhythm in the offensive zone. A few minutes later, Givani Smith was called for hooking, and the penalty kill was five its first test. They looked solid against a strong Lightning power play, never letting them gain good rhythm.
NHL・9 DAYS AGO

Tyler Bertuzzi’s incredible four-goal game in Thursday night’s Detroit Red Wings opener evoked memories of Sergei Fedorov’s five-goal game during the 1996-97 season. Bertuzzi nearly reached five in the Wings’ 7-6 overtime loss to the Tampa Bay Lightning at Little Caesars Arena. The 2021-22 season marks the 25th anniversary of that 1996-97 season, in which the Red Wings snapped a Stanley Cup drought of more than four decades. To commemorate the anniversary — for one of the most-beloved championship teams in the history of Detroit sports — the Free Press has crafted a new hardcover book, “Stanleytown 25 Years Later: The Inside Story of How the Stanley Cup Returned to the Motor City after 41 Frustrating Seasons.” “Stanleytown 25 Years Later” costs $39.95 and can be ordered at RedWings.PictorialBook.com. Books are shipping right now. The following excerpt from the book recounts Fedorov’s five-goal night, when he scored all Detroit’s goals and when the Wings rallied for a Christmastime victory in overtime.
NHL・8 DAYS AGO
The Hockey Writers

The Detroit Red Wings season begins on Thursday, Oct. 14, against the defending Stanley Cup champion Tampa Bay Lightning. With the 23-man roster finalized and only time separating everyone from Detroit hockey, what can everyone expect from the lineup, and which goalie could be (or should be) starting?. Red Wings’...
NHL・9 DAYS AGO
wingsnation.com

The Detroit Red Wings are 0-0-1 to start the 2021–22 season after falling 7-6 to the Tampa Bay Lightning in Thursday’s season-opening game at Little Caesars Arena. Tyler Bertuzzi led the way for Detroit with four goals, becoming the first Red Wing to score four times since Jakub Vrána helped Detroit beat the Dallas Stars 7-3 on Apr. 22, 2021.
NHL・9 DAYS AGO
Detroit News

Detroit — This year hasn't been easy for Tyler Bertuzzi. He missed the majority of last season after injuring his back in the ninth game, not playing again and needing back surgery. Bertuzzi had to go through a lengthy rehabilitation process to get ready for the season. He decided not...
NHL・8 DAYS AGO

Lapointe: Red Wings' Tyler Bertuzzi Scores on Lots of Shots, but Won't Take One for Covid

Thursday night’s goal explosion during the Red Wings’ home opener brought into clear focus the Tyler Bertuzzi vaccine crisis. Bertuzzi scored a career-best four times in a 7-6 loss in overtime to the Stanley Cup champion Tampa Bay Lightning at the LCA. His brilliance was a promising but mixed blessing....
NHL・8 DAYS AGO
Detroit Sports Nation

Detroit Red Wings forward Tyler Bertuzzi found himself in the headlines last week when GM Steve Yzerman revealed that is the only player on the roster that hasn’t received the COVID-19 vaccination. And for the rugged Bertuzzi, it isn’t because he’s not been able to receive the vaccination yet, but...
NHL・14 HOURS AGO
Yardbarker

“I’ve talked about this lots. We want to look after each other,” Detroit Red Wings head coach Jeff Blashill said in the aftermath of a wild 7-6 overtime loss to the Tampa Bay Lightning that saw captain Dylan Larkin get ejected from the game (and ultimately suspended by the NHL for one game) because of a punch he threw at Lightning forward Mathieu Joseph. “Obviously there was a lot of guys that were willing to stick up for Dylan on the ice and on the bench. I think we’re a close-knit group.”
NHL・5 DAYS AGO
FOX Sports

The young and exciting Detroit Red Wings have certainly caught the eyes of some around the NHL. With a new attitude, and a couple of entertaining games to start the season, Detroit fans have something worth watching when they take on the the Columbus Blue Jackets on Tuesday night. The...
NHL・4 DAYS AGO
MLive.com

DETROIT – Tyler Bertuzzi is easing concerns about how quickly he would recover from major back surgery and return to being the productive, abrasive, effective player he has been for the Detroit Red Wings. Bertuzzi is tied for the NHL lead with five goals, has six points and shares the...
NHL・3 DAYS AGO