By Emily Brooks
WashingtonExaminer
23 days ago 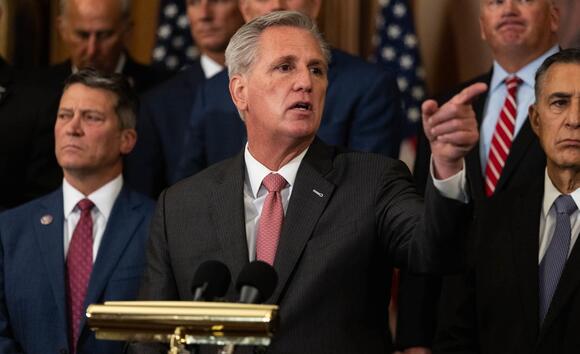 “People have differences of opinion, but the one thing, I think, everybody now sees is what the bill passed in the Senate is a different situation now that it came to the House,” McCarthy said in a press conference on Thursday. “It’s one bill. So you're not voting for a $1.5 trillion infrastructure bill, you're voting for a $5 trillion bill.”

House Republican leaders announced on Tuesday that they will whip votes against the $1.2 trillion infrastructure bill, which was crafted by a bipartisan group of senators and passed with support from 19 Senate Republicans, including Senate Minority Leader Mitch McConnell, last month.

Democratic leaders, though, have put the bill on a two-track path alongside a sweeping social programs spending bill of up to $3.5 trillion that can pass without Republican support in the Senate.

The conservative Freedom Caucus and Republican Study Committee for weeks had been messaging against the infrastructure bill, calling it a “trojan horse” for the reconciliation bill.

“They have their internal firing squad right now upset with each other because one side won't vote for it unless they get reconciliation,” McCarthy said. “So whatever agreement they come upon is not about the infrastructure, it's about whether they can spend $5 trillion. That's different than what they saw in the Senate.”

Despite House Republican leadership whipping votes against the infrastructure bill, a handful of Republicans say they will still vote in favor of it.

Illinois Republican Rep. Adam Kinzinger said on CNN Thursday that “it is a mistake” for Republican leadership to whip votes against the bill.

“I think we need to allow members to vote on a bipartisan bill as they wish. There is concern, of course, with what you’re seeing on the Democratic side, where progressives are saying we have to pass the $3.5 trillion before we can even talk about this $1.5,” Kinzinger said. “Members of the Republicans that want to vote for the bipartisan bill, you shouldn’t whip against it. I intended to vote for it. I think there will be a number of people joining me."

McCarthy rebuffed the suggestion that he is asking his conference to vote against popular infrastructure spending programs.

“You don't get millions of dollars for roads and broadband. What you get is $5 trillion of more inflation, you get a bigger socialist big government, you get a harm to our economy,” McCarthy said.

It's funny, when the rich got a tax break they all was in on it and that raised the budget tremendously, a bill to help American people and infrastructure , they complain about raising the budget. Tax the rich properly and the budget will be find. Really ? It's time fire we the people to start pushing for this infrastructure bill to go through by voting ask them out in 2022. GO VOTE. btw any word on the Arizona ninja audit ? 😆

The California congressman has called the former president a "clear and present danger" to democracy.
POTUS・1 DAY AGO
Fox News

With the Democrats playing defense as they try to hold onto their razor-thin majorities in both houses of Congress next year, and Republicans enjoying historical tailwinds at their backs, House GOP leader Kevin McCarthy's quite confident his party will win back control of the chamber in the 2022 midterm elections.
CONGRESS & COURTS・2 DAYS AGO
The Associated Press

WASHINGTON (AP) — Senate Democrats are set to try again to advance a sweeping elections and voting overhaul bill, testing objections from Republicans with a vote planned for next week, Majority Leader Chuck Schumer announced Thursday. In a letter to colleagues, Schumer, D-N.Y., said Republicans “must come to the table”...
CONGRESS & COURTS・2 DAYS AGO
Newsweek

The $1 trillion infrastructure bill, which Sinema helped broker, was passed by the Senate in August but has yet to be taken up for a vote in the House.
CONGRESS & COURTS・2 DAYS AGO

The Senate will take up voting reform legislation next week, the top Democrat announced Thursday, but Republicans are poised to block it, despite centrist Sen. Joe Manchin's reforms.
CONGRESS & COURTS・2 DAYS AGO
Bakersfield Californian

Democratic Rep. Adam Schiff on Tuesday referred to House Minority Leader Kevin McCarthy as an “insurrectionist in a suit and tie,” as he slammed the House Republican leader for having “absolutely no reverence for the truth.”. Schiff, a California Democrat who chairs the House Intelligence Committee and sits on the...
CONGRESS & COURTS・4 DAYS AGO
Washington Times

Republicans in the largest conservative bloc in the House are leading mobilization efforts against the $1.2 trillion bipartisan infrastructure bill, which passed the Senate with GOP support in August. The Republican Study Committee, chaired by Rep. Jim Banks of Indiana, has issued a series of warnings against the package since...
CONGRESS & COURTS・7 DAYS AGO

SPRINGFIELD – As Washington continues to haggle over an infrastructure bill, a free enterprise organization is targeting Congressman Adam Kinzinger’s Illinois district to voice opposition to the package. The group Club for Growth recently bought television ads in Illinois’ 16th congressional district opposing the over $3 trillion tax increase proposed in the reconciliation bill. The ad was called “Pickpocket” and ran for one week. “Washington is out of Continue Reading
SPRINGFIELD, IL・8 DAYS AGO
northwestgeorgianews.com

WASHINGTON — Some GOP senators appear willing to truncate the cumbersome budget reconciliation process to allow Democrats to raise the debt ceiling on their own before running into the Treasury Department’s Oct. 18 deadline. But Democrats remain opposed to using the budget procedure to pass the measure with a simple...
CONGRESS & COURTS・11 DAYS AGO
New Haven Register

Barrasso began the interview by saying that Biden “surrendered to the radical wing of his party” on Friday when the president went to Capitol Hill to meet with the Democratic caucus about the path forward for two pieces of legislation — the $1.2 trillion bipartisan infrastructure bill and the $3.5 trillion reconciliation bill that includes “soft infrastructure” priorities such as child tax credits, child care and climate change. Currently, the moderate and progressive wings of the party are in disagreement, as progressives refuse to vote for the bipartisan package without simultaneously moving forward the reconciliation bill that a small number of moderates say they won’t support. Barrasso has voted against both.
CONGRESS & COURTS・13 DAYS AGO
CBS News

Biden meets with House Democrats to gain support for his infrastructure, spending bills

President Biden met with Democratic House members on Capitol Hill in an effort to win support and encourage compromise for his infrastructure plan and his massive social programs initiative, two key pieces of his domestic agenda. Christina Ruffini reports.
PRESIDENTIAL ELECTION・14 DAYS AGO

U.S. Rep. Ayanna Pressley claimed a “great victory” for progressives in Washington as President Biden relieved the pressure on Democrats to hammer out a deal on both a bipartisan infrastructure bill and a further left social spending bill. “We earned a great victory for the movement when the president committed,...
BOSTON, MA・14 DAYS AGO
CBS News

Progressive Caucus Chair Congresswoman Pramila Jayapal maintains that child care, Medicare expansion, prescription drug price limits, climate change, immigration, and affordable housing will remain in the slimmed-down social spending bill being negotiated between the White House and congressional Democrats. But she concedes some programs may have to be altered. "Those...
CONGRESS & COURTS・1 DAY AGO
The Independent

Republican Rep Adam Kinzinger – one of Donald Trump’s most vocal critics in the GOP – says he will review “all of the options” after Illinois’ legislature released a map of new congressional districts that could put him at a disadvantage in getting re-elected.Mr Kinzinger, who has served six terms in the House, made the remarks after Illinois released a proposed map with 14 Democratic seats and three Republican seats, the Chicago Sun-Times reported. “Following the release of the new congressional maps for Illinois, my team and I will spend some time looking them over and reviewing all of the...
CONGRESS & COURTS・1 DAY AGO
Markets Insider

Progressives revolted the last time Nancy Pelosi tried to hold a vote on the roads-and-bridges bill, but Sinema seems determined for it to pass first.
CONGRESS & COURTS・2 DAYS AGO

Congressional Democrats, concerned over lukewarm public enthusiasm for their massive social welfare spending package, may be forced to modify a tax-raising provision that has prompted significant backlash.
CONGRESS & COURTS・2 DAYS AGO
Markets Insider

Sinema is fundraising abroad while talks around President Joe Biden's spending plan stall in part over her opposition to tax hikes.
PRESIDENTIAL ELECTION・2 DAYS AGO
WashingtonExaminer

A bill spearheaded by Missouri Republican U.S. Sen. Roy Blunt and supported by three state Congressional reps would deliver about $20 million a year in boosted funding for “conservation opportunity areas” across the Show Me State, where the outdoor industry supports about 100,000 jobs and generates more than $12 billion in annual economic impact.
MISSOURI STATE・4 DAYS AGO
Cincinnati Business Courier

U.S. Sen. Rob Portman, R-Terrace Park, predicted Friday that the $1.2 trillion infrastructure legislation he helped broker will eventually become law, despite infighting among Democrats in the House who are seeking to connect it to a $3.5 trillion social spending bill. “It makes too much sense not to,” Portman told...
CINCINNATI, OH・8 DAYS AGO