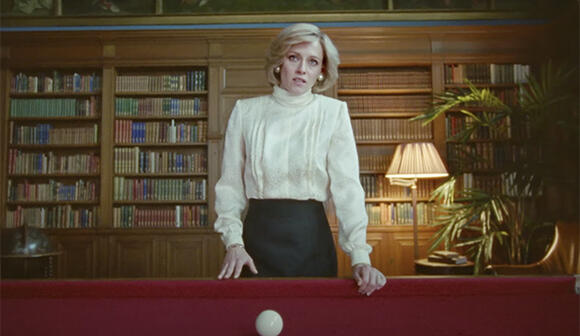 For one, we can finally hear more of Stewart absolutely nailing Lady Di’s distinctive voice, which was teased at the end of the first trailer. The two-minute clip showcases the plot of the film, which covers three days: Diana arriving at Sandringham for Christmas in the early 1990s as her marriage to Prince Charles ( Jack Farthing ) continues to deteriorate and paparazzi hound the royal family.

It also ends with one helluva line as Diana asks, “Will they kill me, do you think?” Oh, yes, they went there.

Since “Spencer” hit the festival circuit earlier this month to raves for Stewart’s performance, the 31-year-old has risen to the top spot in our Best Actress Oscar odds . At the moment, she has 4/1 odds to win, with 11 Experts, five editors and 15 of our top 24 users backing her. This would be the first Oscar nomination for Stewart, who has already won a BAFTA (for Rising Star in 2009) and became the first American actress to win a Cesar Award when she was named Best Supporting Actress for “Clouds of Sils Maria” in 2015. Larraín previously directed Natalie Portman to a Best Actress Oscar nomination for 2016’s “Jackie.”

PREDICT the 2022 Oscar nominees and other awards shows

In August 1997, the world came to a screeching halt following Princess Diana's tragic and untimely death. Diana, who was widely revered by the public, was known for her undeniable beauty and charming personality — but beyond the surface, what really put her over with the public was her enduring charity work. According to TIME, Diana was, at one point, linked to more than 100 charities and even risked her life by visiting Angolan minefields to help de-mine the African country.
CELEBRITIES・18 DAYS AGO
The Independent

Gordon Ramsay recalls cooking for Princess Diana: ‘She, by far, was one of the most gracious members of the royal family’

Gordon Ramsay has reflected on cooking for Princess Diana, calling it the “best meal” he ever made.During Monday’s episode (27 September) of Gordon, Gino and Fred Go Greek, chef Gino D’Acampo asked Ramsay what his favourite meal was to date, to which he replied: “Cooking for Lady Di once.”He called the princess “just beautiful” and compared her to his surroundings in Greece. “I mean, here’s renowned as the supermodel of the islets – Santorini – and she, by far, was one of the most gracious members of the royal family I’ve ever met,” he said.Ramsay cooked for Diana at...
CELEBRITIES・29 DAYS AGO
nickiswift.com

Princess Diana's November 1995 interview with Martin Bashir for BBC1 Panorama "changed the course of royal history," as ITV News put it. More than 23 million people around the world tuned in to watch Lady Di spill the beans about the breakdown of her marriage to Prince Charles amid his involvement with Camilla Parker-Bowles, per ITV News. Diana didn't disappoint — the public, that is. The British royal family, unsurprisingly, is said to have been furious at the Princess of Wales for breaking Queen Elizabeth II's unspoken rule to "never complain, never explain," the Independent noted.
CELEBRITIES・4 DAYS AGO

New photos from Palma de Mallorca, Spain — where Netflix's royal drama is filming season 5 — show Elizabeth Debicki and Dominic West as the spitting images of Princess Diana and Prince Charles aboard a yacht. Debicki emulates the late Princess of Wales in a floral dress and sunglasses, while West was photographed in a suit also sporting shades.
WORLD・14 DAYS AGO
People

Royal historian Robert Lacey, author of the best-selling Battle of Brothers, exclusively writes this week's PEOPLE cover story, offering insights on the state of the monarchy, the Queen's legacy in action, and William and Kate's eye toward their future on the throne. When Prince William ascends the throne, he will...
CELEBRITIES・25 DAYS AGO
Cosmopolitan

Kristen Stewart has opened up about the films she regrets making

Kristen Stewart has made some of our all-time favourite films - from the Twilight series, to Christmas movie The Happiest Season, to the upcoming Princess Diana biopic Spencer. While we're (obviously) big fans, Kristen herself might not say the same, as she's recently opened up about the "bad movies" she's...
CELEBRITIES・1 DAY AGO
The Independent

Princess Diana’s friends say she would be ‘horrified’ by Spencer biopic: ‘She’s seen as this kind of martyr’

A number of Princess Diana’s friends recently said that the late royal would be “horrified” by her portrayals in pop culture, including in the forthcoming film Spencer.In a recent interview with The Telegraph, Majesty editor Ingrid Seward, hair stylist Sam McKnight, make-up artist Mary Greenwell, and fashion designer Jacques Azagury explained that the film — starring Kristen Stewart as the Princess of Wales and directed by Pablo Larrain — doesn’t necessarily get everything right.Set in December 1991 over a three-day period at Sandringham Estate, Spencer touches upon Princess Diana’s struggles with bulimia and self-harm. However, it has been claimed...
CELEBRITIES・2 DAYS AGO

Chloé Zhao’s “Eternals,” the highly-anticipated next entry in the Marvel Cinematic Universe, had its premiere this week, with the film receiving praise on social media. One of the highlights was its inclusion of married LGBTQ+ characters — Brian Tyree Henry as Phastos and Haaz Sleiman as his architect husband. In this episode of “The Take,” Kristen Stewart, who is bisexual, discusses the importance of Marvel representing the LGBTQ+ community and shares a message for any naysayers who speak out against their incorporation.
CELEBRITIES・4 DAYS AGO
Hello Magazine

Princess Diana was born on the Queen's estate – details and photos

Princess Diana married Prince Charles in 1981, but long before she met the Prince of Wales, she had a huge royal connection as she was born on the Queen's Sandringham estate. Although her main childhood home is believed to be Althorp House, where her brother Charles Spencer still lives, Diana was born on 1 July 1961 at Park House, which is also her mother Frances' birthplace.
CELEBRITIES・5 DAYS AGO
IndieWire

Kristen Stewart has a self-deprecating approach to her career spanning more than 50 films, and that took flight with the release of the “Twilight” franchise. The actress, now an Oscar contender for her turn as Princess Diana in Pablo Larraín’s upcoming festival favorite “Spencer,” spoke to the Sunday Times (via Yahoo) about her body of work, which since breaking away from “Twilight” has long been revered by critics. (And there’s of course her legion of “Twilight” fans, too.) Stewart, who has starred in films from directors like David Fincher and Woody Allen, said that choosing roles can be a “total crapshoot.”...
MOVIES・2 DAYS AGO
Vice

Kristen’s career started long before Twilight, though, and even before her big break in Panic Room (2002). Her filmography to date is far from consistent, careening through various genres, styles and levels of quality. This list ranks her performances, not the movies themselves. To count, it must be a credited role in a feature-length film, so no short films, and we’re disregarding what were essentially cameo appearances in Undertow (2004) and Jumper (2008).
MOVIES・21 HOURS AGO

Hollywood's obsession with Princess Diana will never end, but it's getting ridiculous

"Diana: The Musical" offers a sensationalized take on Princess Di's life and legacy. Here's how "The Crown" and Kristen Stewart's "Spencer" do better.
MOVIES・11 DAYS AGO
Vanity Fair

The Year of Lady Di continues in earnest. Amidst Kristen Stewart’s upcoming Spencer biopic and an ill-advised Princess Diana musical on Netflix, The Crown has submitted its Princess Diana for consideration. Ahead of the show’s hotly-anticipated fifth season, Elizabeth Debicki’s Diana and Dominic West’s Prince Charles were spotted filming in Palma de Mallorca, Spain on Tuesday.
CELEBRITIES・13 DAYS AGO
Times and Democrat

Kristen Stewart was initially reluctant to do dance scenes in Spencer

In Pablo Larrain's drama, the Twilight actress plays Princess Diana who is struggling to get through three days with the royal family over Christmas at the Sandringham estate in the early '90s.
THEATER & DANCE・9 DAYS AGO
New York Post

Stewart Pearce’s book was “Diana: The Voice of Change.” Princess Di’s confidante and friend, his “Diana, Wish You Were Here” comes momentarily. Pearce, “Master of Voice” coach of Eddie Redmayne and Hugh Bonneville to pols Margaret Thatcher and Benazir Bhutto, says: “The last years of Diana’s life, moving into independence, watching herself on PBS’s famous interview, this svelte woman of the world became discouraged at her appearance. She loved Charles and suddenly required grounding. Liberation. To stand tall. And a friend introduced us.
13 DAYS AGO
classicfm.com

Matt Damon and Adam Driver star in a historical true story movie about a duel to the death, and there’s now a musical about Princess Diana. Frank Swietek reviews those and more with Amy & Scott.
ENTERTAINMENT・12 DAYS AGO
AceShowbiz

Paul Webster, the man behind 'Atonement', admits he broke his own rules in funding development and early pre-production when financiers failed to see the power in Pablo Larrain's movie. AceShowbiz - The producer of upcoming Princess Diana biopic, "Spencer", had to sink his own money into the film's pre-production when...
MOVIES・14 DAYS AGO
Elle

How Kristen Stewart Went From Child Star to Leading Lady. Kristen Stewart leaned into modern princess vibes last night at the Los Angeles premiere of her upcoming film Spencer, where she plays the late Princess Diana to much buzz. Stewart stepped out in a black Chanel crop top and sheer skirt adorned with ribbon and lace.
BEAUTY & FASHION・4 HOURS AGO