Tiger King coming back to Netflix for season 2

By Luke Gentile
WashingtonExaminer
25 days ago 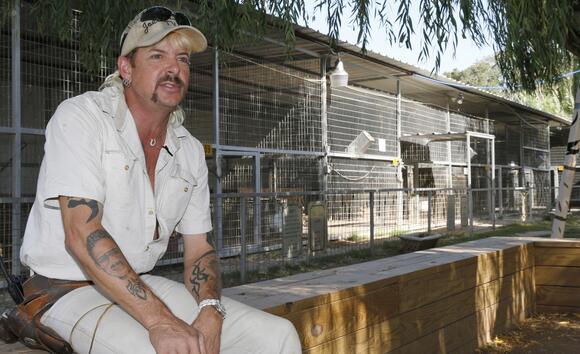 Netflix a nnounced that its show Tiger King is set to return later in 2021.

Season one of Tiger King became popular in the early days of the pandemic when it was released in March 2020.

"Tiger King is coming back this year — and Season 2 promises just as much mayhem and madness as Season 1!" Netflix wrote Thursday on Twitter .

In its first four weeks on the streaming platform, Netflix reported that more than 64 million households tuned in to view the feud between fan-favorite Joe "Exotic" Schreibvogel and Carole Baskin.

The show charted the fall of Schreibvogel, who went from a flamboyant, mullet-bearing country singer, polygamist, and former gubernatorial candidate who operated a tiger enclosure and roadside zoo in Oklahoma to a prisoner serving a sentence for what the show detailed as a murder -for-hire plot surrounding Baskin.

After season one was released, one of the show's producers said another season was possible given the amount of footage available.

"We have a crazy amount of footage," said Rebecca Chaiklin. "There could be a follow-up on this story because there's a lot that's still unfolding in it, and it'll be just as dramatic and just as colorful as what has unfolded these past few years."

No details have been released regarding the second season — only that it will arrive before 2022.

Donald Trump, who claims he never conceded the 2020 election, establishes himself as a former president in his lawsuit against the Capitol riot committee and National Archives.
PRESIDENTIAL ELECTION・6 HOURS AGO
WashingtonExaminer

Trump says he wouldn't need vaccine mandates and would convince people: 'I would sell it'

Former President Donald Trump said he would not have to mandate the COVID-19 vaccine if he were in office but would instead convince people to take it voluntarily.
POTUS・10 HOURS AGO
WashingtonExaminer

FBI Director Christopher Wray assured Rep. Adam Schiff he would resign before being pressured into "something that wasn't right" under former President Donald Trump, the congressman claims in a new book.
WASHINGTON, DC・1 DAY AGO
Popculture

EpicStream News Writer Living in between movies, series, and reality. The NBC series about a plane that disappeared only to return again after five years got the chance to close off its story and in preparation for that, the first three seasons of Manifest are now available online, just before the rise of Squid Game on Netflix, the previously canceled show topped the charts following its revival on the streaming platform.
TV SERIES・6 DAYS AGO
TVOvermind

‘Animal Farm’ is Coming to Netflix…Eventually

There are likely a lot of people that remember this book from high school and can possibly still recall how troubling it turned out in the end no matter how positive it was supposed to be initially. The heroic farm animals that overthrew their cruel human oppressors, only to eventually realize that the leaders they embraced would eventually sell them out to take over and act in the same manner as the oppressors they were liberated from. There are some schools that sought to ban this book for its ideas and story, but while there are plenty of stories out there that some of us don’t like and can’t stand, the truth is that the stories are still important, and valid, until they’re not. But on the lighter side of things, Andy Serkis is going to be bringing this story to Netflix eventually, and it sounds as though Christian Bale has already been tapped for a role, or is at least being approached for it. How this story is going to be received is kind of easy to predict, but the reality is likely going to be at least a little different since this story is a bit incendiary in certain hands, while to others it’s simply a pleasant story.
TV SERIES・11 DAYS AGO
AOL Corp

Netflix's 'On My Block' is back for Season 4. Here's a little preview of what to expect.

Well, the final season of On My Block is here. We've been through so much with the squad, and can never listen to DeJ Loaf's "Changes" ever again. With Season 4 landing on Netflix on Monday, the streaming service released a handy clip to give you a little catch-up of where we left off and a preview of what's to come.
TV SERIES・14 DAYS AGO
asapland.com

Netflix just released the new mission-oriented thriller film Extraction Trailer. In Official Trailer of Extraction, it features Chris Hemsworth. In Phase-3 of the Marvel Unit, he supported till the Avengers End Game. He spent his 9 years with MCU and now he finds out of the box film Extraction. End Game is not the end of MCU, it is Infinity Saga. But Next Phase-4 release has too much time so Chris Hemsworth finds himself in the role of an officer. He will take it as an intense role in the crime thriller genre.
TV & VIDEOS・9 DAYS AGO

Squid Game fans are seeing more evidence that a second season of Netflix's soon-to-be most popular show ever (even surpassing Bridgerton!) may become a reality. Fans were treated to a major cliffhanger in the season 1 finale after the show's main character, Seong Gi-hun (played by breakout star Lee Jung-jae), seemingly challenged the shadowy faction behind the show's titular children's game. Rather than enjoy his lofty ₩45 billion cash prize, it seems Gi-hun is dead set on getting revenge for the atrocities he witnessed during his time on the show's remote island setting — and potentially honoring the memory of Sae-Byeok (Jung Ho-yeon), the scrappy pickpocket who fought hard to be among the final three-game contestants.
TV SERIES・9 DAYS AGO
seattlepi.com

Erik Cowie, the onetime Joe Exotic ally who cared for the animals in his zoo, died of acute and chronic alcohol use, the N.Y.C. Medical Examiner’s office announced Monday. The cause of death was confirmed to Variety by Julie Bolcer at the NYC Office of Chief Medical Examiner. More from...
PUBLIC SAFETY・6 HOURS AGO
darkhorizons.com

Netflix has announced that all 26 episodes of the original “Cowboy Bebop” anime series are set to be added to its worldwide catalogue on October 21st. The original ‘Bebop’, a jazz-centric noir escapist action series about a group of bounty hunters operating across the solar system, has already been available on Hulu, Funimation, and other platforms. It’s unclear if the jump to Netflix will see it removed from one of those competitors.
TV & VIDEOS・5 DAYS AGO
Vulture

Squid Game Is Following the Tiger King Pattern, According to Nielsen

Netflix says Squid Game is off to the fastest start of any new series in the streamer’s nearly nine-year history of originals, but new Nielsen data suggest U.S. audiences took a minute to find the show. According to the ratings giant, the nine-episode Korean drama accumulated a solid — yet relatively modest — Stateside audience of 206 million viewing minutes during its first three days on Netflix, just missing out on a spot in Nielsen’s top-ten lists of streaming-content viewership for the week of September 13 to 19. While that performance may not seem to line up with all the hype surrounding the show in recent weeks, it would be a mistake to read too much into this early snapshot, particularly since plenty of other signals are pointing to Squid Game being a smash.
TV SERIES・4 DAYS AGO

You Season 3 Release Times: Here's What Time It Comes Out on Netflix in Your Country

Joe Goldberg is back! You Season 3 is set to premiere on Netflix on Friday, October 15, and it's promising to be more intense that the shocking Season 2. You Season 3 features Joe and his wife Love Quinn settle into the fictional North California suburbs called Madre Linda with their baby boy, Henry. Sadly, the couple just can't seem to control their murderous tendencies, and it looks like some people are going to get seriously hurt.
TV SERIES・5 DAYS AGO
Deadline

Netflix has renewed multi-camera comedy series Family Reunion, starring Loretta Devine and Tia Mowry-Hardrict, for a 10-episode third season, which will be its last. The series’ writers Adrienne Carter and Arthur Harris have been elevated to executive producers and showrunners for the final season. They are succeeding in the showrunner position series’ creator Meg DeLoatch who will continue to executive produce. Additionally, Robert Prinz will serve as an executive producer for Season 3. Stars Devine, Mowry-Hardrict, Anthony Alabi, Talia Jackson, Isaiah Russell-Bailey, Cameron J. Wright and Jordyn Raya James are returning. Richard Roundtree will continue to recur. The first two seasons of Family...
TV SERIES・13 HOURS AGO
Rutherford Source

Holiday Titles Coming to Netflix in 2021

Whether you like raindrops on roses, whiskers on kittens or Christmas in California, these NEW holiday series and films are sure to become a few of your favorite things. After all, the holidays are (almost) here and Netflix is here for it!. November 1. 🎬 The Claus Family 🇳🇱. November...
TV & VIDEOS・20 HOURS AGO
Primetimer

Netflix teases a "something special" announcement on Wednesday from David Fincher: Is Mindhunter coming back?

"Something special is coming tomorrow from David Fincher...," tweeted the Netflix Film account, prompting fans to speculate that a Mindhunter movie is happening.
TV & VIDEOS・6 DAYS AGO

Leah Remini guested on Ellen DeGeneres' popular talk show Tuesday and called out the host for her responses, accusing her of "acting interested" before hitting her. During her appearance on "The Ellen DeGeneres Show," the "King of Queens" alum got into the Halloween spirit by quipping the 63-year-old host that "it's normal for a parent to scare the crap out of their kids."
CELEBRITIES・13 DAYS AGO
ETOnline.com

Lance Bass is one proud papa! The former *NSYNC singer took to Instagram Sunday to post some photos of his newborn twins, Violet Betty and Alexander James. In the slideshow, Bass shared several photos of the two bundled-up babies, along with a few of him and his husband, Michael Turchin, as they settle into fatherhood.
FAMILY RELATIONSHIPS・1 DAY AGO
Vulture

Halle Berry’s Fighting for Her Life in the Bruised Trailer

Just saying, what if we lived in a universe where Halle Berry can be the first Black woman to win the Oscar for Best Director, too? The first (and so far only) Black woman to win Best Actress continues her career playing badass women who can rescue their sons and fight their demons with Bruised. Berry, who makes her directorial debut with the film, stars as Jackie Justice, an MMA fighter who has to get back in the ring when she regains custody of the son she left behind (introducing Danny Boyd Jr.). Friends, family, even the fighting world has given up on her. “You’re scared?” she asks her kid in the trailer. “I used to be scared, too. Sometimes I’m still scared.” Be very afraid of Berry, who worked with the fight choreographers from John Wick to look worthy of a flyweight championship. Written by Michelle Rosenfarb, the film co-stars Adam Canto, Adriane Lenox, Sheila Atim, Valentina Shevchenko, and Stephen McKinley Henderson. Bruised premieres in theaters November 17 and on Netflix November 24.
MOVIES・4 DAYS AGO