By Abbey White
The Hollywood Reporter
24 days ago 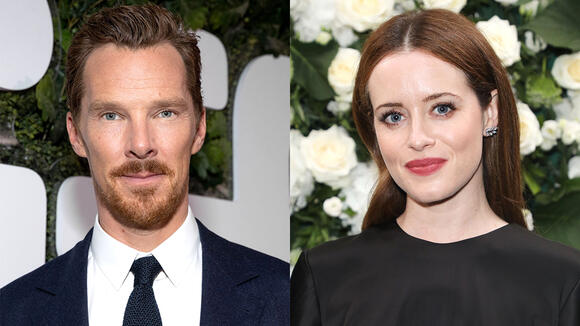 Amazon Prime Video has released the first trailer for its upcoming biographical drama The Electrical Life of Louis Wain , which follows the life and work of a British artist.

The film stars Benedict Cumberbatch as the painter whose work — playful and even psychedelic — helped to permanently alter the public perception of cats. Set between the late 1800s and 1930s, the story follows Wain on his journey of supporting his family and eventually falling in love while capturing the “ridiculous, frightened and brave” nature of cats and their world.

At the trailer’s start, the burgeoning love story between Wain and his family’s governess Emily Richardson (Foy) — punctuated by a comedic scene of Richardson’s own painting work — is woven between sequences of adorable kittens, jumping about and mewing.

But as the trailer goes on, Wain’s desire to unlock the “electrical” mysteries of the world and better understand his own life and love turns dark, as his obsession with felines and his love for Richardson begin to affect his mental health and finances.

“How you’ve managed to conjure images of such delight at such a dark time, I don’t know,” Toby Jones’ mustached character tells Wain.

The film is directed by Will Sharpe, who co-wrote the screenplay with Simon Stephenson ( Luca ), based on a story by Stephenson. The high-profile cast also includes Olivia Colman, Richard Ayoade, Taika Waititi, Nick Cave, Toby Jones and Sophia di Martino.

The Electrical Life of Louis Wain will premiere in U.S. theaters Oct. 22 before heading to Prime Video in the U.S. on Nov. 5.

Benedict Cumberbatch is reflecting on playing a closeted cattle rancher who falls in love with a young man in 1920s Montana in his new movie “The Power of the Dog.” The Oscar-nominated …. Sign up to keep reading — IT'S FREE!. In an effort to improve our website and enhance...
MOVIES・13 DAYS AGO
People

These are balmy times for Cumberpeople. Their beloved Benedict Cumberbatch is starring in three new movies, and his performances in all of them could easily win awards. It is presumably thanks to Covid that the films are arriving all at once, like the proverbial London buses. Each reveals a different side of Cumberbatch, showcasing variously his comedic charm, his sensitivity and even, most unlikely of all, his blunt machismo. One is a spy movie, one is a fey Victorian-era biopic and the other a western. The characters he portrays have nothing in common and yet he seems born to play them all.
CELEBRITIES・9 DAYS AGO
Times West Virginian

For two straight years, film festivals around the world have had to rethink the meaning and method of showing movies to people eager to discover what’s new in the world of cinema. As with 2020, the recently completed 46th annual Toronto International Film Festival was a mix of in-person showings,...
NEWARK, WV・10 DAYS AGO

“He has made the cat his own,” HG Wells once said of Louis Wain. “English cats that do not look and live like Louis Wain cats are ashamed of themselves.”. A hundred years ago Wain was a household name, his instantly recognisable drawings of anthropomorphic cats appearing in books, magazines and postcards.
ANIMALS・6 DAYS AGO
The Independent

Benedict Cumberbatch has revealed the biggest challenge of playing an American rancher in his new film, The Power of the Dog, was learning how to roll a cigarette with one hand while sitting on a horse. Cumberbatch said many of his crew members thought they could give it a go,...
MOVIES・5 DAYS AGO
crowrivermedia.com

Claire Foy will play Sheryl Sandberg in a new drama about Facebook. The 37-year-old actress has signed up to play the organisation's Chief Operating Officer in 'Doomsday Tonight', which will be based on Sheera Frenkel and Cecilia Kang's book, 'An Ugly Truth: Inside Facebook’s Battle for Domination', as well as their work for the New York Times and articles by Andrew Marantz for The New Yorker.
CELEBRITIES・9 DAYS AGO
Deadline

Kirsten Dunst and Benedict Cumberbatch were so deep in character for Jane Campion’s upcoming Netflix thriller The Power Of The Dog that they didn’t speak to each other on set. Speaking at today’s Deadline Contenders London, Dunst described the on-set dynamics as “interesting”, with Cumberbatch relishing the role of Montana rancher Phil Burbank, who takes an immediate dislike to his brother’s (Jesse Plemons) new fiancée Rose (Dunst). “Benedict’s character is a looming figure who slowly infiltrates Rose’s brain and gaslights her,” said Dunst. “She starts strong but he does so much to intimidate her until eventually she becomes an alcoholic.” The film sees Dunst...
MOVIES・8 DAYS AGO

Benedict Cumberbatch and Sophie Hunter attend The Power of the Dog premiere at The Royal Festival Hall on Oct. 11 in London.
MOVIES・5 DAYS AGO
940wfaw.com

LUMIERE FESTIVAL PAYS TRIBUTE TO CAMPION, TANAKA: Lyon, France is gearing up for the Lumiere Film Festival, which will honor the work of Jane Campion. The 13th annual festival celebrates heritage and contemporary cinema in crowded theaters across the city. According to Variety, visitors will be able to hit 440 screenings, ranging from black and white classics by the likes of Luis Buñuel (“Un Chien Andalou,” 1929), Sergueï Eisenstein (“Strike”, 1925) and Julien Duvivier (“La Belle Equipe,”1936) to premieres of highly anticipated films including Campion’s “The Power of the Dog”, Paolo Sorrentino‘s “The Hand of God” and Maggie Gyllenhaal‘s “The Lost Daughter” – all Netflix pics that will be presented by the directors themselves in Lyon. It will also include six films never seen before in France by Japanese star actress-turned-filmmaker Kinuyo Tanaka.
MOVIES・6 DAYS AGO
heyuguys.com

The London Film Festival is in full swing, and last night the red carpet was unfurled for The Power of the Dog at its LFF Premiere. Directed by Jane Campion, the film stars Benedict Cumberbatch, Kirsten Dunst, Kodi Smit-McPhee, Jesse Plemons. It was produced by Tanya Seghatchian, Iain Canning and Roger Frappier.
MOVIES・5 DAYS AGO
The Hollywood Reporter

[This story contains a spoiler for The Many Saints of Newark.] Corey Stoll knows that fans of The Sopranos can be hardcore, so he was somewhat expecting those displeased over the twist in The Many Saints of Newark to approach him on the street with a bone to pick. But, so far, so good. The Hollywood Reporter recently caught up with the TV and film actor to discuss a variety of topics, including the reaction to the David Chase prequel film, in which he played Corrado “Junior” Soprano, what it is like to be on a Netflix show that’s all the rage...
MOVIES・1 DAY AGO

Welcome to Oscar Experts Typing, a weekly column in which Gold Derby editors and Experts Joyce Eng and Christopher Rosen discuss the Oscar race — via Slack, of course. This week, we look at the open Best Supporting Actor race. Christopher Rosen: Hello, Joyce! In this space last week, we tossed around the Best Supporting Actress race — a conversation that is already moot with the news that Caitriona Balfe is going into the supporting race for “Belfast.” We discussed that already *this* week, and both think she very well could win the whole damn thing come spring of next year — a sign of...
CELEBRITIES・1 DAY AGO
TVLine

The Queen of England is taking the reins at Facebook: The Crown vet Claire Foy will play the social networking company’s chief operating officer Sheryl Sandberg in the drama Doomsday Machine, our sister site Variety reports. The series — based on Sheera Frenkel and Cecilia Kang’s book An Ugly Truth: Inside Facebook’s Battle for Domination — explores the relationship between Sandberg and Facebook CEO Mark Zuckerberg, as well as the obstacles the company has faced in its quest for growth. It will begin with the 2016 election and the rise of disinformation, and will include more recent revelations about the XCHECK...
TECHNOLOGY・8 DAYS AGO
atchisonglobenow.com

Jake Gyllenhaal fancied Jennifer Aniston so much it was "torture" doing love scenes with the actress. The pair starred together in 2002 film 'The Good Girl' and the 40-year-old star says it wasn't easy because of his real life crush on the 52-year-old 'Friends' actress. Speaking during an interview with...
CELEBRITIES・11 DAYS AGO
Outsider.com

Lucille Ball’s daughter, Lucie Arnaz, is paying her respects to a beloved cast member that once appeared on “The Lucy Show.”. While Ball was known for her hilarious antics on “I Love Lucy” with Desi Arnaz, she had other ventures after the still-loved sitcom. She starred in “The Lucy Show” from 1962 to 1968 alongside other icons like Gale Gordon and Vivian Vance. Amongst those stars was James (Jimmy) Garrett.
CELEBRITIES・27 DAYS AGO
Slipped Disc

A formidable Lulu has died

The American-born soprano Karan Armstrong has died at 79 in Marbella, Spain. Married to the hyperactive German opera director Götz Friedrich she enjoyed many leading roles in modern operas on the Continent and at Covent Garden. She was the first Lulu I ever saw, a dominant stage persona in Friedrich’s 1970s production, albeit lacking the delicate vocal qualities that others brought to the role.
CELEBRITIES・17 DAYS AGO
Page Six

Pink Floyd co-founder Roger Waters is married for the fifth time at 78 — to a beautiful 43-year-old woman who was his driver. Waters announced on Instagram he has married Kamilah Chavis, whom he has been dating for around five years, posting a series of photos of the happy couple celebrating their wedding in the Hamptons, where he owns a mansion.
CELEBRITIES・2 DAYS AGO
enstarz.com

The royal family, specifically Queen Elizabeth, is rumored to be in a state of stressful preparation for the arrival of Prince Harry and Meghan Markle for their daughter's christening. Did Harry and Meghan really agree to have a reunion with their relatives after leaving the royal family and publicly airing...
U.K.・2 DAYS AGO
thefocus.news

Lili Bernard has made headlines after filing a lawsuit against Bill Cosby accusing him of assault after meeting on The Cosby Show – who was her character Mrs Minifield?. According to court documents obtained by CNN, Lili Bernard has accused Cosby of assaulting her while she was involuntarily intoxicated in or around August 1990 in the Trump Taj Mahal casino resort in Atlantic City, New Jersey.
ATLANTIC CITY, NJ・2 DAYS AGO