By Toni Gonzales
Off the Strip
28 days ago 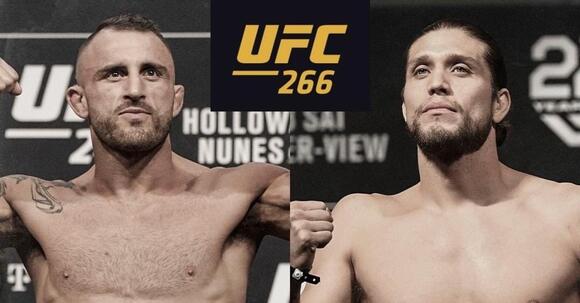 The UFC International Fight Week is officially off and running in Las Vegas. The 9th annual event has just about everything for the diehard UFC fan. Well everything except Joe Rogan who has opted out of the event in order to go hunting. But for those who could not care less about Rogan, or those who are UFC 24/7 there are events scheduled until Saturday’s main event of UFC 266: Volkanovski vs Ortega .

Up for grabs is everything from a two-day fan experience, a Hall of Fame induction ceremony and of course some great fights on the card.

The fan experience will have meet and greets, athlete panels and a Hispanic Heritage Month panel all happening at Beerhaus in the Park. There will be photo ops and an official UFC store at Toshiba Plaza. As for the daily events,  let’s break it down blow-by-blow (pun intended).

Where: Park Theater at Park MGM

Where: The Park & Toshiba Plaza

*Free & open to the public

Where: Ayu Dayclub at Resorts World

Must be 21+. Pool attire required.

Where: Park Theater at Park MGM

* Free & open to the public

* This event is closed to the public, but available for viewing online

Who: All UFC 266 athletes | View The Fight Card

Where: Park Theater at Park MGM (this event is free and open to the public)

This event is free and open to the public.

Where: The Park & Toshiba Plaza

* Free & open to the public

Where: RedTail at Resorts World

Where: Zouk Nightclub at Resorts World

More info can be found on the UFC website.

The post UFC International Fight Week, A Real Knockout For Vegas appeared first on Off The Strip .

It has been a surreal few days in boxing after what can only be described as a fight for the ages in the heavyweight division. Tyson ‘Gypsy King’ Fury knocked out Deontay ‘Bronze Bomber’ Wilder in emphatic fashion last weekend in Las Vegas. Done so after getting decked a couple...
COMBAT SPORTS・8 DAYS AGO
SPORTbible

Dana White has shared his thoughts on Conor McGregor leaking an official UFC document which revealed the huge pay-per-view buys for his rematch against Dustin Poirier. McGregor took to social media to share a UFC receipt, confirming the buy-rate for UFC 257 in January 2021. Per the image, McGregor vs....
UFC・16 DAYS AGO
SPORTbible

A video has surfaced from Saturday night's heavyweight classic between Tyson Fury and Deontay Wilder, which shows the devastating impact of the American's power punches. Fury was victorious in what was an 11 round war for the WBA heavyweight world championship belt, finally getting the better of his 35-year-old opponent with a clean right hand.
COMBAT SPORTS・10 DAYS AGO
SPORTbible

Oscar De La Hoya has reignited his rivalry with Floyd Mayweather by calling out his fellow boxing legend for a lucrative rematch. The 48-year-old boxing legend was slated to make his sensational return to the squared circle against UFC legend Vitor Belfort in September. However, De La Hoya’s comeback at...
COMBAT SPORTS・27 DAYS AGO

Paris Fury has urged former WBC champion Deontay Wilder to walk away from boxing after his devastating defeat to Tyson Fury on Saturday. Wilder was unsuccessful in his bid to avenge his 2020 defeat to Fury and recapture the WBC title in Las Vegas. The 35-year-old KO artist came out...
COMBAT SPORTS・12 DAYS AGO
Daily Mail

REVEALED: Footage proves Deontay Wilder was at fault for referee Russell Mora's longer count on Tyson Fury after he was knocked down because the American was not in a neutral corner – despite MMA icon Daniel Cormier labelling it 'crazy slow'

Deontay Wilder will only have himself to blame for referee Russell Mora's long eight-count over Tyson Fury, when he failed to report to a neutral corner after flooring the Brit for a second time in the fourth round. The Gypsy King was sent crashing to the canvas on two separate...
COMBAT SPORTS・10 DAYS AGO
MMAWeekly.com

Nate Diaz responds to Conor McGregor’s comment that his boxing is piss: ‘I turned you into a wrestler’

Nate Diaz handed Conor McGregor his first UFC loss at UFC 195 in March 2016 and the two have been feuding regularly for the last five years. McGregor defeated Diaz in their rematch by majority decision at UFC 202 in August of the same year, but the rivalry between the Irishman and Diaz still burns bright.
UFC・7 DAYS AGO
ewrestlingnews.com

“The Tribal Chief” is expected to remain at “The Head Of The Table” in the WWE Universe for a while longer. According to a report with a source close to the situation, the word behind-the-scenes in the company right now is that Roman Reigns is expected to remain as the WWE Universal Champion for a while longer, with no plans for him to lose the title at any point this year.
WWE・10 DAYS AGO

They say that anything can happen in the world of professional wrestling, and you never know when a WWE title holder might lose their championship belt. One half of the WWE Women’s Tag Team Champions Rhea Ripley recently took to Twitter to announce that she lost her travel suitcase, which included her gear and her title belt, when she posted the following:
WWE・4 DAYS AGO
Bloody Elbow

Just a year and a half ago, Jake Paul was known to the world as an internet sensation who’d been dabbling in boxing. These days, he’s “The Problem Child” who holds wins over former marquee MMA fighters, one of them being an ex-UFC champion. The 24-year-old does deserve some credit...
COMBAT SPORTS・22 DAYS AGO
SPORTbible

Tyron Woodley was banned from knocking out Jake Paul in their boxing bout, Dillon Danis has sensationally claimed. Woodley made his professional boxing debut against the YouTuber-turned-boxer in August in Cleveland, with Paul emerging victorious via split decision in the eight-rounder. It moved him up to 4-0 in his career...
COMBAT SPORTS・2 DAYS AGO
MMAmania.com

Conor McGregor hates the music industry. To be fair, he also hates the transportation department, wireless phone carriers, and members of AARP, which may explain his public meltdowns over the last few years. It’s a shame we no longer get that same energy inside the Octagon. McGregor was back in...
MUSIC・3 DAYS AGO

Former UFC light heavyweight champion Chuck Liddell has filed for divorce from his wife following a domestic violence arrest earlier this week. Liddell, who is one of the most revered fighters in UFC history, was brought into custody by police on Monday on charges of domestic violence. The incident occurred between Liddell and his wife, Heidi Northcott, at their home in Agoura Hills, California.
UFC・6 DAYS AGO
Daily Mail

Former UFC champion Tyron Woodley 'was FORBIDDEN from knocking out Jake Paul due to a clause in his contract', claims Conor McGregor's training partner Dillon Danis

Tyron Woodley was 'forbidden from knocking out Jake Paul' in his fight contract, claims Dillon Danis. The Bellator welterweight and long-term training partner of Conor McGregor made the outlandish statement and insists it is the reason why Woodley did not finish Paul. Paul, a YouTuber-turned boxer, defeated the former UFC...
UFC・3 DAYS AGO
The Independent

Floyd Mayweather Jr has paid tribute to Deontay Wilder’s former trainer Mark Breland, who was sacked by the heavyweight following the second fight against Tyson Fury.A former welterweight world champion and Olympic champion, Breland was made the fall guy following Fury’s seventh-round knockout win over Wilder in 2020.The Bronze Bomber was furious at Breland for throwing in the towel to end the contest, though many leaped to the support of the 58-year-old for prioritising his fighter’s wellbeing.Mayweather wrote on Instagram: “Please hit the follow button if you want to follow a humble student, teacher, mentor, and coach in the sport...
COMBAT SPORTS・4 DAYS AGO
firstsportz.com

Conor McGregor is non-arguably the biggest MMA star in the world. “The Notorious” one is known for his trash-talking and evil antics both in and out from the octagon. He is currently recovering from a foot injury, but he never fails to make it into the headlines. He recently got...
PUBLIC SAFETY・4 DAYS AGO
MMAmania.com

There is a very real chance that the biggest and most significant fight in the history of women’s boxing will happen early next year.On Saturday night in Newcastle, Savannah Marshall retained her WBO middleweight title to move a step closer to a fight with Claressa Shields. The pair will, in theory, box on the same night in December at the Utilita Arena in Birmingham and then their fight will be announced. Both are world champions, both unbeaten as professionals and Marshall is the only person to have ever beaten Shields. They met at the world amateur championships in 2012; Marshall...
COMBAT SPORTS・2 DAYS AGO
firstsportz.com

“He weighs my left leg,” Throwback to when Conor McGregor received a warning from WWE star Brock Lesnar

Conor McGregor has never been the friendliest man on the planet. The Irish UFC superstar pissed off a lot of people during his come up and WWE superstar Brock Lesnar was one of them. In 2016, Conor McGregor made some insulting comments about the WWE organization and the athletes that...
UFC・2 DAYS AGO
MMAmania.com

Floyd Mayweather vs. Jake Paul in a professional boxing match might be a reality if the YouTuber-turned boxer gets his way. Paul (4-0) has laid down the challenge to Mayweather (50-0), under the condition the two meet in a professional boxing match. Paul is coming off a split decision win over former Ultimate Fighting Championship (UFC) Welterweight titleholder Tyron Woodley (watch highlights); meanwhile, Mayweather out-performed Jake’s older brother Logan Paul (highlights here) in an eight-round exhibition.
COMBAT SPORTS・17 DAYS AGO