Report: Red Sox Have Been Given OK To Wear Yellow Uniforms In Playoffs 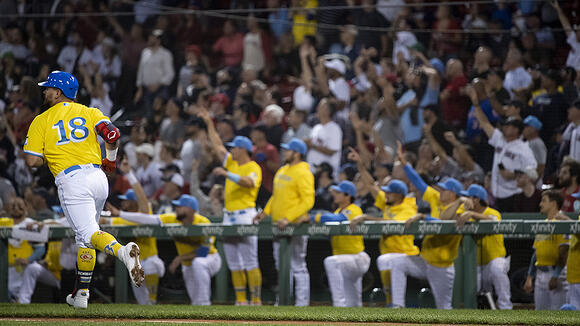 BOSTON (CBS) — When the Red Sox unveiled their yellow and blue “City Connect” uniforms earlier this season, the fanbase was pretty split over the special edition garbs. But now that the team has won five straight while going yellow — and seven straight overall — fans are a little more receptive to the unis.

The Red Sox were only going to wear the Boston Marathon-themed uniforms for last weekend’s series against the Baltimore Orioles, the start of the team’s final homestand of the season. But when they swept the O’s, the Sox decided to keep wearing them when the New York Mets came to town for a two-game set on Tuesday. After taking both of those games, you better believe the Sox will be yellow again when the New York Yankees come to town Friday for the final home series of the regular season.

Players are loving the uniforms, even though yellow and blue doesn’t exactly scream “Red Sox.” Even notorious alternate uniform hater/shredder Chris Sale is on board after he picked up the win Wednesday night against the Mets. It’s reached the point where Boston players would be disappointed if the unis weren’t hanging in their lockers come game day.

If that is the case, and the Red Sox are still feeling lucky in yellow, then there’s a good chance they’ll be wearing those special unis for the win-or-go-home playoff game. According to WEEI , the Red Sox will be allowed to wear their City Connect uniforms in the postseason, via an MLB spokesman.

The Sox have outscored opponents 59-26 during the team’s win streak, and 47-18 in the yellow and blue uniforms.

And though we don’t want to get too far ahead of ourselves, it should be noted that both AL Divisional Round series will be in action on October 11, which is Marathon Monday in Boston.

If the Boston Red Sox are going to take down the New York Yankees in the American League Wild Card Game tonight, they’ll need to do it without star slugger J.D. Martinez. Martinez was not included on Boston’s roster for the AL Wild Card Game due to a sprained left ankle. He suffered the injury in the fifth inning of Boston’s regular-season finale on Sunday.
MLB・16 DAYS AGO
ClutchPoints

The New York Yankees flamed out of the 2021 MLB postseason after getting wrecked by the Boston Red Sox in a 6-2 American League wild-card game loss at Fenway Park on Tuesday. The Yankees crashing and burning against their fiercest rival and despite a luxurious payroll only add fuel to an offseason that’s going to have them answering plenty of questions, including whether the team’s future would still include veteran outfielder Brett Gardner — at least until the end of the 2022 MLB season.
MLB・15 DAYS AGO
FanSided

Boston Red Sox fans let Kyle Schwarber have it for letting a pop-up land on the infield, and he probably had it coming. If you let Schwarber play first base long enough, something like this was bound to happen. The Sox knew this when they acquired him from the Washington Nationals, and they sure as hell didn’t trade for him because of his defensive ability.
MLB・27 DAYS AGO
USA TODAY

Upbraided by his manager on national television, Red Sox pitcher Eduardo Rodriguez struck a remorseful tone after he mocked the Astros' Carlos Correa.
MLB・2 DAYS AGO

Jose Altuve was targeted by Boston Red Sox fans with a profane chant during Game 3 of the ALCS at Fenway Park on Monday night. Red Sox fans could be heard chanting, “f— Altuve” during Game 3. The chants began early in the game, according to reporters in attendance. The chants continued even in the third inning after Altuve was unable to pick a throw that bounced into second while covering the bag.
MLB・3 DAYS AGO
NJ.com

To err is human. And no doubt Joe West has made his fair share of mistakes during his four decades a big-league umpire. During Sunday’s game between the New York Yankees and Boston Red Sox, the Boston Globe’s Pete Abraham tweeted the following:. Joe West on the plate tonight. He...
MLB・24 DAYS AGO
Larry Brown Sports

Alex Cora has generally made very good managerial decisions with his Boston Red Sox this year. But he made one terrible decision in Game 5 of the ALCS on Wednesday that backfired. The Houston Astros entered the top of the sixth leading 1-0 on a second inning home run by...
MLB・1 DAY AGO
CBS Boston

BOSTON (CBS) — One of the Red Sox’s youngest fans stole the show at Fenway Park on Monday night. Five-month-old Giovanni, who is now known as “Fenway Baby,” had fans cheering. Mom Kaitlyn and Dad Antonio Cali say this wasn’t baby Giovanni’s first game, but it was the most memorable so far. “When we were in the row, we had a great presence behind us, we had a great group of people behind us, they were super, super nice,” Antonio explained. “Right around the fourth, they started chanting ‘we want the baby.'” “We’re dancing and we just held him up like, ‘hey, here’s...
MLB・2 DAYS AGO
CBS Boston

By Michael Hurley, CBS Boston BOSTON (CBS) — The pitching situation for Dusty Baker and the Houston Astros has gone from bad to worse in an instant. After using eight pitchers in Game 1, five pitchers in Game 2, and six pitchers in Game 3, the Astros’ pitching staff is a bit taxed. That’s what happens when you get 5.1 combined innings from your three starters. As such, Baker is calling upon Zack Greinke to start Tuesday night’s Game 4 at Fenway Park. And it feels like more of a Hail Mary than anything else. “Just as long as he can go,” Baker said when...
MLB・2 DAYS AGO
chatsports.com

Red Sox at Rays lineup: Playoff Chris Sale, in the nick of time

The Red Sox look to even up their ALDS showdown with the Rays behind Chris Sale tonight in St. Pete (7:02 p.m., FS1). Last night was a disappointment, but sometimes you just lose a game. In the Shakespearean words of the Sox Outsider, OTM alumnus Matthew Kory, that game was a “huge dud,” and there’s not much point in reliving it. So we pointedly will not do that.
MLB・13 DAYS AGO

It's a special Monday in Massachusetts with the 125th Boston Marathon taking place and the Boston Red Sox having an opportunity to eliminate the Tampa Bay Rays from the MLB postseason in Game 4 of the American League Division Series. Which jerseys should the Red Sox wear tonight at Fenway...
MLB・10 DAYS AGO
chatsports.com

Red Sox 0, Rays 5: The series could have started better

I hesitate to say this was just one of those nights where the Red Sox couldn’t catch a break and the Rays did, because that makes it seem as though the Rays got lucky. They didn’t. They played a great game, showing off their preposterous defensive positioning prowess as well as a great young core with Randy Arozarena, Wander Franco, and Shane McClanahan all playing huge roles in this win. But at the same time, the Red Sox had more hits, but just never seemed to get that one extra hit for the inning they needed to put runs on the board.
MLB・14 DAYS AGO
CBS Boston

BOSTON (CBS) — Laz Diaz made a strike call so bad on Tuesday night that he let Alex Cora come out and scream about it without ejecting the Boston manager. If only Cora and Boston knew what was to come later on in the evening. In the top of the ninth inning, with Game 4 of the ALCS between the Red Sox and Astros tied at 2-2, Nathan Eovaldi was looking to pitch out of his own jam and end his relief appearance with a curveball to pinch hitter Jason Castro. Eovaldi threw the perfect pitch, and he began his walk to...
MLB・1 DAY AGO

Red Sox moving on in playoffs after win against Tampa Bay

BOSTON, MA (WGGB/WSHM) -- Western Mass News is your Local Sports Authority. It’s a major sports day in Boston after the 125th running of the Boston Marathon, the Red Sox cap off the night with a playoff game that could advance the team to the next round of the postseason.
MLB・10 DAYS AGO
ESPN

BOSTON -- The chants at Fenway Park during this Red Sox playoff run echo in your mind. When Gerrit Cole struggled through the AL Wild Card Game, failing to make it past three innings, Boston fans made chants of "GERRIT!" ring through the crowd. When Rays outfielder Randy Arozarena ran out to right field, Red Sox fans in the bleachers let him hear it with chants of "RANDY!" (He tipped his hat in response.) After Luis Patiño gave up a game-winning home run to Christian Vazquez in Game 3, fans greeted him pre-game in Game 4 with jeers, leading the Rays pitcher to blow kisses to the crowd. When Patiño later entered the game -- facing Vazquez -- the Fenway crowd echoed a jeer from annals of Red Sox history.
MLB・10 DAYS AGO
New York Post

Good morning! Early start Sunday. Jets and Falcons in Old England before we turn our attention to Game 3 between the Rays and Red Sox in New England. The series moves to Boston tied at 1-1. Tampa Bay’s Drew Rasmussen (4-1) will be making his first career postseason start. Rasmussen has appeared in 35 games this year, making 10 starts. Drew has been solid in pitching 76 total innings, losing just once.
MLB・11 DAYS AGO