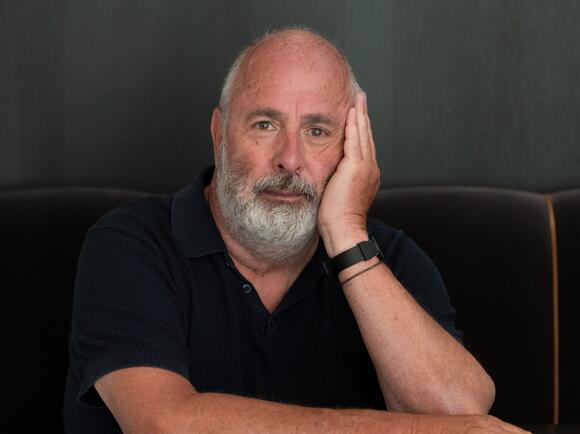 Director Roger Michell, whose films include "Notting Hill" and "My Cousin Rachel," has died, his publicist told PA news agency. He was 65.

"It is with great sadness that the family of Roger Michell, director, writer and father of Harry, Rosie, Maggie and Sparrow, announce his death at the age of 65 on 22 September," his publicist said.

A cause of death is not publicly known.

The South African-born director was known for his work in movies, TV, and theatre. Michell began his career in the late 1970s at the esteemed Royal Court Theatre and followed that in the mid-1980s as the resident director at the Royal Shakespeare Company for six years.

His first on-screen directing credit was the 1995 made-for-TV adaptation of Jane Austen's "Persuasion" for the BBC. It found great acclaim and won a BAFTA Award.

“We’re doing a lot of looking back to reevaluate missteps and to be able to talk about people like Britney Spears and Brittany Murphy, who have been victimized by Hollywood, by the gossip industry,” Hill tells Variety. “Having to look back at what our role is in all of that [is] giving these women an opportunity to reclaim their voices.”
MOVIES・12 DAYS AGO
The Guardian

While at the RSC Roger Michell directed Temptation by Václav Havel, whose work had been banned in Czechoslovakia since 1969. Michell had been able to go through the text in detail with the writer, who was under surveillance in Prague. At the end of the Stratford run in 1987 Michell...
ENTERTAINMENT・13 DAYS AGO
Variety

Welcome to this week’s “Just for Variety.” Wonder Woman approves of Robert Pattinson as the new Batman and Zoë Kravitz as Catwoman! “Rob looks amazing,” Gal Gadot told me last night at Elle’s Women in Hollywood event at the Academy Museum when I asked if she had seen the new “The Batman” trailer. “I love his voice and I love the whole tone of everything. “And I love Zoë. She looks incredible. She’s a sweetheart. She’s a talented woman,” she continued. “And I’m so happy to have another female as a comrade.” So when does Gadot think we’ll see an all-female superhero movie with...
MOVIES・6 DAYS AGO
The Hollywood Reporter

Having already told the story of Oscar Wilde’s time in Paris in 2018’s The Happy Prince, noted British actor, director and author Rupert Everett is set to turn the lens on his own period in the French capital. Lost and Found in Paris will dive into the hedonism, seduction and intrigue of 1970s Paris, with Everett set to direct from his self-penned screenplay, based on his own true-life experiences. Kit Clarke, the rising star of Get Even and Leonardo, will play Everett’s younger self: an unruly teenager sent by his exasperated parents to live with a Parisian socialite family to learn French...
MOVIES・2 DAYS AGO

18 celebrities who were born on Halloween

What do Willow Smith, Ron Rifkin, Marcus Rashford, and Vanilla Ice all have in common? They were all born on October 31.
CELEBRITIES・3 DAYS AGO
TIME

The 19 Most Underrated Movies on Netflix

Angelenos weathered a cold and blustery Monday as temperatures dipped into the 50s and rain fell across the southland, conditions that seemed rather fitting for a premiere of a film set in London. And it did not go unnoticed. Standing on stage inside the Academy Museum’s David Geffen Theater just before 8 p.m., Focus Features’ Peter Kujawski jumped at the chance to connect gray skies to Edgar Wright’s Last Night in Soho. “I hope you guys noticed that we spared absolutely no expense in importing the London weather for everyone today for the full authenticity of the experience,” quipped the chairman,...
MOVIES・13 HOURS AGO
purewow.com

If you were a child in the early 2000s (or if you had one), you may have watched a few selections from the Barbie animated film series, like Barbie of Swan Lake ﻿or Barbie as the Princess and the Pauper. And if not, you may have seen the iconic doll come to life in Toy Story 3.
MOVIES・3 DAYS AGO

Cartoons, silent movies, and stories about some of our most celebrated stars pack the pages of the memoir "Star Struck: My Unlikely Road to Hollywood." Along the way, you'll learn how Leonard Maltin went from fan boy, to respected film critic, interviewer, teacher, host and show biz historian.
MOVIES・14 HOURS AGO
IndieWire

Kristen Stewart has a self-deprecating approach to her career spanning more than 50 films, and that took flight with the release of the “Twilight” franchise. The actress, now an Oscar contender for her turn as Princess Diana in Pablo Larraín’s upcoming festival favorite “Spencer,” spoke to the Sunday Times (via Yahoo) about her body of work, which since breaking away from “Twilight” has long been revered by critics. (And there’s of course her legion of “Twilight” fans, too.) Stewart, who has starred in films from directors like David Fincher and Woody Allen, said that choosing roles can be a “total crapshoot.”...
MOVIES・2 DAYS AGO
Deadline

EXCLUSIVE: Emma Roberts (American Horror Story, Nerve), John Gallagher Jr. (Peppermint, The Newsroom) and two-time Oscar nominee Michael Shannon (Nine Perfect Strangers, Knives Out) will topline Spencer Squire’s first feature, Abandoned, which is also the first to be fully financed through the partnership between Vertical Entertainment and Three Point Capital. The recently wrapped thriller written by Squire, Jessica Scott, and Erik Patterson follows a mother, father, and infant son as they move into a remote farmhouse, which harbors a dark, tragic history. As their home’s past is revealed, the mother’s fragility escalates to a state of psychosis that jeopardizes her own...
MOVIES・21 HOURS AGO
GeekTyrant

We are a couple of years out from the end of the first three phases of the Marvel Cinematic Universe, also known as The Infinity Saga that culminated with Avengers: Infinity War and Avengers: Endgame. The two films dealt with the villain Thanos and his goal to eliminate half the universe so that resources would plentiful instead of scarce for the remaining beings. After Thanos succeeded in Infinity War, the Avengers dealt with the aftermath, ultimately reversing the snap, and restoring what the universe lost.
MOVIES・5 DAYS AGO

In the late ’80s, Jeffrey Wright was finishing up his studies at Amherst College, dividing his time between acting, lacrosse, and a political science degree. In the midst of all that, he got the chance to study with James Baldwin. The writer was a literary icon by the time he arrived at the liberal arts college to teach in the humanities department, and Wright landed a spot in Baldwin’s lecture. But Wright had so much going on that he never actually made it to any of the classes, and Baldwin died a few months later. “It was one of the biggest regrets...
MOVIES・18 HOURS AGO
The Hollywood Reporter

Timothée Chalamet enjoyed a successful doubleheader at the domestic box office over the weekend as two of his high-profile films opened to strong numbers: Dune and The French Dispatch. Dune in particular is another defining moment for the young actor. The sci-fi epic, from Warner Bros. and Legendary, marks the first time Chalamet has played the lead role in a major Hollywood studio tentpole. “I think we’ve only begun to scratch at the surface of his unique talents,” Legendary’s vice chairman worldwide production Mary Parent told The Hollywood Reporter on Sunday. “He’s a legitimate movie star, and has that intangible thing that...
MOVIES・1 DAY AGO
thedigitalfix.com

Good news, Deadites, the next Evil Dead movie is now done filming. Director Lee Cronin shared a post on Twitter about being done with principal photography on the horror movie, and now it’s onto editing and post. Cronin included several images, with his face cover in fake blood, a bloody...
MOVIES・20 HOURS AGO
The Hollywood Reporter

Anya Taylor-Joy on Why She Opted to Sing A Cappella in ‘Last Night in Soho’: “It Adds Vulnerability”

Although Anya Taylor-Joy sang a few bars in Emma and during the live-action opening of the animated Playmobil: The Movie, the actress says filmmaker Edgar Wright offered her the part of aspiring singer Sandie in his Last Night in Soho before confirming with his own ears that she could carry a tune. “The first time he properly heard me sing was when we were doing the scene, and he was so gracious because he understands how I feel about characters,” explained the 25-year-old on the red carpet at the film’s Monday night premiere on a rainy night in L.A. The scene...
MUSIC・17 HOURS AGO
The Hollywood Reporter

Dr. Crane and Mrs. Hughes are joining forces. Frasier star Kelsey Grammer and Downton Abbey‘s Phyllis Logan are uniting for high concept thriller No Way Up, being introduced to buyers at next week’s American Film Market by Altitude Film Entertainment. Described by the filmmakers as a “rollercoaster combination of disaster movie and survival thriller,” No Way Up follows two characters from very different backgrounds that are thrown together when the plane they are traveling on crashes into the Pacific Ocean. The stricken airliner comes to rest perilously close to the edge of a bottomless ravine with the surviving passengers and crew trapped...
MOVIES・5 HOURS AGO
kiss951.com

Kelly Clarkson caused a stir when she posted a picture of herself via Instagram on the set of The Voice in a short black dress with a big silver zipper. Fans immediately started to comment on her look. Most fans said she looked “beautiful” and called her “gorgeous,” but one...
CELEBRITIES・6 DAYS AGO
nickiswift.com

Before becoming the Duchess of Sussex, Meghan Markle initially rose to prominence through her time in Tinseltown. Starring as Rachel Zane in USA Network's "Suits," the former actor appeared in the show's first seven seasons before uprooting her life for royalty. She has also made appearances in prominent programs such as "90210," "CSI: NY," and "CSI: Miami," along with film appearances in "Get Him to the Greek" and "Horrible Bosses."
CELEBRITIES・14 DAYS AGO
HollywoodLife

Shiloh Jolie-Pitt, 15, Looks So Much Like Dad Brad Pitt On Red Carpet With Mom Angelina & Zahara, 15

Shiloh looked gorgeous in a velvet black cocktail dress, looking every bit like a movie star! The teenager sweetly held hands with mom Angelina on the red carpet for ‘The Eternals.’. Shiloh Jolie-Pitt, 15, was the belle of the ball at the 16th Rome Film Festival! The blonde looked so...
LOS ANGELES, CA・2 DAYS AGO